Who would've thought I would agree to waking up at an unearthly hour at 6.30AM to defy gravity by swinging from tree to tree? How about walking in a zig-zag position on nothing but strips of wooden planks suspended more than 70metres in the air?

Yup, I chose to have that moment of exhilaration over my beauty sleep. It better be worth it! For my long-time readers out there, yall would know that I completely detest mornings.. make that VERY EARLY MORNINGS. I would yank the covers over my head and bury my head under the pillow if I didn't see a dire need to wake up early. 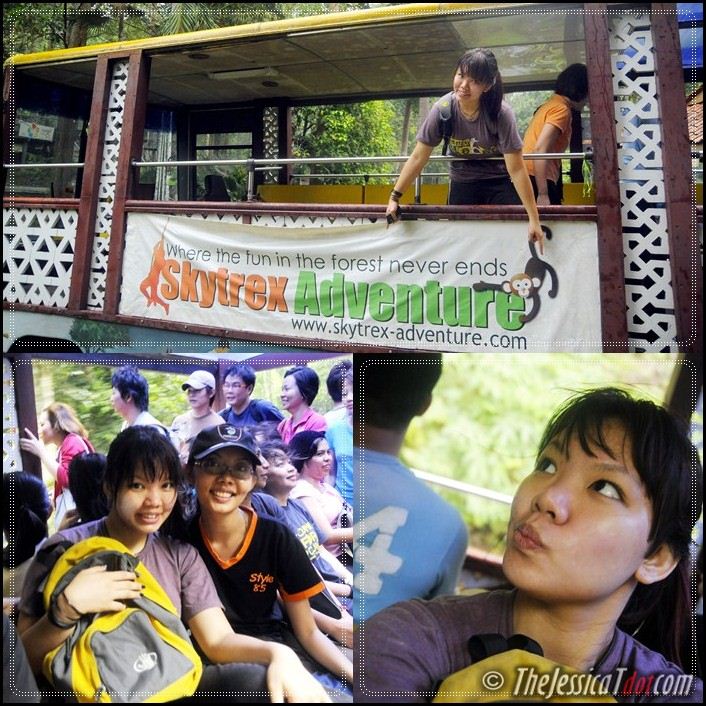 So by invitation courtesy of Visiber, off I went up the hill in Shah Alam to put my Sky Trekking skills, stamina and durability to test 🙂 Thanks guys! Hopefully I won't break a bone or come crashing down to the ground 70 feet below. That's what safety nets are for by the way

Okay.. now for the gloves… 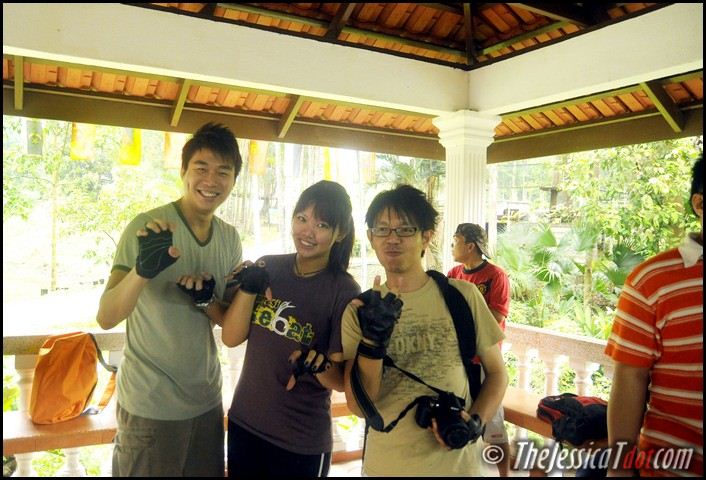 Upon choosing the Big Thrill Adventure (there was a Little Adventure and an Extreme Challenge Adventure), we were briefed by the instructors about what to expect and got our *stinky* gloves from the deck 🙂 Okay lah, it wasn't stinky. If you didn't buy a new pair at RM5, then you'll get the stinky ones 😀 Hint : BRING YOUR OWN

I did the Big Thrill challenge okay! Don't play play 😀

Was initially confident that it was gonna be easy peasy lemon squeezy since I used to be an athlete back in high school AND go to the gym often. But when I saw this….. 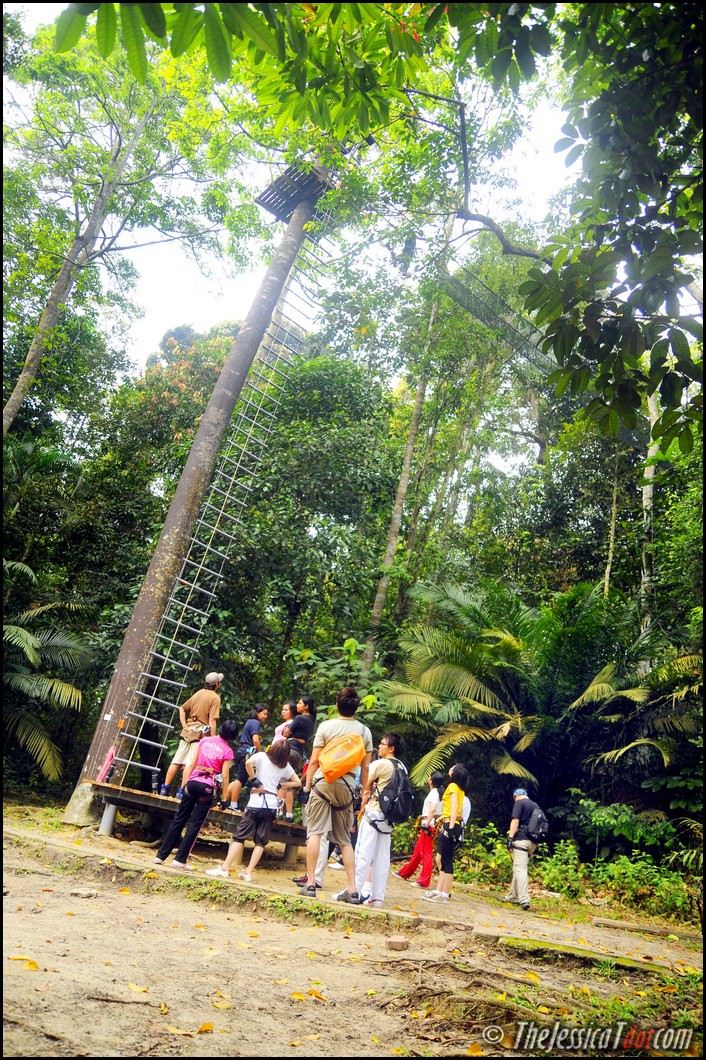 Am i supposed to climb that thing with my bare hands? Where's Tarzan and his vines?

So I brushed that thought aside, and headed off to the Gear-Up deck with Fong Mei to get our harnesses, hook & pulleys, carabineer and V Landyard. Yeah, it's prolly jargon to you as it was to me on that very morning but hey, didn't you just learn something new? 😀 😀 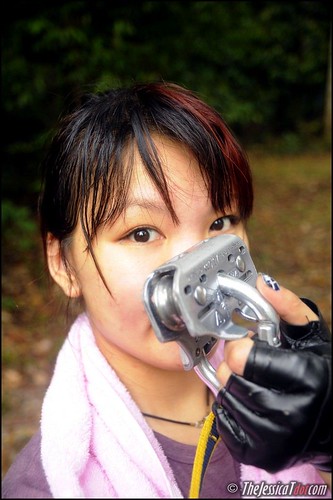 This is a carabineer!

If you don't have this you won't be able to swing from tree to tree! 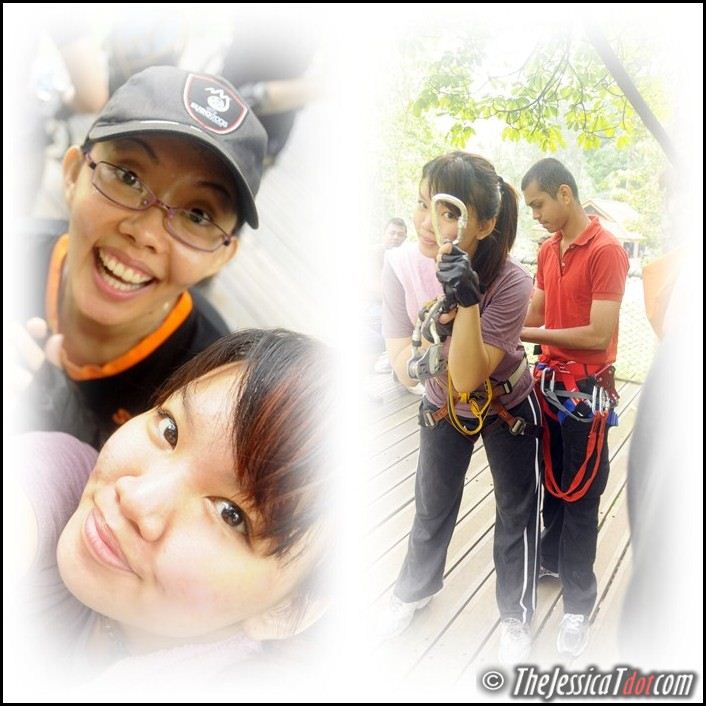 Getting harnessed up with the equipments hanging around me

It was good to know that the peeps at Skytrex-Adventure were really well trained. Safety first! They made sure our harnesses were well fastened and even let us go on a dry run before the real deal 🙂 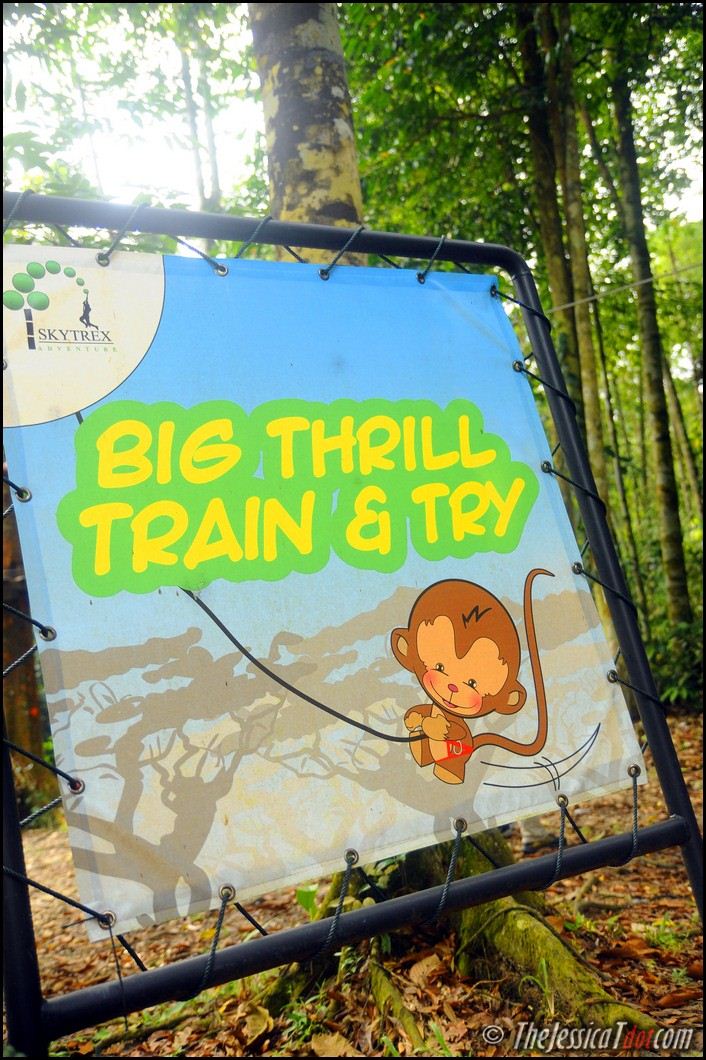 You'd just bump your head and not break your ribs

So after I passed the "test", it was time to face the trees. I did lots and lots of warming up – lest I get a leg cramp right up there and no one can save me even if I screamed my lungs out or made smoke signals! Okay, time to proceed the beginning stage of our adventure! 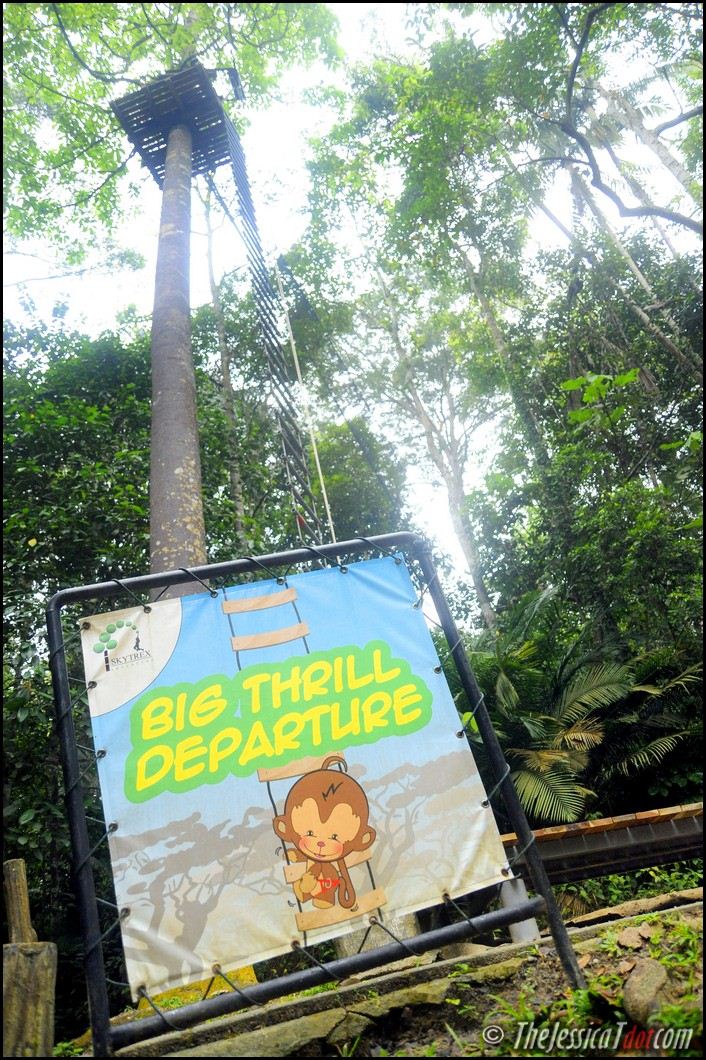 The participant would have to be able to climb that tree to get to the top of where the challenge begins. But it was pretty tiring before it began! I had to stop twice in the midst of climbing it because it was one hell of a loooooooong way up, trust me.

When I *finally* reached the top, there was a net which I had to cross next! As I was walking across the net, the net kept wobbling & swaying left and right. Gosh! It was pretty freaky but glad that the net was really sturdy. I bet it can withstand the weight of 3 elephants too 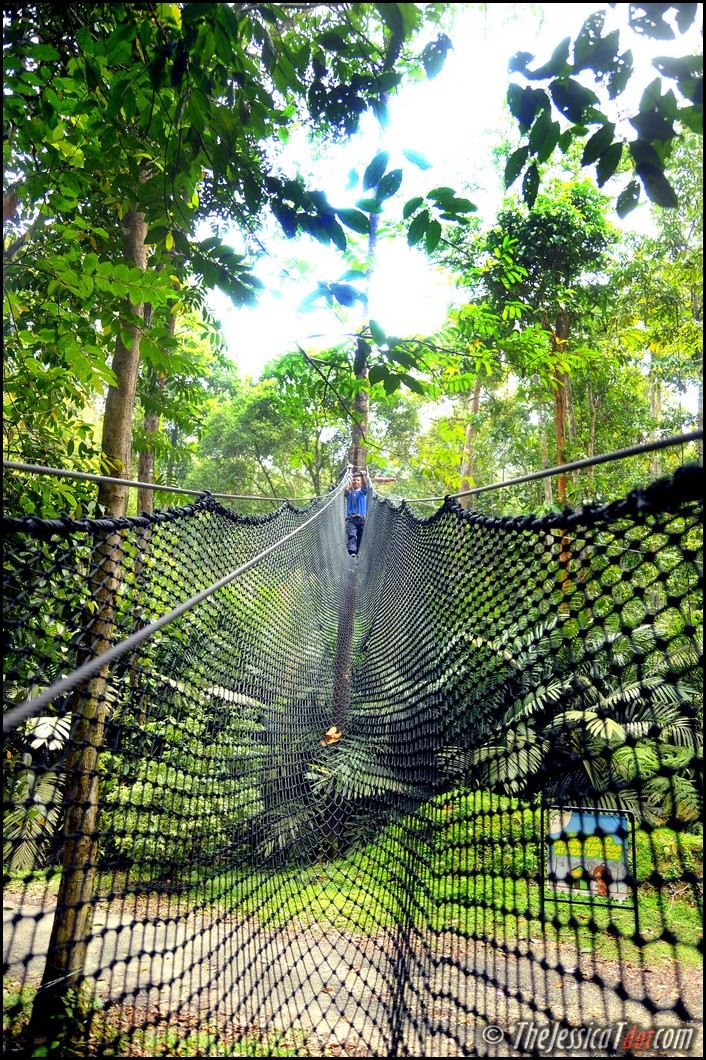 Shot when I finally reached the other side 😀

There were a few other challenges we were supposed to be up against, before it became repetitive with different difficulty levels. There was this part where I had to 'walk the plank'! Can't believe there was no support except the suspended planks and well, the strength of your arms! 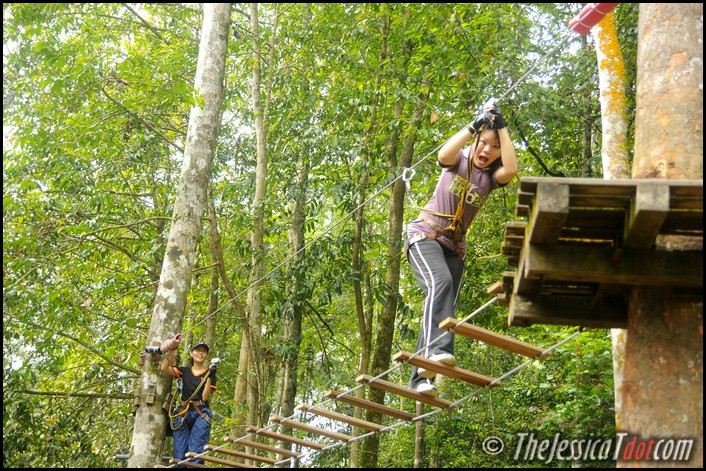 Once that was done, I was excited to know what lies ahead! 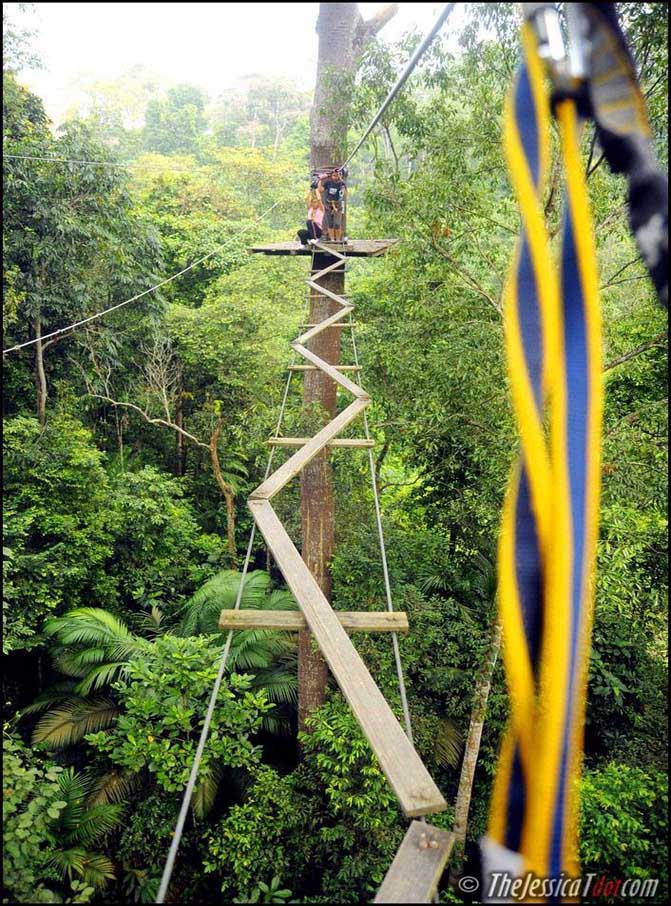 I was terrified! My voice quavered with fear when I yelled "WHAT NOW?? HOW?" Like seriously, I didn't know how I could finish walking that without having my heartbeat thump right outta my rib cage. But I managed – finally.

BUT THAT WAS NOT ALL!

There was round two. This time, MUCH HIGHER! 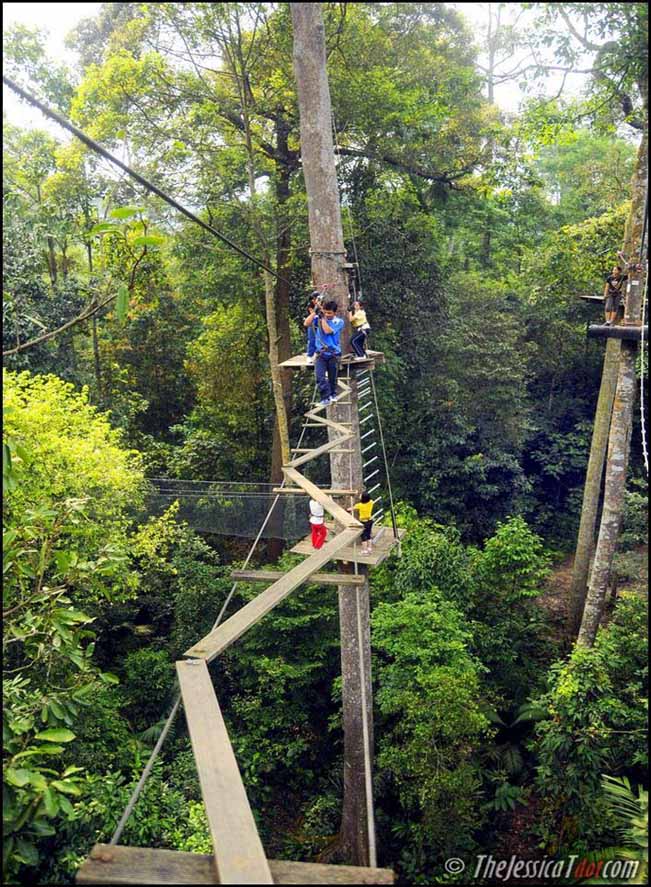 But the worst was yet to come. You wonder how circus acts do their thang on the tight rope? Well, stop wondering and try it for yourself. No joke! Take a look – 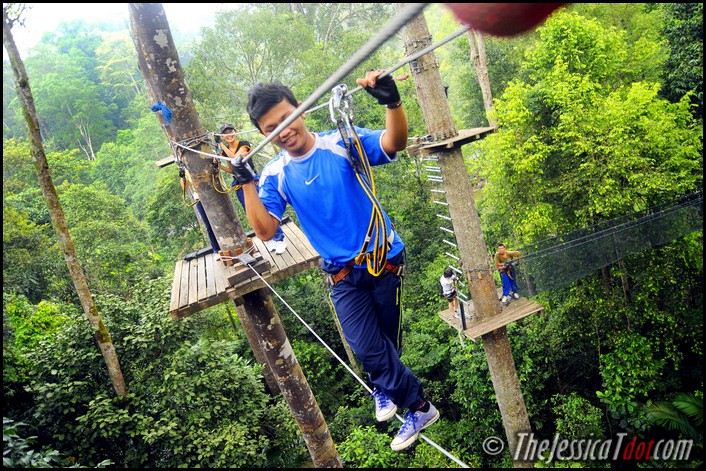 HOW TO WALK LIDDAT!!!

but in the end everyone managed to 🙂 Isn't that always the case?

Okay here's something you should know actually. You ain't supposed to bring anything up except yourself and your water bottle. But being me, I obviously didn't give two hoots and brought my DSLR climbing with me all the way up anyway. Yes, you read right. I lugged my DSLR from tree to tree.

IF NOT HOW TO TAKE PICTURES AND BLOG FOR YALL TO SEE? 😛 😛 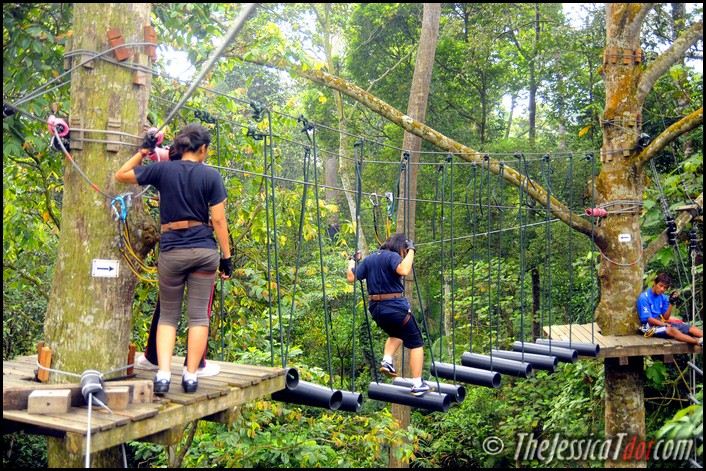 We had to cross to the other tree on top of those slippery rubber tubes! Each time you step on one, the whole thing will shake vigorously! Hmm.. I guess they didn't set the maximum weight at 100KG for nothing. LOL But I hated this part the most! You're so frightened yet you can't close your eyes entirely 🙁 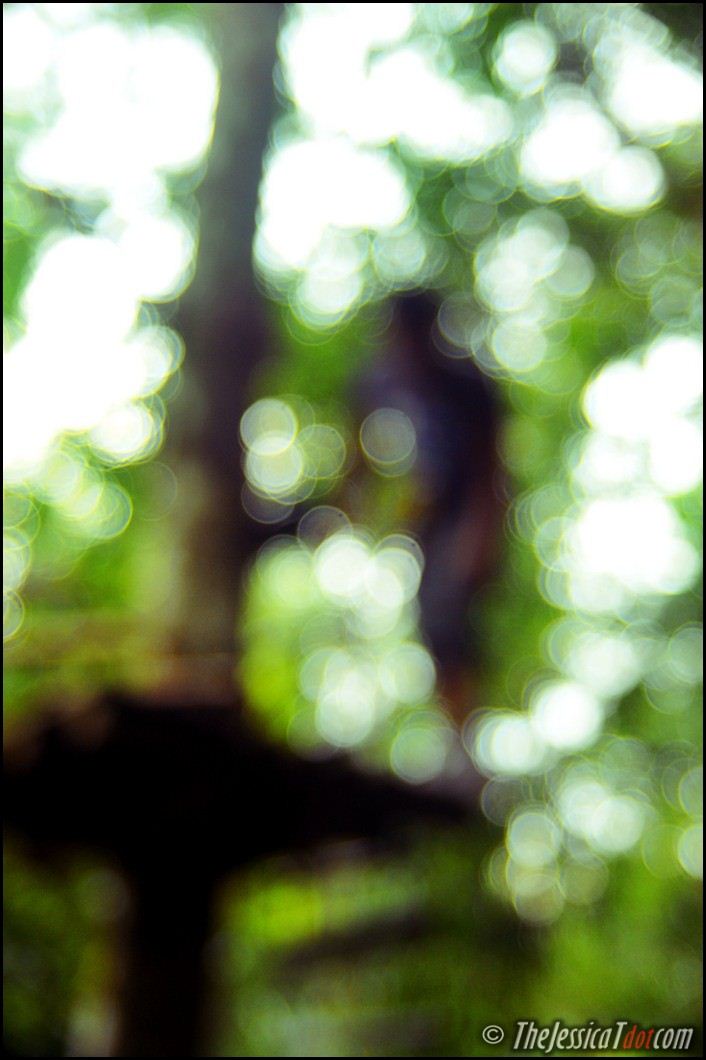 Are we done yet? Can I peek now?

Okay if you didn't already know, I didn't exactly put the challenges in order. I saved the best for last! The ultimate flying fox! If I'm not mistaken, I did the flying fox at least 5 times. There were 5 plusminus altogether but with different heights and different distances. 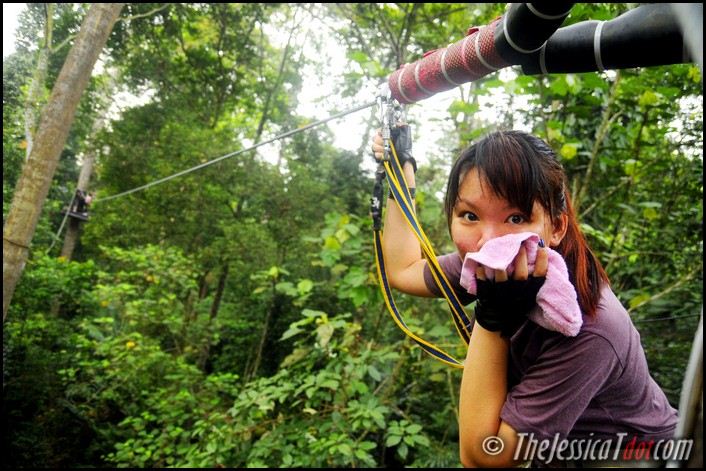 There's no way up nor a way down. Ya just gotta do the Na'vi call for the bird

if Tarzan's quick enough, he'd prolly get to you first

So hold on tight, shut your eyes, let yourself accelerate and  free fall diagonally downnnnnnnnnnnnn! 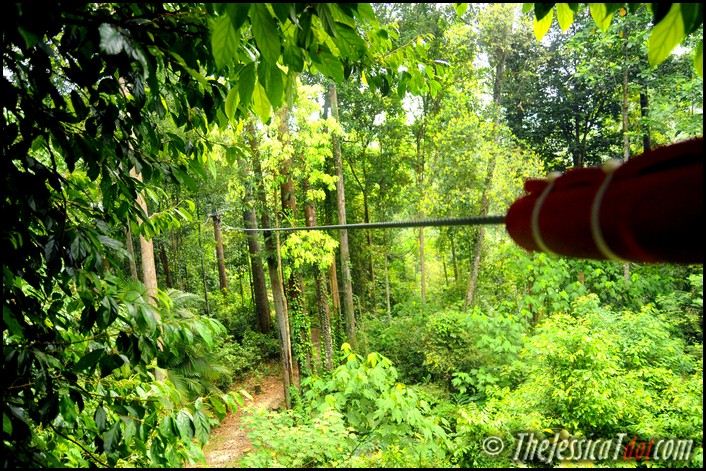 Repeat this a few times and there was one that lasted for a whole 30 seconds!

How far is that! Woots!

When it was all over, I was exhausted! The shots that you see in this post is prolly only a quarter of what you're gonna expect in the Big Thrill adventure! There was so much more climbing, swinging, balancing and gliding throughout the entire track. I was parched because I chose to bring my DSLR instead of a good bottle of water.

But so what! I gulped down gallons and gallons when we got down to the party deck! 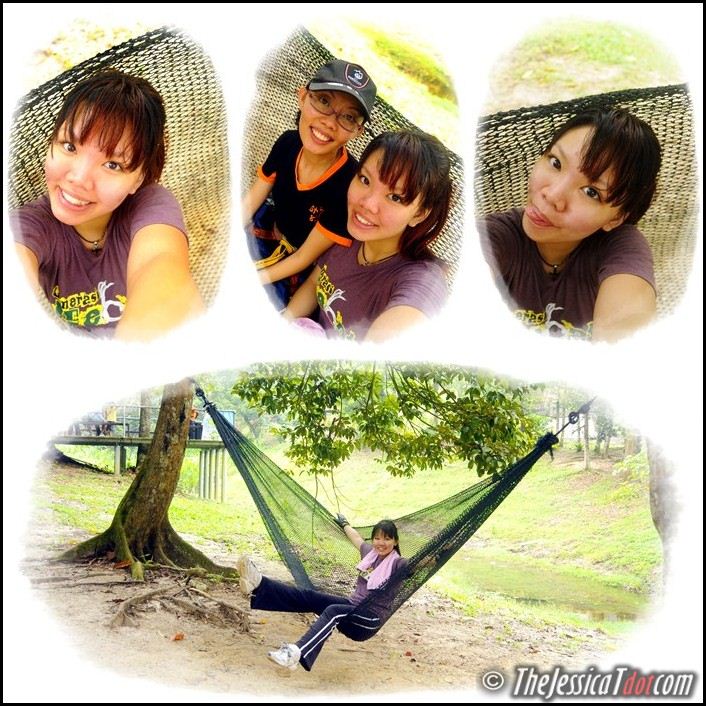 Oh and it's my first time sitting on a hammock btw 😀 😀

You don't see that very often!

So.. ready to defy gravity for yourselves now?