Bringing the BRATs around the streets of Penang with the rest of The Star team!

As most of you would have already known, I returned as a Senior BRAT to help the organizers facilitate and run this year's batch of The Star BRATs workshop in Penang. A very short stint in a very familiar ground for me… 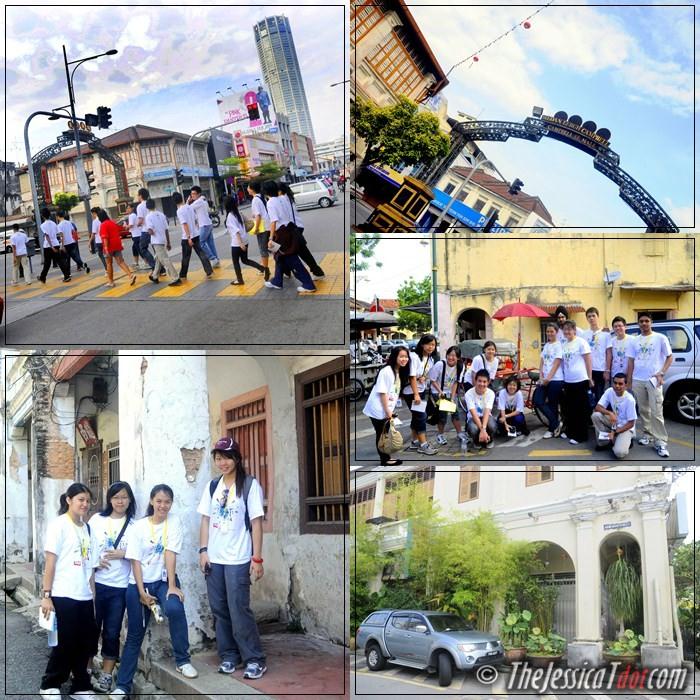 It felt like ages since I last stepped foot on the Pearl of the Orient ever since I began my solo voyage to the city KayElle in late 2008. Heh.. sounds pretty dramatic but yeah, finally.. I'M HOME! Everything around me seemed the same ol' same. The streets, the infrastructure, the people, the culture.. some stalls apparently, had vanished. Relocated to gawd-knows-where! 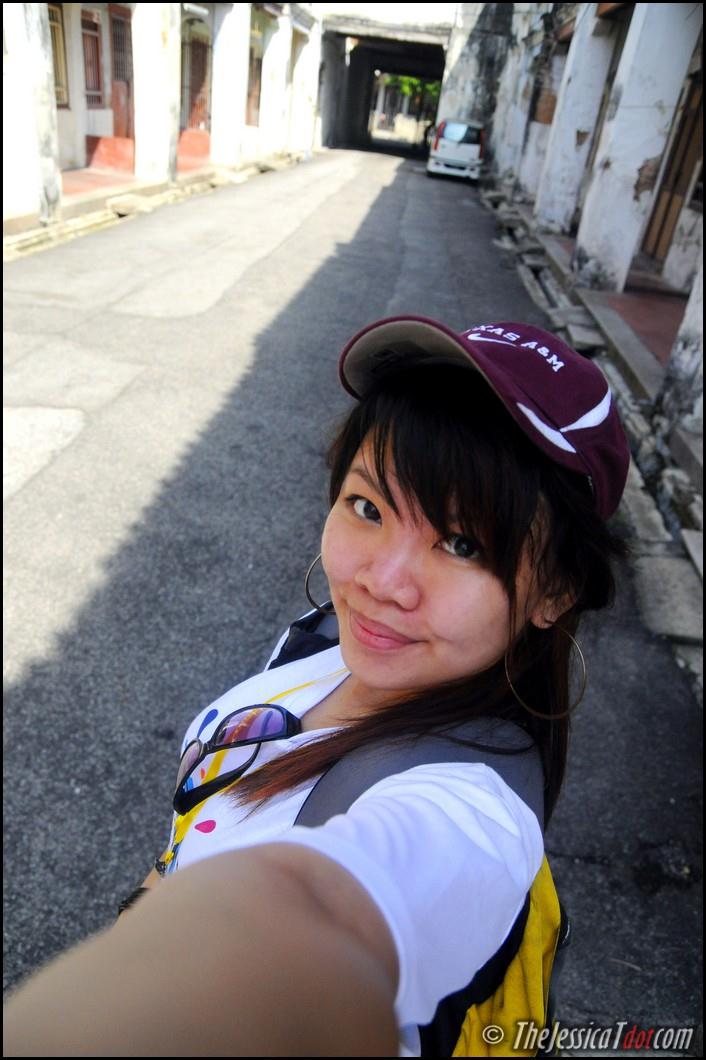 As you can already see, the lil BRATs were sent out to the streets to put their newly acquired journalistic skills to the test 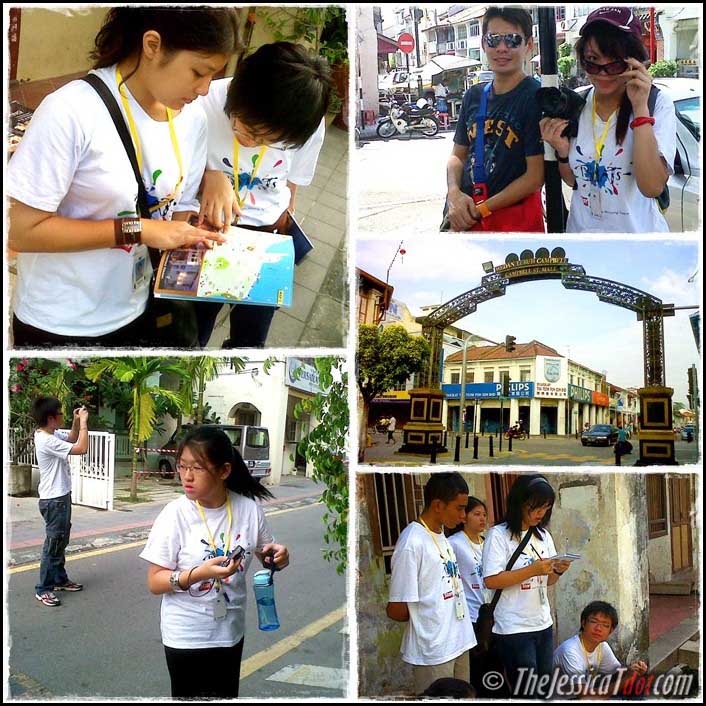 On the 1st day, the whole lot of them arrived at Cititel Penang slightly past noon. Some of them were slightly apprehensive while the rest were already jabbering away with each other like old friends. (Was told that some of 'em met on the plane!)

Nevertheless, we did a lil introductory and ice-breaking session. Perfect for them to hit it off and begin mingling among themselves 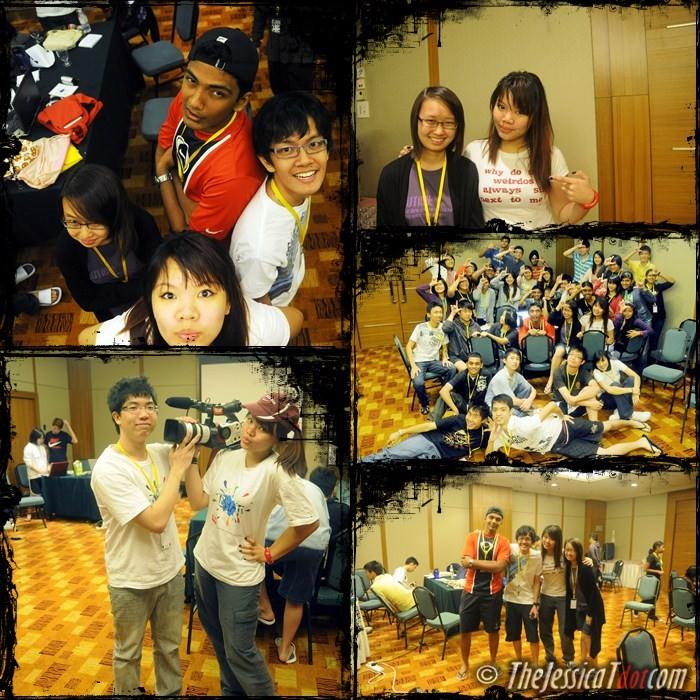 and Sean the spy

As soon as most of them were introduced to each other, it was time for short lil tea break to chat over some coffee and food. Photo taking session was up next, and the BRATs were to change into their official BRATs T-Shirt for the group shot. 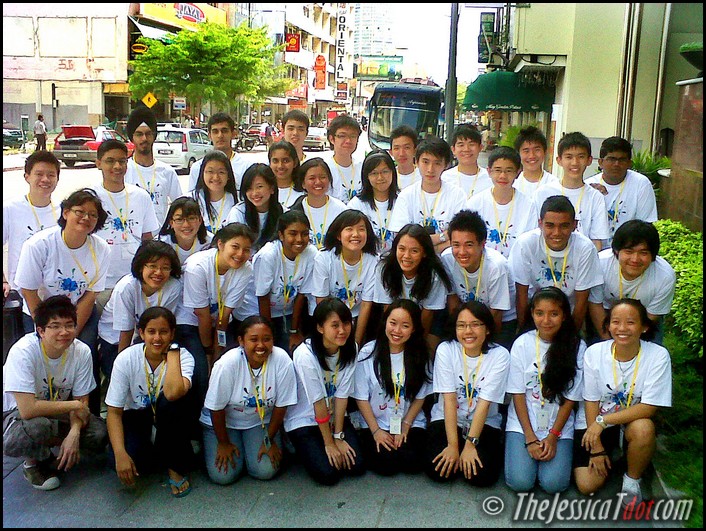 Back inside, they were taught the basics and everything they needed to know about producing newsworthy material and media content. This includes newspaper articles, videography, sound slides and blog posts

We did a lil mock interview session with many different circumstances to prepare the participants of what to expect out there in the streets. Grumpy people? Reserved people? Overly talkative people? Evasive people? Emotional people? Just you wait, there's a world of an adventure waiting for them! 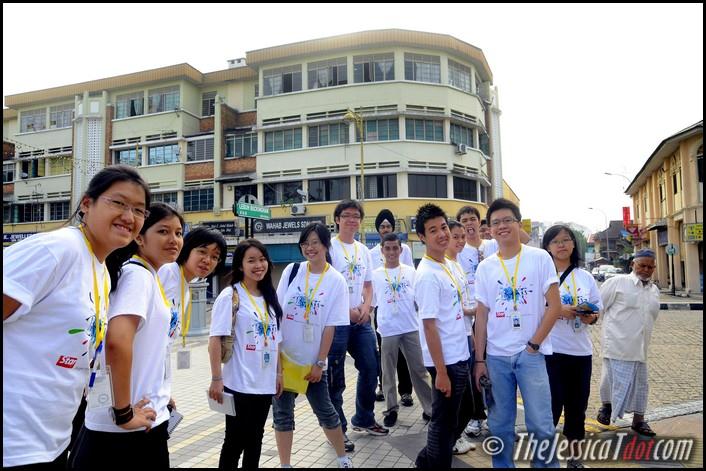 Notice an extra BRAT entering the frame on the right? 😛

As this group was still kinda large, they were further split up into smaller groups. I was with them in a really cosy outlet called 'Sentuhan'. It's a really pretty place where natural soaps were sold and the packaging were all hand-weaved by single mothers! 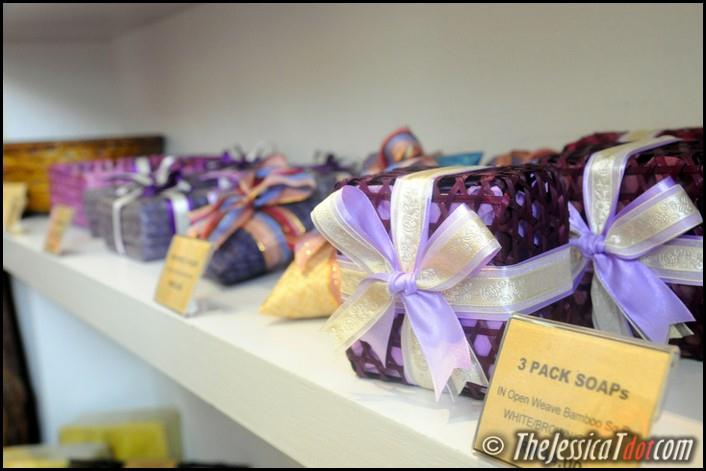 The next stop was at Penang Apprenticeship Programme for Artisans, fondly known as PAPA along Church Street. This is a really unique programme launched by the Penang Heritage Trust to actively promote cultural legacies. Here, the BRATs applied their knowledge on interviewing,  videographing and interaction skills.

They managed to speak to a few PAPA tutors and had a hands on experience on weaving rattan too! 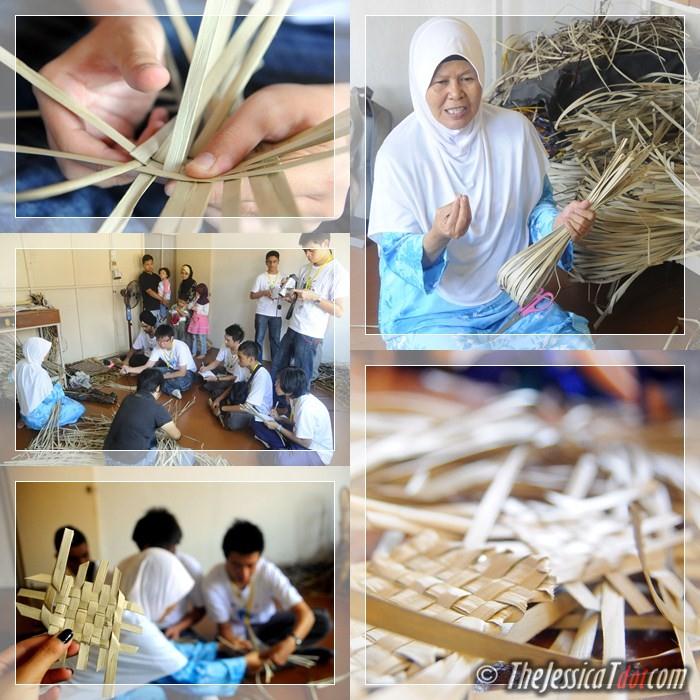 I then made my way downstairs (friggin' steep staircase! watch your step yo) to check on the other BRATs

who were having a similar session in weaving baskets 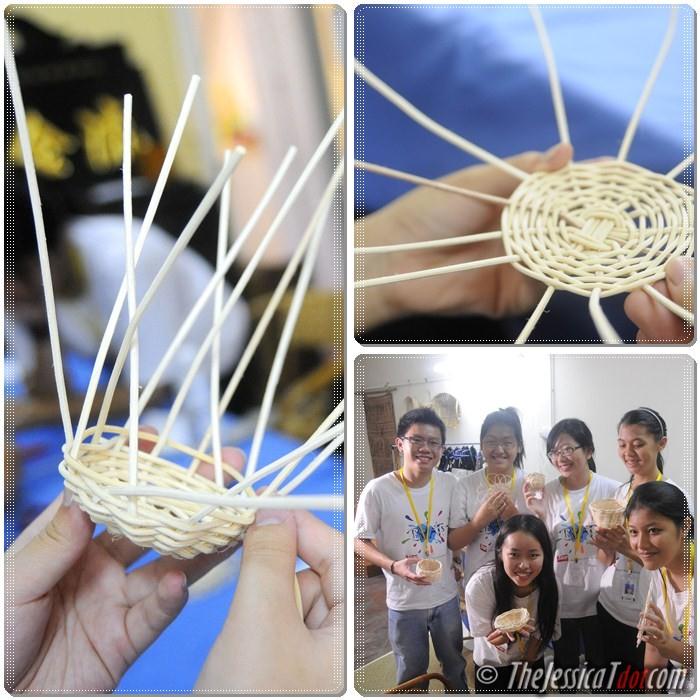 BRAT Johnathan seemed to be the 'basket master' for the day!

What's there for lunch? After having hotel food for the whole of yesterday, it was high time the BRATs get their true taste of Penang. By consuming nothing else but Penang Food! We brought them to a popular Penang Laksa and Char Koay Teow store downtown… 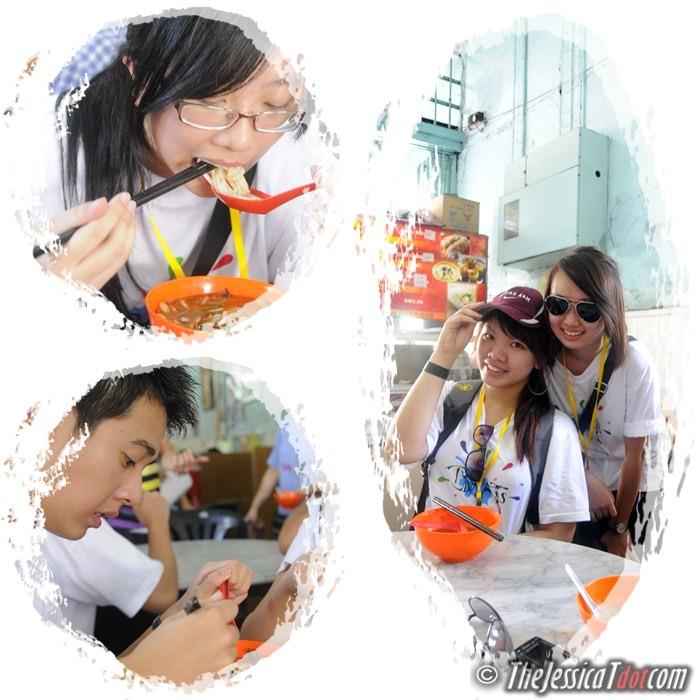 where they were slurping away, bowl after bowl

The next day, we sent them out to the streets again to sniff for more stories about Penang and its culture, food or whatever aspects they want to report about! Check out the exuberant bunch, all ready to tackle the streets 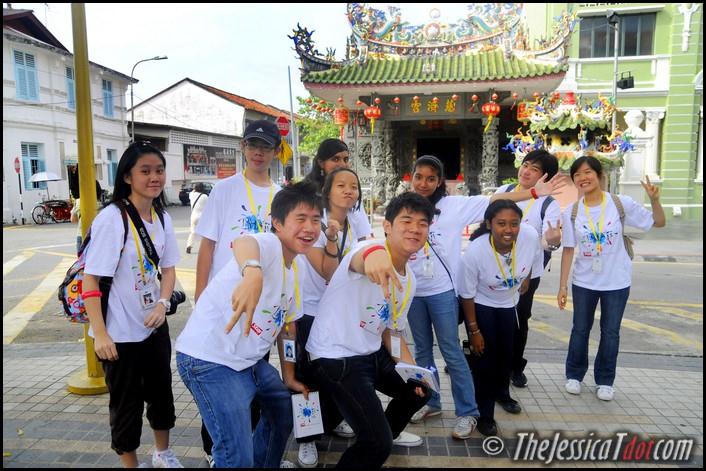 But heck, that aside, it was pretty comical! 😀

I brought the rest scouting for more news stories elsewhere. We spotted a huge mosque standing tall in its finest glory, under the hot sun. Could there be a story behind this historical building? 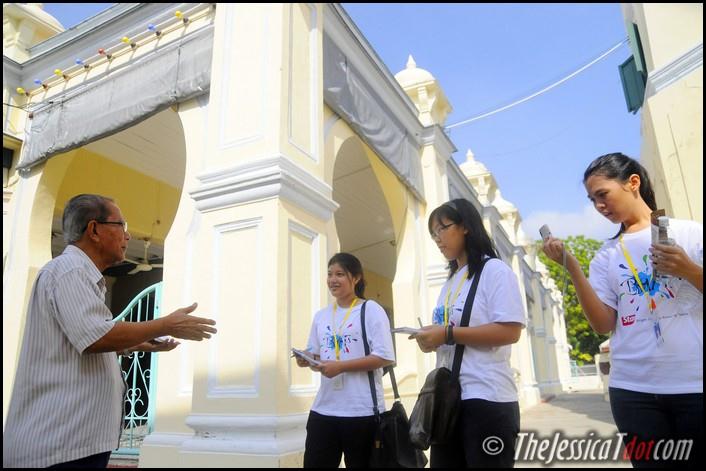 The BRATs interviewing the caretaker of the mosque 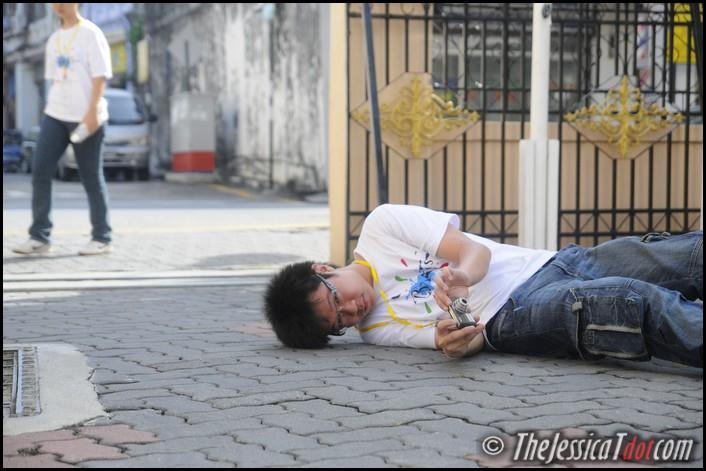 When I said, "take the mosque from bottom-up, include a bit of the sky too"

I DIDN'T MEAN LIE DOWN IN THE MIDDLE OF THE WALKWAY!! 😀 😀

On the way back to the hotel, I spotted something that ought to be acknowledged. How often do you see a sight like this? This photograph goes a long way into the depths of history, love and speaks for itself : 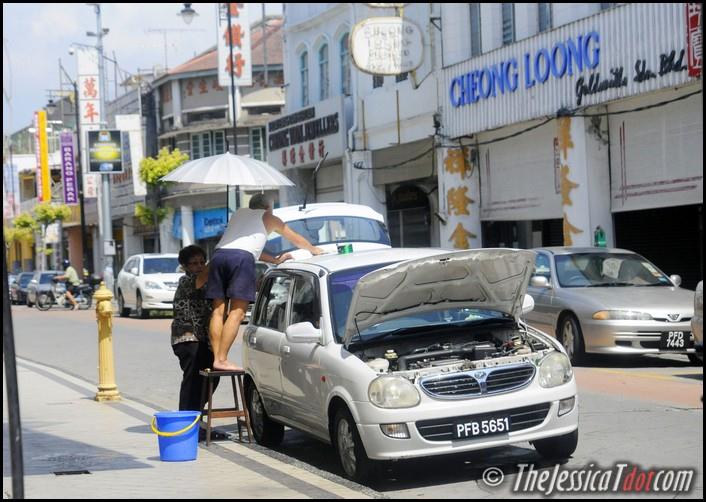 As the days passed, the BRATs continued to work on their assignments in preparations for the final day of presentation. But all work and no play, will make them a buncha dull and their day a mundane one. There was a performance night on their last night – a little something they've cooked up to entertain us and each other! 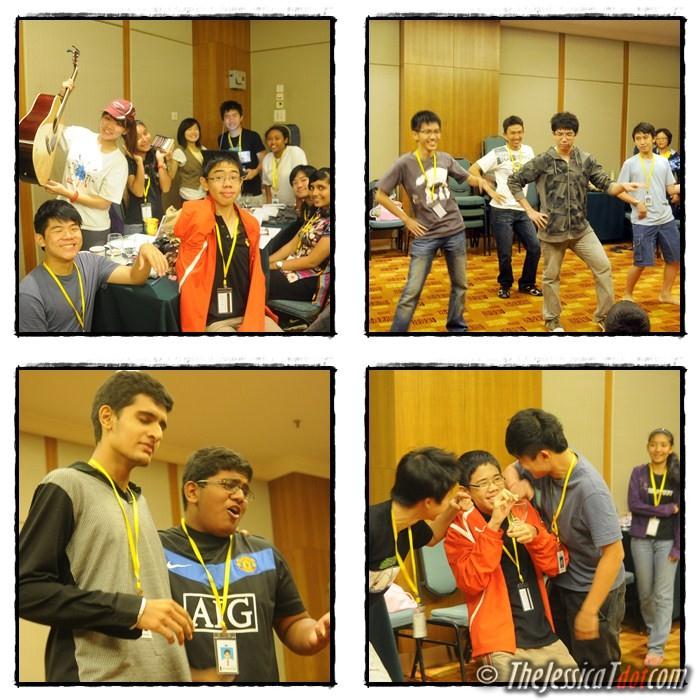 There was a choir with self-written lyrics (gotta admit, that was really sweet!)

Play and dance (wacky one yo!) 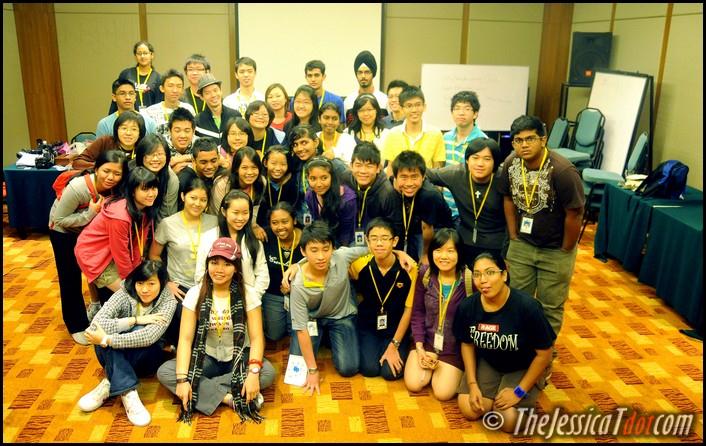 random group picture! <3 Sharm and I with the participants

The final day was spent reminiscing, bonding, finishing the last few touches before handing in their work. Ta – daa! By noon, they were presenting everything that they've worked hard on. Their news content! 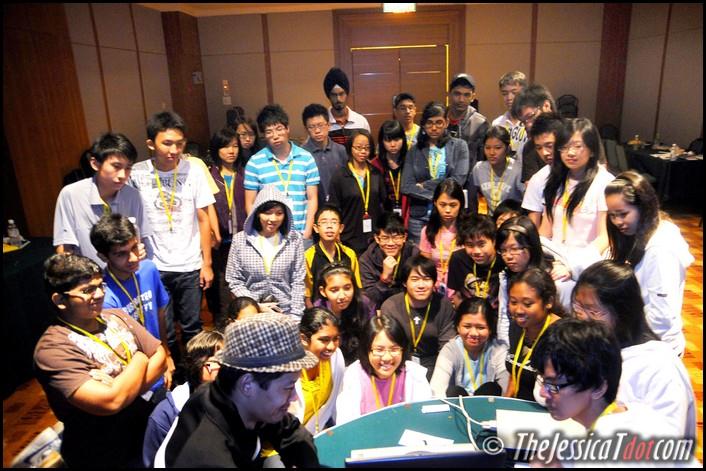 all the BRATs listening and watching intently at each other's work

Just like every other batch of BRATS year in and year out, there was laughter, stress, drama, fun and friendship involved. It was hard to say goodbye, on the day they parted. Now, this moment reminds me of the time when I was a young BRAT back in 2005 as well. That was half a decade ago and we still keep in touch 🙂 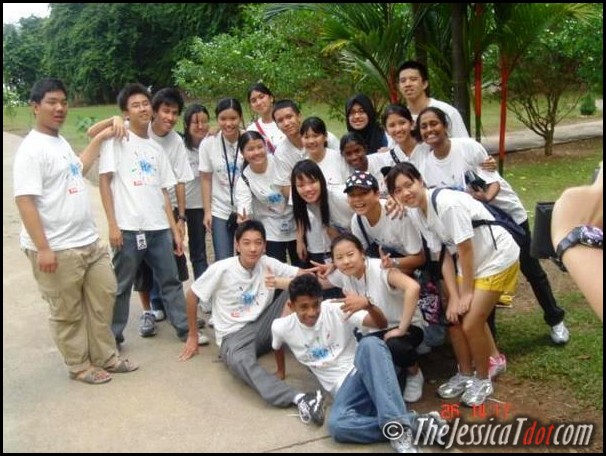 From strangers, to friends.. closely knitted today and most of all.. UNITED 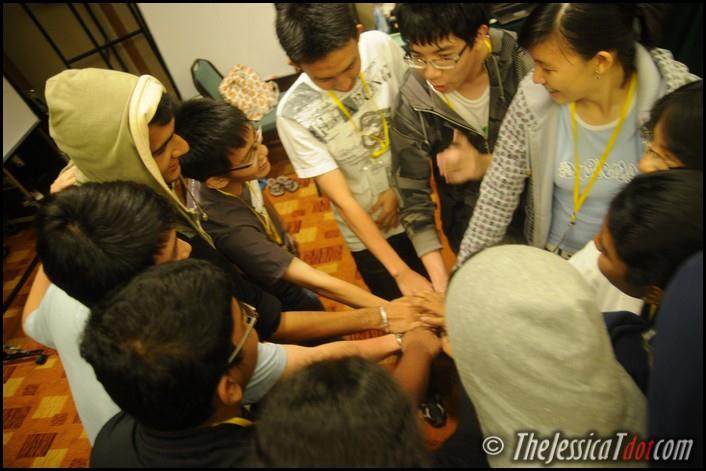 We hope you remember everything that has been taught, imparted and experienced throughout the 4 (gruelling) days of the BRATs workshop. Most of all, we're glad you had fun. We know you did, don't deny!

And the best part is, I keep getting spammed on Facebook because of their goal of accumulating 1000 photo comments on their group photo which I first uploaded 😀 Now, that's the spirit yo! 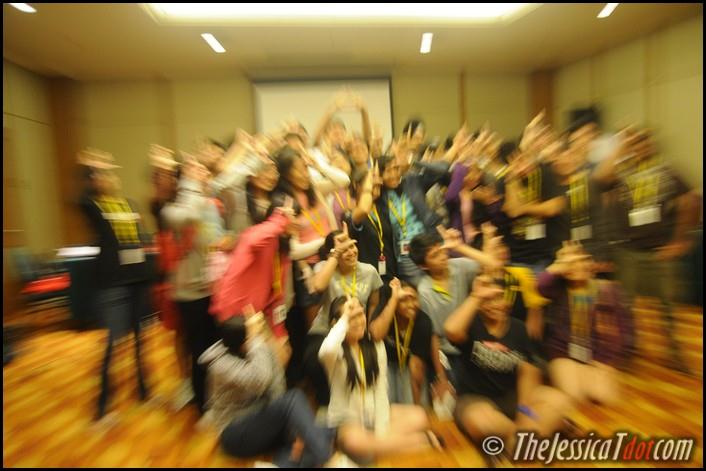 and the spirit of Glee 😀

I hope you will always remember me too! The one who you constantly bug to ask about blogging and everything about it. Who knows? I might see you next time, during the BRATs End Year Camp 😉 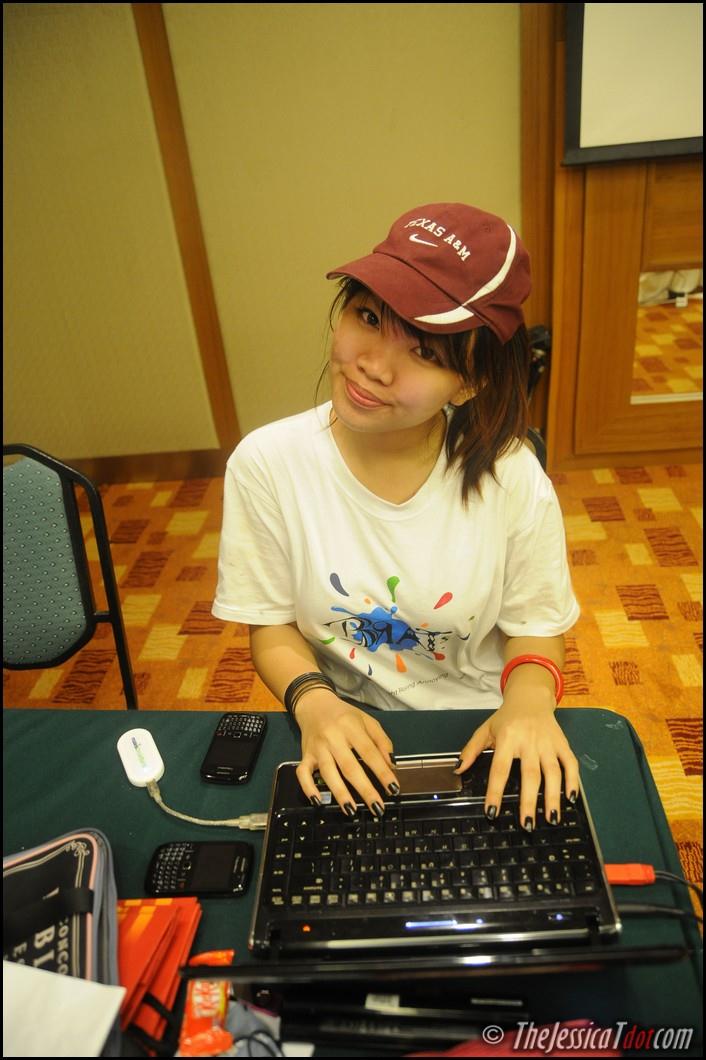 Oh and, I hope all of you are beginning to start your very first blog (or keep up with your existing one) after your tumblring experience 🙂 Don't be like SOMEONE who takes 2 1/2 hours to blog on the BRATs Tumblr blog yeah 😛 😛 We all know who it is!

To those of you who have always been wondering what The Star BRATs programme is all about, stop hesitating and try it out for yourselves. Trust me, you will definitely leave the camp a more streetwise, learned and efficient person. But most of all, I know you'll have so much fun! 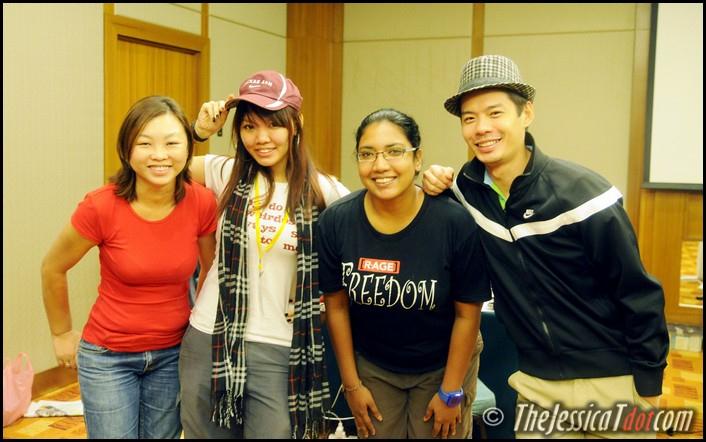 With the facilitators Ivy, Sharm & Niki. See you next time!