An impressive and elaborate Chinese New Year Luncheon – thanks to Visiber!

I know Chinese New Year isn't over yet, but I can't wait to share how the celebrations were! There's still plenty coming up, with the family reunion and mini gambling sessions with friends – but now, here's one CNY Luncheon that began the lunar new year with a big bang! 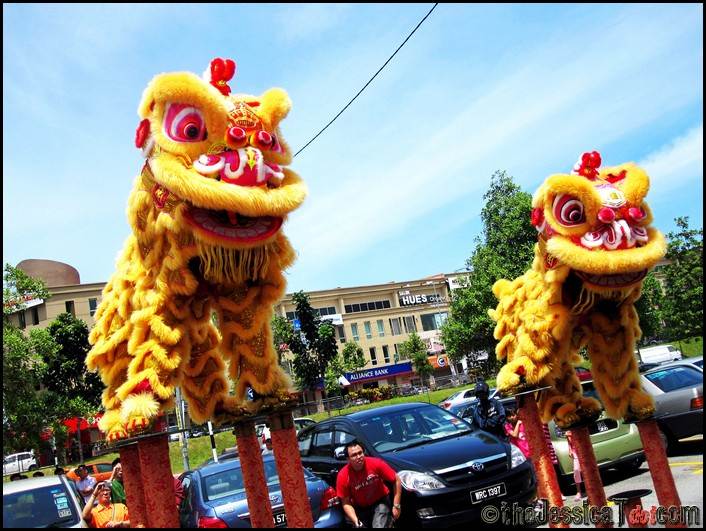 I was invited to Visiber's Chinese New Year Luncheon last Saturday and it was impressive how big a scale that luncheon was! Now, this was one event that anyone could spot from a mile away. Visiber and its surrounding vicinity was very well decorated and the amount of guests wearing bright & striking red? Innumerable. 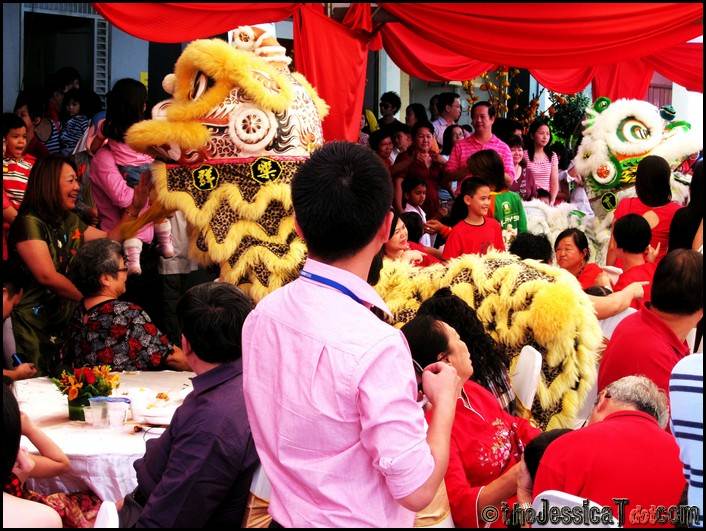 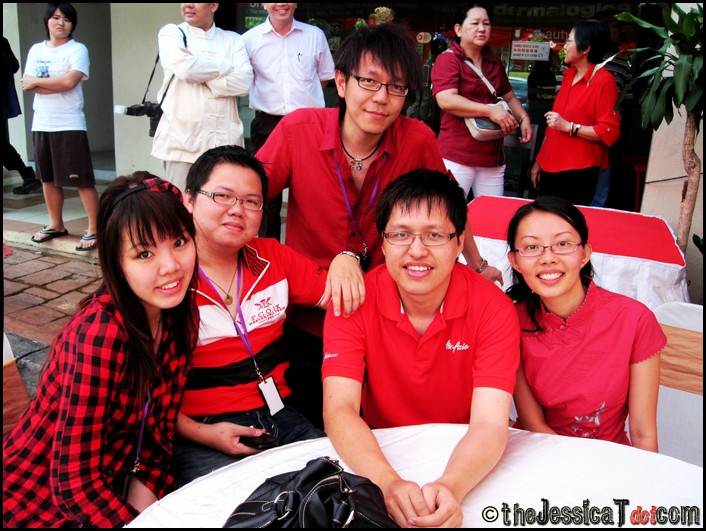 With the creative web team 😀

who were in red as well!

What I liked most about it was although they did it in an elaborate manner -with tables and tables of delectable buffet food varieties, lion & tiger dances ON 12FEET HIGH STILTS, God of Prosperity mascots giving away AngPow packets, impeccable decorations and so on – they never steered one bit away from the gung ho festive spirit of Chinese New Year. 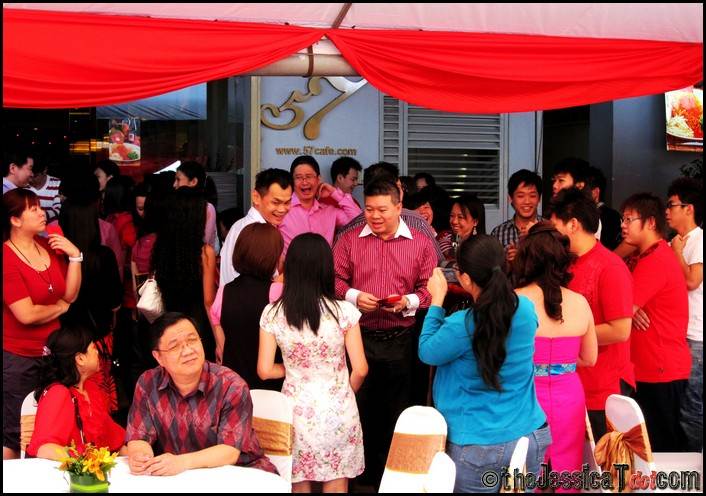 The bosses generously giving out AngPows to the guests 🙂 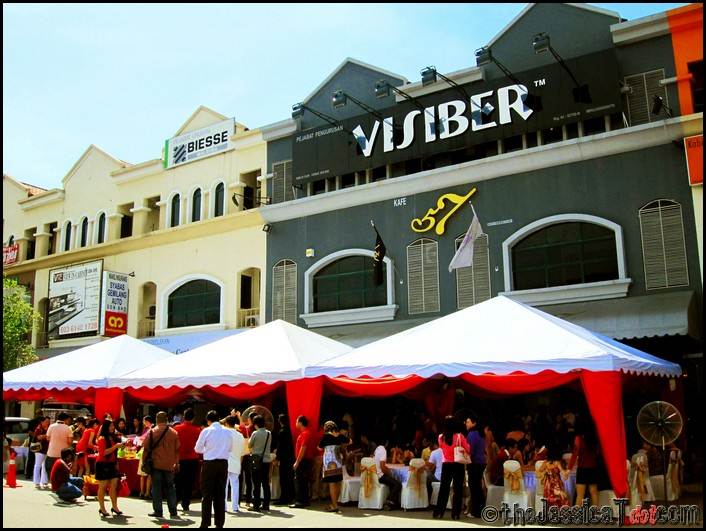 Lots of merry making were seen at all corners and we could all feel the warmth and unity of the people in the house! 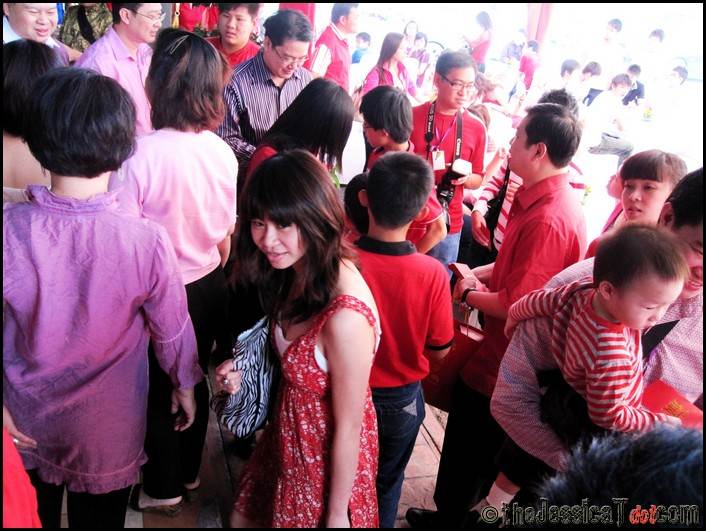 I initially wanted to wear my Cheongsam (Qipao) to the event – but unfortunately, the one I own was black! Not exactly appropriate to don black on a Chinese New Year celebration. It's a taboo apparently! So I settled with a red checkered blouse with a matching hair bow instead ! 😀 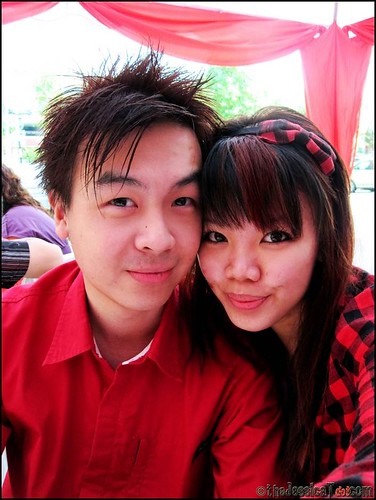 I was astonished when I caught sight of a few huge pieces of lamb being grilled by a fully uniformed Chef live before us all. Certainly did not expect to see that! Also, the chef was such a jolly good fellow!

When I 1st spotted him grilling the huge slab of something that resembled an animal, I asked, 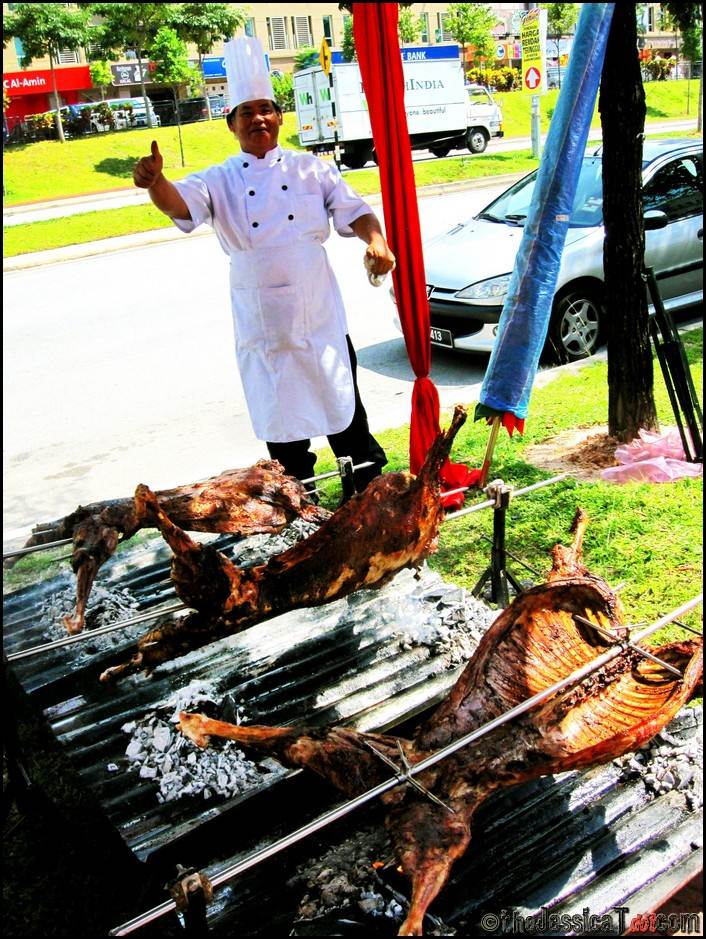 he chuckled loudly with a twinkle in his eye.

From there, I instantly gathered that he meant mutton 🙂 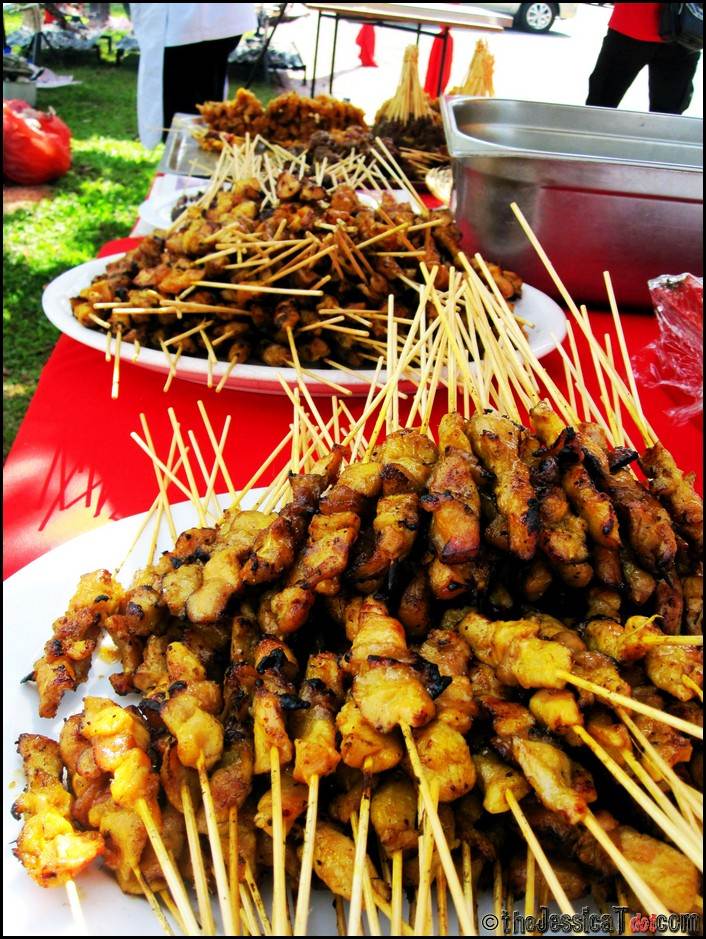 There were lotsa satay too! Two lovely Malay ladies were busy behind the BBQ pit and the marinating bowls. Well, they're the ones behind the succulent and tasty satay. Glad that Visiber so smartly included these live grilling stations! 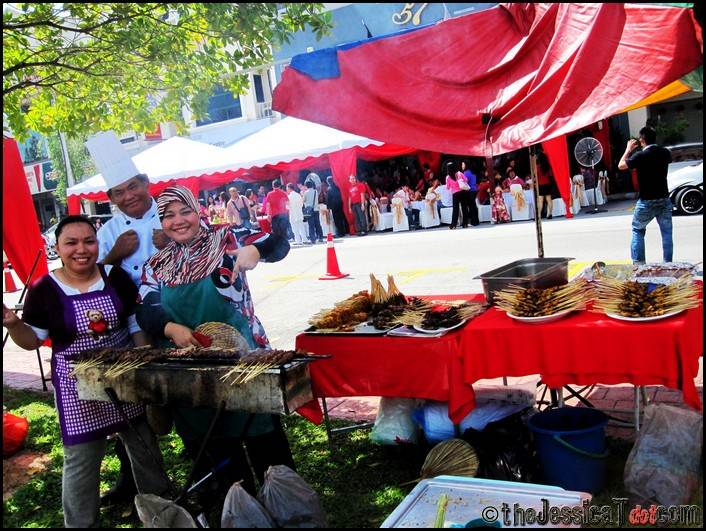 What year is this again according to the Chinese zodiac? If you didn't know then you must be living under a shell! Why, it's the Year of the Tiger of  course! And we significantly have a new member to the Lion Dance. 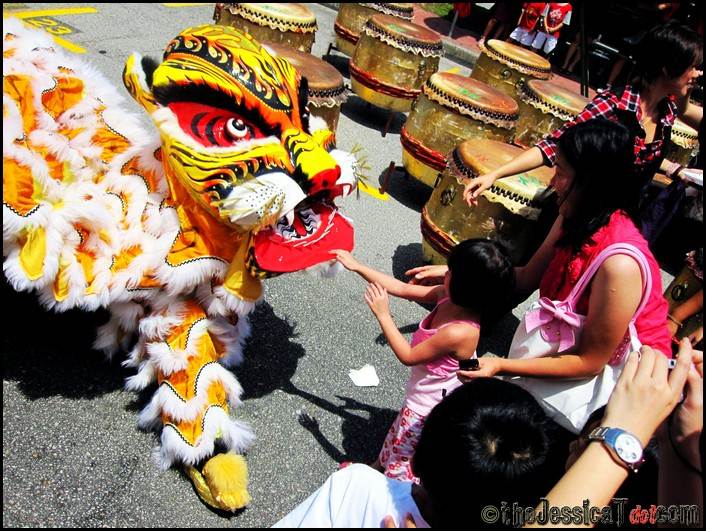 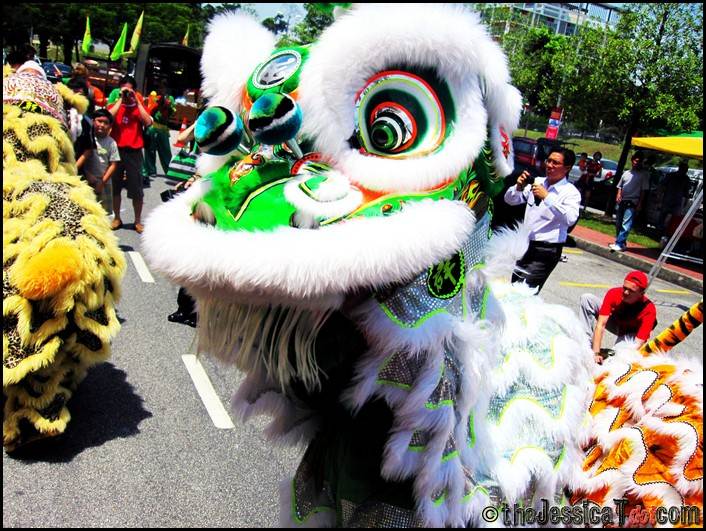 Soon after, the Lion + Tiger Dance was at it – complete in choreography too! The year of the Tiger has it all 😀 It was really a combo performance, bursting with zest but not until they leaped to the sky high stilts to work their magic! 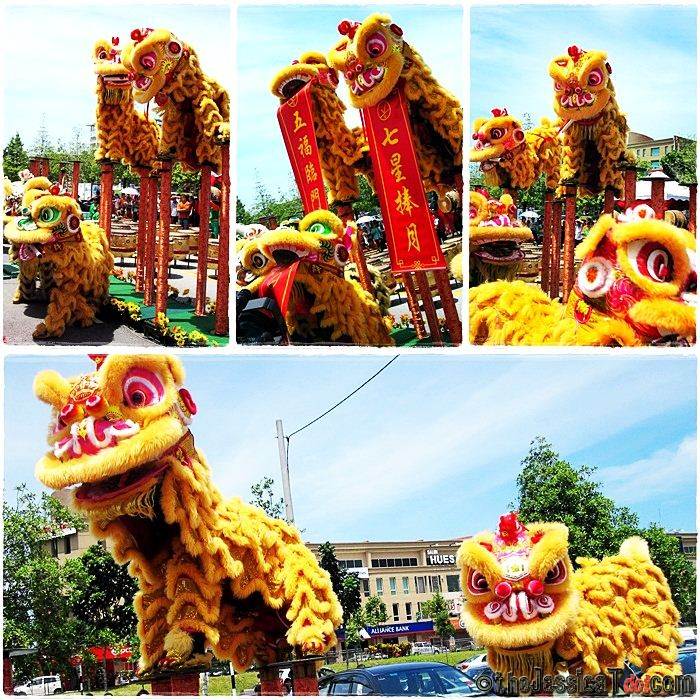 I reckon these peeps have been training all year to perform marvelous (not to mention, dangerous too!) acrobatic stunts. 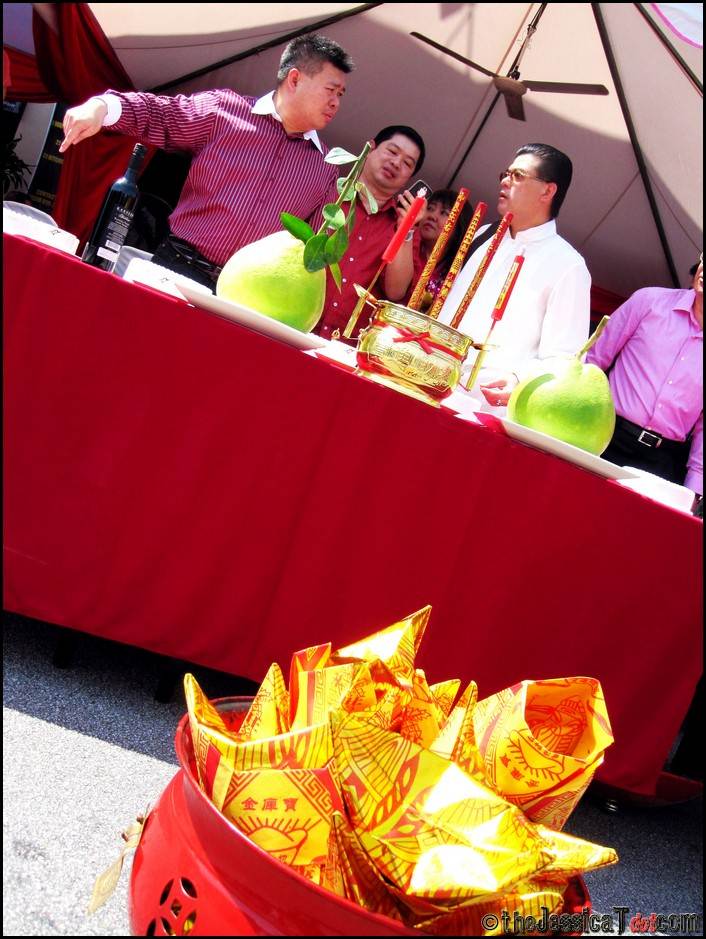 As Visiber is very well known for their repertoire in numbers & numerology, how can they not have numerical cakes present for this CNY luncheon? I spotted lotsa adorable fluffy cakes with brightly colored numbers on top! 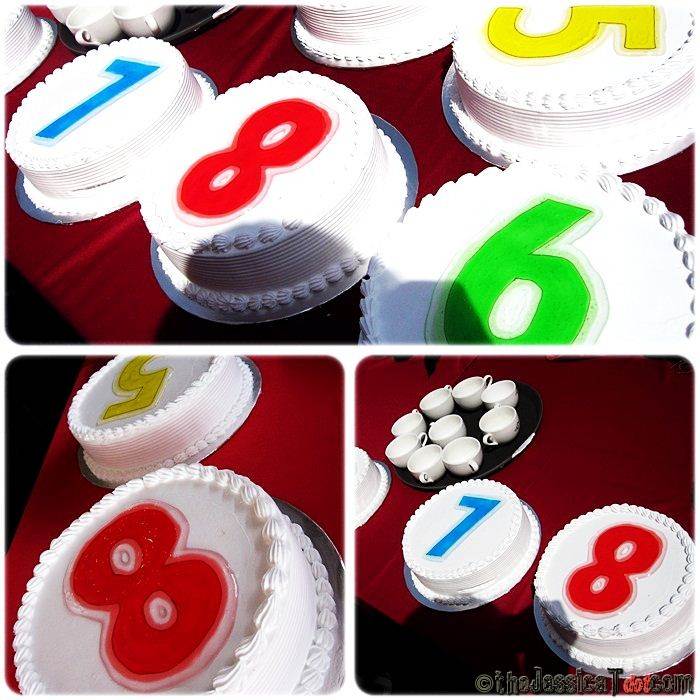 Then it was time to do the Chinese New Year traditional rituals of prayers and burning notes in a large ceramic cauldron. Was pretty cool that the board of Directors and Department Heads were leading the other staff in doing this practice. 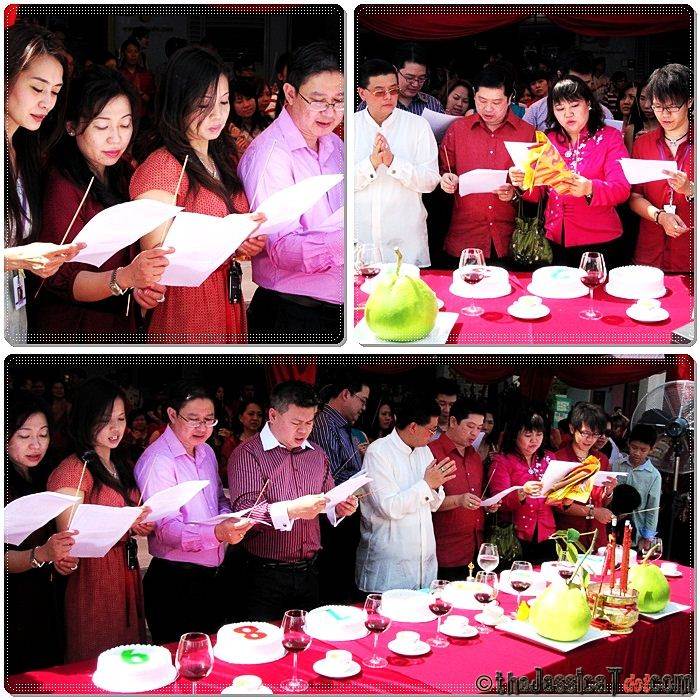 I watched silently, but with keen interest from the sidelines as they read out vows and other mantras 🙂

It ended approximately at 3pm. Humid as the weather was, it didn't seem to scorch away the spirit of festivity. Happy Chinese New Year again to all my readers and do enjoy the remaining days of CNY! There's 15 days altogether, if you didn't already know 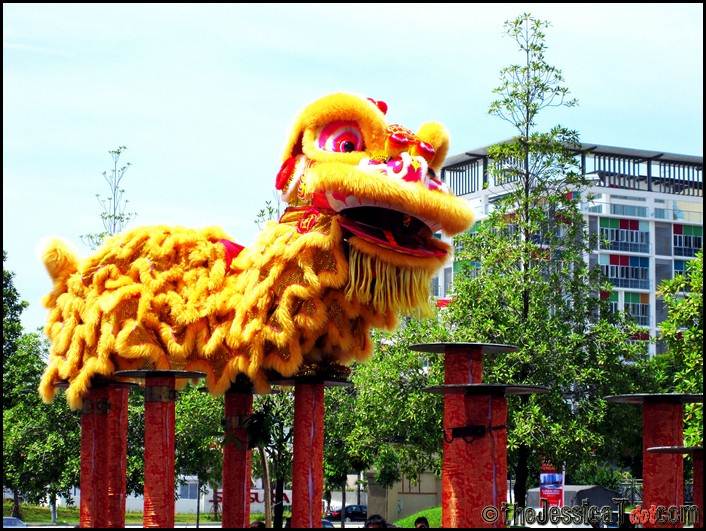 « Previous post
Blackberry Maxis Telco vs. Blackberry DiGi Telco comparison & review: Which is better?
Next post »
Back to studies! Monash Orientation Week. Funny feeling to be back in University!