Back to studies! Monash Orientation Week. Funny feeling to be back in University!

Oookay. So this is it. Back to life in university! Its a very strange feeling to be back, having dabbled and worked in the industry for a quite a fair bit. I hope I haven't lost my study mojo though *gulps* As you would have already read from my tweets, today was my 1st day of Orientation. Figured you would wanna know how it went for me! 😀 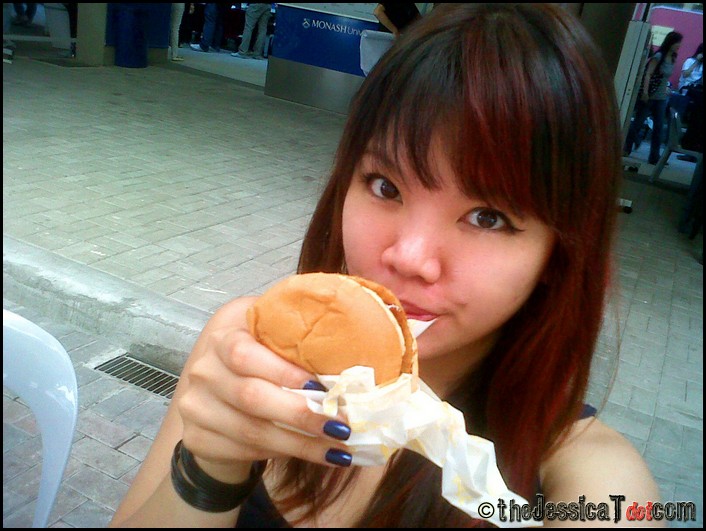 My breakfast, brunch and lunch on campus. How sad.

You'll see why in a bit

Felt enthusiastic yet oddly nervous at the same time. Didn't know what to wear, as I couldn't remember the last time I wore something academically appropriate in campus. Soon enough, I discovered that there aint no dress code in Monash University unlike my former college KDU. Yippee! Anyway, boyfie told me not to wear heels nor a skirt because we might be required to play games.

BUT I WORE A SKIRT ANYWAY

Let's just pray we didn't have to play games then!

I arrived at an ungodly hour of 8.30am. Oh believe me when I say I'm never a fan of early mornings, I absolutely despise it. But ironically, I parked my ass into Monash University foyer and was told that the orientation for the School of Arts & Social Sciences begins at 10.45am. FML. -__- So there I sat, all alone with only my Blackberries keeping me company.

And it didn't help that I absent mindedly forgotten to bring my wallet to Uni as I left it in my gym bag last night. Double FML prosperity -__- 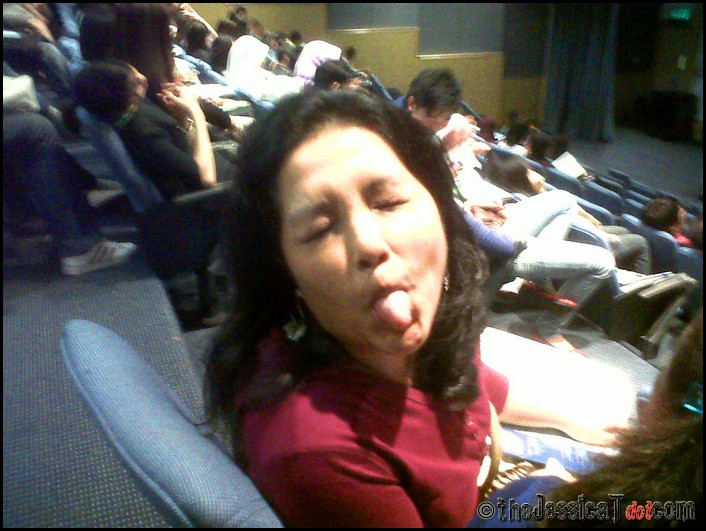 yes you may stick your tongue at me now Nadia  T___T

Keeping myself well-occupied with people watching, it is beyond me as to why certain students just had to bring both their parents and (possibly!) the whole family tree along with them to the orientation. I mean, hello? You gotta be AT LEAST 20 years of age to enter University, and yippee yaya you brought mommy daddy grandpa grandma uncles aunties brothers sisters and a stroller with a baby inside. I swear there was not exaggeration.

Say hello to my new home

Totally reminds me of how mom and dad used to wait outside my Primary One classroom for me under the tree with all the other parents. Mine were holding my lunchbox waiting to accompany me during recess. I vividly recall I wore my ponytail in a while ribbon which mom ties for me every morning 🙂 OKAY ENOUGH NOSTALGIA 😀 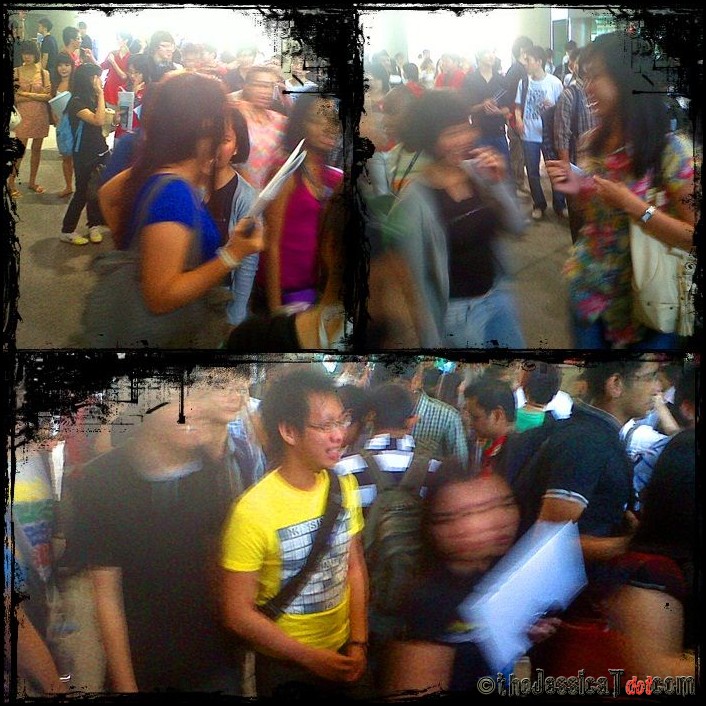 was walking as I took quick random shots

More and more students began flocking the registeration counter. My eyes darted across the area in hopes of landing them upon a potential classmate. Yes you read right, POTENTIAL CLASSMATE. They say that you can tell a Communications student from other students. We're generally stigmatized to be a notch dressier and louder in character. 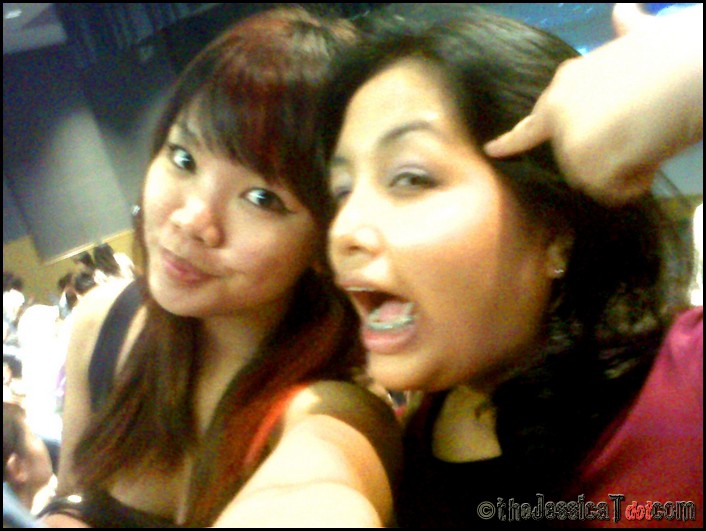 Spotted Nadia, my former classmate back in college lining up for her turn.

Apparently, all the Communication students ended up in the wrong auditorium (blame that lady who passed down the wrong info!) and we all had to switch auditoriums. And that's when I met my new clique. We clicked instantly and found out that we had lotsa things in common. All 3 of us also had bangs and the best part was WE WERE ALL FROM KDU COLLEGE albeit different campuses. 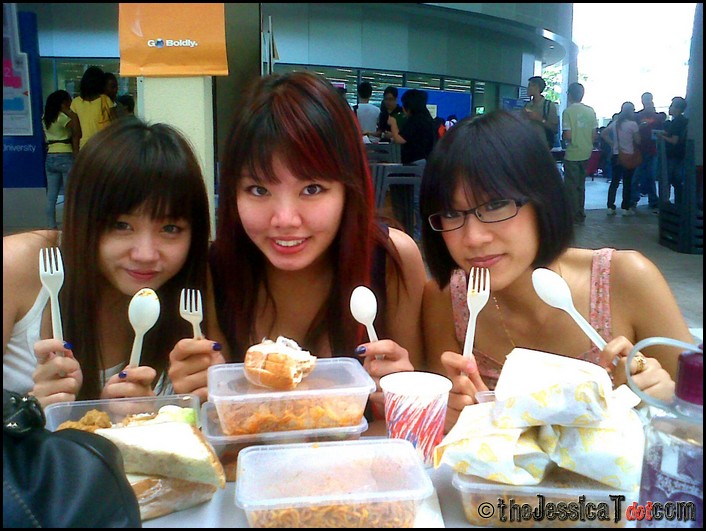 Birds of a feather really flock together! 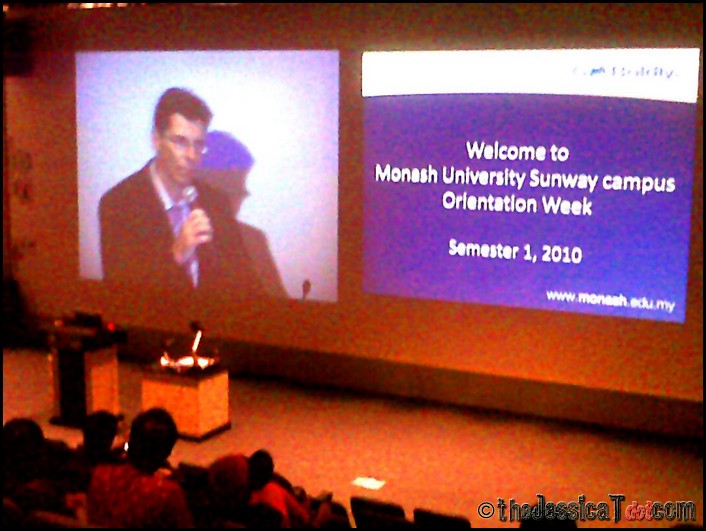 Sorry! Used the blackberry to snap this under bad lighting

Soon it was time for the most repetitive and dreary briefing ever and we were bored out of our skins. If I remember correctly, one of the things we were told was not to talk to strangers. Ohhh-kay -__- Do we look like 12 year olds? hmmm. But anyway, better to be safe than sorry I guess 🙂 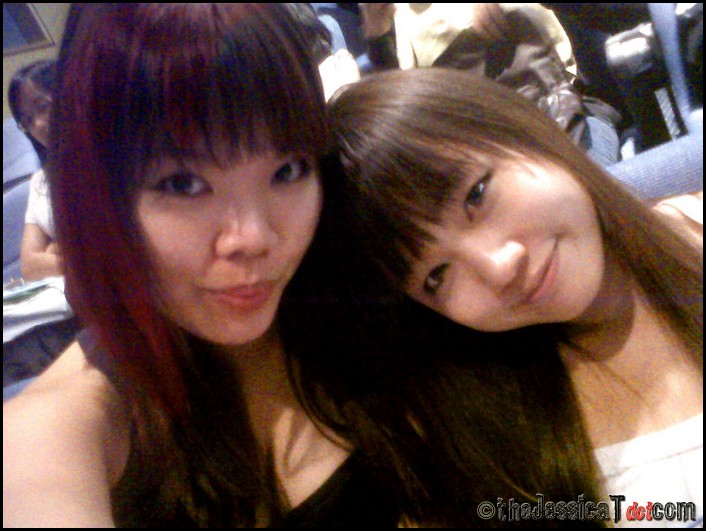 When it was all over, the 3 of us – Jody, SueAnne and myself sprung outta the auditorium and quickly registered ourselves for the Monash Trip to Genting! It's gonna be a one day bash, we're gonna have so much fun 😀 😀 Been dying for a trip to Genting for almost a year now. Rollercoaster rides and daredevil activities here we come! 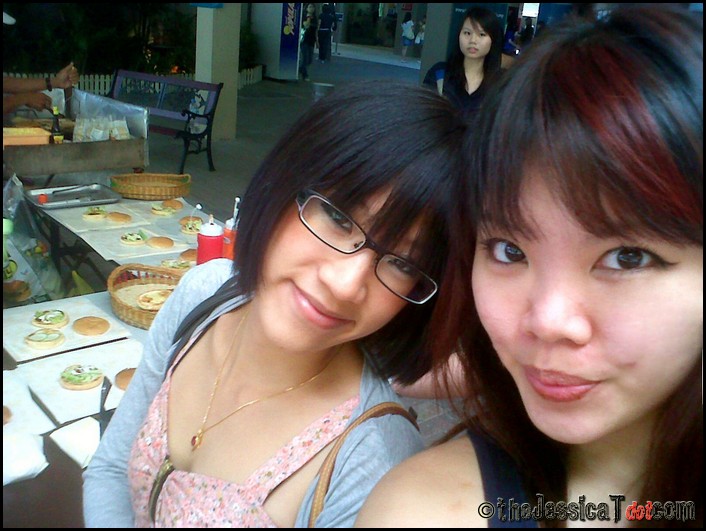 We went in search of food like hungry leopards on prowl and guess what made our eyes glimmer?

J.Co Donuts were in the house! 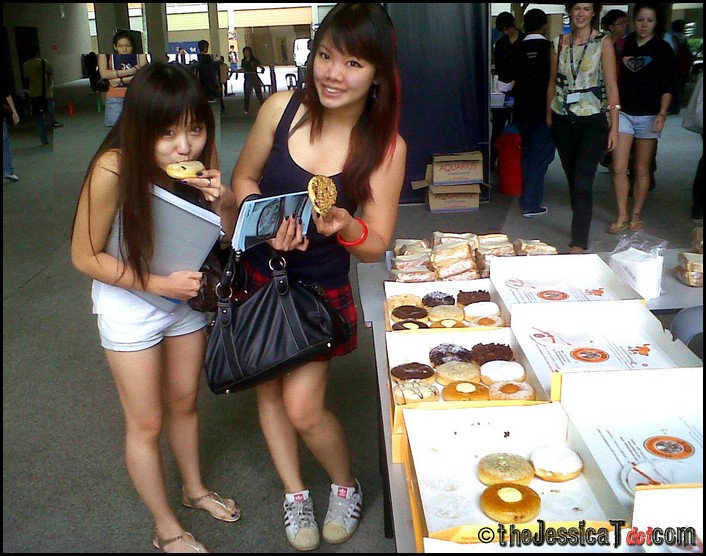 And so was Nasi Lemak, Sandwiches, Burgers and more. We took so much food back to our table to share. Nom noms 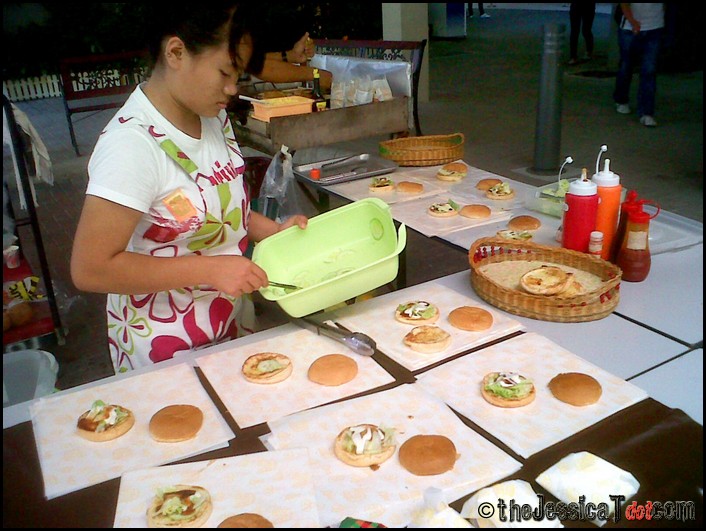 Whilst eating, it's of human nature to jabber and people watch. We spotted a really cute and hunky exchange student (he's prolly Australian) wearing red. But what burst our bubble entirely was when 2 obnoxious guys came right up to us and said the lamest pick up line ever. From the corner of my eye, I could see Jo and Sue rolling their eyes. So what was the lamest pick-up lines of the day?

"THAT'S A REALLY NICE TATTOO. IS IT A CAT? I'VE GOT A TATTOO OF A CAT TOO *points to back*

NO I WAS JUST KIDDING *begins to laugh at own joke*

ARE YOU GOING TO THE GENTING BASH? x2 "

I nodded my head in the affirmative

and just when we taught it was over, the same question was asked

SO ARE YOU GOING TO THE GENTING BASH?"

Is there nothing else more interesting to talk about? 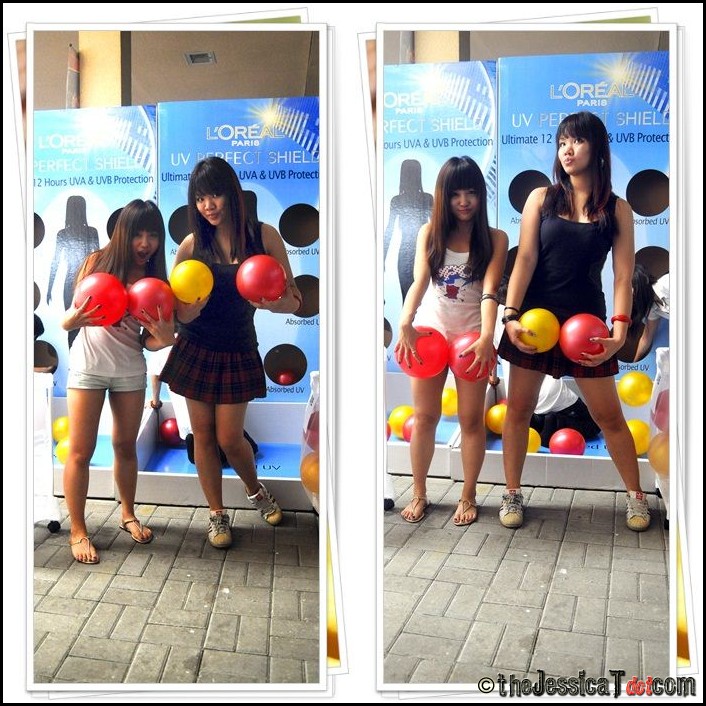 Sometimes, chicks have balls bigger than your brains 🙂

Think twice before you try a lame pick up line mister 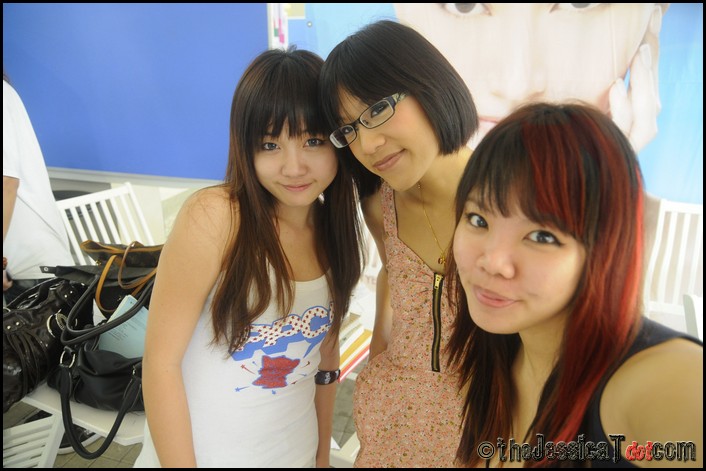 Soon enough, something else caught our eye after all the people watching. There was a L'Oreal roadshow and they were giving away their latest L'oreal Dermo Expertise Hydrafresh (omg super long name wtf) Anti-Shine All Day Hydrating & Matifiying Icy Gel. It's deep marine source water is rich in purifiying minerals and it's supposed to act as a a tinted moisturizer or a make up base. 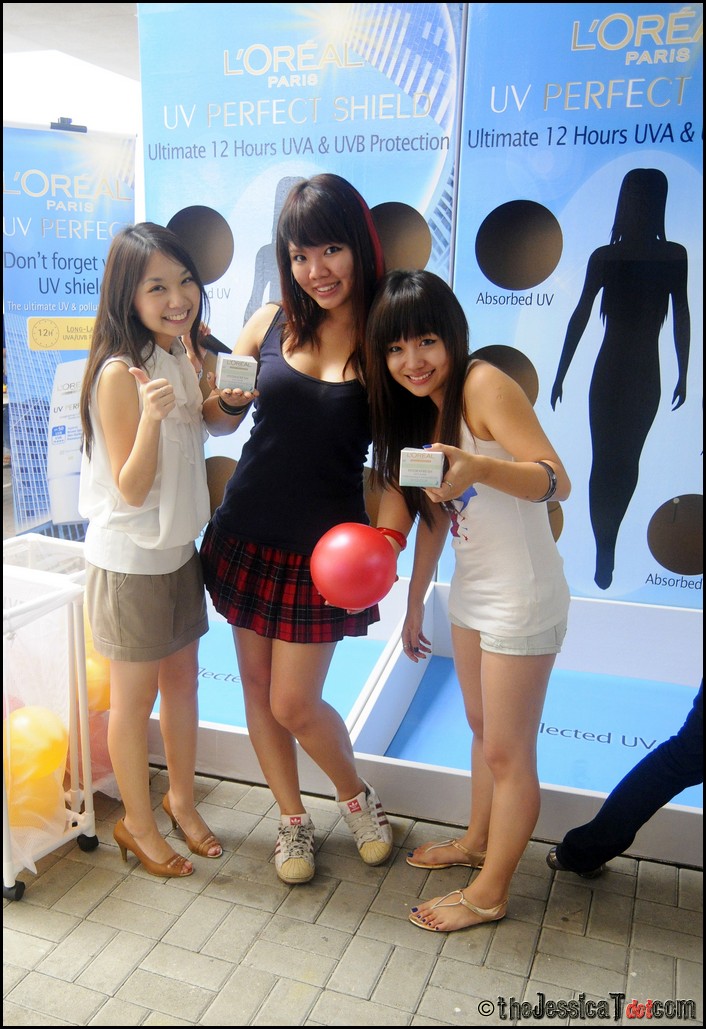 We tried and tested it – was really smooth and blends so well.

We had to play a game to get it though.. and we gave it a shot! I reckon it's a simulation of what that icy Gel is supposed to do to your skin Protection against UVA and UVB. The yellow and red balls were supposed to be the UV rays that attacks our skin surface 🙂 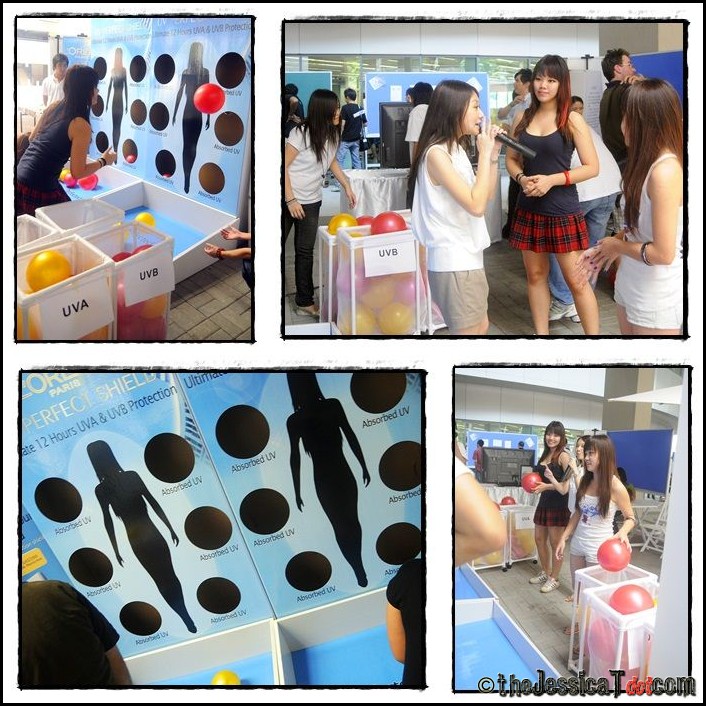 All in all, the 1st day of Orientation Week went well for me. Made new friends and sorta nestled down already even within a few hours. Ohwell, more to come! Can't wait to embark on new adventures, life-dramas, study pressure and to see what heralds next for me. But one thing's for sure, I won't stop what I'm already doing. I will just have to learn how to stay focused and juggle studies and work well ^__^

The best part of today's orientation was… 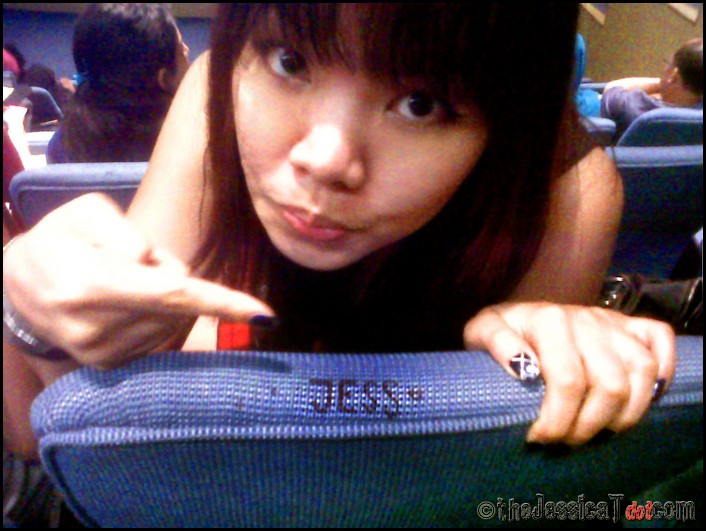 Creepy much? Thanks to fellow student Dianah who pointed it out to me in alarm

Full swing yo! Wish me luck! it's back to school in style 😀