Let the craze for Blackberries propagate! I know so many of you are itching for your very 1st BB but don't know which telco plan to subscribe to. Yup.. there you go, a dilemma. Well I definitely know because I've quite a number of people already asking me which is better and worth paying for.

Basically, it all boils down to one thing.

WHICH IS A BETTER DEAL?

I was given the opportunity to review a telco plan on a Blackberry unit – which is perfect as I have a similar Blackberry registered with another telco to compare it against. It has been almost 2 weeks of usage of both the BBs telco services and within my 1st week and near 2nd week, I've noticed a few huge differences in that short period so far. 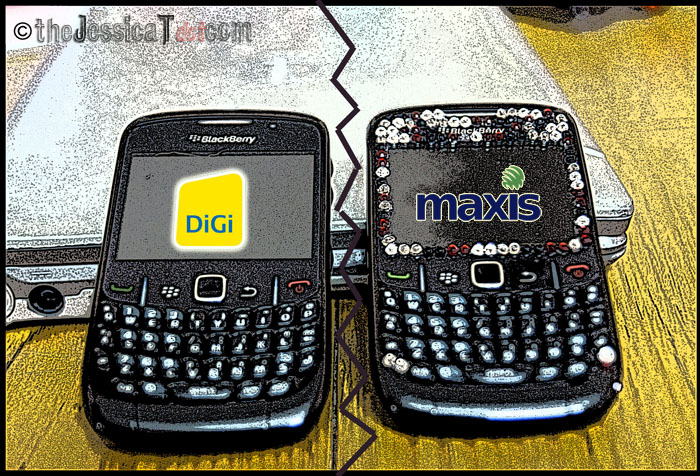 Okay, first and foremost – Imma introduce you to what I'm currently using for EACH telco Blackberry plan and what has to offer me, in terms of price and plan. Before reviewing the mobile line services, you definitely need to know what you're gonna be in for first, right?  I'll let the stats speak for themselves and from there, you can go figure 🙂

You pay RM150 nett per month for call plan, which includes SMS, MMS and calls.

You pay another RM120 nett per month for unlimited mobile data plan, which includes internet browsing, social networking and emails. 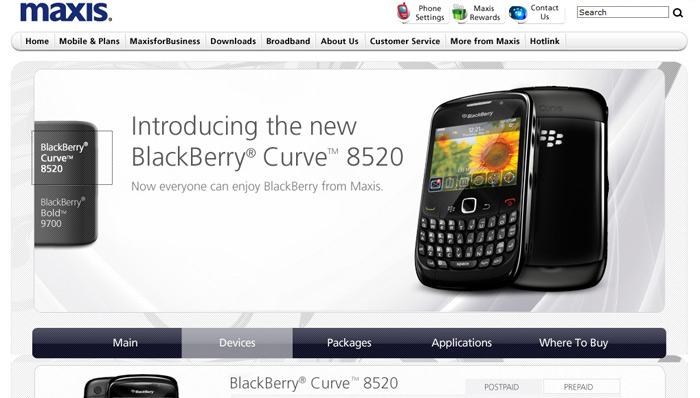 But there's a catch. YouI will have to sign a contract with Maxis for 24 months (2 years) in order to continue. AND yoi must be a principle line holder – not a supplementary line.

But what about the deal from DiGi 's? For the exact same phone which is the Blackberry Curve 8520 smartphone, let's take a look at what they're offering yes? 🙂

You pay for only what you use per month. That means no heebiejeebie of a fixed usage which you have to achieve. It's 5 sen per SMS to any network and 15 sen per minute for calls to any network as well. Don't forget that there's also the Friends&Family promo!

And the best part is? There are completely no commitments at all! This means you ain't binded to the telco and you can stop using or terminate your line anytime you want.

So technically, you only pay RM58 + RM as-little-as-you-want-to-use-per-month. All the freedom in the world to extensively use or use it a little as possible – entirely up to you! So if you're feelin a lil broke this month, then cut down on your calls/texts and it'll still be fine 🙂 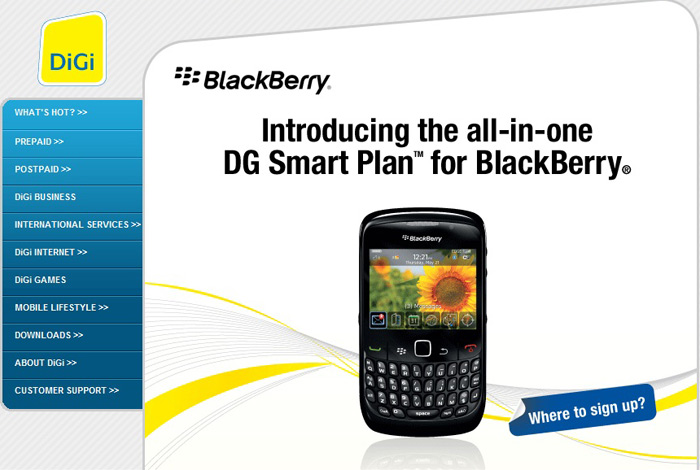 but that's  just a one-off! It's very very worth it if you're gonna use your BB in the long run.

By now, if you're smart enough – you would have already deduced that the DiGi telco Blackberry plan is definitely more affordable and worth spending on if you're on a budget. But the only thing you don't know yet is, how RELIABLE OR UNRELIABLE each of the networks are. You'll find out soon enough 🙂

Blackberry unlimited to me means a hell lot of things. With this, my extreme internet-dependent lifestyle is enhanced by leaps and bounds. I will no longer have to rush to the nearby Starbucks nor stay out late at the wifi-enabled mamaks just to attend to my needs for being online. I could actually sit in my car in fronta some neighbour's house to tap on their wifi. To me, it's a buy beg borrow or steal thing. See how important it is? 🙂 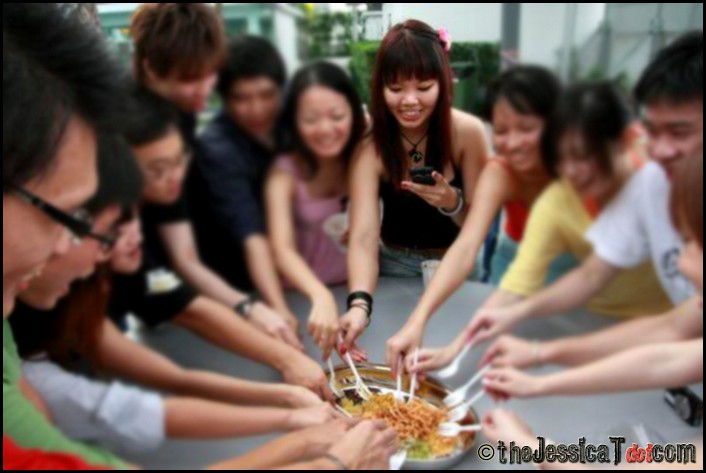 Even my colleagues, friends and family members jokingly tease me by saying that I am "busier than the prime minister" because I'm always with my BB and having to reply emails and constantly do my work on the go. Other than that, I'm religiously hooked on social networking. I blog, Tweet and Facebook a lot from my BB and sometimes stream videos for entertainment. And all these is just a small portion of why having Blackberry unlimited is indeed VERY essential to me everyday. 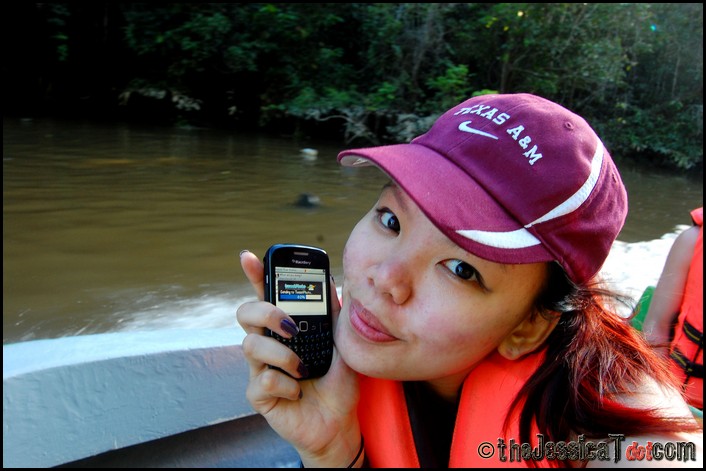 I even need Blackberry unlimited whilst in the middle of a river jungle in Sabah!

Without Blackberry unlimited, I am deduced to nothing (in the 21st century) and with nothing, I'd be better off disintegrated. Okay, yes I'm being hyperbolic here but that's metaphorically as close how much I rely on the internet. They even say that my BB could have grown roots to be a part of my biological anatomy. Thing is, I know some of you are prolly just as internet savy as I am or probably more! *bows* 😀 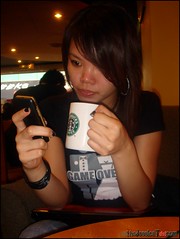 Yes even while sippin a cuppa coffee from Starbucks

Which is why Imma share with you WHICH Blackberry plan is more cost-efficient and worthy so that you don't get ripped off for the amount of money you're gonna pay for! Now that you already know what you're going to pay for, let's just see which Telco will give each other a run for their money in terms of reliability?

Which BB telco plan has a better coverage, quality and yes – which has better connection and speed of the Blackberry Internet Service (BIS). Maxis or DiGi? 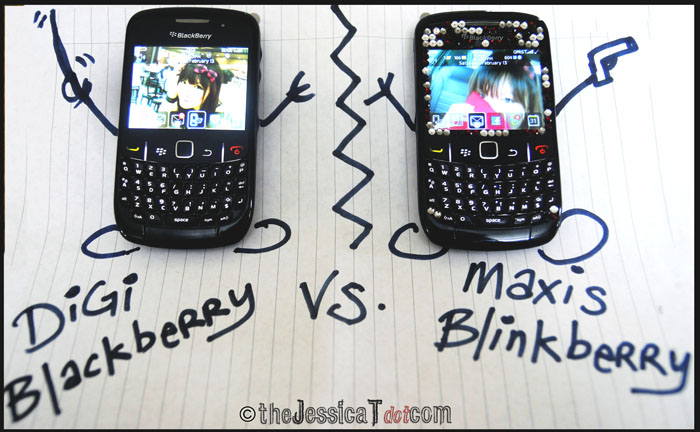 Who will emerge victorious? Let the war begin

PART 2 : Along the North-South highways & hiking uphill, which Blackberry wins?

PART 3 : Putting both the Blackberry  to test in the streets!

PART 4 : Dating both my Blackberries, which did I decide on in the end?

« Previous post
A near death experience by killer escalator in Yik Foong Complex, Ipoh!
Next post »
An impressive and elaborate Chinese New Year Luncheon – thanks to Visiber!