A Sudanese student committed suicide beside my condo! (Mystery solved, it was Nadiir's accident)

So the mystery is solved. The death of the person in question was not a suicide. It was a tragic fall by accident. And there are 2 things that contribute to this conclusion which I've just made. 1 is a claim by his good friend and another his blood-sister in real life.

Here are some parts of the response from 2 readers.

… "The student in particular did NOT commit suicide!!!" … "I just want to set straight that his death was NOT suicide!" …"Had you known him as well i’m sure suicide would be the last thing to have crossed your mind."

"Nadiir was my brother, my real bigbrother.
Dint really have a strong relationship with him though !

And it was an accident , i assure yu it was no suicide, he actually fell asleep on his balcony cux he
cant stand heat and there was no electriciy !

Thankyuh for the pics, my family has been dieing to find out where he passed away .
xx"

I don't know how far truthful it is, but I chose to believe the both of them. 🙂 Judging from their claims, Nadiir had been a very nice fellow and he was most certainly not a troubled one with constant suicidal thoughts. I am deeply sorry for the loss of his family and friends who didn't manage to see him for the last time, especially the ones abroad.

God Bless! and thank you for setting the truth straight

One night at 2.30 am I was walking towards my block (where the elevator was) to take me up to my condo unit, I spotted a very rare sight. The green city council garbage can was tied up with 3 orange cones onto the lamp post bordering a specific area. I actually paused to take a 2nd look and wondered why the management had to resort to such measures to curb illegal parking. 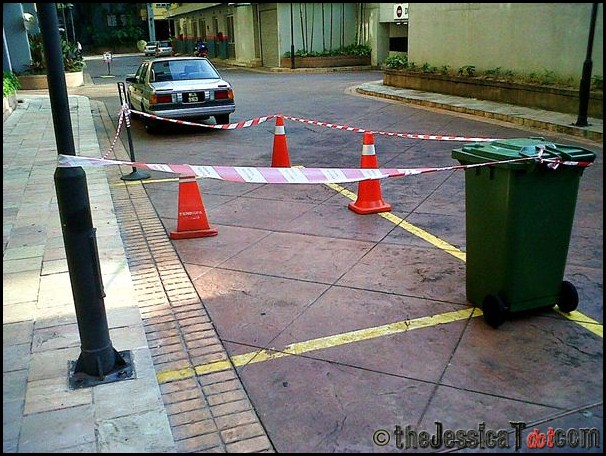 Photo taken the very next afternoon via Blackberry

But it turned out that such strange placements of the aforementioned objects were not intended for parking restrictions. *gulp* As I observed hard at the same spot, something made my head tilt skywards. And I saw this: 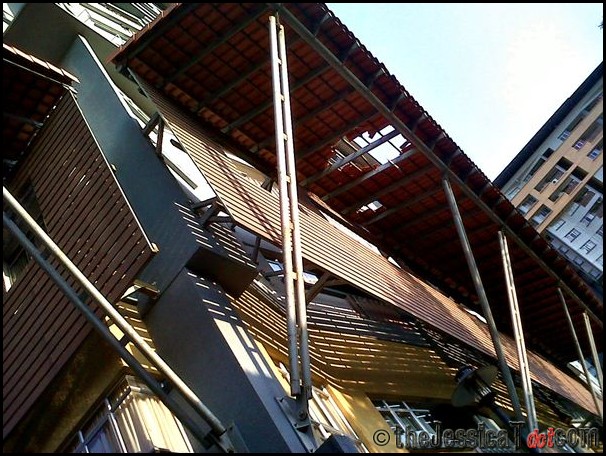 Let's just hope it was a wardrobe that was gravitationally disadvantaged

Good grief! Someone or something actually crashed through the roof and must've landed smashing down to the gravel pavement below! That must've been a really really huge impact.  🙁

Curiosity got the better of me. I then proceeded to ask the security guards what actually went wrong. According to his account, he mentioned to me that a young student plunged to his death a few days ago on the 26th of January at approximately 3.30am. By 4.30am, the cops arrived to investigate and the ambulance came to take the corpse away. 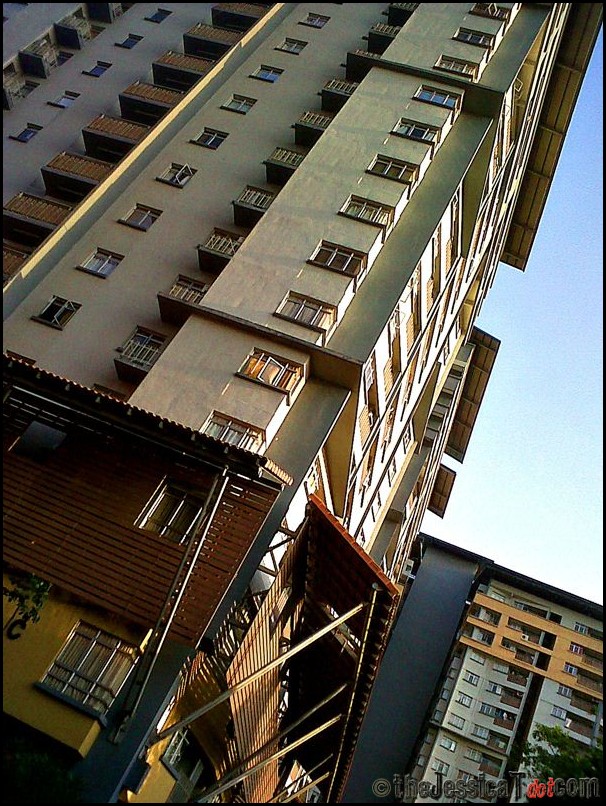 He died on the spot.

I mean, who wouldn't? It would've been a miracle if anyone survived this fall.

I then went home and did a lil research on what actually happened. Here are some snippets according to the Malay Mail Online

The victim, Nadir Mohd Al-Fatih, 23 from Dubai, was found on the ground floor of the common area of an apartment block

I also gathered that the Segi College student fell from his 17th floor apartment. Like goodness gracious. I think I would've been human stew if I ever landed headfirst 17 storeys down. Gosh. That's a really nasty fall, no? But the sweetest thing I discovered was, there was a Facebook memorial page even dedicated to him

A friend, Wisam Gangari who lives in the US, wrote Nadir was "one of a kind, had a heart made of gold, was always there when you needed him and was truly one of the best people you could ever know. We love you Nadir, you'll never be forgotten".

With this, it totally reminded me of the English Literature I used to study back in High School entitled 'Death in the Opposite House'. Only this time and in this case, the death did not happen in the opposite house! It happened right BESIDE it T___T Rest in peace yo.

*gulp* and I STILL have to walk past that pavement every night when I return from events. Ohnoes. Dear God, please walk by my side every night thankewwwwww. I don't deny that I'm still a tad shaken and afraid.