Ever been aboard a battle ship?

Well, I’m proud to say that I finally have!

Boarding one of the United State’s Ship (USS) – the New Orleans, I knew surprises and fun were bound to happen. Well, I guess skipping class for this learning experience regarding a battleship is worth it after all. Heck, they don’t teach any of it in college, do they? ^_^

So off mom and I went from Swettenham Pier in Penang with a speedboat to the USS New Orleans. (that’s not the New Orleans fyi, those are just other lil ships under its wing)

Yes, print this screen and put him on your wall.
I’ve done you (and myself bwahaha) a favour by taking a portrait shot of him

Young and smart white gentlemen with looks to die for and rippling muscles stood in line to welcome us all. Sailorboys. *coughs* Engaging indeed. *coughs* Their drop-dead killer looks would probably make any lady-pirates walk their own plank.

Please break glass to release hottie only in case of emergency
OMGoodness. this. is. an. emergency.
alert!!

Dressed immaculately in crisp uniforms with tough perfectly-built pectorals puffed up forward, their enchanting gaze would definitely… okay, let’s not go there shall we?
*winks*

So anyway. The first thing that greeted us (apart from the aforementioned sailors) were the flags

Camwhored with those imperial flags

I especially despise the staircases. It would upskirt ANYone. Yes I know I was stupid enough to wear a skirt. Argh crap. I didn’t know we were going to tour a battleship; I envisioned a tour of a normal holiday cruise ship… sans the climbing into hideyholes, nooks and crannies. T_T wtfreak

Yes that’s how steep the staircases were.

AND GUESS WHO I SAW??

Doesn’t he look like Harry Potter? ^_^
Well, maybe in a decade’s time, that is.

There were two sailorboys sketching the bearrings and the geographic location of the ship and its immediate vicinity. The huge-ass compass was made as reference as I watch them deftly drafting away their work. oooh~

Totally unrelated I know, but ohwell. knots knots knots, reminds me of my Girl Guides and Scouts movement back in the days

They had a lovely kitchen and a well-kept dining area too.

And sadly, I have not taken even a modicum of anything for breakfast!

Finally, we were out in the open and saw sunshine again. 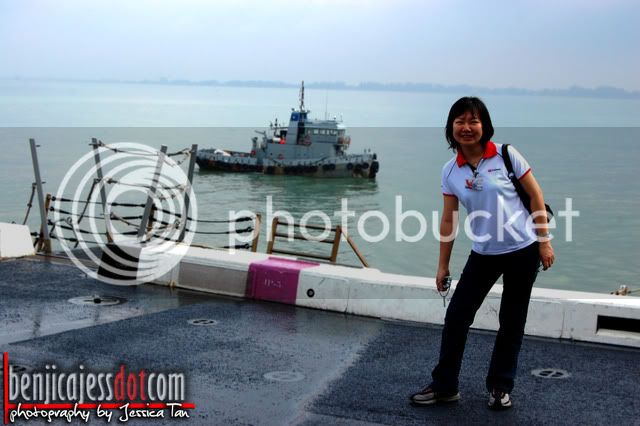 That’s mom and I on the top of the ship, the open-aired deck with a massive helicopter pad.

There were 3 helicopters parked waiting for me to fly it.

But then again, I’d go crashing into canyons and end up as Robinson Crusoe’s successor if I were to ever, ever pilot that helicopter.
darn.

Yes, this gurl is lethal when provoked.
I shoot, not only snapshots but bullets as well?

What Valentines REALLY means to me this year.