Finally found the time to actually make my way here… not that she dreads it; but… hey, she seldom has time for you! =) *I hate refering to myself in the third person* Aiight, anyway.. holidays was a blast! Hmm… not exactly as awesome as my last weekend but, it’ll do. *grins* Ipoh and went on a shopping spree 4times in just a week! Darn.. my pocket’s run dry. Aww c’mon, a quarter for a little girl>? Heck, I could probably buy half a Hacks’ sweet with that.

At the end of the week, was that darn St. Nicholas visit. Not that I actually remembered, but it’s just the most unfortunate thing in the world that I so happen to be the one in-charge. But, it was cool though… in a way. The unpleasant thing was, my eyes just HAD to roam off so far again till it landed on some pathetic dude of 19. (Shut up, Rosabelle!) It’s just one of the lamest things that can’t seem to leave me alone. =/ Yeah, honestly it bugs me. Love my eyes yet hate them so much. Wait a sec-

St. Nicholas’ is a center for visually impaired people, no? Forgive me Lord. Anyway, as I was saying before I was rudely interupted by my righteous half.. yeah, my eyes. It irks me like, all the time. It just depends on the degree of it. *sigh* The thing is, these things always happen out of my will. Sub-conscious but at the same time, so aware. Sadly, it occurs ALL THE TIME. But thankfully, it subsides after less than 3hours. Why can’t everybody be any less charming? Whatev-

The most important thing is that, my partner trusts me. I’m thankful that he understands that it’s just a lame thing that usually comes and goes in just a blink of an eye. Without that degree of trust he has, we would probably be long gone. But then again, no! There’s just this invincible bond between us.. two years with him is just heaven. Well, almost 2years.. but still, it’s a bed of a thousand roses. Love ya boo~

Yupyup, that St. Nick day was just another passing phase of my chapter. It’s whited-out and erased from all memories.. let the maggots deal wit 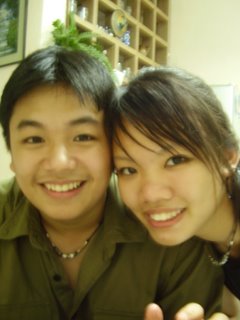 h the remains! =) Now here’s the blast! Last weekend was THE WEEKEND that I never expected would have occured. It was yes, very simple but sweet. Like cross stitches? *lol* Friday was spent with my ever-loving partner and so was Saturday and Sunday! Saturday was Gurney day and the latter was Father’s Day. Yeah, as usual… ma darling cooked up a storm and dad was touched, I tell you! Honestly, it’s sort of because I’d never do or even intend to do something like that for that God-forsaken bastard. =no regrets= Just finished half a tube of Lays’ Sour cream and onion potato crisps.. *burp* and watched Scary Movie. Haha. Indeed a simple life. Wonder if I could be an intern just like Paris and Nicole… it’s just absurd but, no harm in imagination right? *winks* It’s just a phase that I’m going through… I’m always looking for something new… blabla.. He’s too fast for me to catch his words.

Oh.. thousand apologies. I was just listening to Enrique Iglesias (however you actually spell that) -Not in love. Why does the time seem to freeze when I’m not doing anything?

Darling’s still in college now. Hmm.. guess I’d best be off. Need to have my rest.
zzzzz