A continuation to the preview of the concert on my previous post, this is it! The full coverage!

Gosh it was fabulous to no end! Firstly, I must applaud Kelly Clarkson herself for being extremely punctual! Unlike all the other concerts I've been to, the opening acts take forever to play and the crowd had to wait for hours on end for the "diva-like" main artiste to finally appear on stage.

She began slightly after 8pm after opening acts Suki and Jaclyn Victor (both winners of previous Malaysian Idol seasons) and kick-started her All I Ever Wanted tour  – not keeping her fans waiting at all! 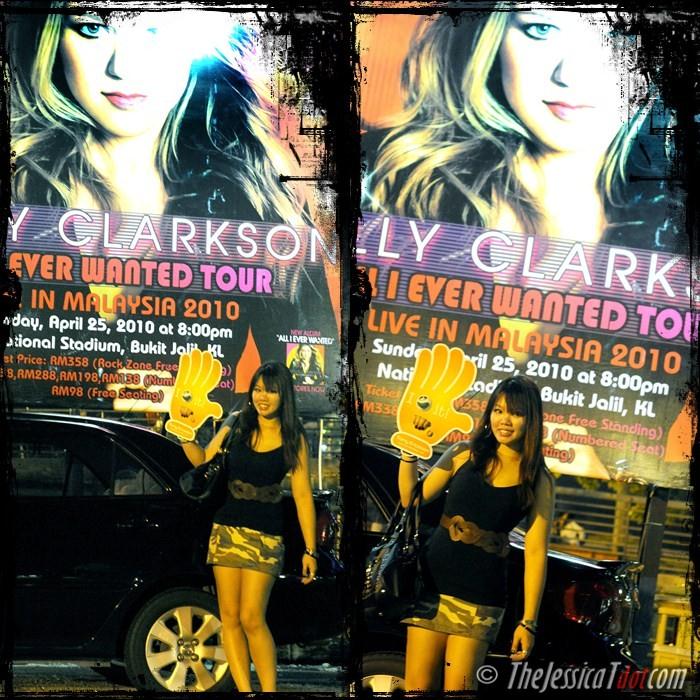 Me at the Kelly Clarkson gig 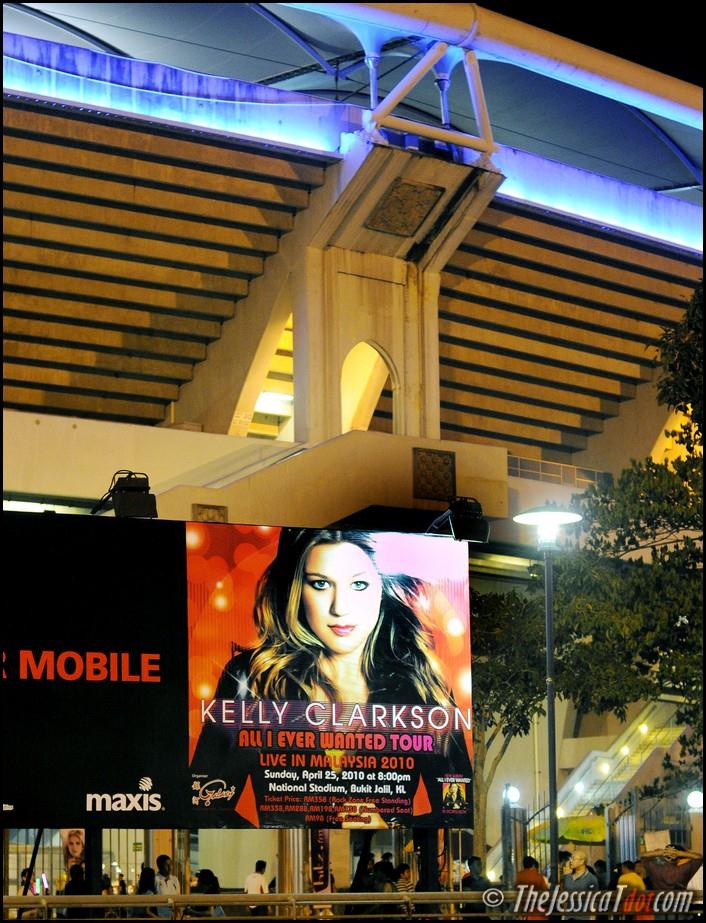 There were loads of people thronging the stadium already!

When her limo arrived, the whole stadium broke into a huge cacophony cheering her on and almost immediately. Singing 'All I Ever Wanted' and rockin on hard with her band members, Kelly catapulted the her fans to the skies! Finally… we see her in the flesh.

That very plucky & talented winner that was crowned the 1st American Idol! 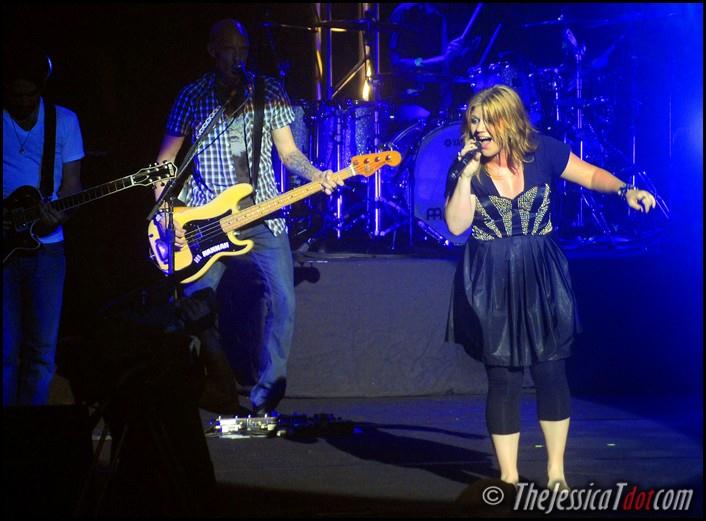 She's still kickin' it till today 😀

Keeping the spirits highly strung, Kelly continued her kick-ass performance with an old fave 'Miss Independant'! Gosh. That songs goes back to a long long time ago! I totally remember singing along to that track during my High School days.. especially yelling out the chorus! 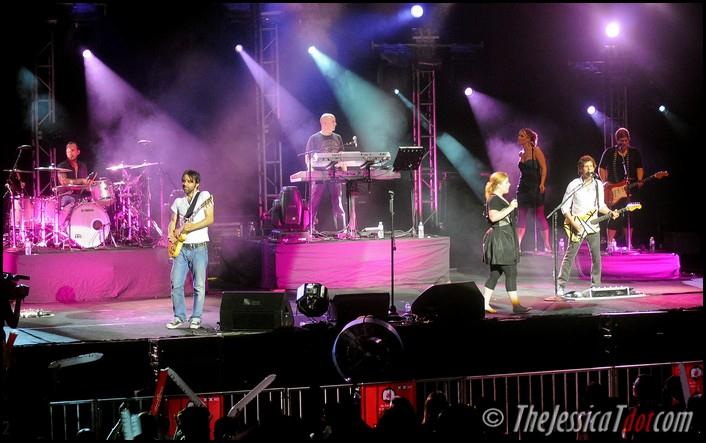 Like a back-to-back hit, our star of the night belted out 'I Do Not Hook Up' and it was evident how energetic she was on stage. That lil miss perky pranced around while singing and "communicating" with her fans the whole time. For a moment there, it felt as though this was Idol itself – with her performing right before us. 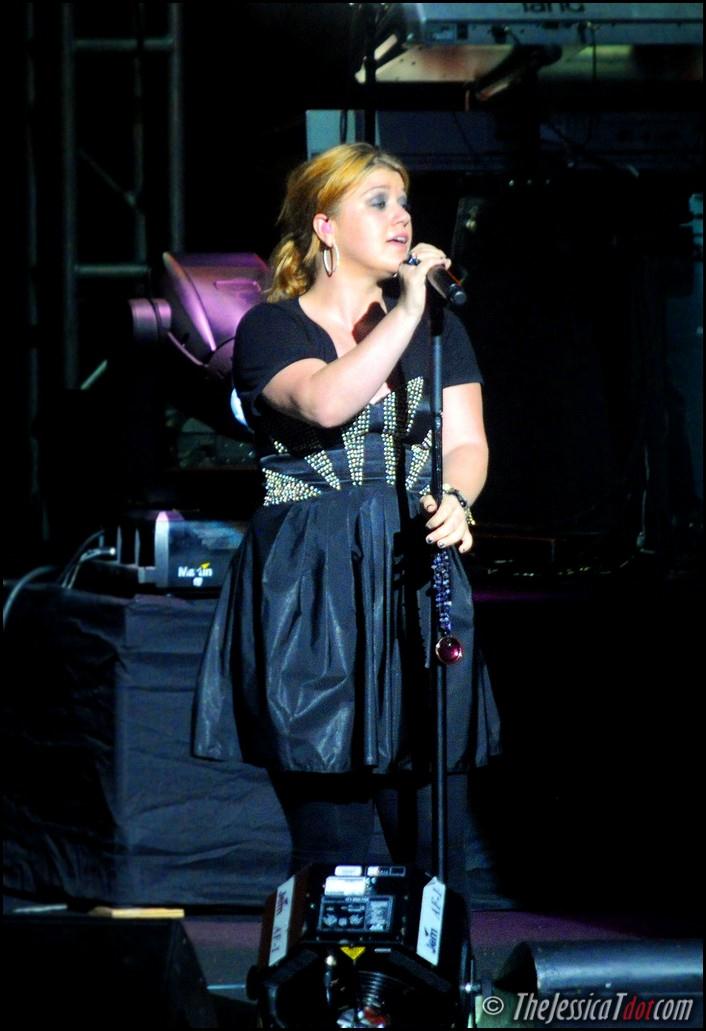 Lotsa emotions were conveyed through her facial expressions

could be seen clearer through the big screen though! 😀

After those 3 songs, she took a pause and introduced herself. Babe! You don't need no introduction! She then shared with us one of her newest songs entitled 'Impossible'. This was slightly more mellow compared to her previous fast rockin' tracks. 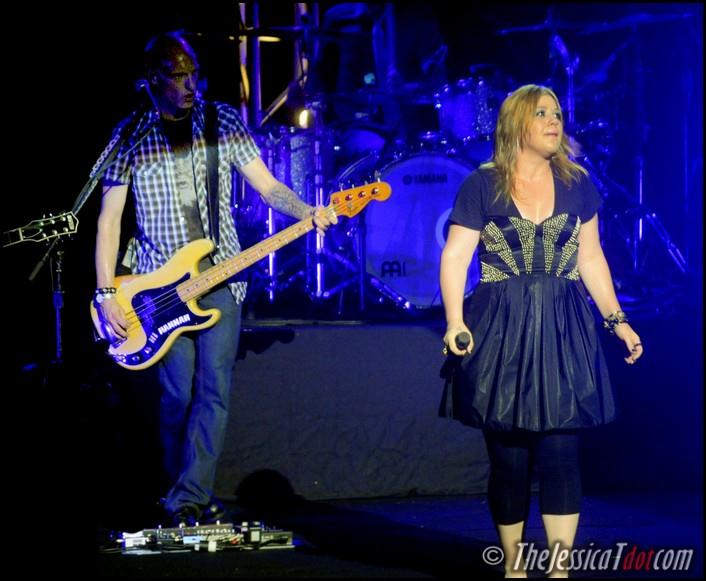 Our dear Kelly began to tell us that everyone seems to be asking her what she listens to, what kinda music she digs and so on. So right there right now in the arena itself, she told us that she's a fan of Kings of Leons and Alanis Morissette. 😀 Good taste woohoo!

Thus, she performed her very own cover of 'That I Would Be Good' , an original hit by Morissette herself. 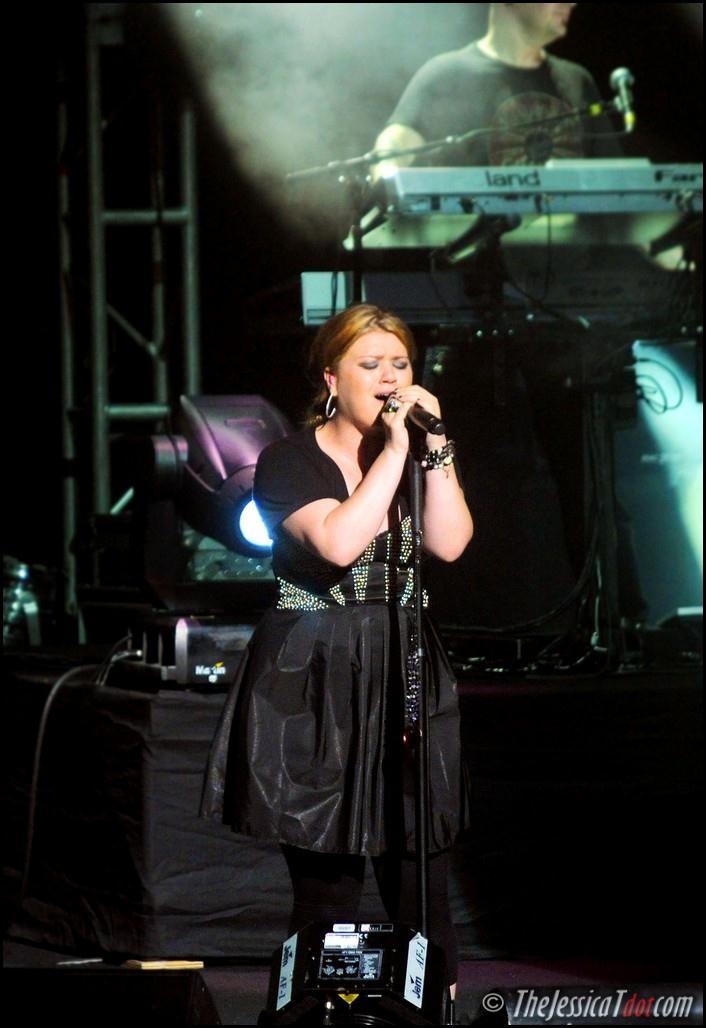 Kelly singing with so much conviction 😀

Her next song was the very popular chart-topping hit 'Breakaway', songwritten by none other than Avril Lavigne. Believe me, she was amazing when she stretched her vocal chords to sing this song and yes, it was indeed a very powerful voice. Almost everyone on my left right front and center was singing along to this too – including myself! 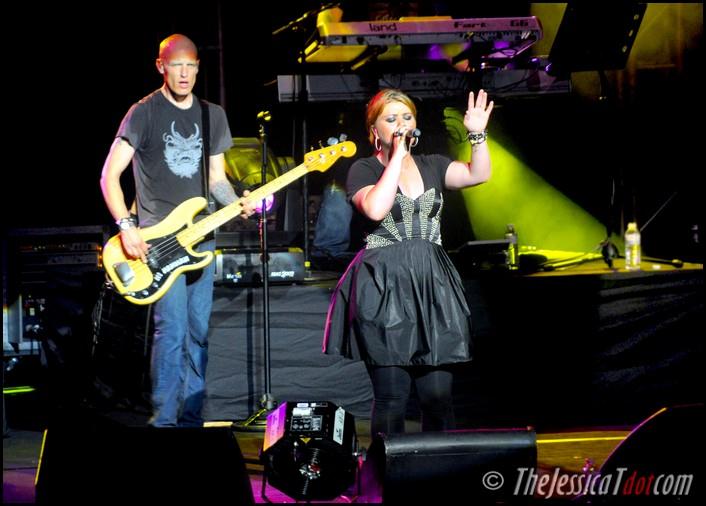 I'll spread my wings and I'll learn how to flyyyy~

I'll do what it takes till I touch the skyyy~~~

Make a wish, take a chance, make a change~

On her roll of singing her own covers of popular tracks, her next improvised version of a song was Kylie Minogue's 'Can't Get You Outta My Head'. I'm personally not a fan of Minogue but as expected, our Kelly Clarkson did a superb rendition of the aforementioned song. 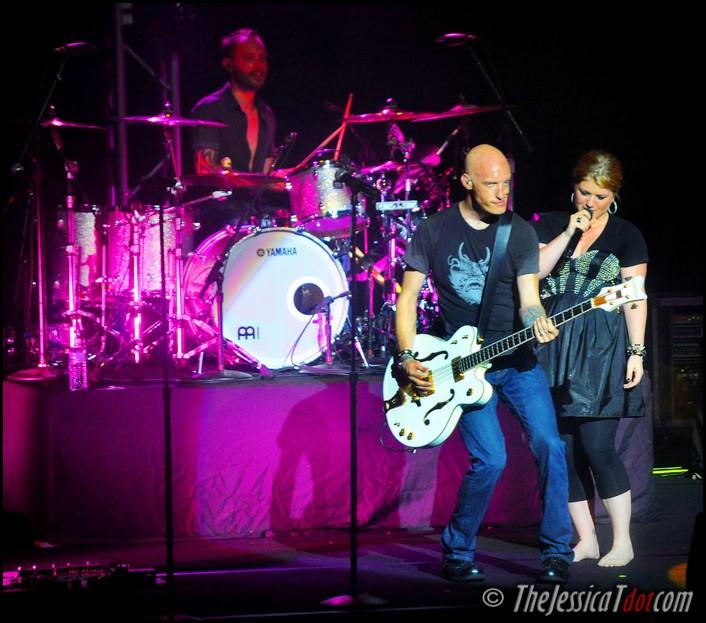 As she wanted to be able to sing us all our favorite songs, she also intended to share her not-so-popular songs to the crowd. A good mixture of variety is always good! Her next performance was 'If I Can't Have You' just before the powerful and angry rock-driven 'Never Again'.

That's one of my faves! I can relate to the resentment and hatred apparent in that song itself and most of us all yelled along to that! 😀 woo hoo adrenalin rush yo! 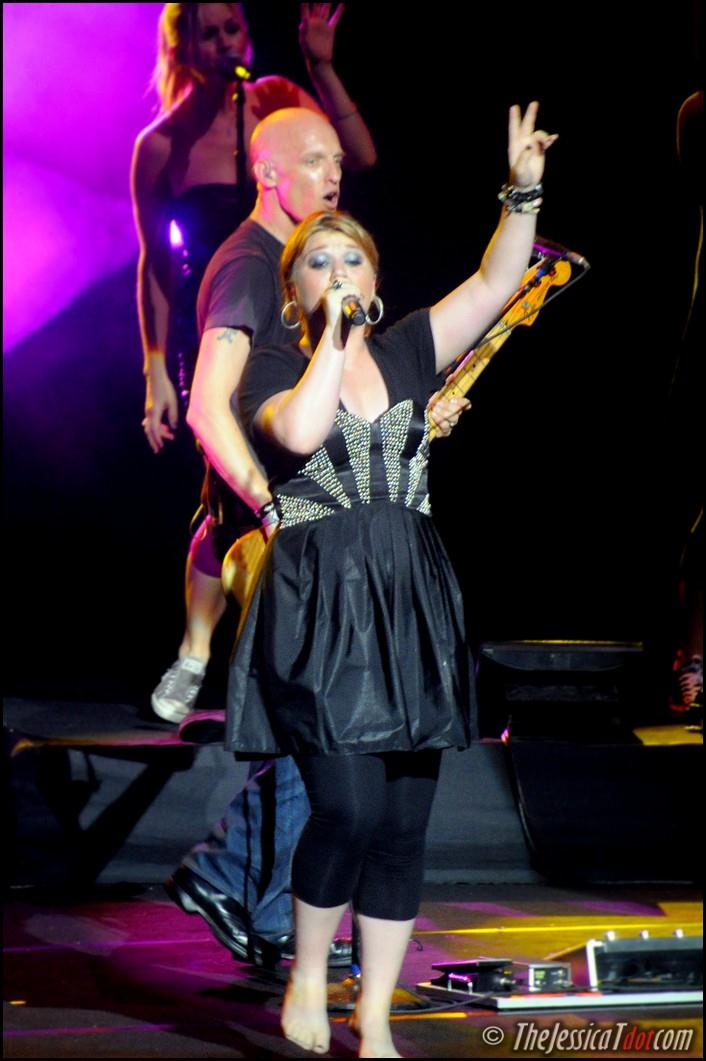 Never again! will I hear you~

Never again! will i miss you

Never again! will i fall to you

Bumped into a few friends too during the gig. 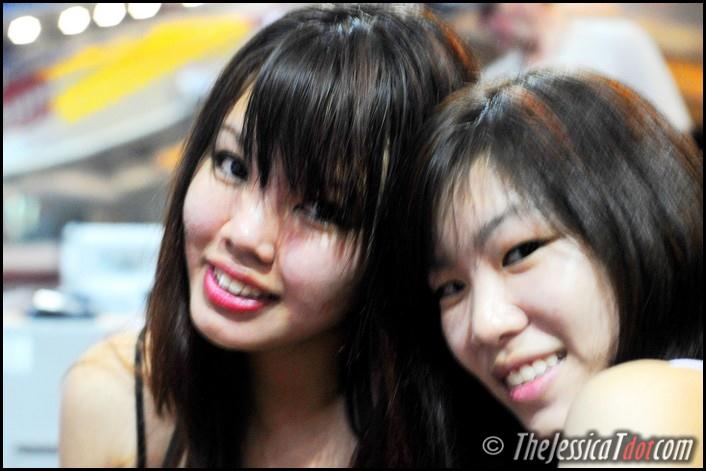 The next few performances was also her own covers of a song called 'Lies' and 'Tonight I Want To Cry' by Keith Urban. She mentioned to us that she grew up with gospel music and will always have that soft spot in her heart.

Right after those, she and her band members put together a very very melodious acoustic medley for us tonight 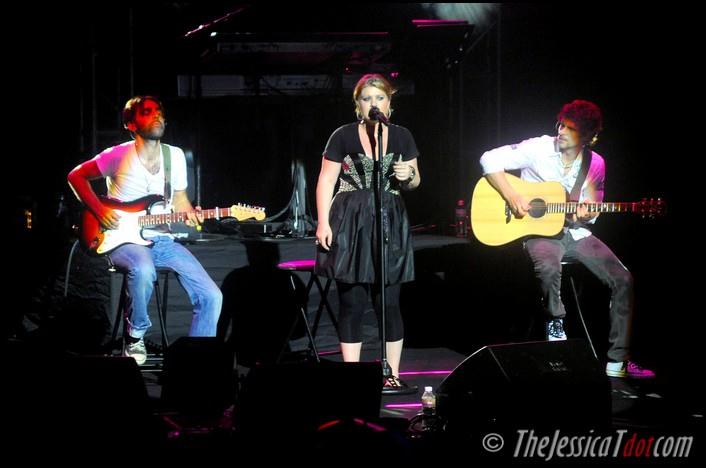 A huge contrast to her earlier mellow and harmonious acoustics, she then drove the crowd in a headbanging and roaring frenzy with a popular favorite 'Behind These Hazel Eyes' Of all my favorite songs of Kelly Clarkson, this is by far the one that strikes me the most. Love it much! 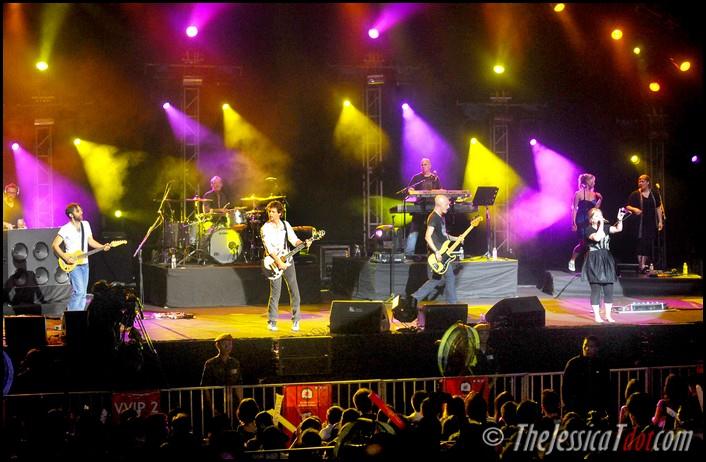 Swallow me and spit me out~~

For hating you I blame myself~~

Seeing you it kills me now~

Now I don't cry on the outside…. ANYYYMOOREEEE!!!

Scream scream scream! All night long. She then sang 3 more less mainstream tracks 'Cry', 'I Want You' and 'Don't Let Me Stop You'. They were equally as good! It's a actually a fab idea that she performs not only her popular hits.. because prior to this, I don't think I've ever heard much of those 3 songs 🙂 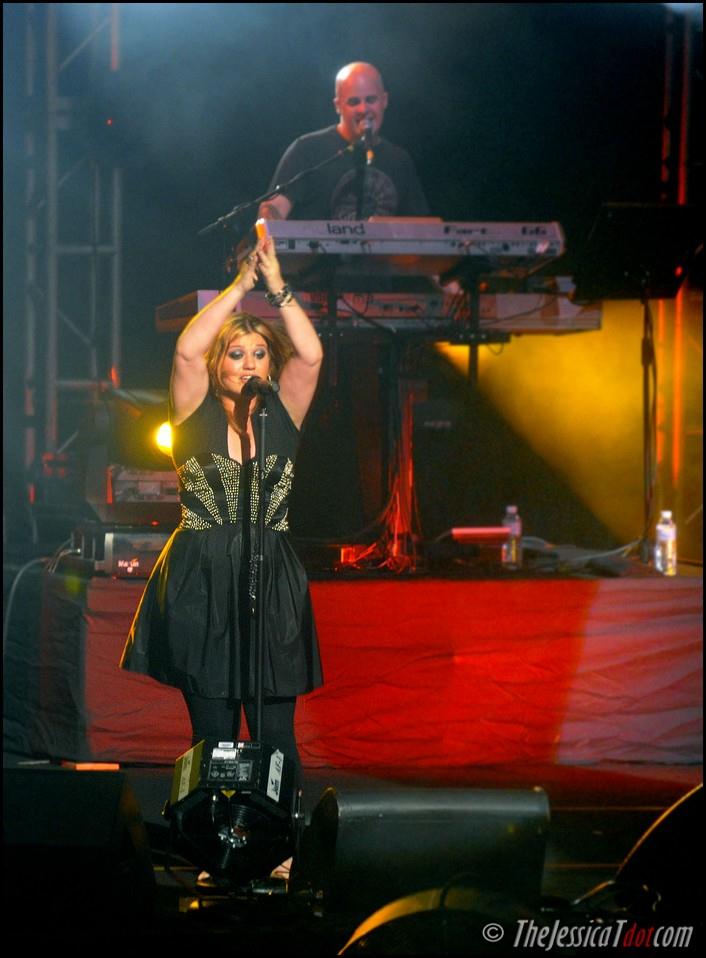 It was time for the flashmob planned by FLY.fm. As it was her 28th birthday, suddenly the crowd sang her a 'Happy Birthday' song just for her! She heard it the moment it was sang and we all could see the glimmer in her eyes. Kelly then acknowledged the kind gesture by saying 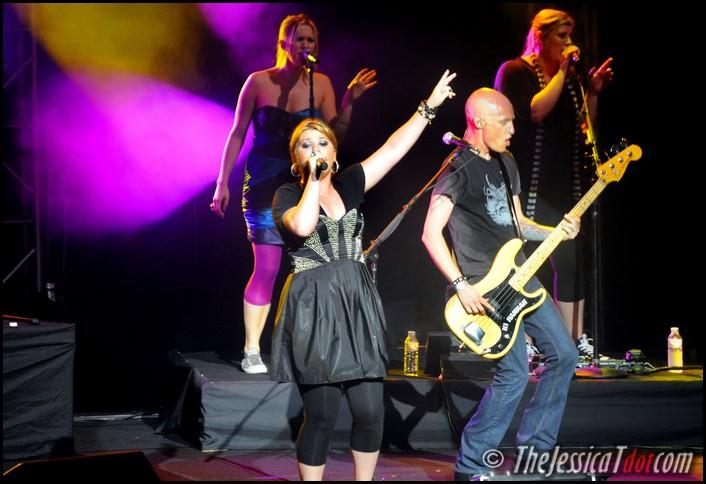 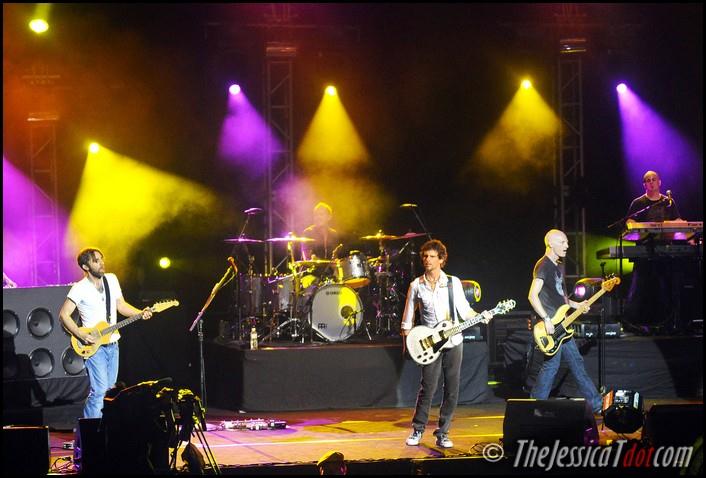 Soon after, she gave a tribute to band mates and introduced each and every one of them to us. They were her "second family" according to her and that she spent "300 days a year with them" and broke into a laughter. So we had a closer look at her back-up singers, her keyboardist (who had been with her since Idol days!) her guitarists, her drummer and the DJ. 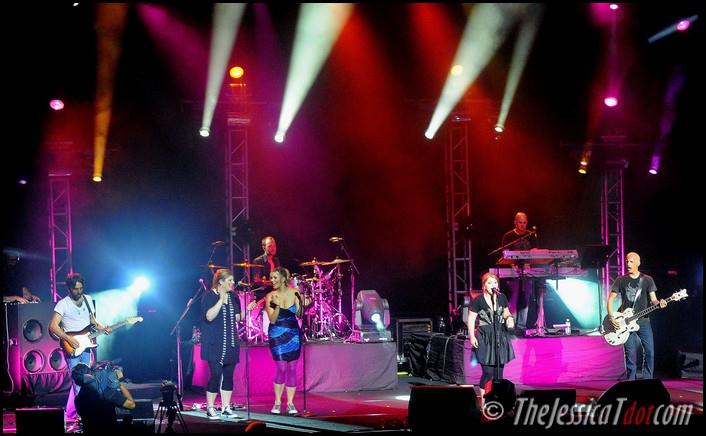 After all the emotional moments, she brushed it aside with an equally emotional song 'Because of You'. Now, lotsa you readers have been asking me if she did sing this song. OF COURSE SHE DID!! 😀 😀 Her concert will never be complete should she not include this too! 😀 😀 woo hoooo!

This song is very nostalgic to her as she wrote it since she was a child and has never ever expected to be playing her childhood scribbles right here in Malaysia! 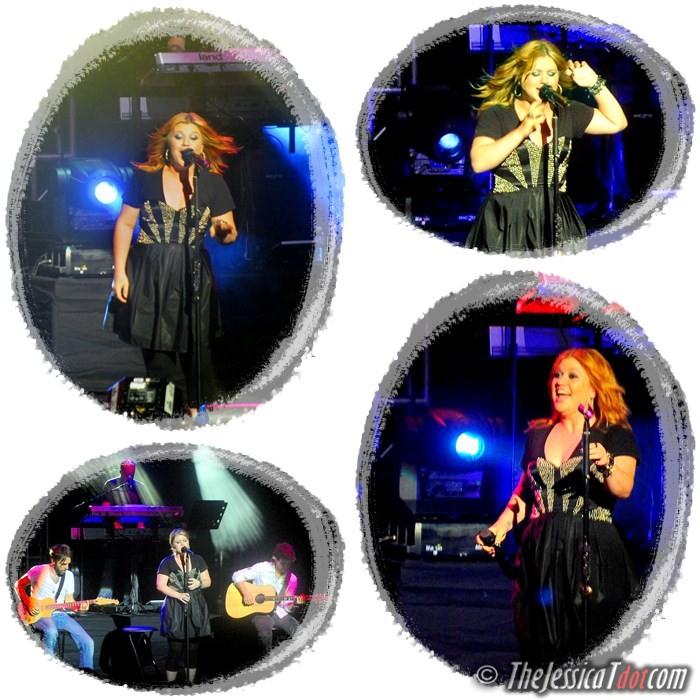 Her next few songs were also crowd favorites 'Walkaway' and 'Since You've Been Gone'. Good lord you should have seen how insane the crowd went during those 2 songs! Some ardent Kelly fans around me were standing and jumping on their seats waving their hands and thingamajigs wildly in the air! 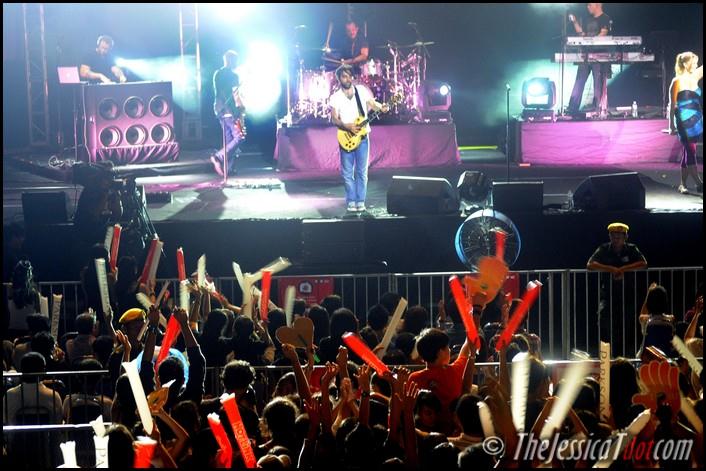 Next up, she sang 'Already Gone' and likewise, I could see the crowd holding each others hands and waving them slowly in the air into a harmonious metronome and singing along to the lyrics by heart.

Oh and I totally did not expect Kelly to sing a cover of the White Stripes as well! I used to love this song back in High School.. I bet most of you would recognize its catchy beat the moment it plays too! It's 'Seven Nation Army' of course 🙂 The bass is really strong here and boasts a rockish tune to it too 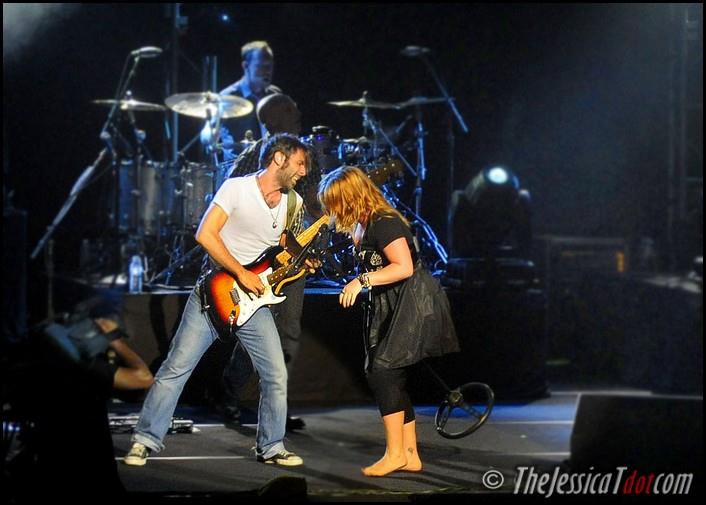 Kelly chose to save the best for last. Shooting the fans over the moon and back to earth again was 'My Life Would Suck Without You'

As I was leaving the stadium (to avoid the massive gridlocked crowd at the exit) I shot the video of this performance with my Blackberry. Don't expect HD videos like all the previous ones I shot with the Olympus PEN okie 😀 It's basically just to show you dearies how insane & very hyper the audience was during her concert!

My life would suck without you Kellllyyyyyyyy!!! 😀

Loved how she was prancing around the stage all sweaty and totally carefree! Now, this is one down to earth and simple young lady who isn't as prissy or typical as other artistes. She even mentioned that she likes being all sweaty and hot, knowing that all of us were too! 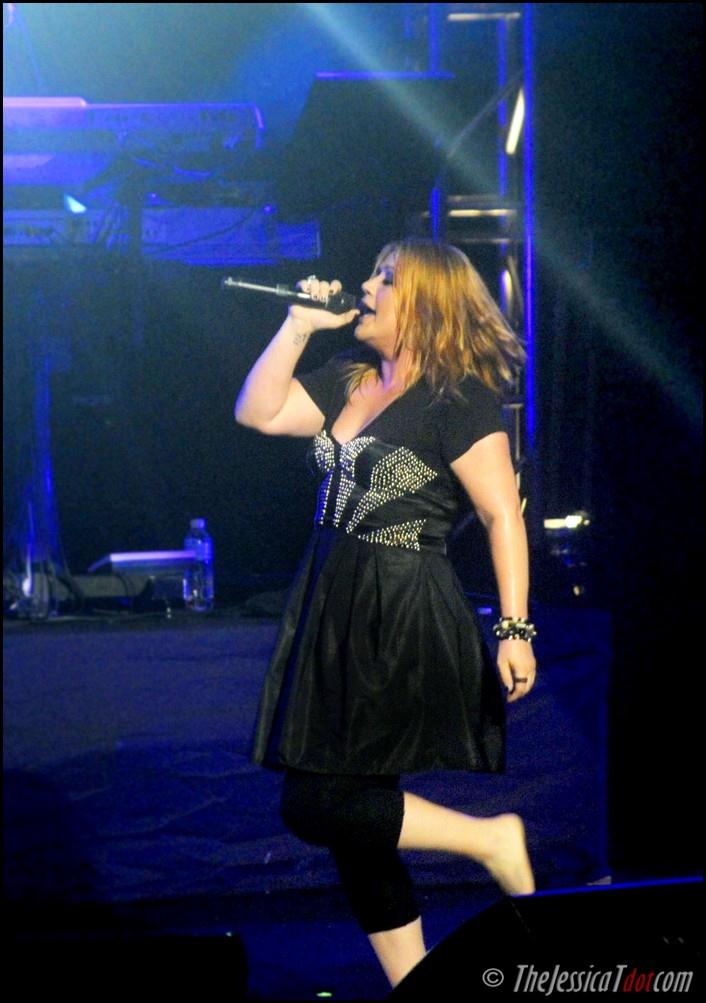 Kelly in her element

All good things must come to an end though. The once brimming full stadium was now completely empty, as everyone was making a beeline to the exit. It was a fabulous night for me and buddy Azaria (who was sitting beside me) nonetheless. I enjoyed the concert to the maximum and her company along with many others as well. Psst – thanks dearie for "you know what" NINJA STYLE ahahahah. 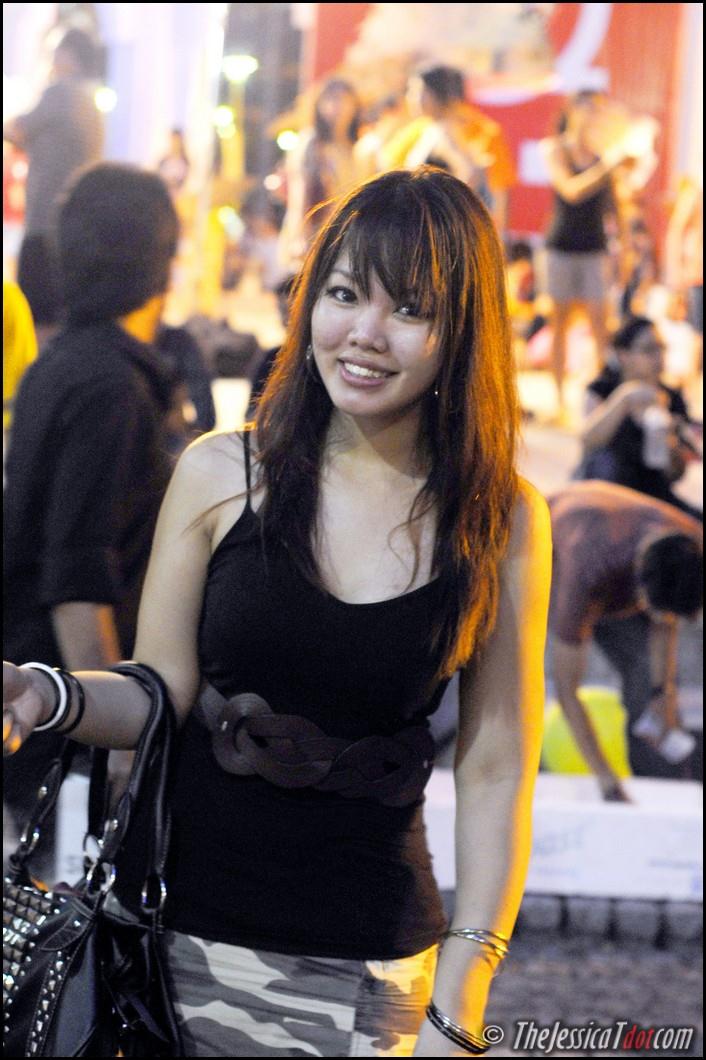 Took a few more piccies with friends after the concert ended 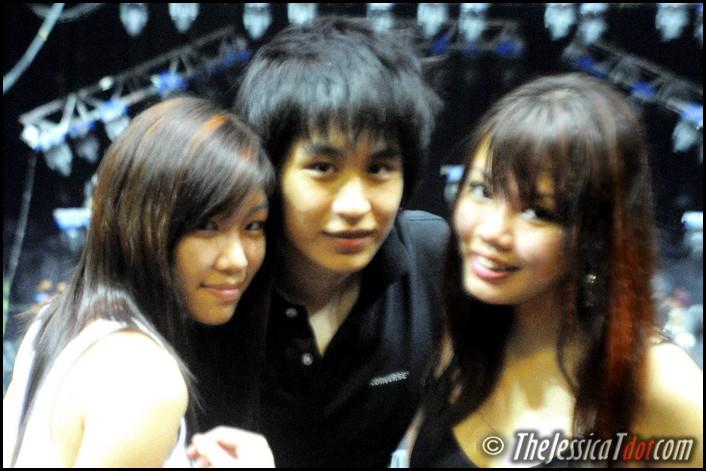 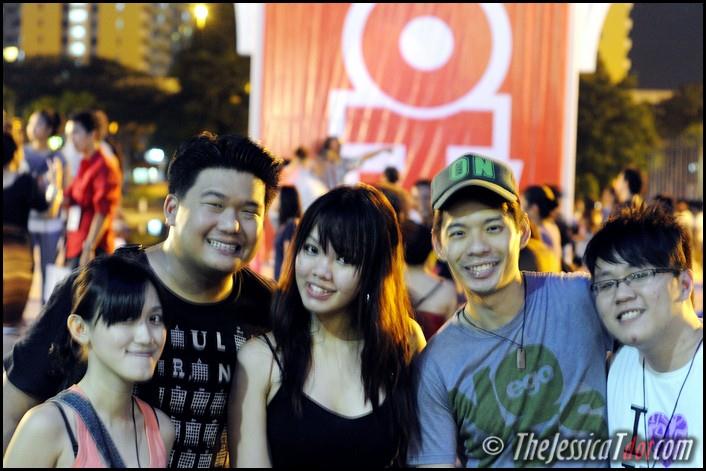 All aboard the Kelly Clarkson FLY.fm party bus! Well… not for us though, as we had our own rides. My ride is Niki's car! 😀 Thanks fer the lift pal! xoxo I IMPLORE ALL OF YOU READING THIS TO GO HOMMMEE AND LISTEN TO KELLY'S SONGS IN YOUR SLEEEEPP NOWWW! 😀 😀 😀 😀

Though never as good as the live performance, her CD is still fabulous all the same. 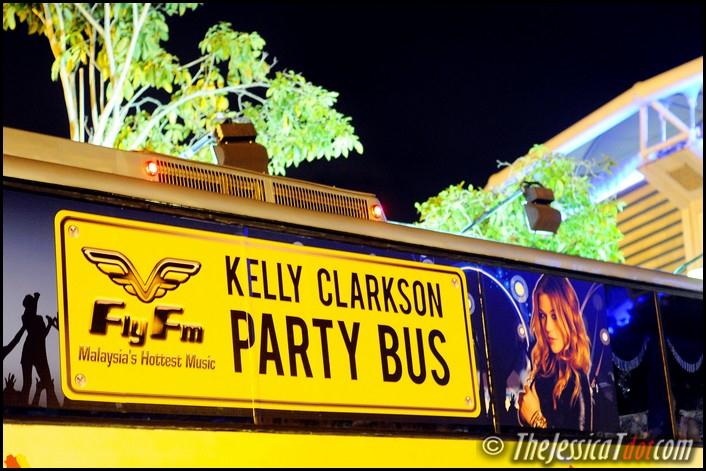 Hope you'll feel like you didn't miss a thing after reading this!