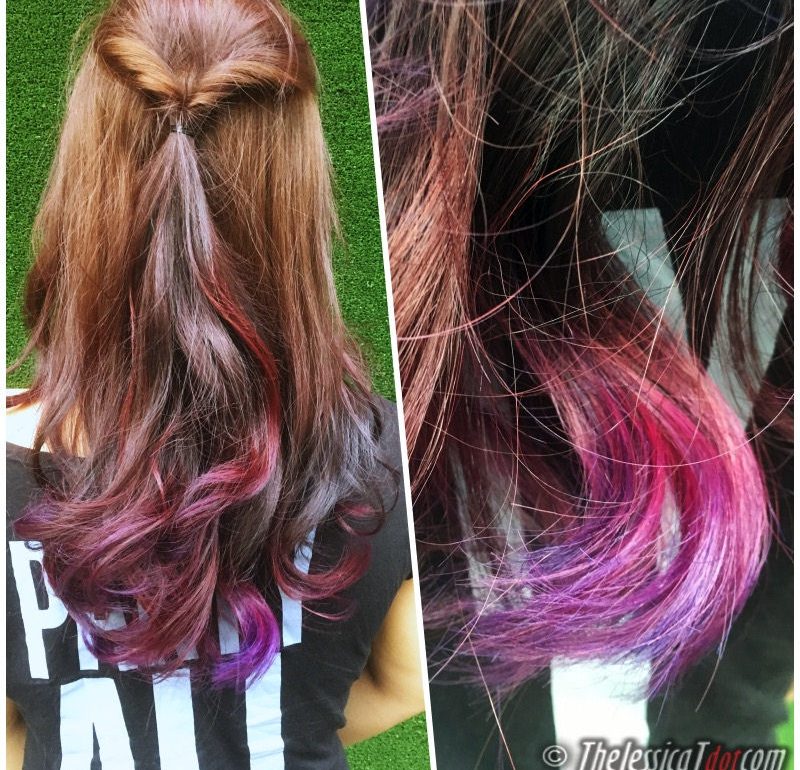 Note: This post was supposed to be published in June 2016 (last year!) but it got stuck in my drafts and never saw the light of day! 😣

So let’s begin. As most of you all know, I’ve been a redhead for the longest time.

The moment I graduated from high school, it was the day where I no longer had to stick to the confines of being black-haired, as the school rules dictated. So, ever since I was 17 years old until well… just before today, I keep turning myself into a redhead with every visit. 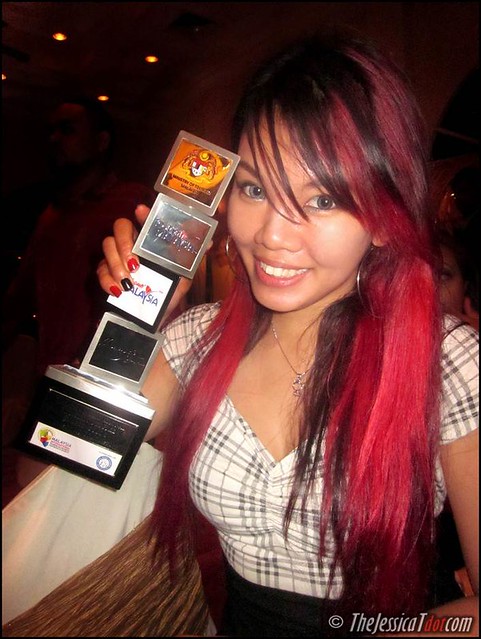 Back then, I refused to let any of my hair sponsors dye my hair with any other colour.

Yup – only bright, crimson red. And nothing else. 😤

Read on, to see how a redhead turned brown for the first time!

Having red hair was my signature; almost like a trademark of TheJessicat. That red-haired blogger, where all my friends fondly refer to. But as I grew up, those angsty flames that were my full head of red gradually toned down to ombre red instead.

Yes mom and dad, I do realise you can’t really take a 27 year old adult seriously in a corporate working environment if they have a full head of red hair.

LOL. To think that I would never change my hair colour in a million years – that remark sure sounded like a long time ago. 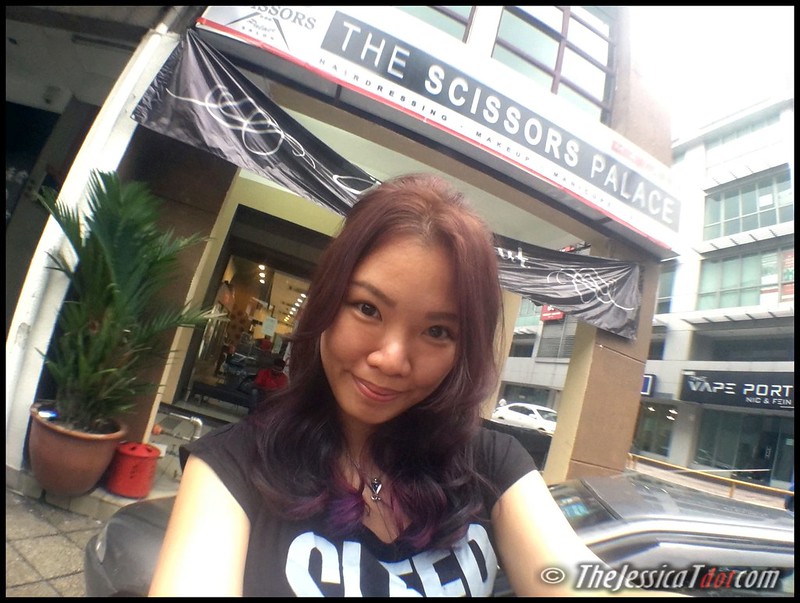 And now, today, those million years have long gone and I’m now a brown-haired girl.

I know brown is a relatively common colour. But Davis of The Scissors Palace gave me a fresh, chestnut brown cascading down to purple – that I absolutely adored. 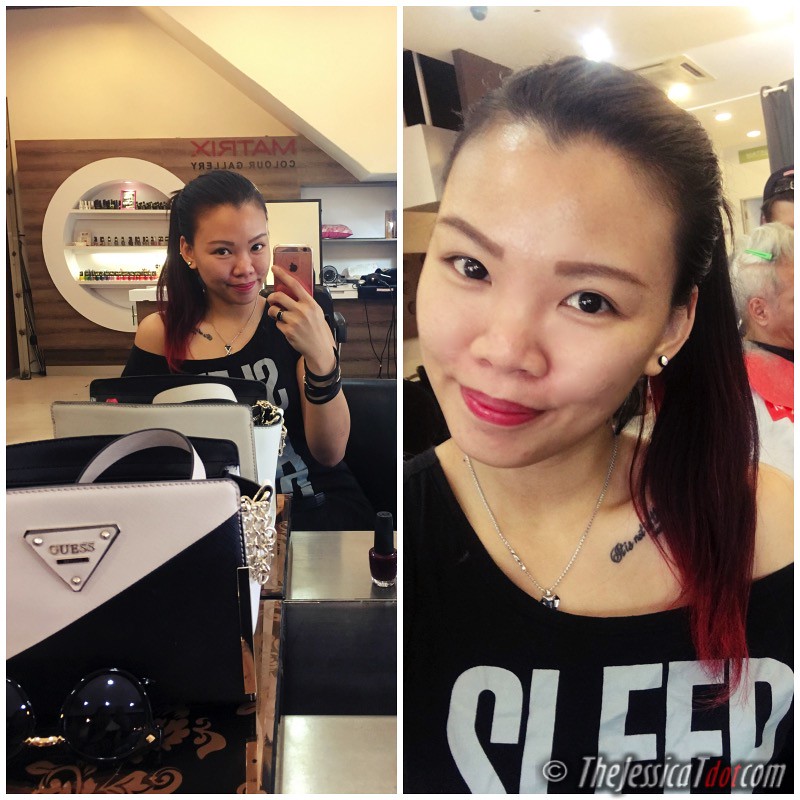 You can still see my red ombre tail here!

We started with a consultation, with Davis the Hair Ninja.

If you didn’t already know, Davis is one of the most popular local celebrity hairstylists as he has worked with many well-established and famous celebrities, commercial shoots, brands & magazines. His portfolio include Men’s Health Magazine, Harpers Bazaar and Hanger, to the likes of styling local personalities such as Sazzy Falak, Yasmin Hani, Azrel Ismail, Azwan Ali, and Joey G, to name a few.

Also, he recently made the list of Top 100 most Influencial Entrepreneur of the Year 2016. Congrats! 👏

But when Davis isn’t busy being glamorous, he can be found being super hands-on in his very own salon.

Go catch him if you can! 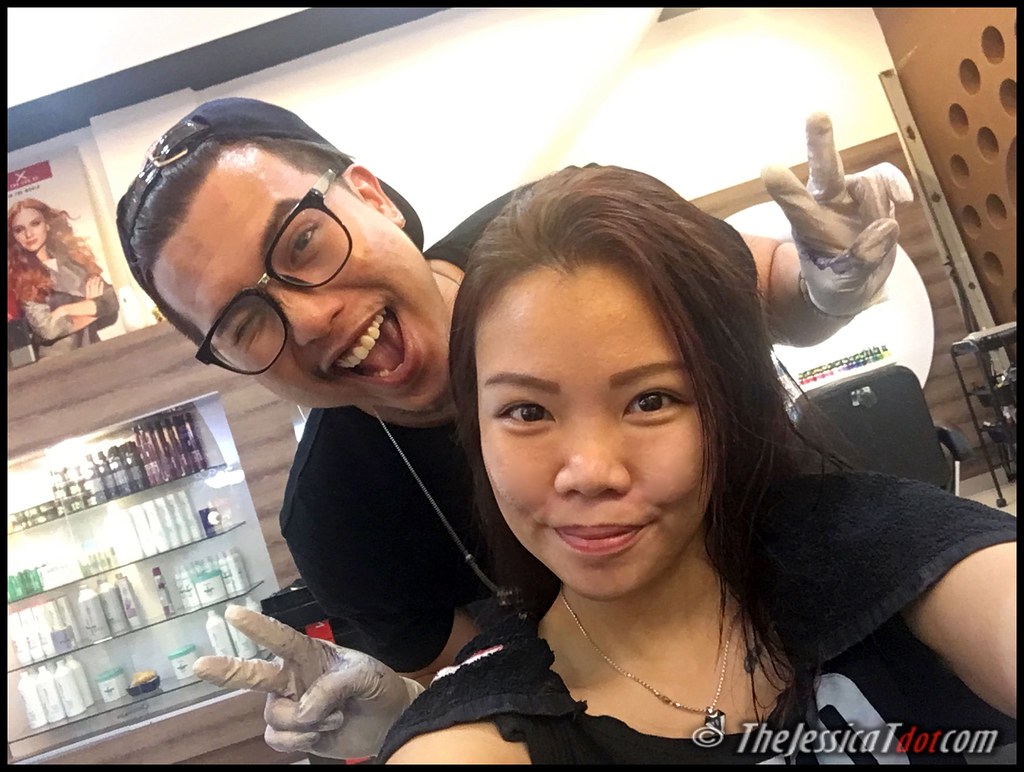 You know how almost every customer requests for everything under the sun in hopes of the hair stylists to conjure magic for their hair, just like the glamorous crowning glories we see in those glossy pages of fashion magazines?

Davis very professionally burst my bubble when I wanted the impossible – especially when I didn’t know what’s actually good or damaging to my hair in the long run! I also wanted back my short bangs, but he very confidently told me to trust him and to do away with the bangs for once.

I agreed and let him work his magic 🙂 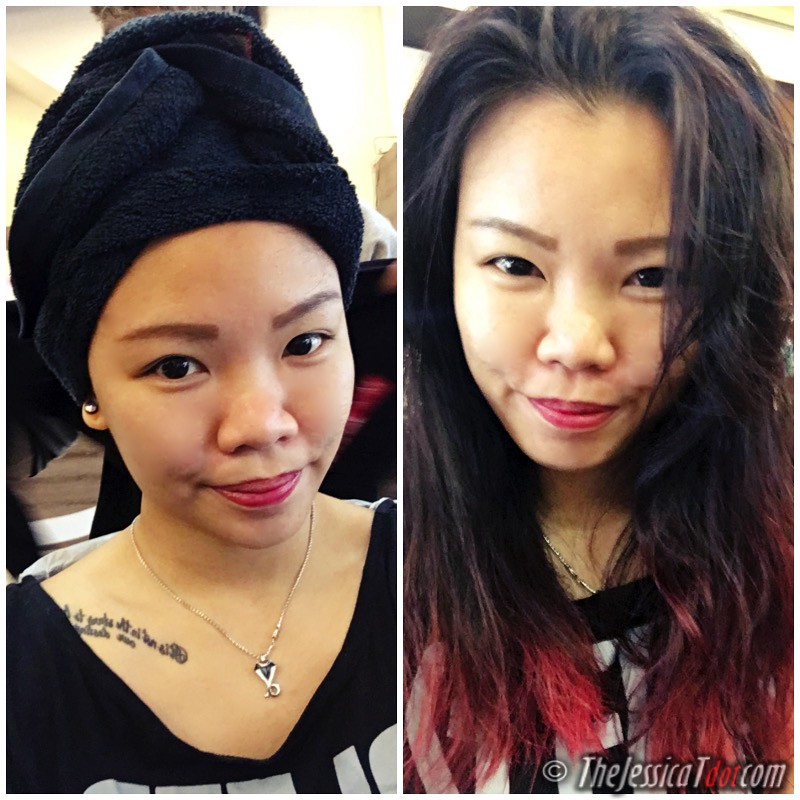 A wash + head massage; imperative before any hair service 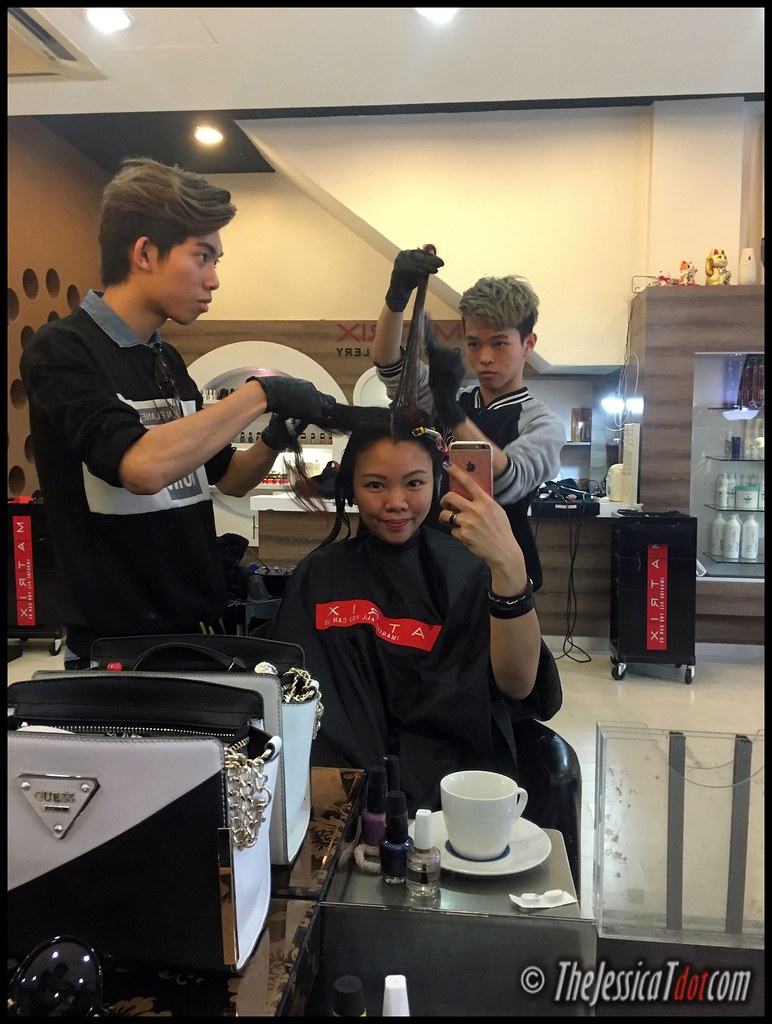 His accomplices, the young padawans, Jayden & Daniel assisted with the dyeing. 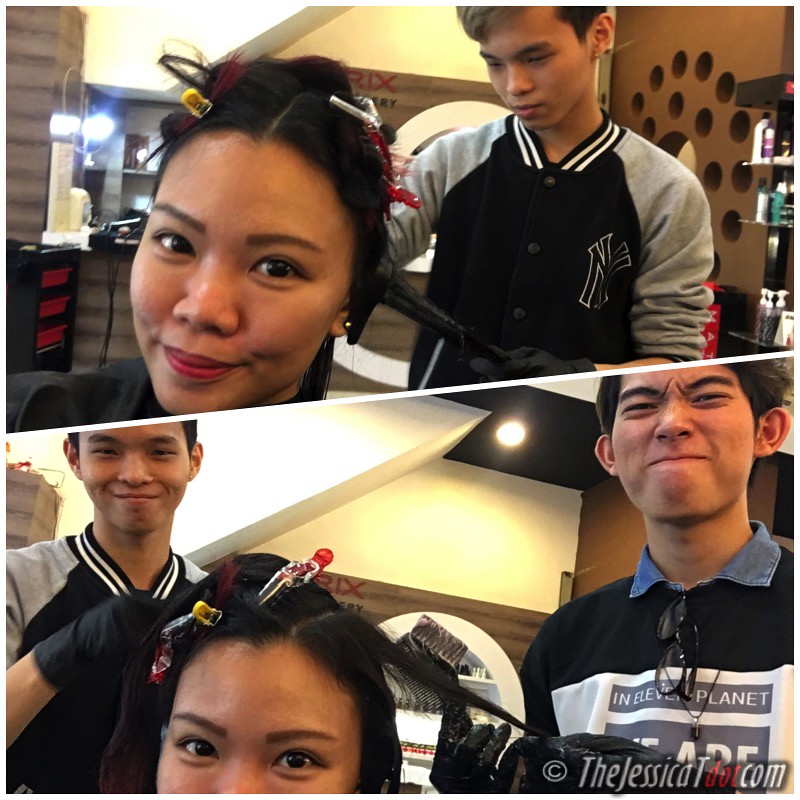 They were such a fun & friendly bunch! I had a superb time chatting with them. 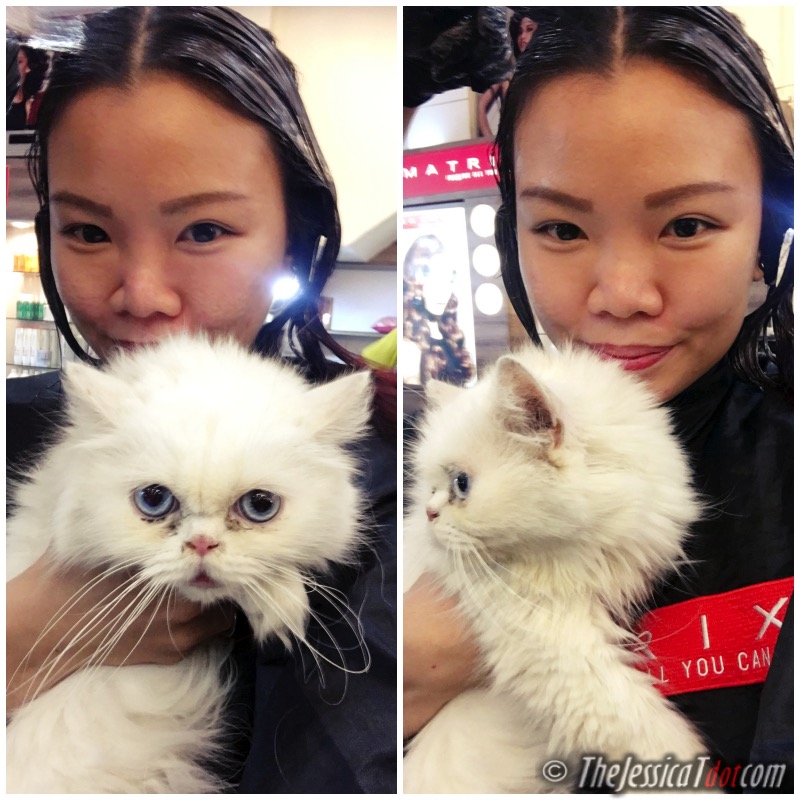 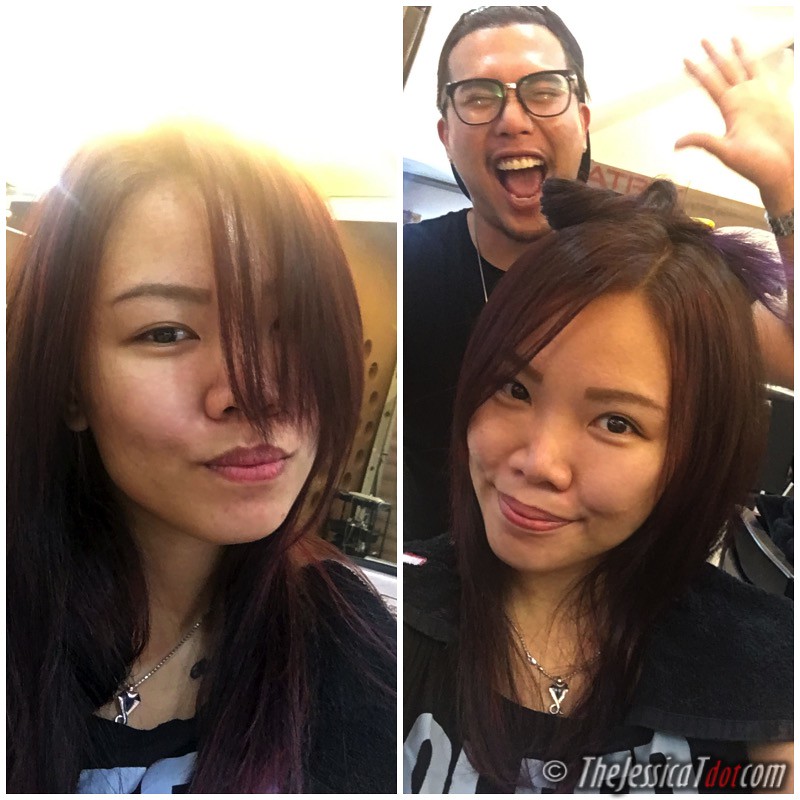 After washing & blow drying, it was now time to pass the baton back to Davis to cut & style it.

He also put a purple dye on my ends! 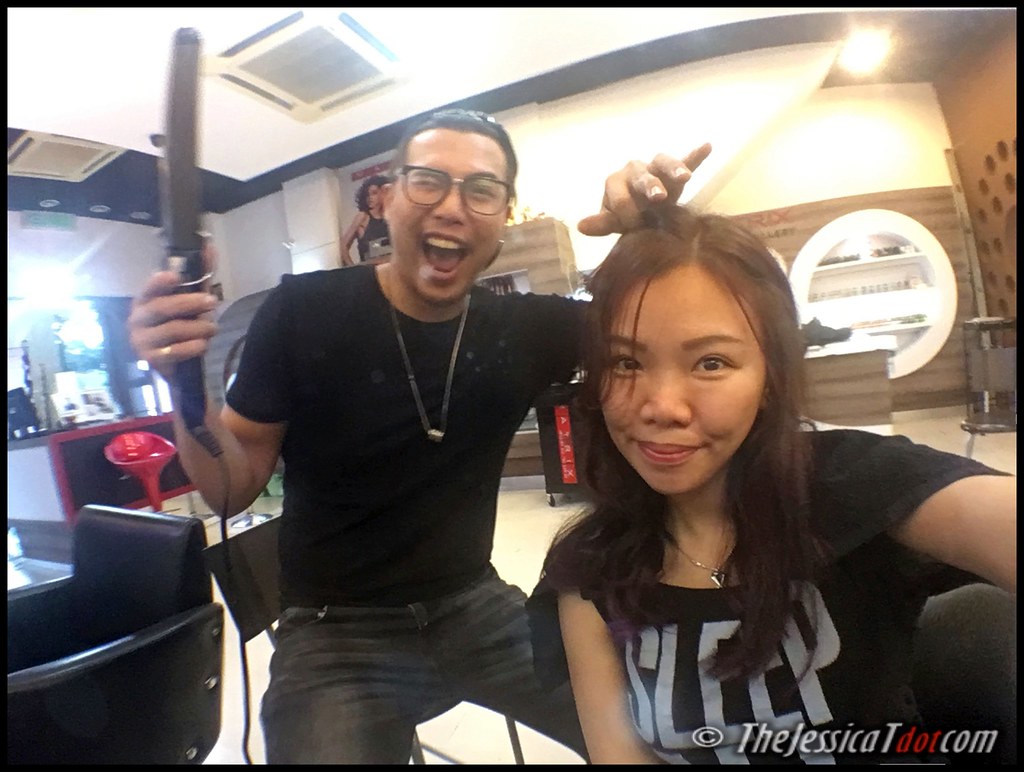 In case anybody doesn’t know, Davis has just opened up a branch in Penang too, dear homies!

The salon’s name is HEADLINES and its located in Butterworth. 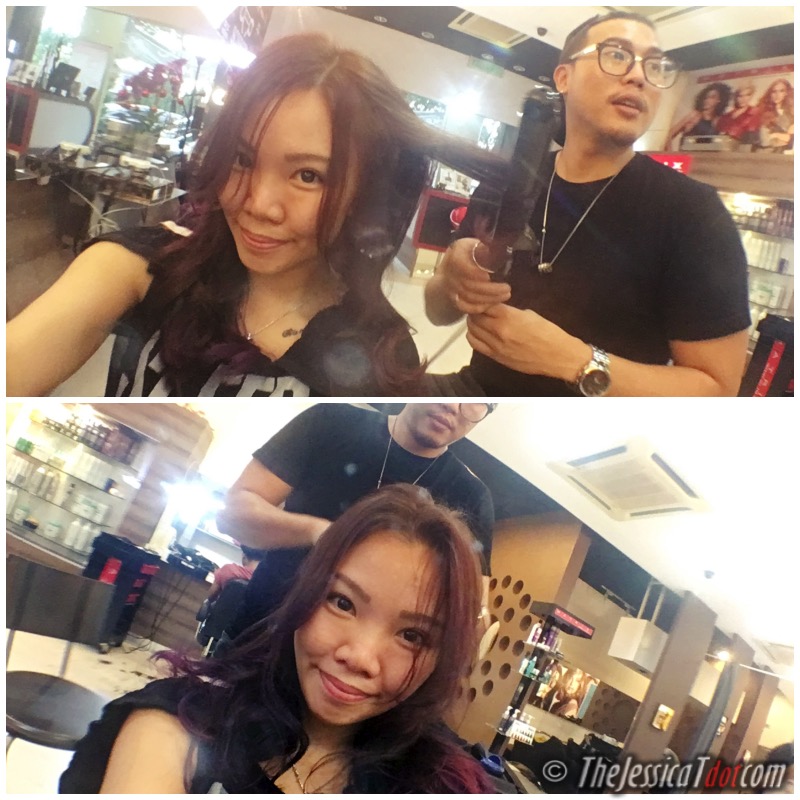 Here he is, giving my hair voluminous curls with a huge barrel tong 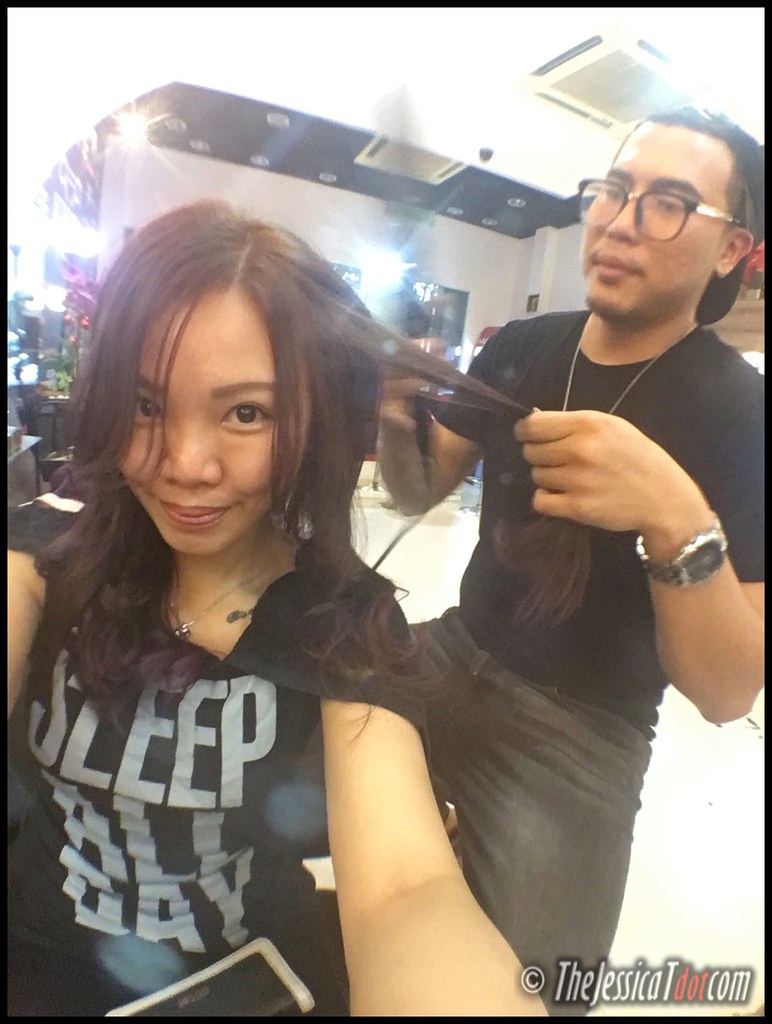 Looking serious with his tools of the trade.

I was so excited to what the outcome would be, that I did not realize that I was already running slightly late for the MARKies Awards 2016. Here’s a quick selfie the very moment it was done. 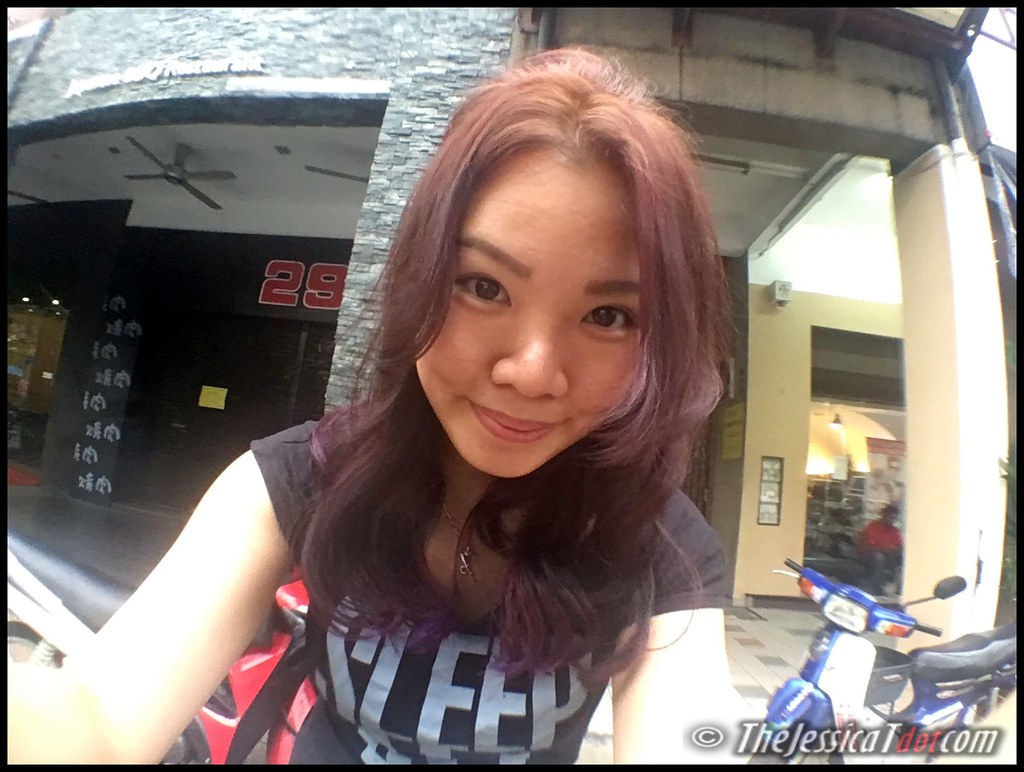 To save the best for last, Davis came out in time to help me take a much clearer photo of the results.

I was amazed – haven’t gotten my hair this glam in a long time! 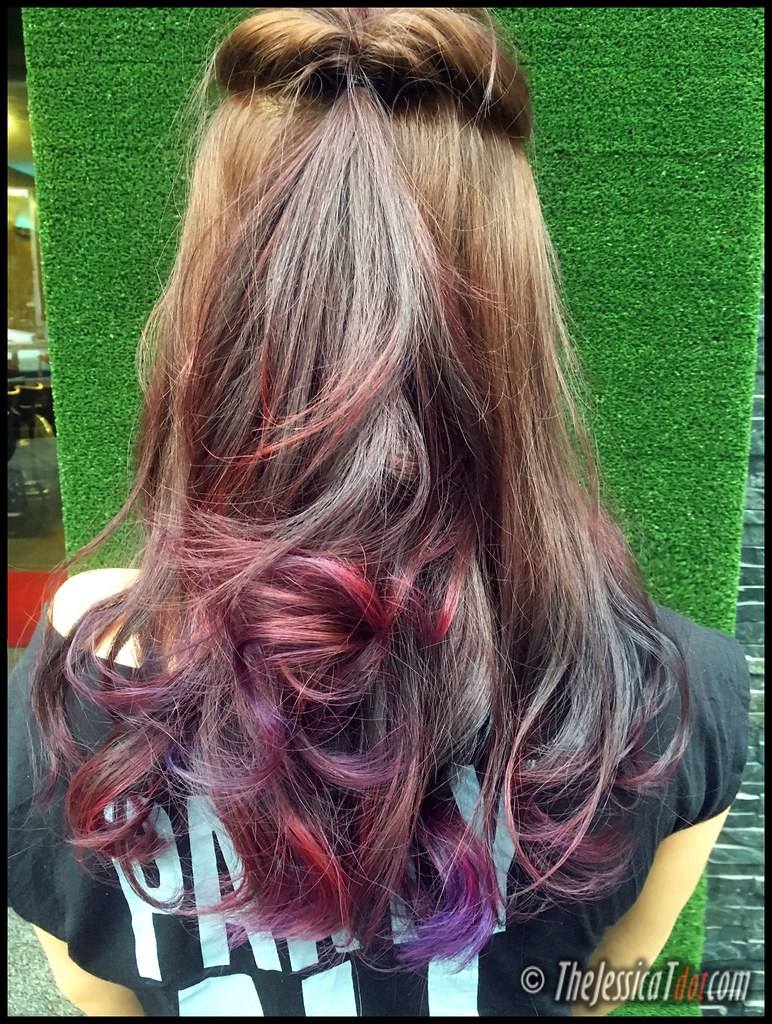 Loved how the chestnut brown turned out and cascading into purple. 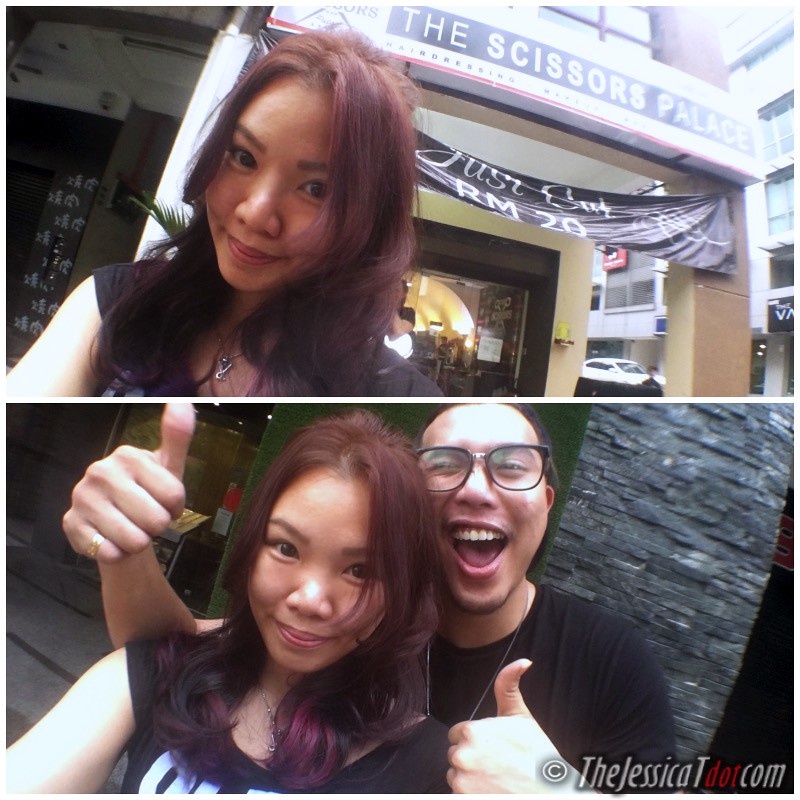 Thank you for bringing life to my hair again, Davis!

Davis’ professionalism & pleasant nature makes him such a joy to be around. No wonder the celebrities who turn to him for their hairdo, keep coming back!

Also, i’ve made a short video on the highlights of my session at The Scissors Palace.

You know what’s cool about this video? The fact that all the footages were filmed by chance as I had accidentally left my Live Photos turned on in my iPhone. Little did I know that I would end up with so many footages to make a little video compilation! Enjoy 🙂

And that’s a wrap! Thank you for making my hair look beautiful. So glad I dropped by the afternoon before the MARKies Awards 2016. It was indeed of perfect timing. 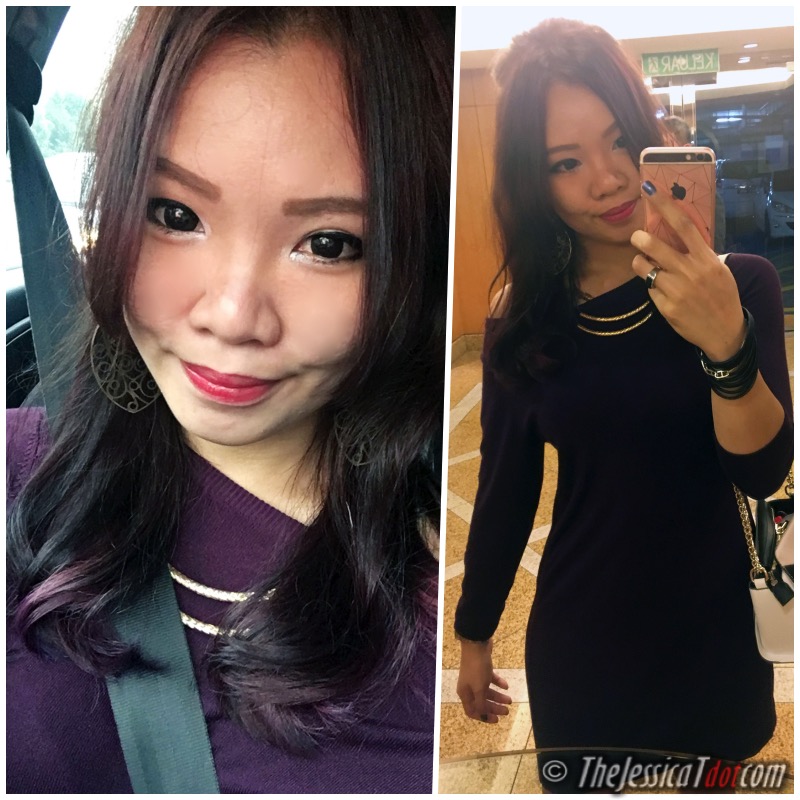 Oh and, Davis has just launched a new branch in Kepong too. Visit him there! 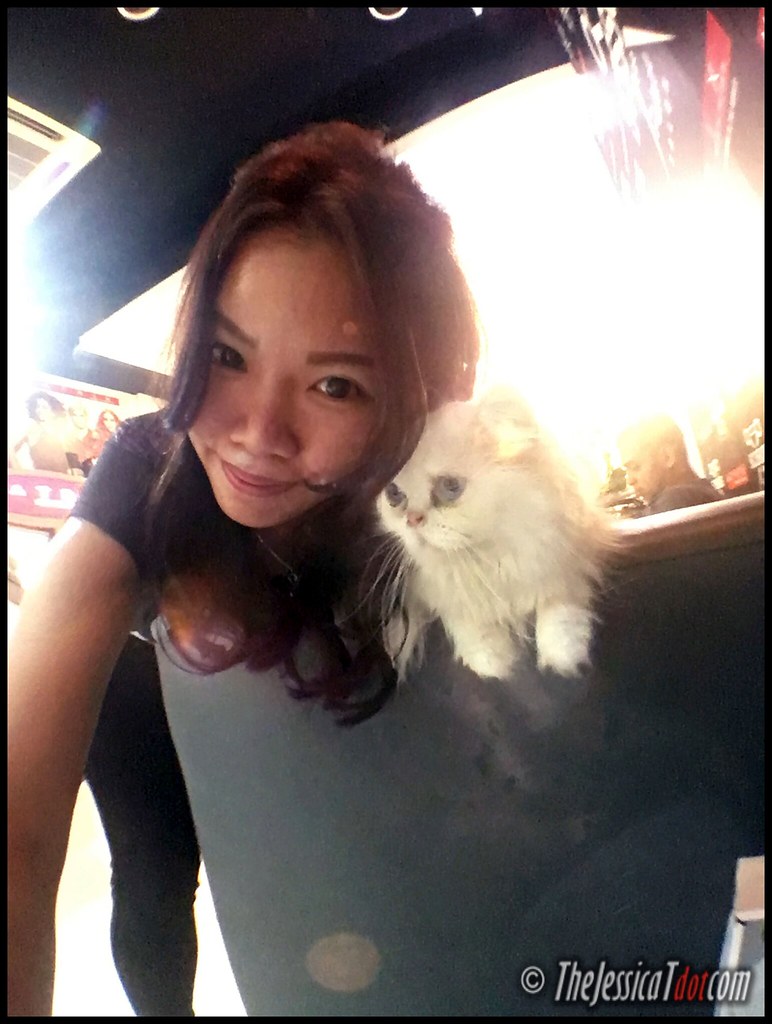 Oh and last but not least, don’t forget to say hi to Princess the cat for me if you’re in Hartamas! 😛

For more info about The Scissors Palace:

Facebook page: www.facebook.com/scissorspalacehairsalon (You can PM the page for appointments!)