Sydney VLOG + Lunch at THE over-popularly famous Pancakes on the Rocks!

I have loads of love for pancakes. Do you?

Back home in Malaysia, I used to go to Paddington's House of Pancakes every so often that the waiters automatically acknowledge me with each visit. I was hoping to eat pancakes whilst in Aussie but there aren't any close by.

So when I first came to Sydney, I've asked on Twitter where would anyone recommend me awesome places for food?

The answer was unanimous – Pancakes on the Rocks. 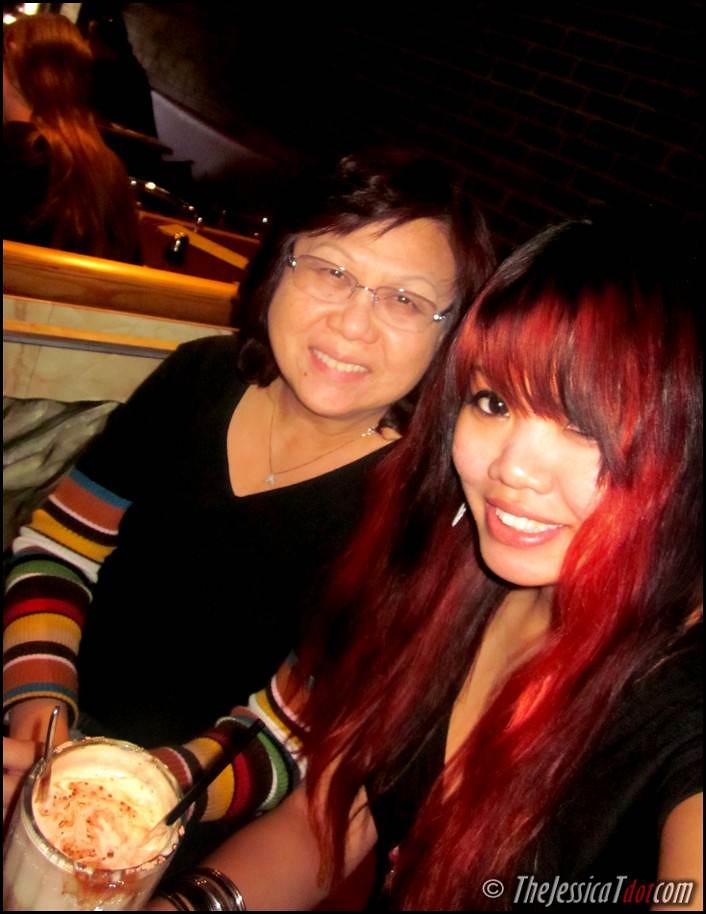 Thanks guys, for the recommendation!

Had some Iced Coffee with Ice Cream on top while we waited for our orders.

Seriously, when I said OVER-POPULARLY FAMOUS Pancakes on the Rocks, I meant it literally. 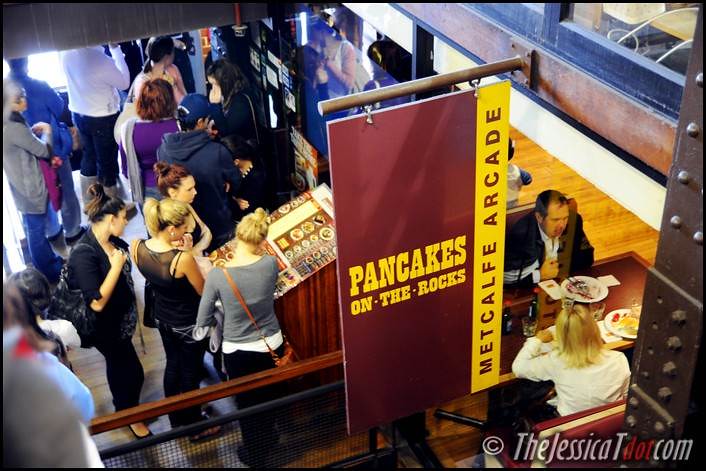 It was over-populated LOL

We had to queue all the way up the staircase and the line behind us kept growing! 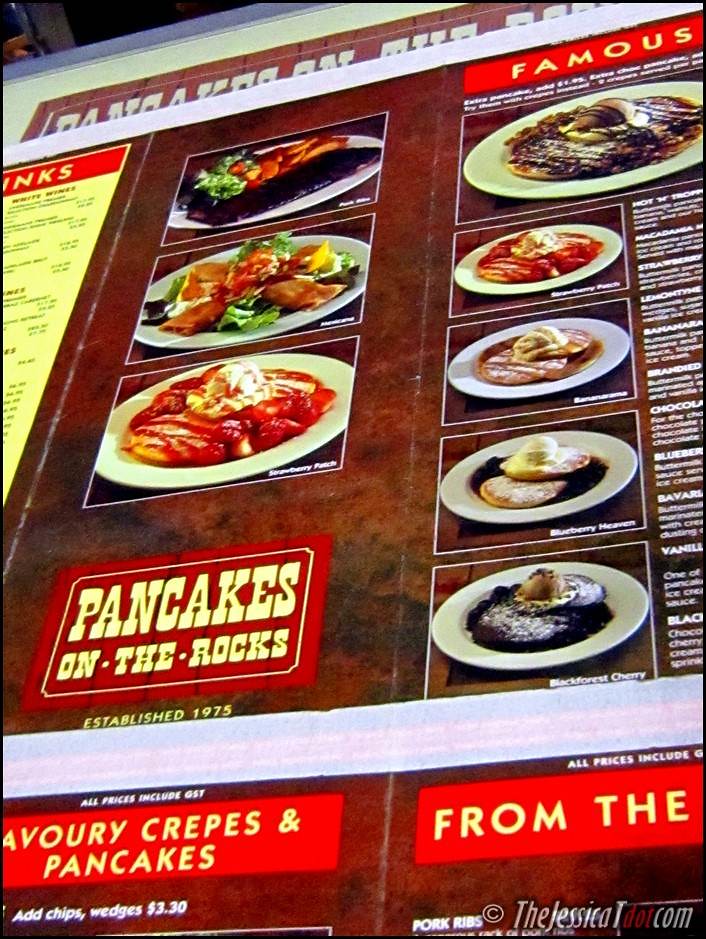 Thankfully we were allowed to order while waiting – saves heaps of time!

As we came in a group of 4, we decided to share some dishes and have some of our own.

The first dish we ordered was …. 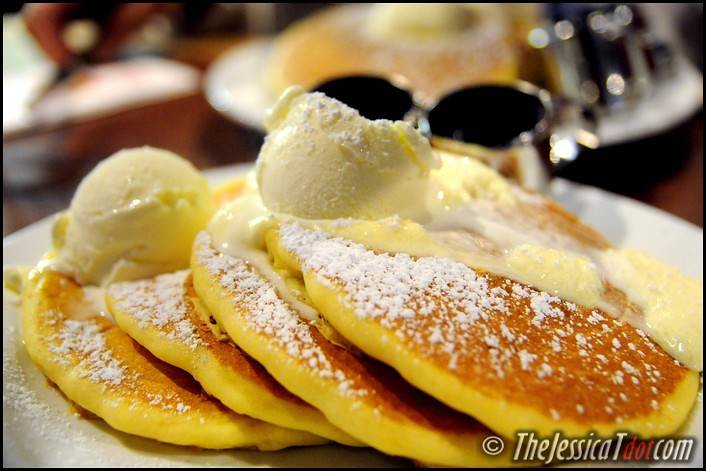 Served with maple syrup and ice-cream 😀 😀

We reckoned it wouldn't be enough, since it was too yummy!

So we ordered another stack – 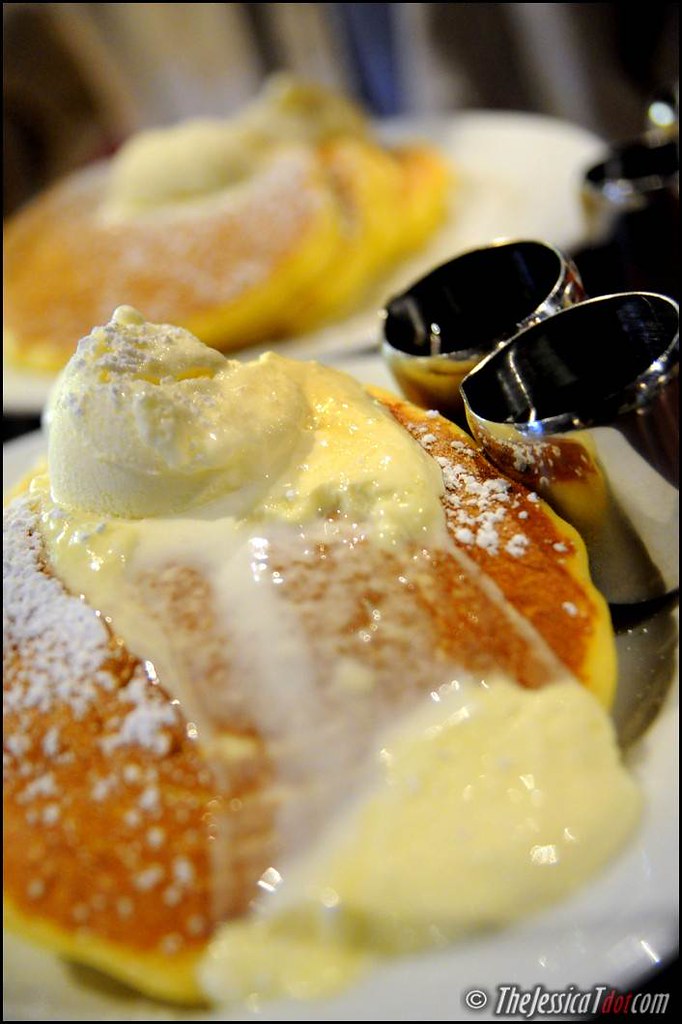 I know some people may not get what the big deal is on pancakes, as it's only made of flour, milk, eggs and other stuff.

But no, I've attempted making pancakes a few times and although it was edible, it took me a while to actually get ALL the ingredients in the right ratio to achieve that fluffy, soft & melt-in-your-mouth pancakes!

Really, it's no easy feat.

Here's what we ordered next – 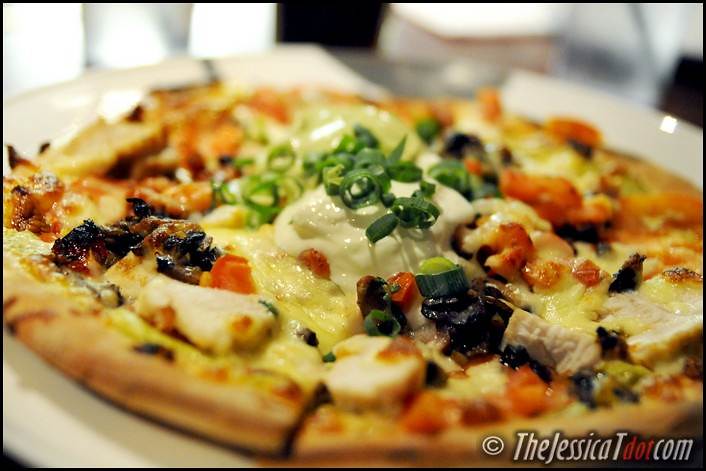 Couzzie Ken and I shared it, but it proved too much for the both of us so Uncle Shen and Auntie Julie ended up having some too.

I haven't seen this before, Pancake Pizza? Now, that's something new to me. 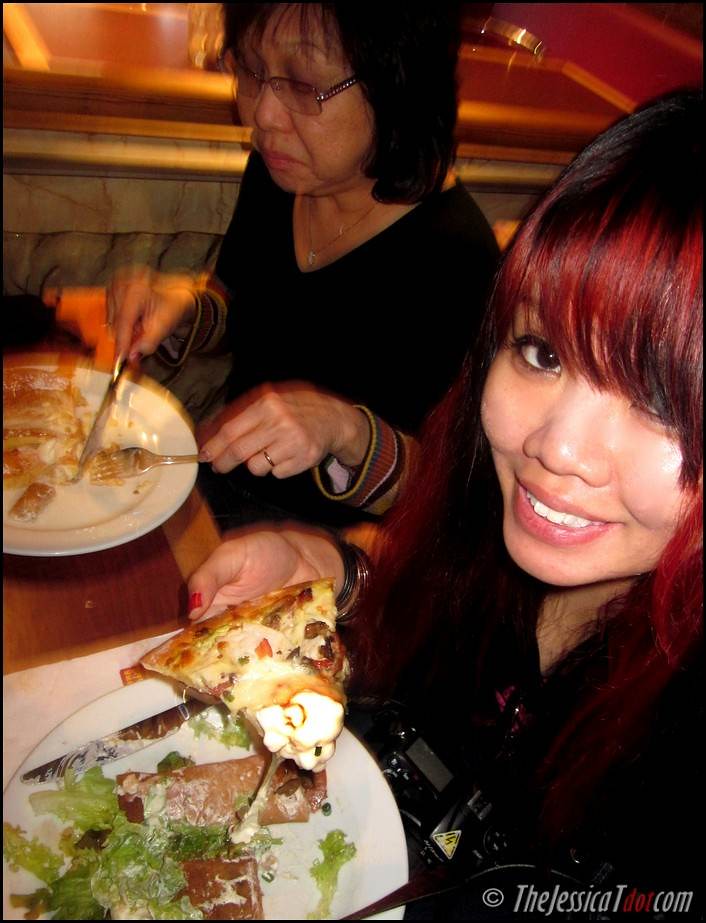 It had a nutty twist to the regular pancake stacks… delish 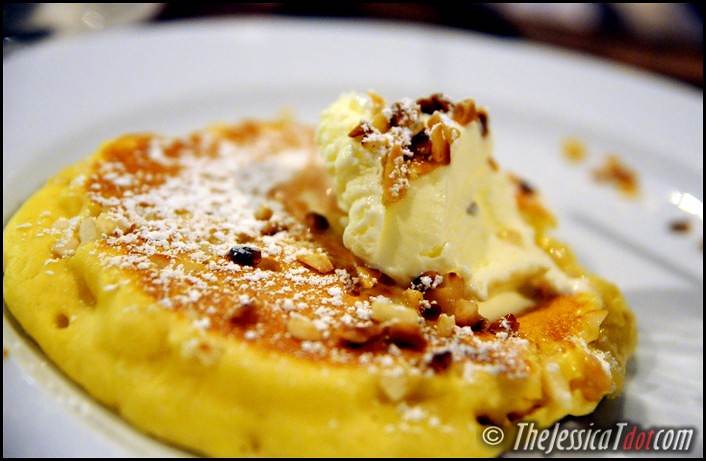 Check out that nutty pancake! 😀

(A quarter eaten, I stopped her midway LOL)

The vanilla ice-cream complemented this combo well. Thumbs up!

Okay, my turn. Here's what I ordered, one of their famous savory pancakes – 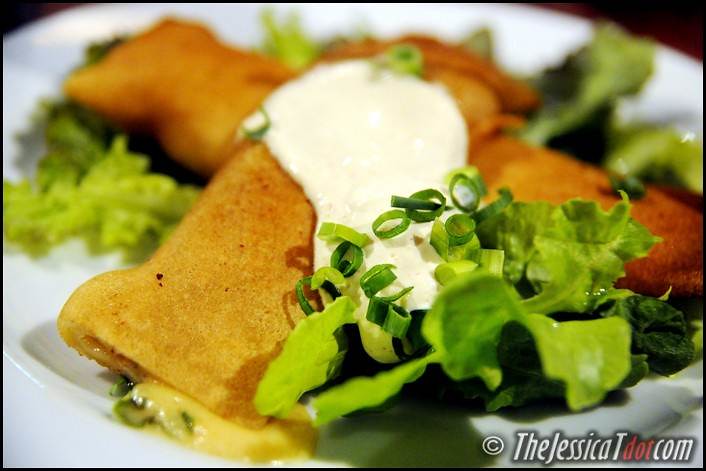 Chicken with smoked ham and cheese, served on a bed of lettuce and topped with chili sour cream & shallots 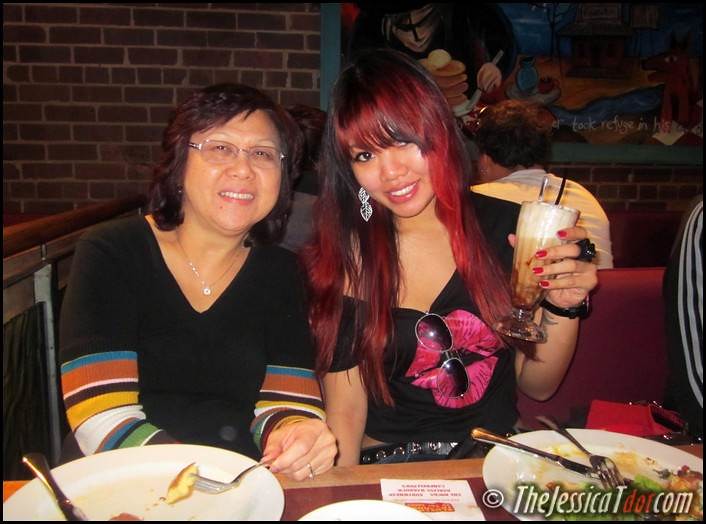 It was soooo delicious I wanted to have another helping but was already full to the brim!

Can't take it any more even if I wanted to 🙁

Here's a short VLOG I made whilst in Sydney, enjoy watching the entire 1 minute of it –

If you missed it, here's the blog-episode on my visit to Sydney Opera House & Harbour Bridge!

So with our stuffed bellies and satiated appetites, we headed back to the car after a short stroll around The Rocks.

Here's a very amused me by the typical Western-looking red postbox! 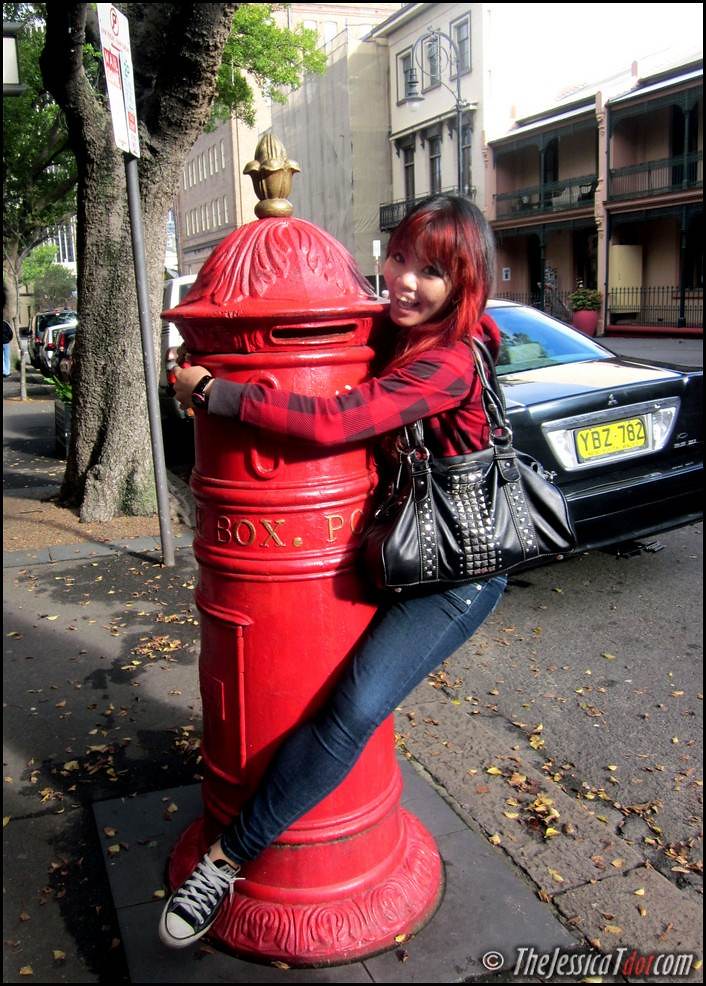 Why don't we ever have one of these in Malaysia?

Just like Australia, we were colonized by the British too, so… where's our iconic red postbox? 🙁 🙁 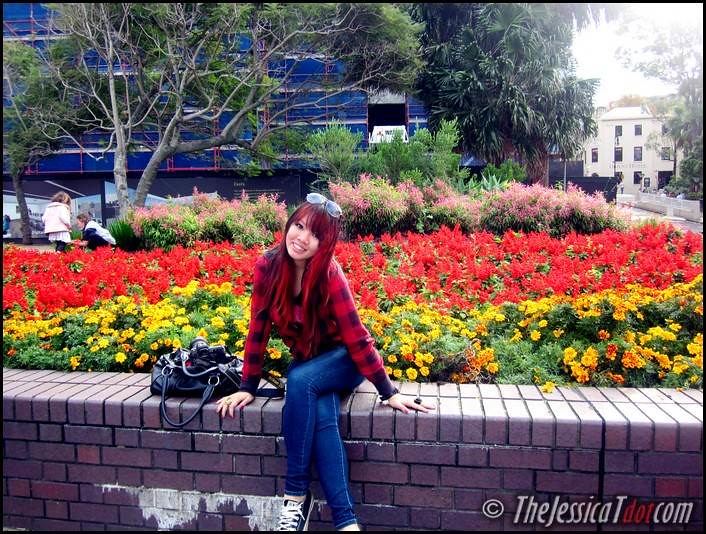 Taking a good rest after a good meal

I love the flowerbed behind me! 🙂 🙂

Kingsley's Steakhouse, Darling Harbour & Sydney's popular Star City casino (where I won triple my cash!) $$$ Now, who wants to take me for a spin on their next trip to the casino?