Take it to the streets yo! PUMA Evolution of Suede finale party FOR THE STREET! | Capsquare KL

Upon getting back on my feet after discharging from the hospital, I received an invitation to party VIP style at the finale of PUMA's Evolution of Suede.

This got me all excited as I am a ardous fan of sneakers/kicks and love all things urban & street cultured! 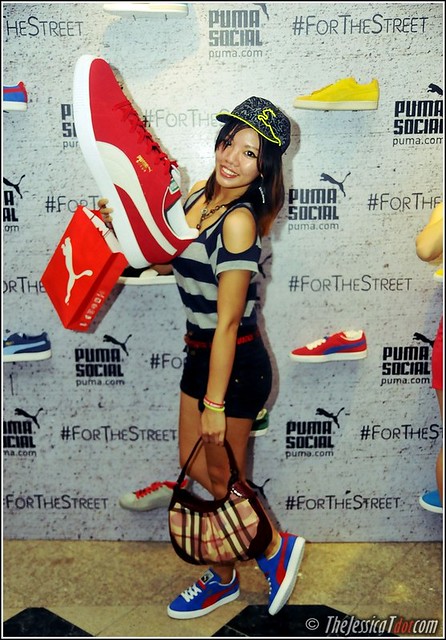 I arrived Capsquare KL on time and it wasn't difficult to spot the event venue at all!

It was brightly-lit, cheery and jostling about with media and guests. The loud, booming music certainly helped too. 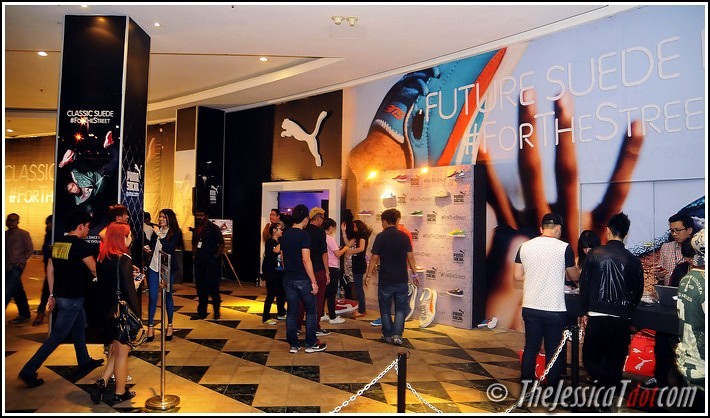 Apr 5, 2013 | Us being silly & bopping to MC Hammer's 'Can't Touch This' at the PUMA Evolution of Suede party. Hip hop yo! by imthejessicat on Keek.com

I recognized them instantaneously and knew all the lyrics by heart YO.

Ya'll know what this is, this yo' girl Jessicat. 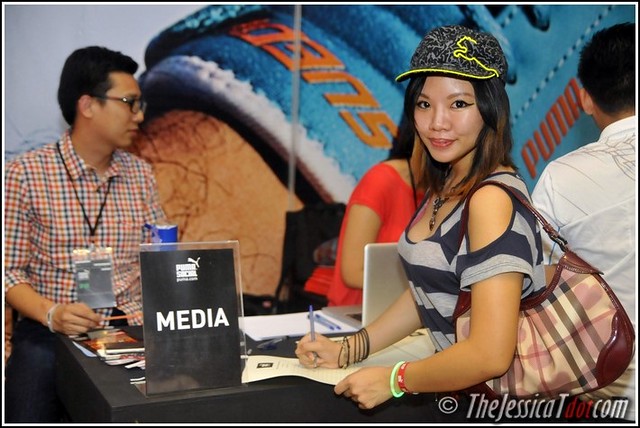 But first, formalities. Signing on the guestlist! 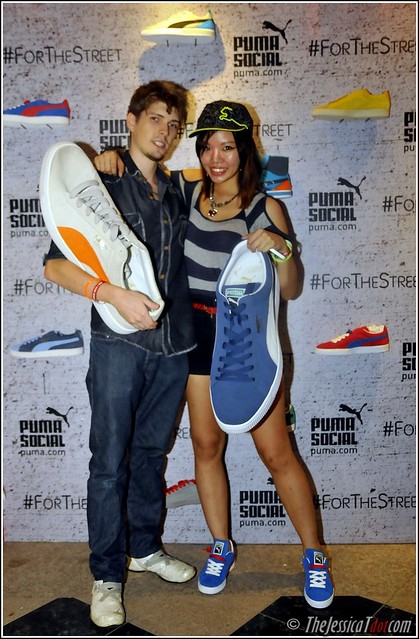 And of course, an obligatory photo with the boyfie at the photowall 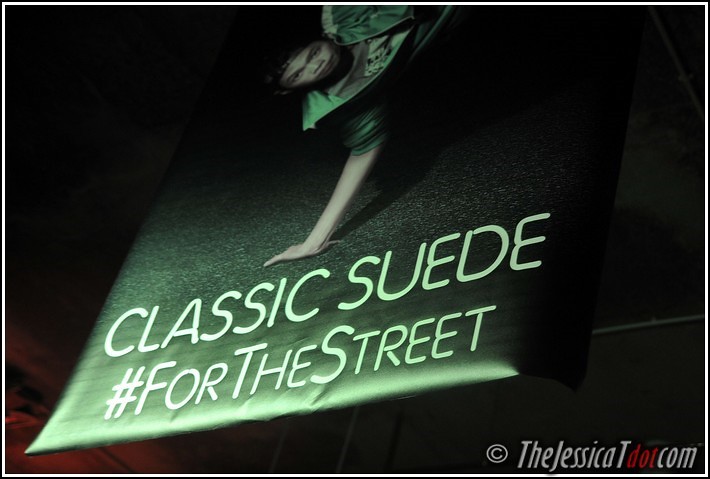 This For the Street party celebrates PUMA Suede’s 45th year in the game change and marks the release of the Future Suede. 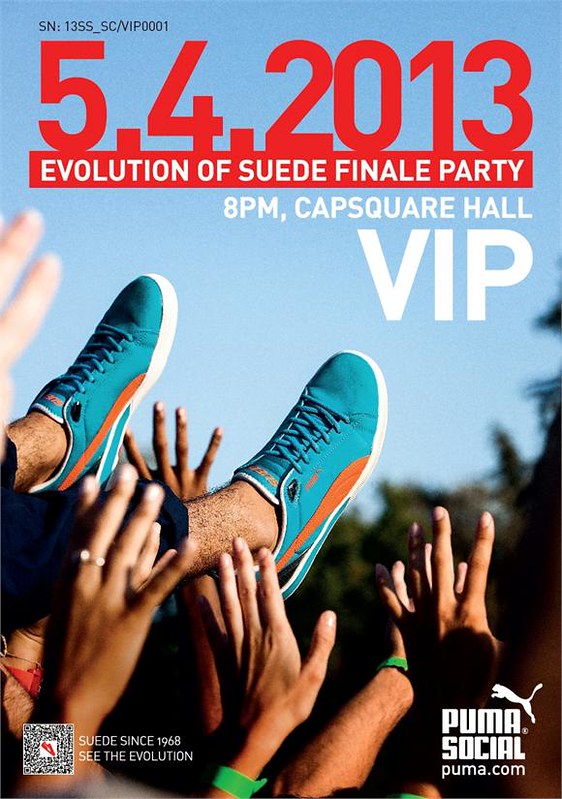 Part of the invitation I received

Street culture was my thing as a boisterous teen, back in the day. 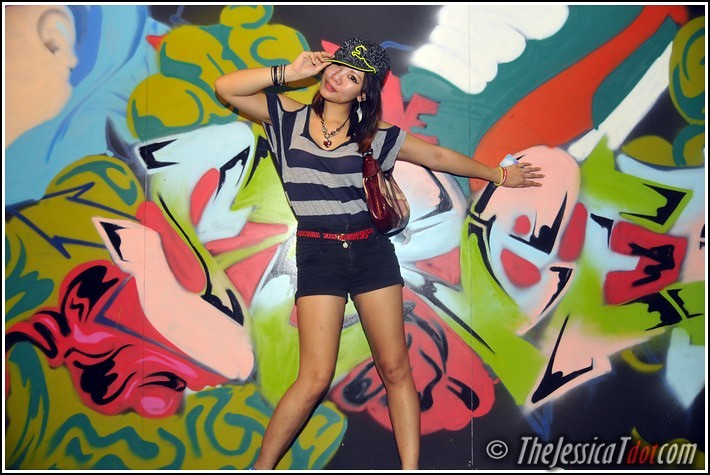 I particularly felt the inner street rebel of my past clamouring for attention.

Come to think of it, I should have came dressed in my baggy pants, tank top, NYC snapback cap, bling metal chains and walk like a thug.

Haha! That would be a sight to see. Imma be so gangsta, there wont be no recognizing this homie, ya'll. 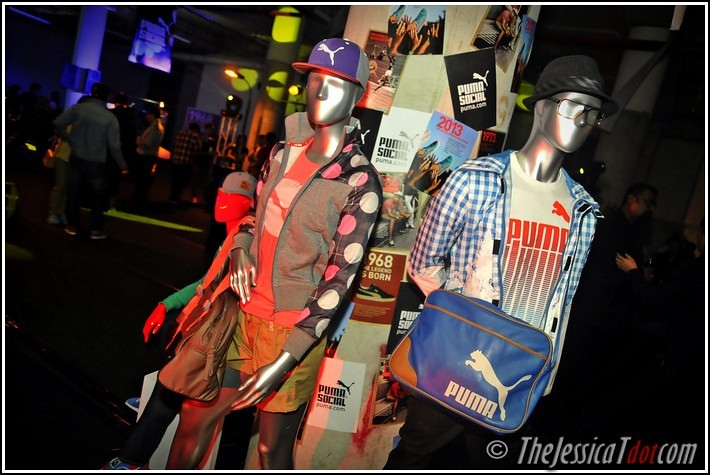 Some PUMA apparel showcased by mannequins at the entrance 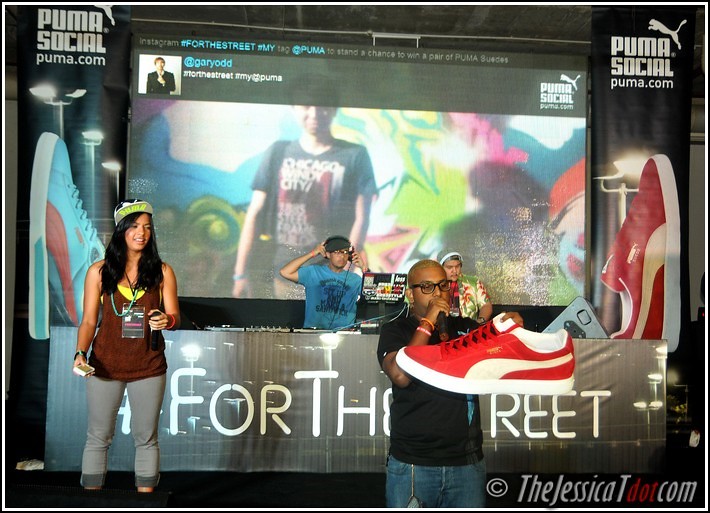 Mr. Dan and Shikara, two prominent personalities in the Malaysian hip-hop scene were the hosts for the evening.

A live graffiti performance by graffiti artist, Newba and live shoe designing booth were manned by graffiti artists, Bee of PHBKLK, Iqbal of Fresh Kids, Carpet, Katun, and Nenok. I watched them attentively as they worked their magic fingers with their tools of trade, marker pens, sprays and colours.

I almost wanted those artists to graffitize my sneakers! Should have brought my plain white ones for them to go crazy with. 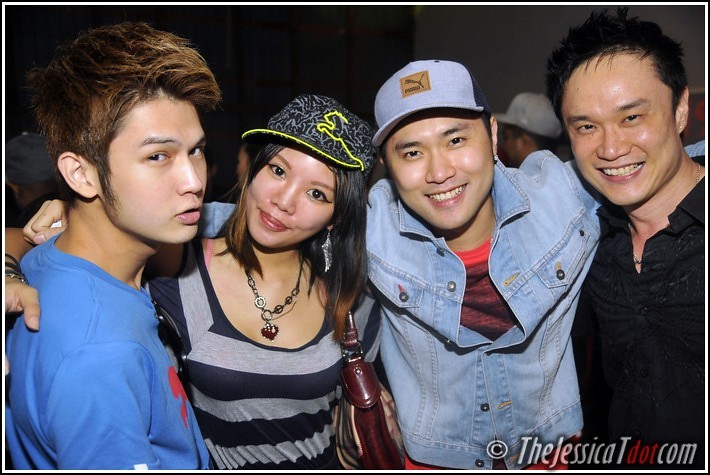 Had a few bites and drinks in the VIP zone with some friends Koujee, Dennis and Yu Jin

Koujee will be performing in a short while, just you wait! 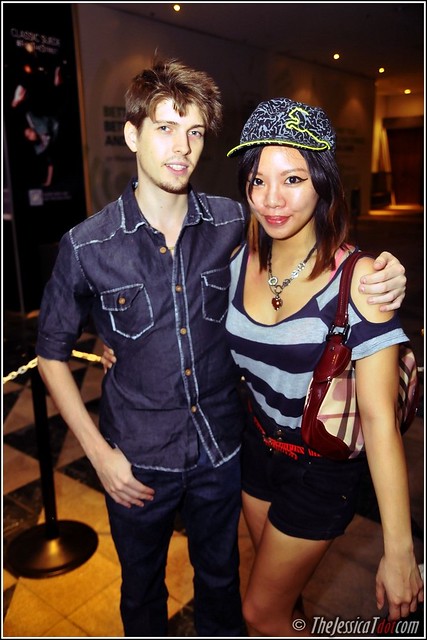 Boyfie and I by the giant PUMA Evolution of Suede banners

The night kicked off with a performance by the winners of Showdown 2011, Elecoldxhot.

I've watched them plenty of times before and I'll never get tired of them. 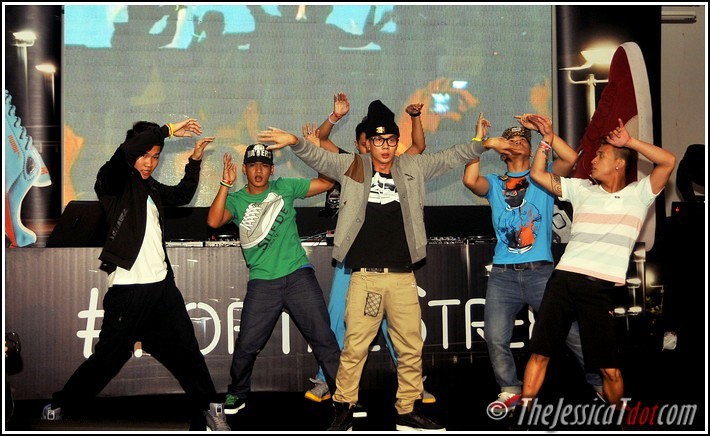 Their street dance tonight, and as always, was brimming with energy and their routine was well in-line

with the progression of the hip-hop dance scene from the late 90s to its present form. 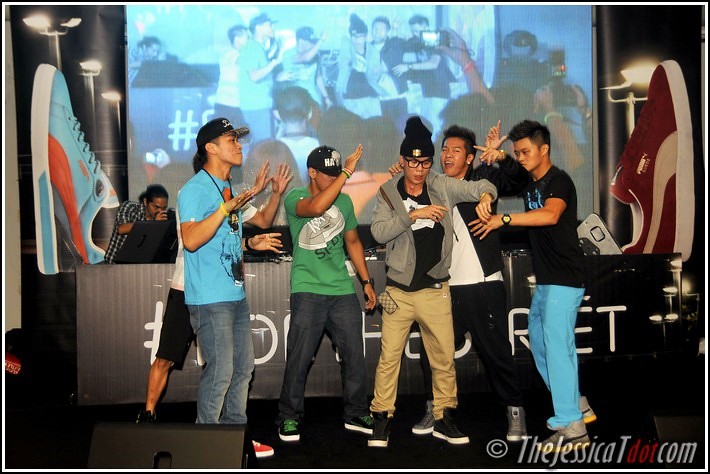 Very apt for the theme of this For the Street event, I must say!

After their performance, the boyfie and I went exploring around the zone to check out a few other epic, life-sized shoe designs. 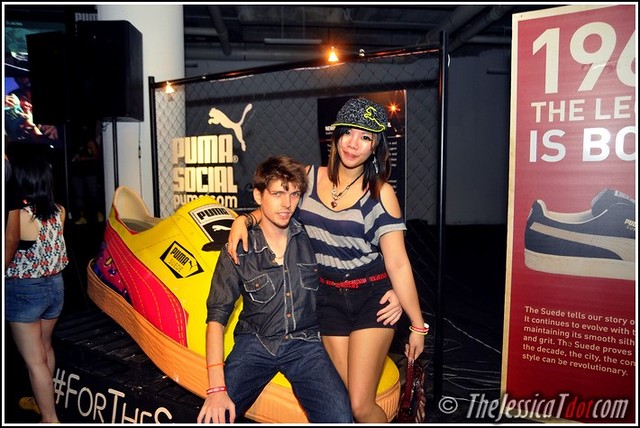 Us with this giant yellow schoolbus of a PUMA shoe design 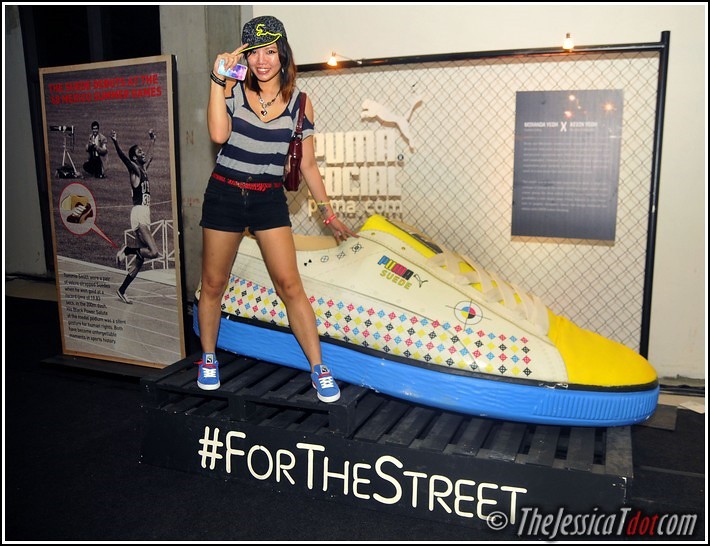 Proud to say this one was done by my friends Miranda and Kevin (my former colleagues in the print media industry).

Nice one. I recognized it instantly! See the CMYK motif and other print symbols?

There was also an exhibition of the top 30 designs selected from the 160 entries received for the 2058 Future Suede design contest.

Behold, the various masterpieces of 30 artistic people's vision of the 2058 Future Suede!

Here are some of them: 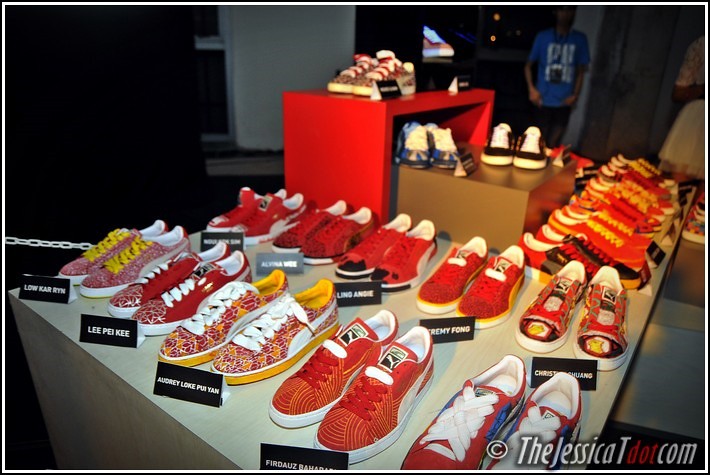 The sea of red sneakers! 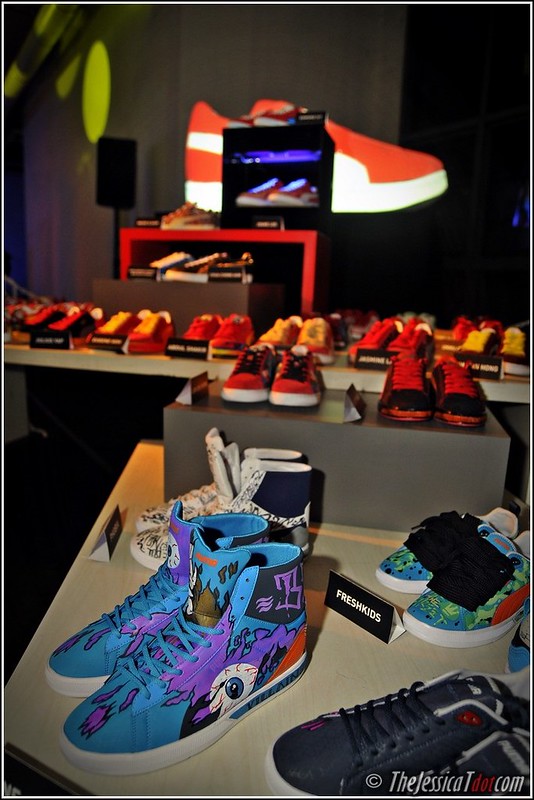 Check out this eclectic blue high-tops with the eyeball!

Soon after, we were entertained by a beatbox performance by Koujee. 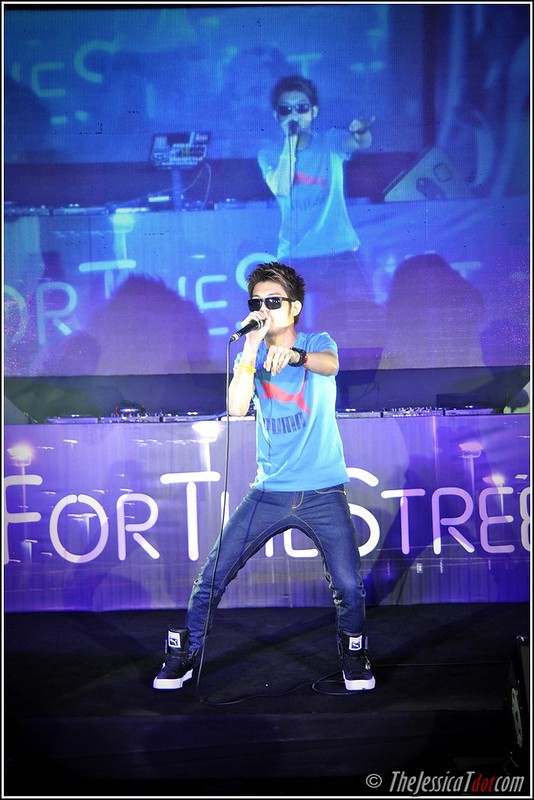 He interacted with the dance floor superbly and dropped epic sounds from his voicebox! 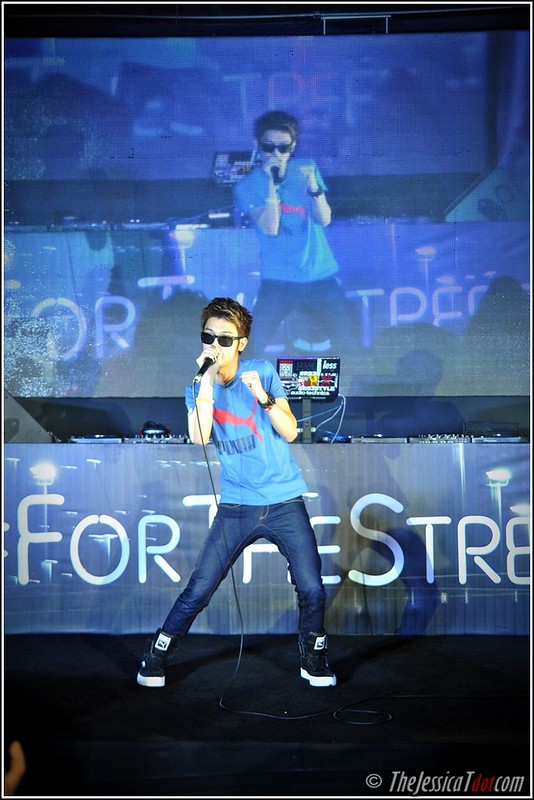 Koujee's beatboxing was smashing! It got me booty-shakin' to the beat and vocal bass.

It's been a long time since I've partied to RnB tunes. 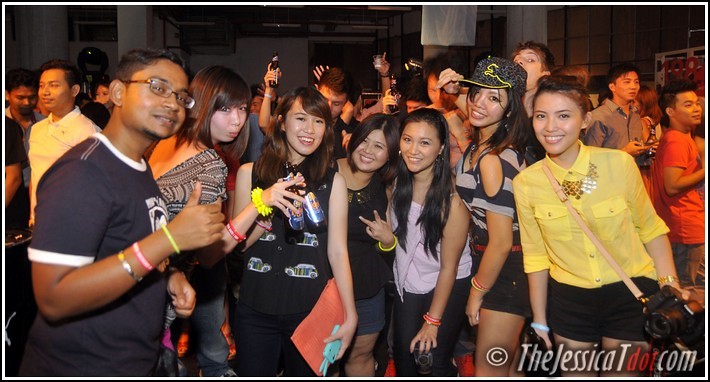 Wih some friends at the dance floor! 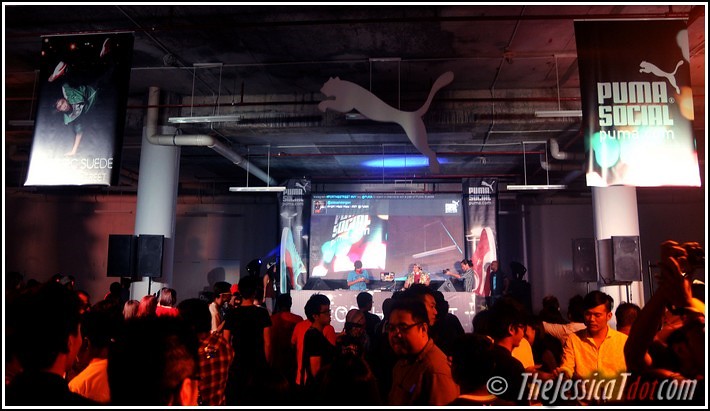 Next up, was a DJ battle performance between DJ Fuzz and H3

Oh, which reminds me, I would like to thank PUMA Malaysia for sponsoring me the gorgeous predecessor of the Future Suede last month – the Classic Suede. 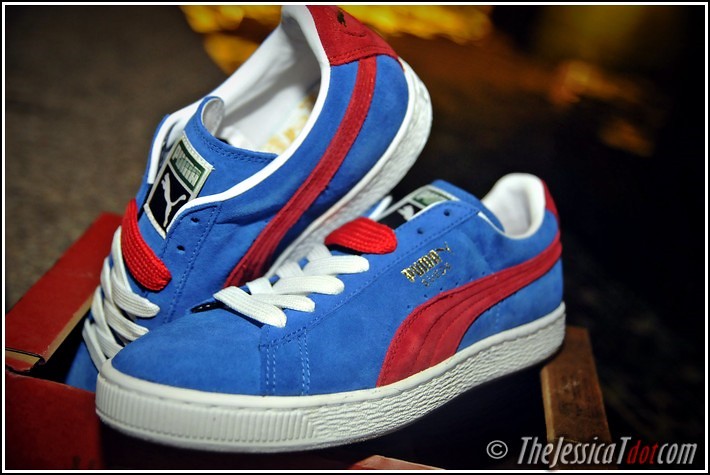 It came in many variants, but this was the colour combo of my choice!

This suede beauty is made from the underside of lambskin. Loved the contrasting colours. 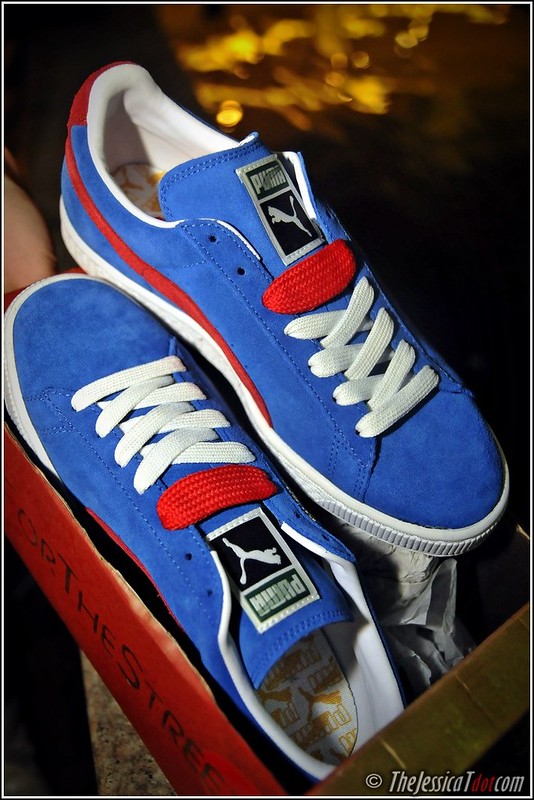 Here's a close-up of my new Classic Suede.

So close that you can even see the fine, suede material!

Apr 5, 2013 | At the Puma party! Too loud inside to Keek btw. Also, thanks Puma Malaysia for sponsoring my new suede shoes! ❤ by imthejessicat on Keek.com 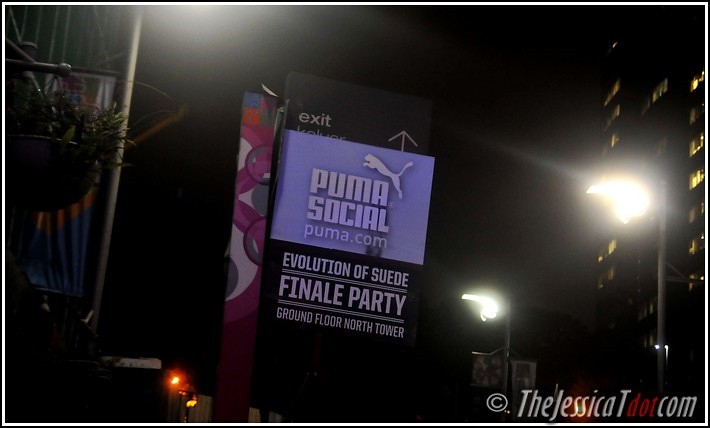 While tonight's finale event signals the end of the PUMA Evolution of Suede campaign, I know the legacy of PUMA's classic heritage and future evolutions will never be a thing of the past.

PUMA's Evolution of Suede will live on, just like the culture of hip hop and streetwear, so long as the legacy is still loved by many suede fashionistas around the world. 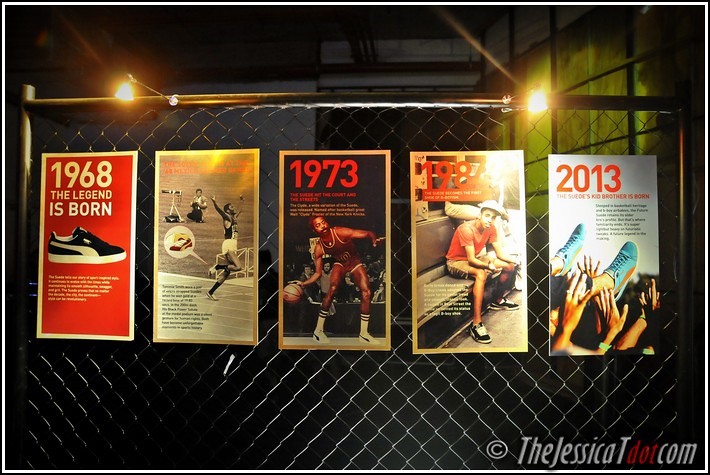 Now, this is what I call a priceless heritage

For more on the ‘Evolution of the Suede’, visit: www.madeforthestreet.com.

futuristic tweaks but retains the signature Classic Suede of 1968. 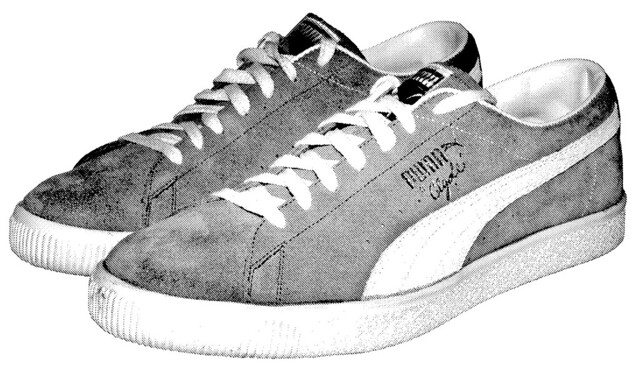 Here's one of the other variations of PUMA Suede. The PUMA Clyde made in the 1970s.

Ugly? Puh-leese. It's cooler than you think, YO.

This was the IN-THING back in the 70's YO. Even your grandfather might have worn it while breakdancing 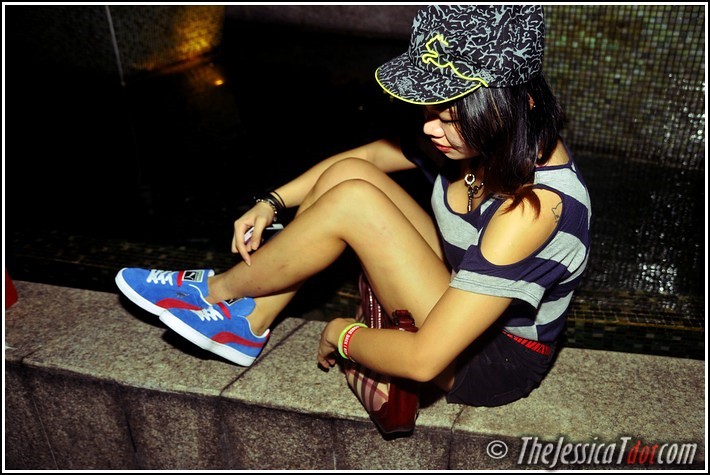 Thanks for a great time and also for the Classic Suede, PUMA Malaysia

Wore them at tonight's party in the spirit of the new Future Suede!

Go get the brand new Future Suede, people! I just might!

I think my Classic Suede could use a lil bro to keep him company amongst my collection of other sneakers.