I saw Mariah Carey fall down onstage during her concert in Singapore – dangerous for pregnancy!

So most of you would know that I attended Mariah Carey's concert when I was down in Singapore for the F1 Grand Prix a month ago. Haven't really found the time to do up this blogpost. But I figured that I should finally get round to it 🙂

Seeing diva Mariah Carey perform live in the flesh and belting her lungs out before me was indeed a great honour. 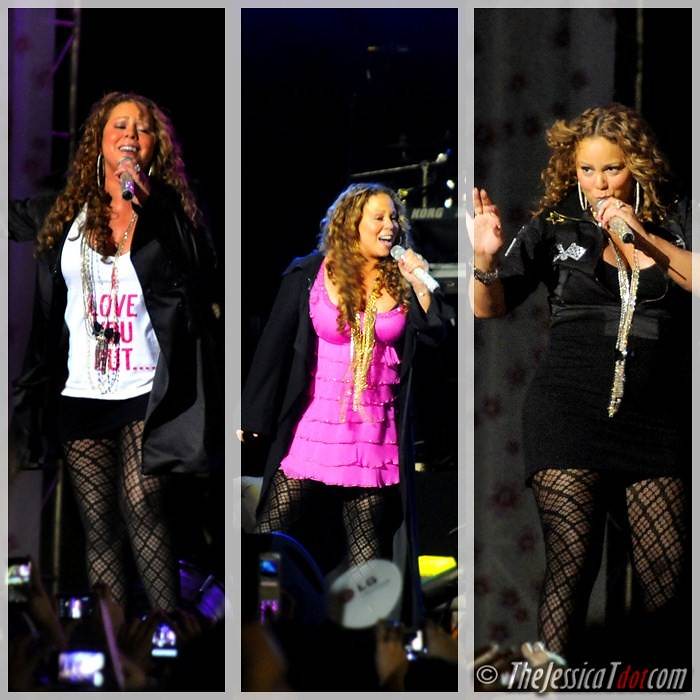 An outfit change of 3-4 times during the performance!

Many thanks to Maxis and Nuffnang for the opportunity. She was exactly what I had envisioned her to be – except probably a tad bigger. Heh.

Though logically, she is bound to look tiny standing on this gigantic stage. 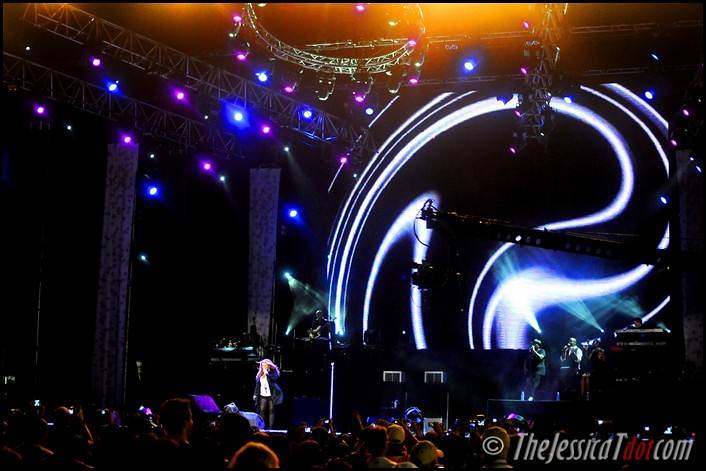 little Mariah amidst thousands of people

When her concert began, there was a sudden burst of digital butterflies all around the backdrop screen. They were fluttering around for quite some time before she finally came onstage to sing the 1st song of tonight. 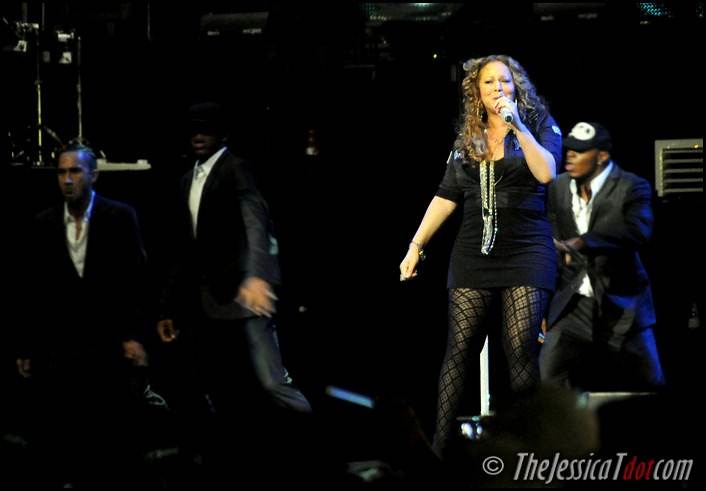 'Obsessed' was the first song of the hour 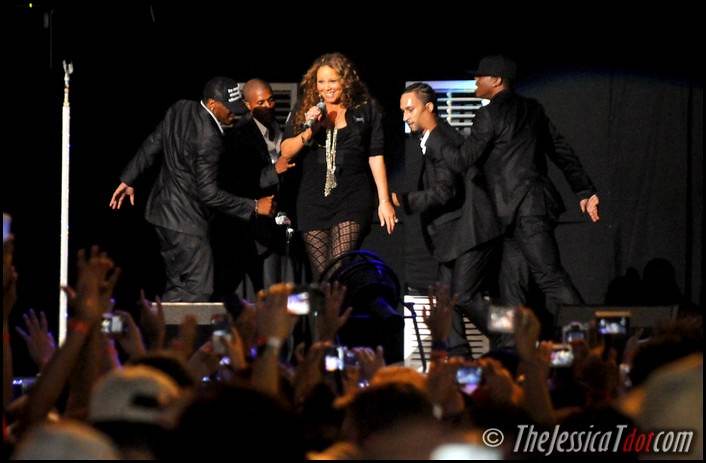 As expected, thousands and thousands of fans were screaming ecstatically upon seeing her

After her song, Mariah complimented the weather in Singapore. LOL very common topic to begin a conversation I must say 😛

She mentioned that it was really "so nice and hot here". 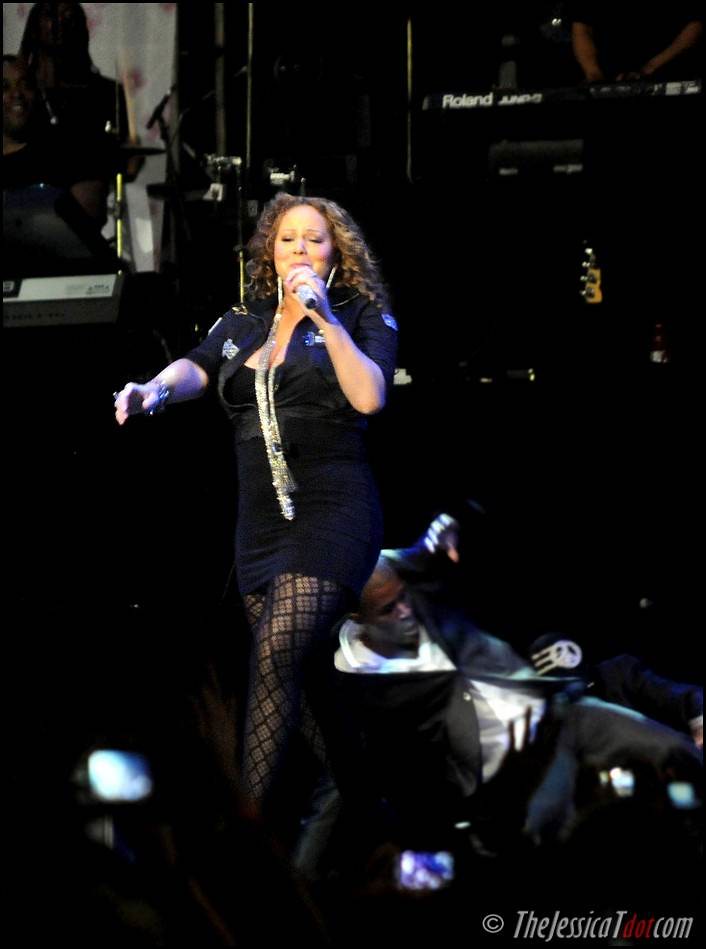 Then she went on dancing and singing the rest of her popular songs from various albums. Even from the really old ones from Glitter of 2001 and Charmbracelet of 2002 to the more current ones like E=MC² of 2008

Shot a video of her performing 'It's Like That'

I wasn't really familiar with all her songs as I ain't a huge fan, but after looking through the net, I spotted some familiar songs from those albums. 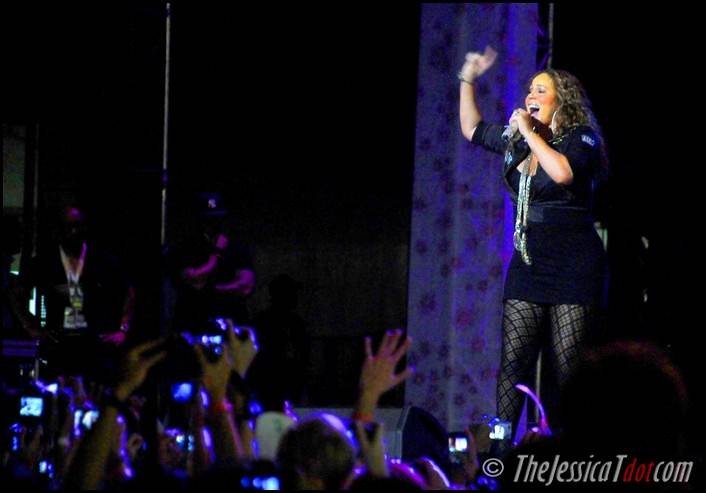 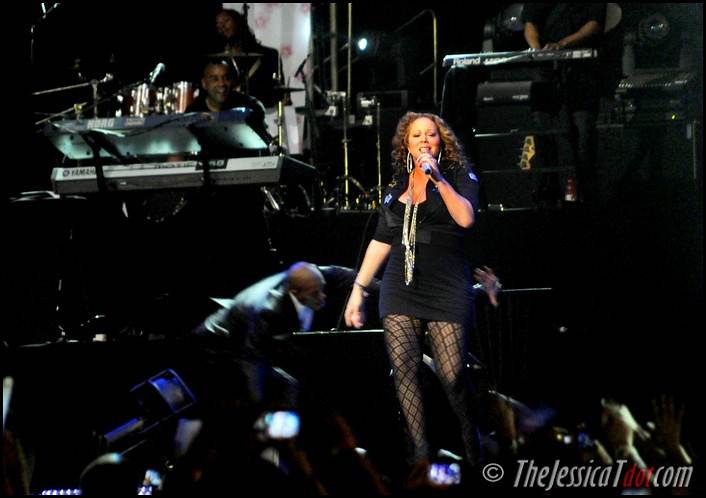 So much so that some friends even texted me asking "is that Mariah's voice I hear?"

When they were snug in the hotel room away from the concert arena! 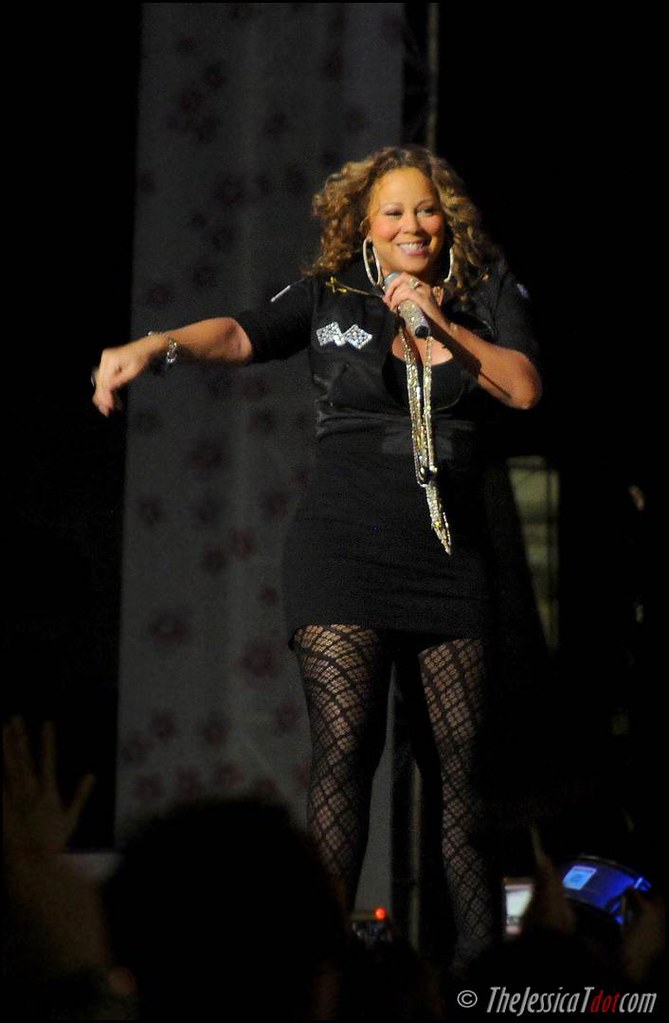 She was fabulous, singing it live!

Mariah Carey was every bit of a diva the media portrayed her to be.

She had diva moments aplenty and requested publicly for water onstage as well as a stand fan to be blown towards her direction. She also complained of tiredness and thirst! 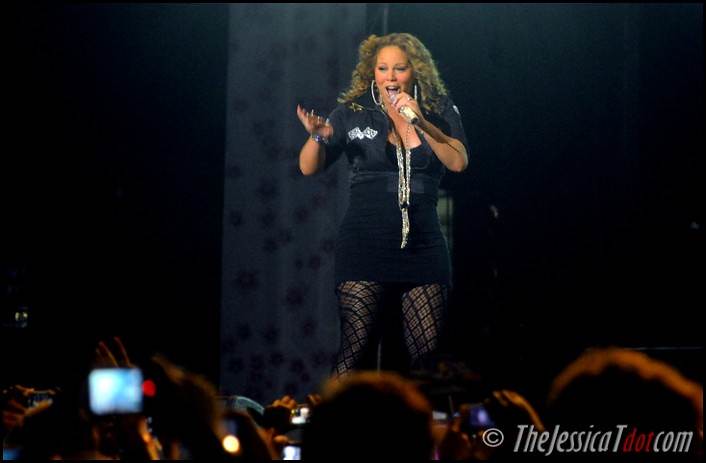 Not too nice anymore huh? 😀 Asian weather. Too humid, no? 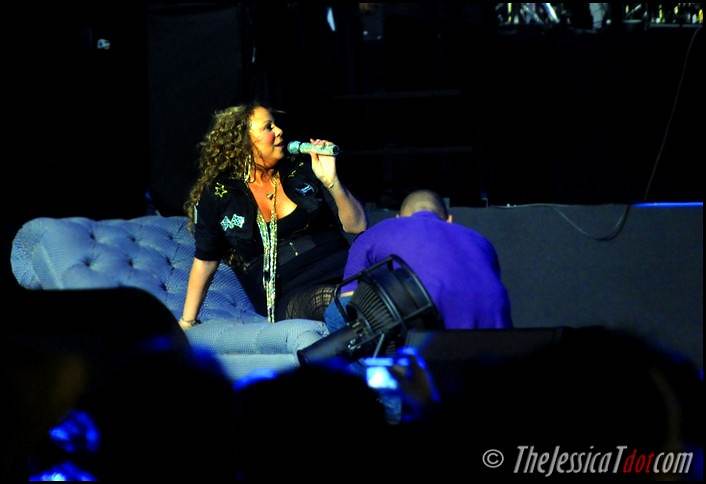 After complaining about her fatigue and how her feet hurt due to her new pair of heels,

the crew brought in a sofa for her.

How much more diva-ish can any diva possibly get on stage? O__o

While resting on the sofa, she chit-chatted with the crowd a little about how she was inspired by her godmother (whom I found out was Patti LaBelle!!!) who was comfy with her fans as well.

She then mentioned a bit about how she wanted to take an example to be just as comfy as she can, with us. 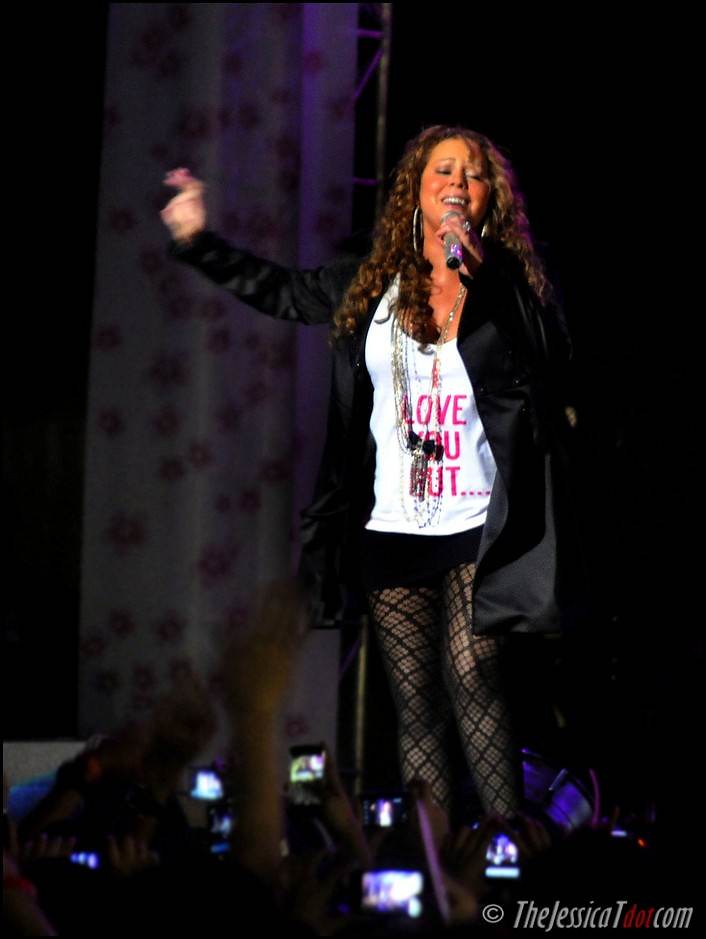 After apologizing to the crowd about her 'diva'ness, She continued performing even more songs as we sang along with her.

Shortly after, Mariah called for the crew to adjust and change her high heels. 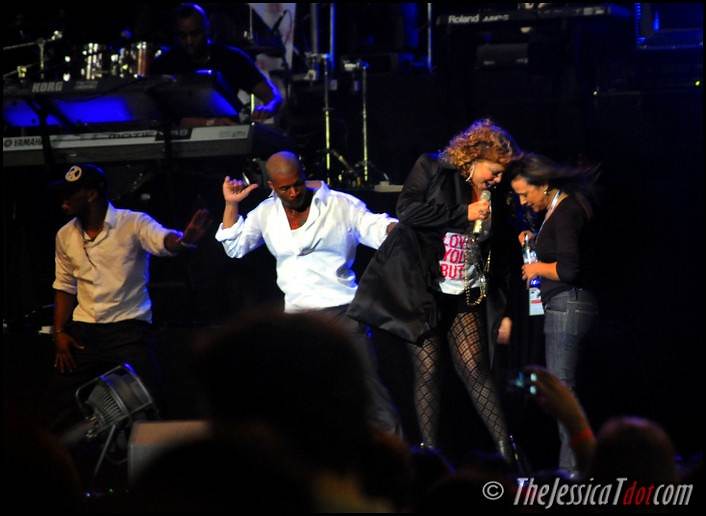 So someone came onstage upon her call… 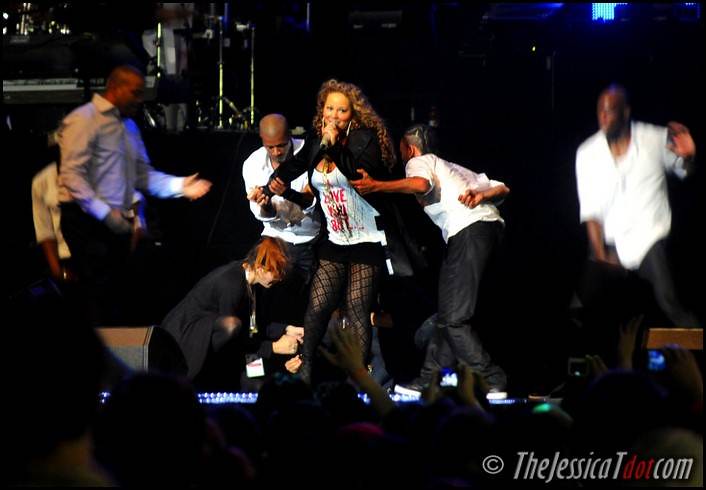 … and started fiddling with her footwear WHILE she was performing & dancing.

However, Mariah still didn't seem to have proper balance even after her shoes were fixed. Seriously, it makes me wonder how many inches of platforms she was prancing around in. 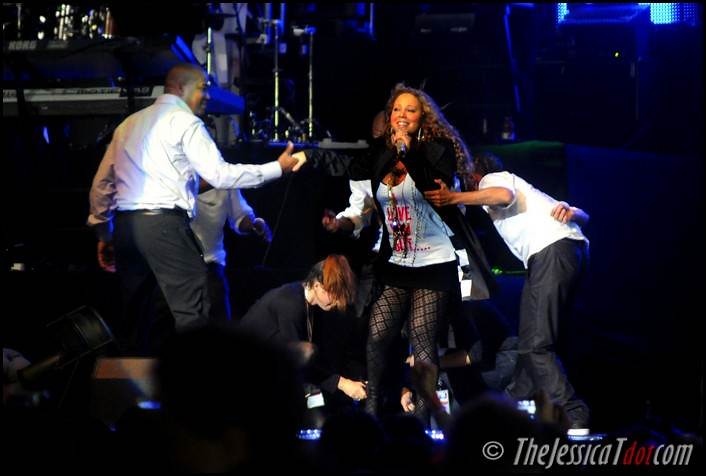 Constantly needed a helping hand with every few movements 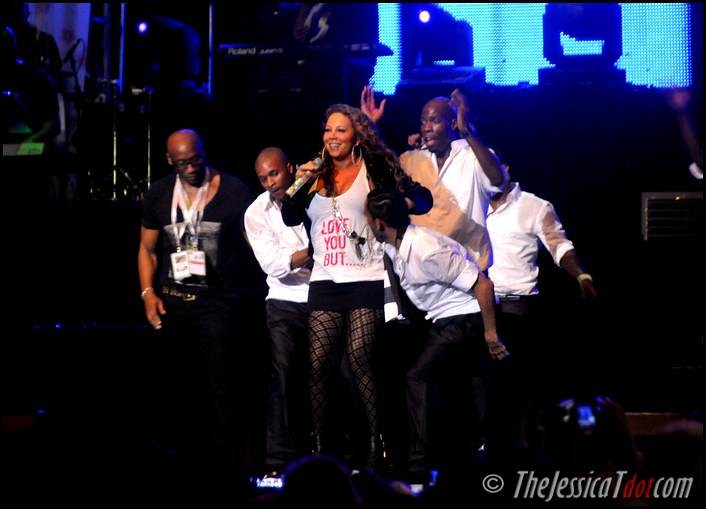 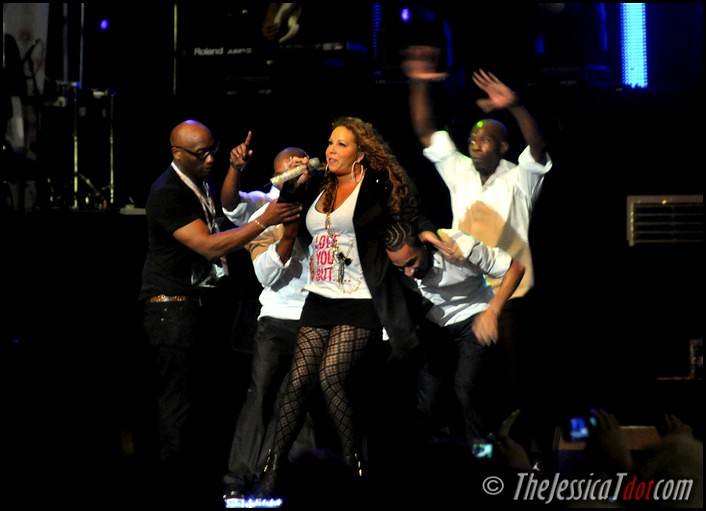 I had the feeling she was going to fall off the stage or onstage.

Either way, it's gonna be nasty 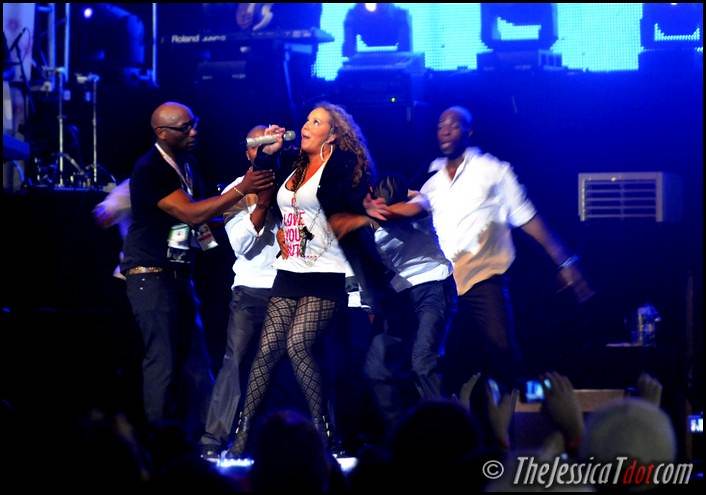 After a few seconds, her facial expression changed. 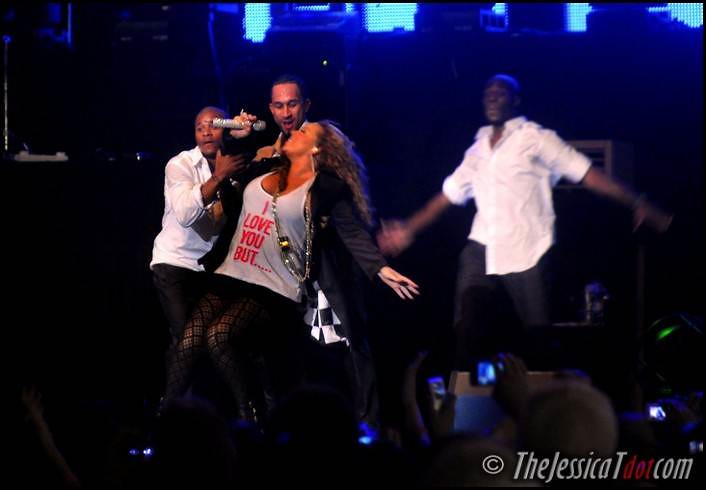 SHE WAS INDEED GOING TO FALL!!!! 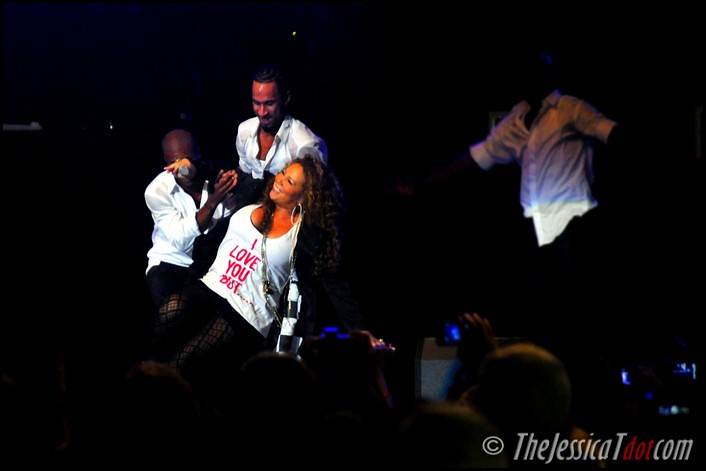 After a few struggles and clutching onto her dancers, Mariah began tumbling down…. 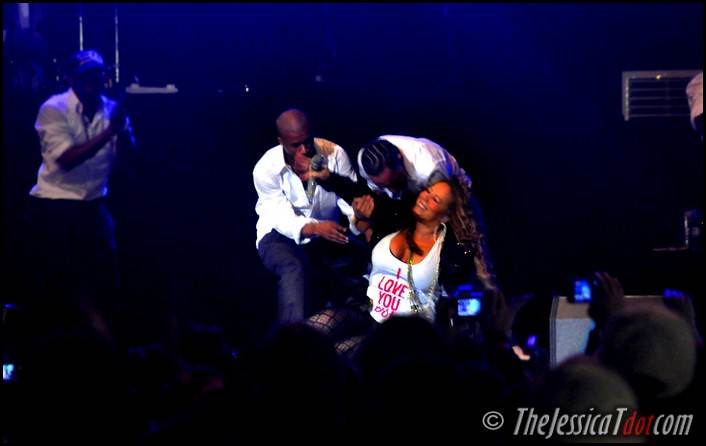 At least she didn't topple over exposing anything nor fell flat on her face.

What a graceful way to fall

Many people came to her aid, especially the back-up dancers and crew members.

But she brushed them aside and said "I'm okay! I'll be fine"

The best part was that she knew how to laugh at herself, instead of being emotional or creating drama of any sort.

"OH MY! YOUTUBE WILL BE ON FIRE AFTER THIS!

ALL OF YOU DESERVE A REFUND WATCHING ME FALL" 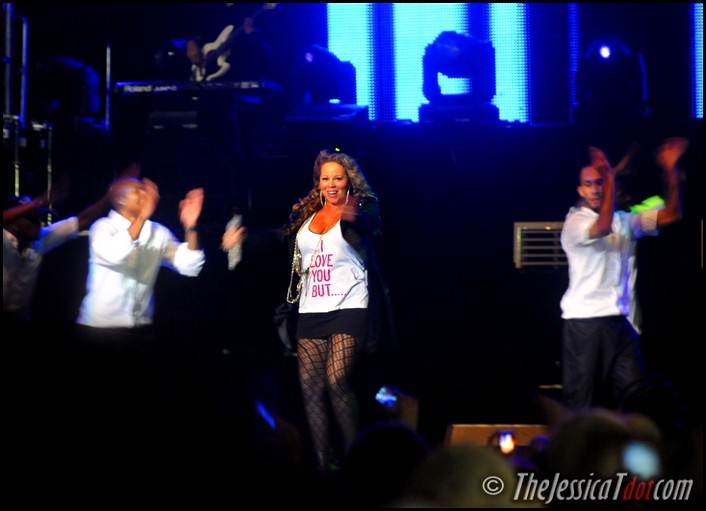 But she got back up with the speed of light!! O__o

Thankfully without ripping her stockings or anything. Bravo!

This gutsy woman then continued braving whatever pain she *might* have felt during the fall and carried on her performance anyway.

Little did we all know that she was actually already pregnant! 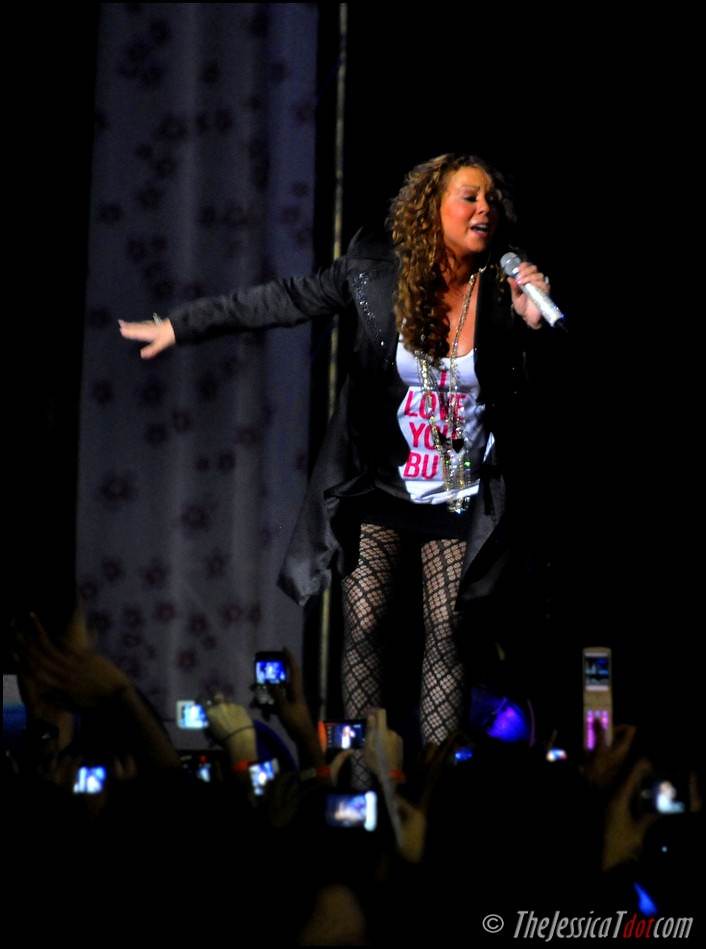 It's really deleterious for a preggers lady to fall down.

Much less strutting all over stage with her killer high heels! 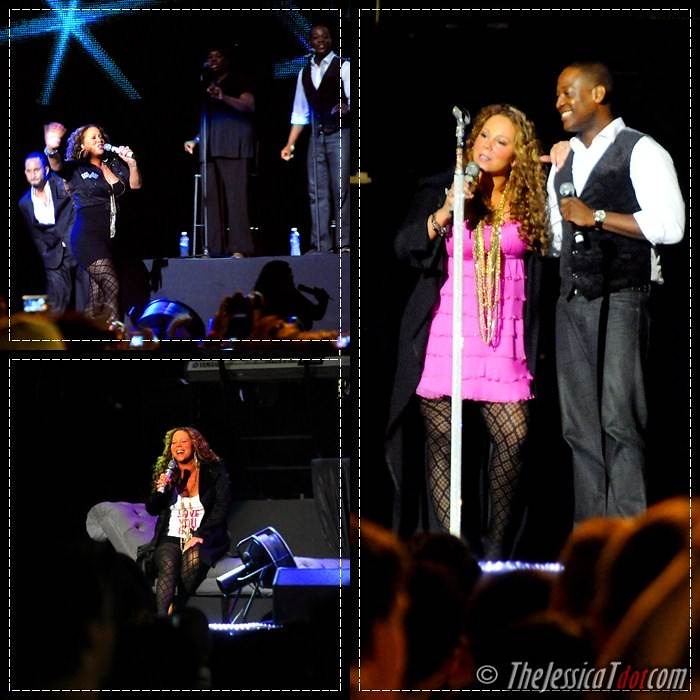 Later that night, she shared the stage with her good friend.

Another outfit change. So typical of Mariah Carey 😀

Ya know those kinds of diva/big shots who will always have outfit changes during performances?! 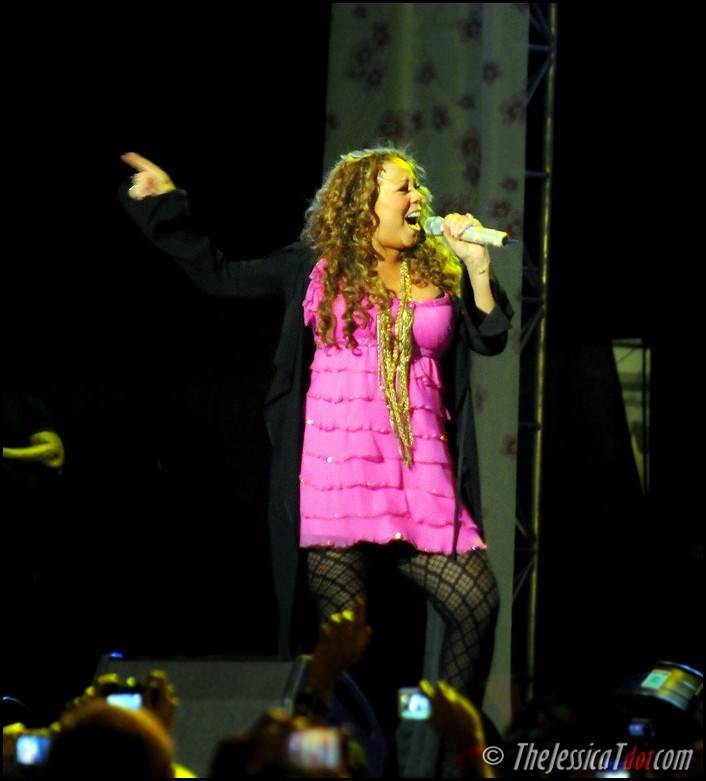 But what can I say?

Although I'm no hardcore fan of hers, she was fantastic on stage – albeit cracking a few lame bimbo jokes or two of course.

But it was all gooooooood.

Her signature squeals can really hit all the drastically sky-high notes beyond words!

I bet that would be an understatement already but how many people have actually saw her live in action doing it?? That's why I just HAVE to say it. She was really that good, heard with my very own ears (without autotune, nothing!) directly within my line of vision. *bows* 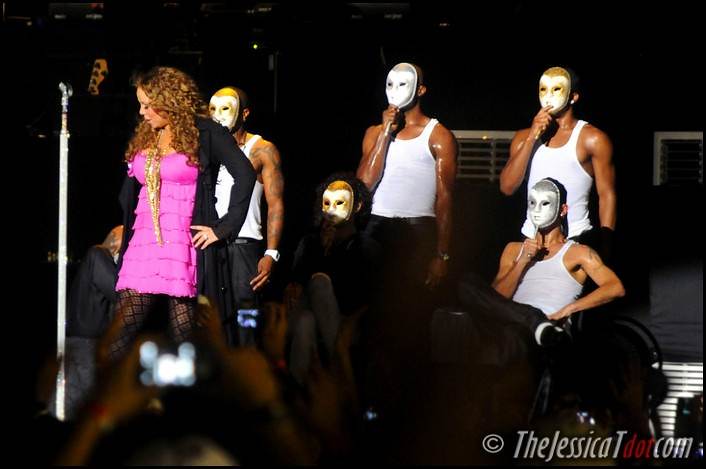 Props go to her back up dancers as well.

They fired up the energy and the mood pretty damn good!

Just before it was about to end, there was a poignant moment.

She got down on her knees and had a "personal" moment with her fans in front.

Just call my name…. and I'll be there~

Couldn't really hear what she was saying though but through video close ups of the fans faces, I could see some of them had tears in their eyes. 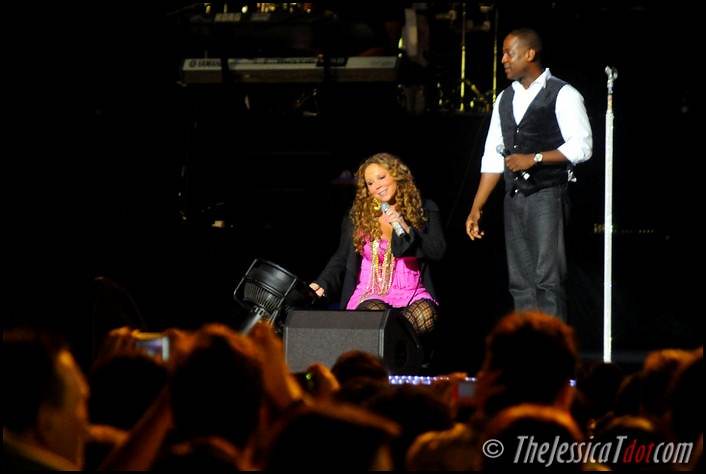 Thank you Mariah for touching the hearts of your fans

At least the ones in front LOL 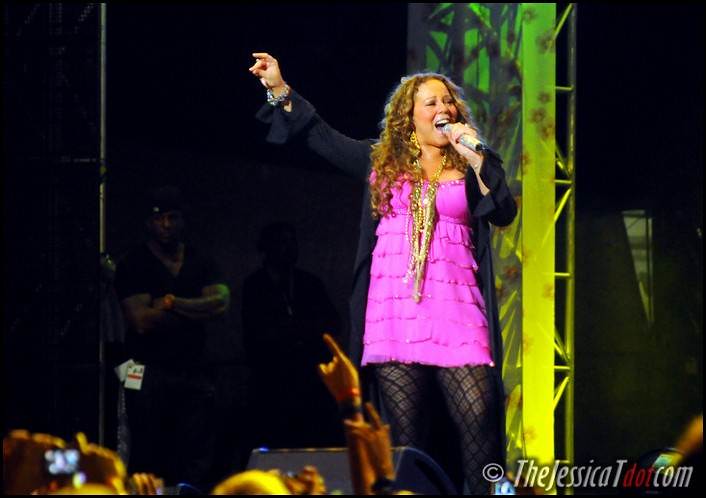 Congratulations on your pregnancy and towards motherhood!

I wish you well.