I know I owe everyone (especially the guys) this post! Thanks for constantly bugging and reminding me for it hehe! 😀 Don't worry, I did not forget…  just had lotsa issues with YouTube on uploading all those huge HD videos – all 12 of them, just for you to see!

Anyways, the article which I've written on VGL is already published on my column at the Malaysian Mirror.

Go check it out if ya haven't 😀 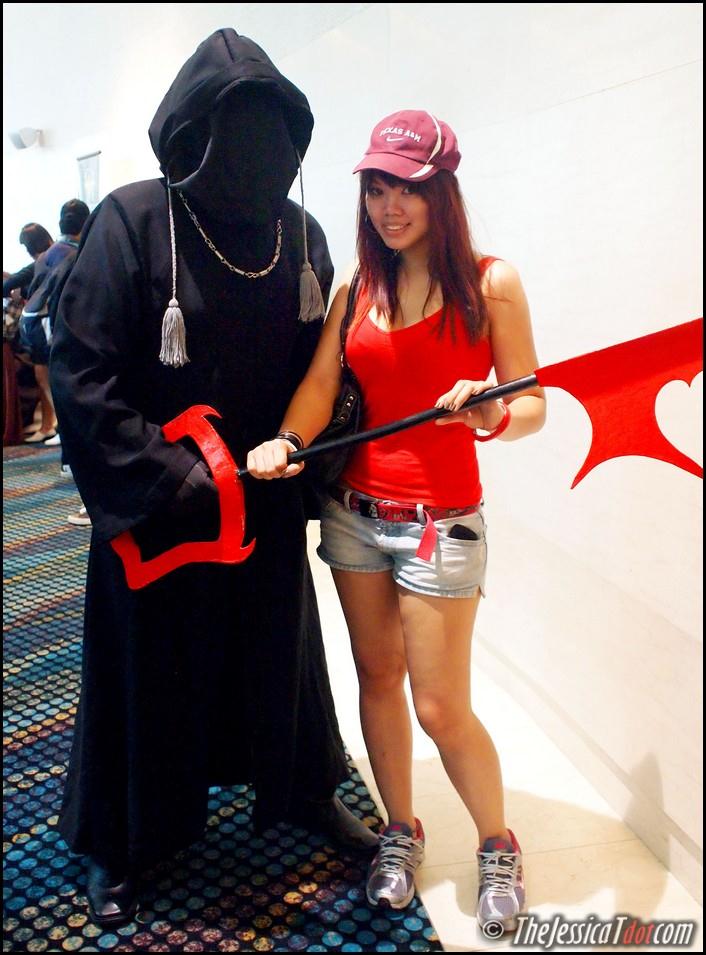 Unknown from Kingdom Hearts and I 😀

So the 1st thing I did upon reaching was well… dive into the pool of cosplayers of course! There were so many of them – it was hard to grab hold of each and everyone too! So here were the ones that weren't so busy storming around KL Convention Center 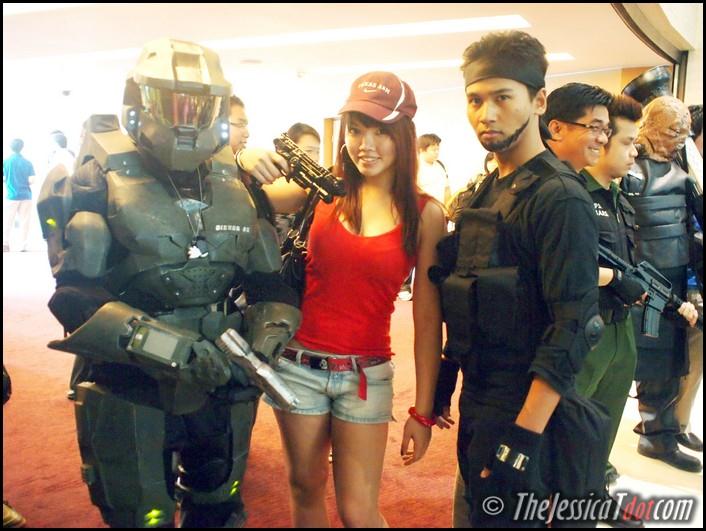 with Chief from halo and Solid Snake from Metal Gear Solid 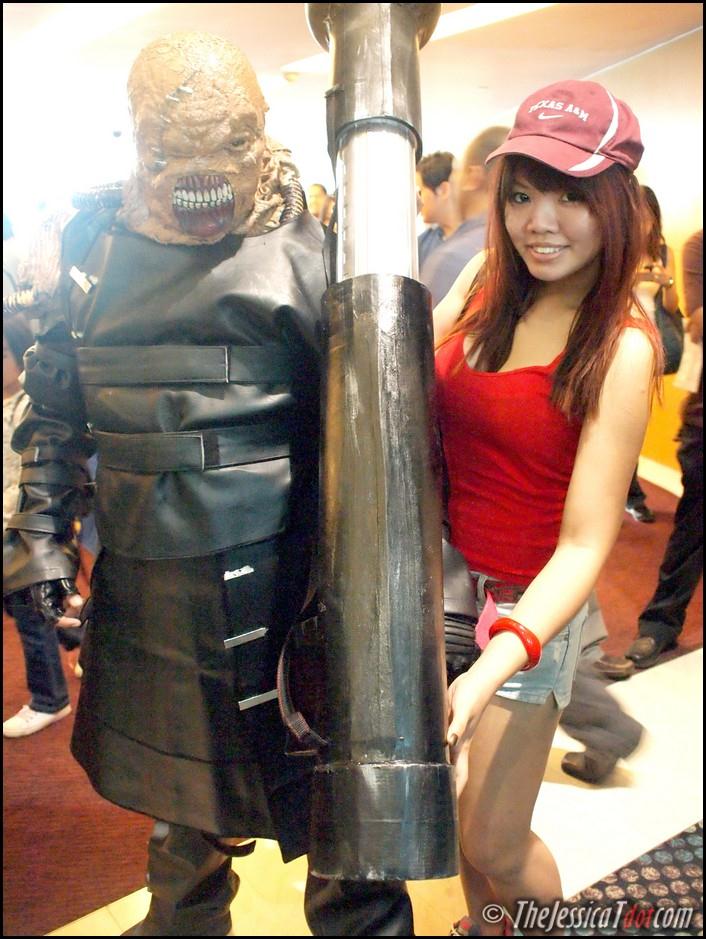 And who could ever forget, the one and only Nemesis from Resident Evil! 😀

He's the winner of the cosplay competition btw

Bumped into many other Final Fantasy characters and friends too. Oooh and also winners of my blog contest for VGL ticket giveaways too. They were the winning entries 🙂 Such a creative answer. You can take a look at it here if ya want hee. 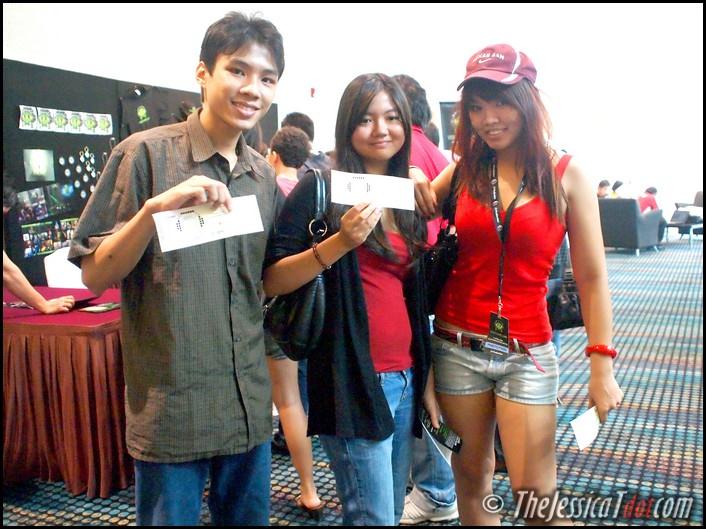 Hope you guys enjoyed the gig as much as I did! 😀

Before I made my way to the main entrance of the auditorium, the Plenary Hall, I couldn't help but to snap a piccie of all the cars in the open car park. Whoa! It was full house babeh! Looks like lotsa people are as eager to catch VGL live in Malaysia too! 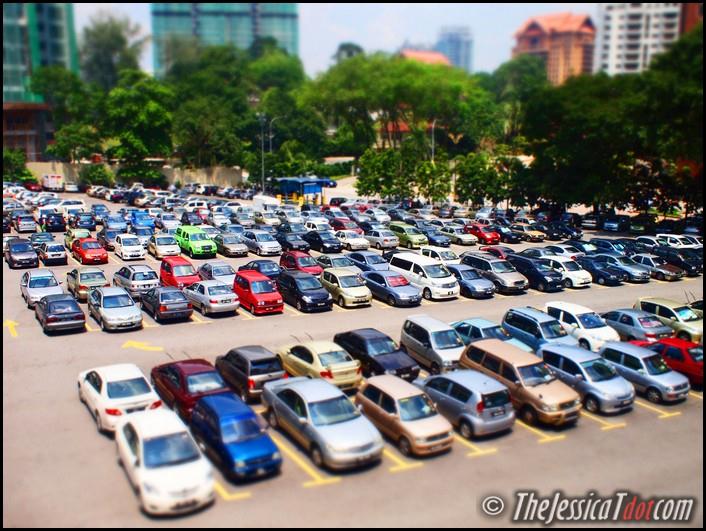 Come one, come all!

Thank goodness I chartered the LRT here. No parking headaches for me! 😛

After passing through security and door after door, I was finally here. Now this is gonna be an astral performance of a digital grandeur! Can't wait can't wait 😀 Lights, orchestra, action!

BUT FIRST – READ THIS CAREFULLY BEFORE YOU PROCEED!

What you are going to view next is going to be very video heavy + pictures. But I strongly encourage you to watch all the videos 😀 It's worth every single second of your life with your mouth hanging wide open trust me, you're gonna be so impressed by the gig, just like I was! 😀 (applies to the non video gamers too!) 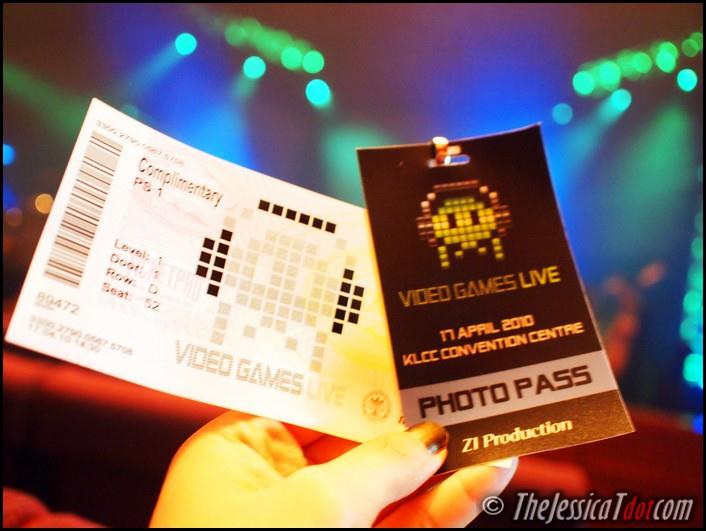 Coincidentally, the show began just as I was taking my seat. I didn't miss anything woo hoo! 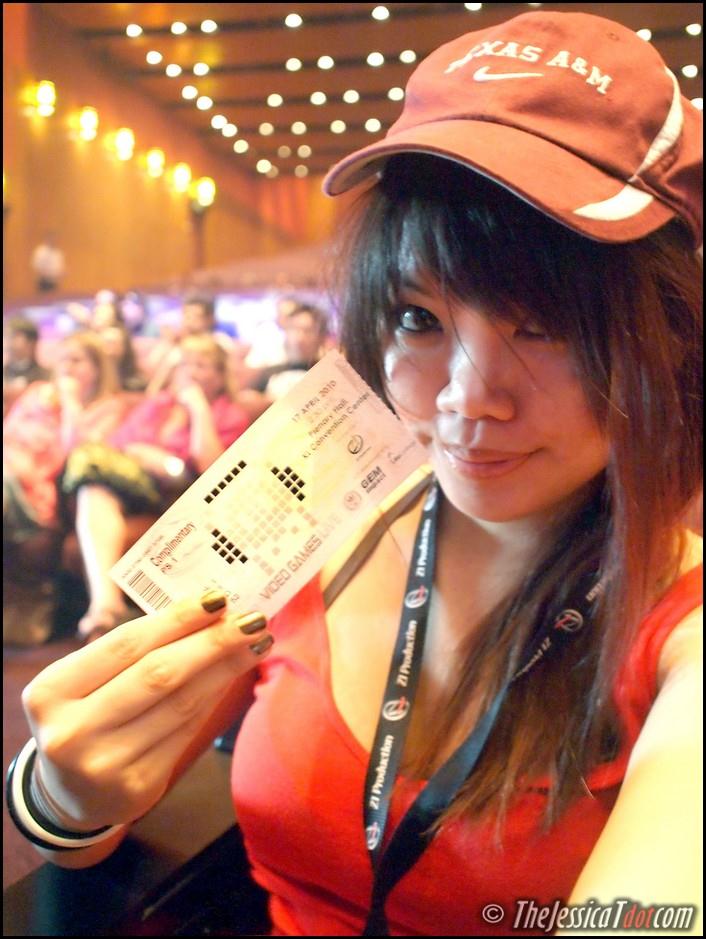 It began with a really comical video of Pacman. I'm sure everyone can relate to that Video Game. It's so old skool! 😀 I remember playing it all the time on my console and the huge-ass Gameboy. It's a pity Pacman isn't built in my Blackberry! Or else I'd play my thumbs off haha 😀 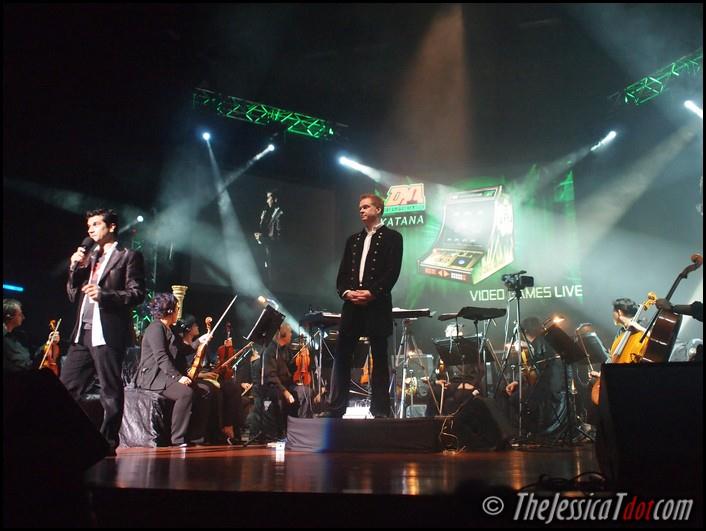 The next performance was Pong, followed by Tetris. So smart of them to begin with all the old skool games. It really evokes childhood emotions!

So after all those "traditional" video games, the orchestra and talents moved on to Metal Gear Solid. This is one, which I believe, is a popular fad among the lads 😀 The best part was, an army guy came out all armed with weapons in the midst of the concert! 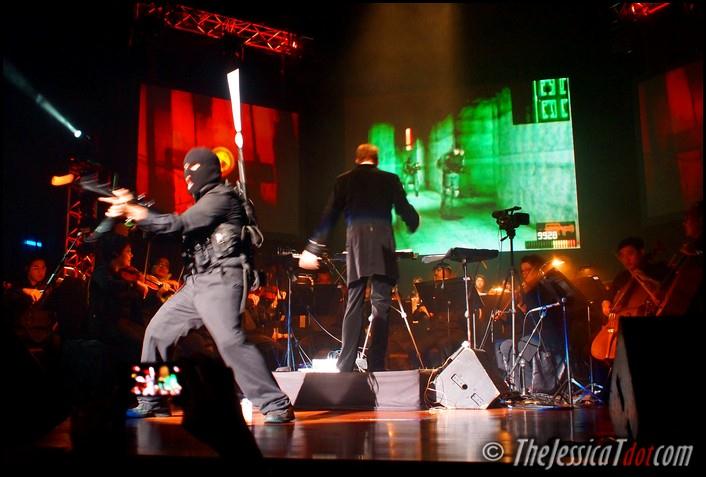 We were caught by surprised, loved it though 😀

There ya go, a HD video which I've also recorded for you to see of the performance of Metal Gear Solid :

The next one was fiery and full of angst. The lighting changed to fierce hues of red and the tempo quickened rapidly. It was none other than God of War. I know most boys likes it too! In the email requests I received, this was a popular favorite for me to share with you guys.

Don't worry lah, I will share all for shure 😀 Keep all to myself for what? To eat for tomorrow's breakfast meh 😛 😛 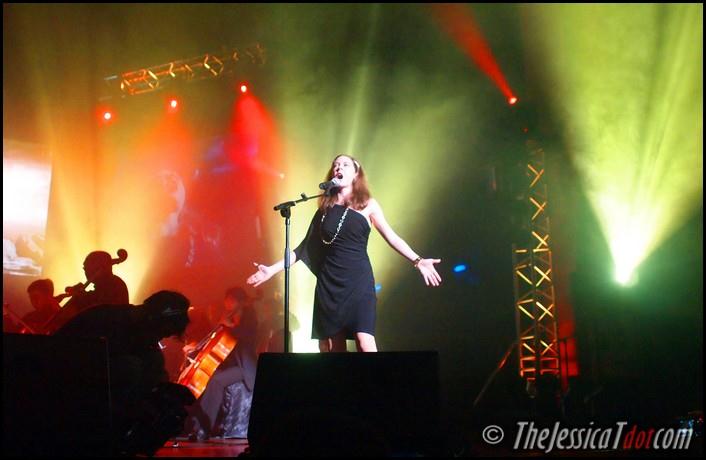 The next performance was a really good interaction with the audience. Tom (the host and main guitarist) actually picked someone out from the crowd to join them upstage. Smart fellow picked a 40 year old man! It was a rare sight to see – not to mention a rather hilarious one too – to see a fully grown man running hysterically as the spaceship of Space Invaders.

He was supposed to shoot the aliens on top, but this time, he was the spaceship itself

One part I found really touching and meaningful was that Ralph Bear, the inventor of Video Games back in the decades was speaking to us live via Skype. He shared with us how technology has moved so much since his invention of the TV games, and now able to be here with us.

The whole auditorium chorally thanked him for his creations after his speech!

Gawd that must've meant a lot to him *big watery eyes*

Shadow of the Collussus next! Who likes this game or have played it before? 😀

One of the Video Games performances which I can TOTALLY relate to, is Sonic the Hedgehog! Hee! Who doesn't remember that blue rolling ball of fun and his sidekick? 😀 Superlove this to the max! The orchestra played it so well too woots!

Hailing from the Legend of Zelda, is Link playing the flute! 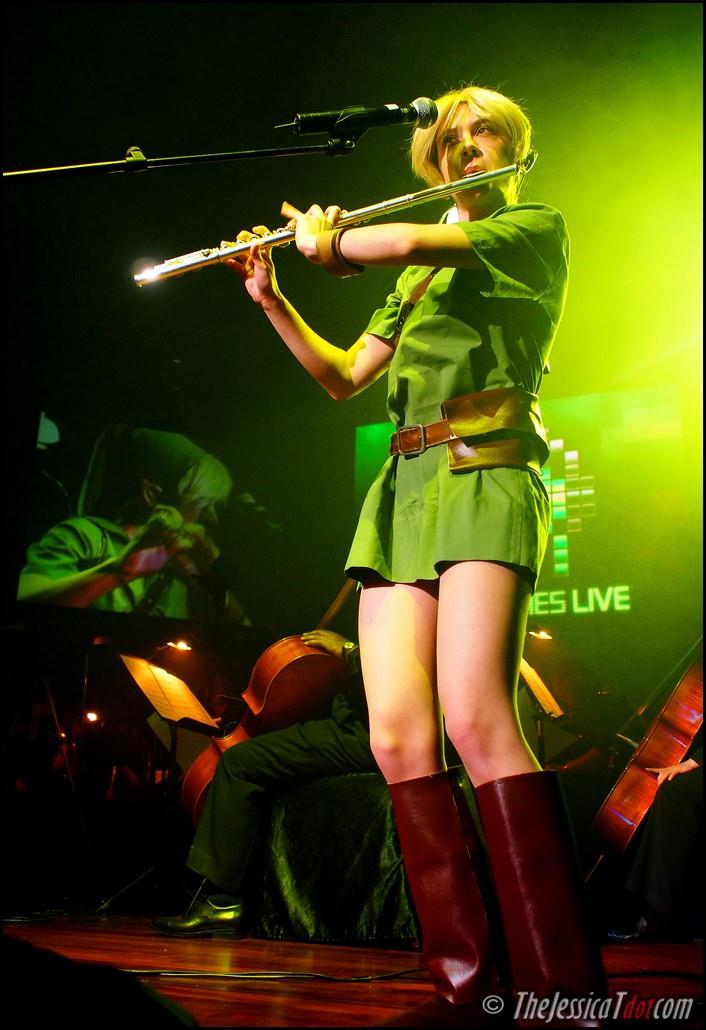 She played it so deftly with her fingers and rhythmic melody complementing the impressive orchestral sounds too. Color schemes changed as well, all to bright shades of green 😀 Here's the Zelda video for ya to see :

After that was Kingdom Hearts! Tom asked us, "What do you get when you love Disney cartoon characters and video games?" Everyone knew what was in store for us already. We all shouted in unison, "KINGDOM HEARTS!"

And there ya go!

There was a 20 minute break and lotsa people exited the Plenary Hall to the loo, or so I assume. LOL why? Too exciting till it made everyone pee acid? hahahaha 😛 i kid! i kid! 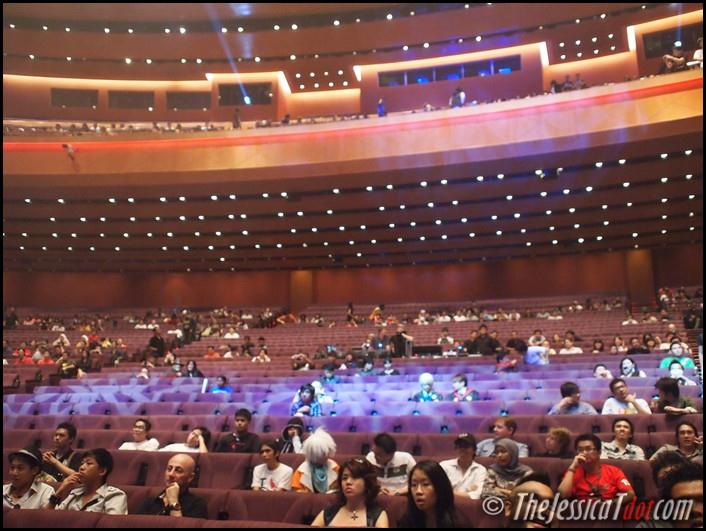 CAN YOU BELIEVE THIS WHOLE PLACE WAS CHOCK-FULL OF PEOPLE? 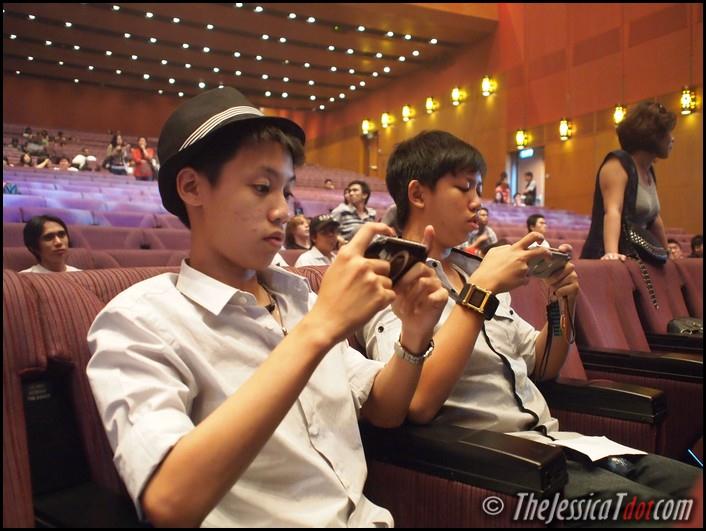 As expected, as it was a video geek fest after all 😛 😛

World of Warcraft was next after the break! And this is one game I know jolly well that every guy has played it at least once in their lives before. So many different maps of W.O.W, so little time to conquer them all ey? 😀

Okay okay. FINALLY. I. FELT. THAT. MY. LIFE. IS. COMPLETED. Hearing Super Mario Bros. live before me for the 1st time! This was really an orgasmic audio experience for me. Even till today, I still replay this Mario video over and over again and smile to myself! Okay I better stop telling you peeps this lest you reckon me as a demented Mario fool

Hey I'm an ardent fan of this game and goodness gracious, I've played almost every stage back then! To the land where no one has ever been to muahahaaha 😛

The symphony of this still echoes in my head…and yes that was me humming in 0.36 n woo-ing in 1.36 LOL

That was my world, my childhood realm on my old skool handheld console back in the days 😀

And yes I was bias tenkiuverymuch. Super Mario video gets 2 minutes of your life while all the other videos get 1 minute or 30 seconds each 😛

We were enticed to a very special performance next. The winner of the Guitar Hero auditions this morning was called upon to play live before a huge audience – us! He played along with Tom to the song 'Jump' by Van Halen. 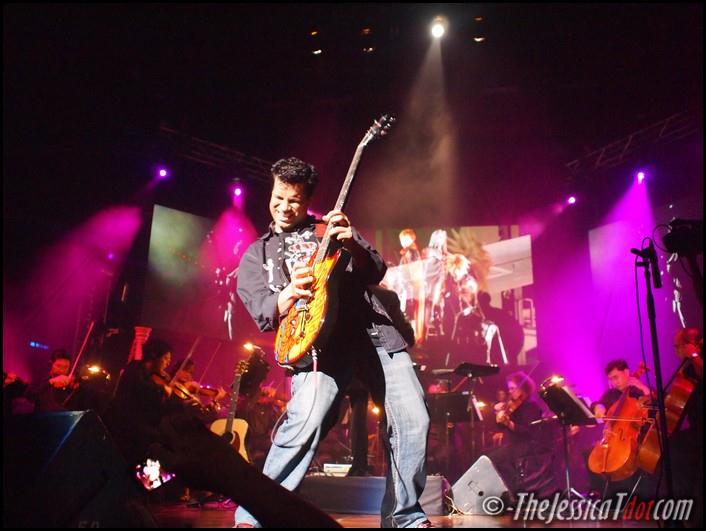 I'm certain all the Guitar Hero fans know this, watch it now! 😀

Had to vigorously delete files after that to make room for more HD videos! 😀

Megaman, Halo and Final Fantasy VII was next and I'm pretty darn sure that if I didn't record this, you won't leave this blog with a smiling face! hahaha. Well, I know those 3 are popular faves too! And I personally LOVE the Final Fantasy series.

Final Fantasy VII – One Winged Angel
(this one's pretty orgasmic. But my Mario beats it anytime! Kill me for I'm bias without a doubt 😛 :P)

And so the fabulous Malaysian Orchestra and Jack (the conductor) and of course Tom himself wrapped it up with those, bowed and left the stage. 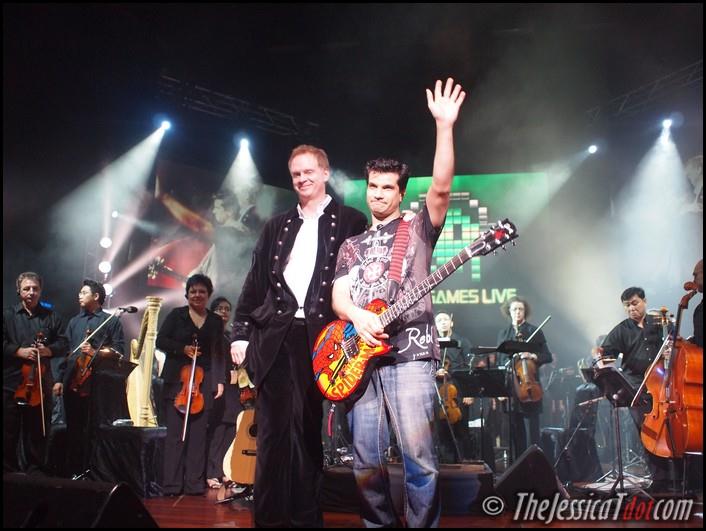 We wouldn't let them leave! Together, the whole auditorium chanted "ENCORE" at the very top of our voices and we were thrilled when they got back on stage!

Being such awesome sports, they played us Castlevania and Chronotrigger theme songs. And may I add that this is possibly the 1st orchestra ANYONE has ever seen whereby the conductor (in his high-and-mighty-position) getting off his podium, began headbanging while rockin' on hard with an electric guitar!

When they gave their final bows and proceeded to leave the stage, they were given the loudest, most supportive standing ovation and thunderous applause ever! 😀 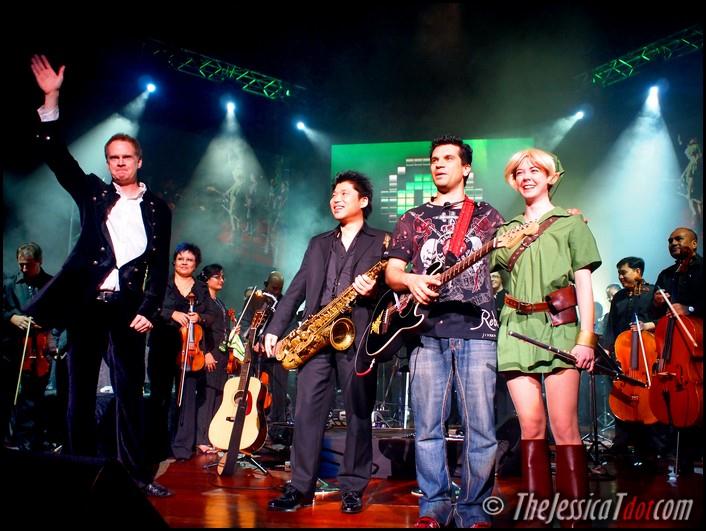 Cheers and yells of enthusiasm filled the Plenary Hall air. 😀 Heck, they deserved it –  it was THAT awesome.

All good things must come to an end, I then left the auditorium for some nomnoms with some newly made friends 😀 yes, geekfest unite! LOL. Anyhoozers, glad I was given the opportunity to watch this live before my very eyes and to share it with all of you! 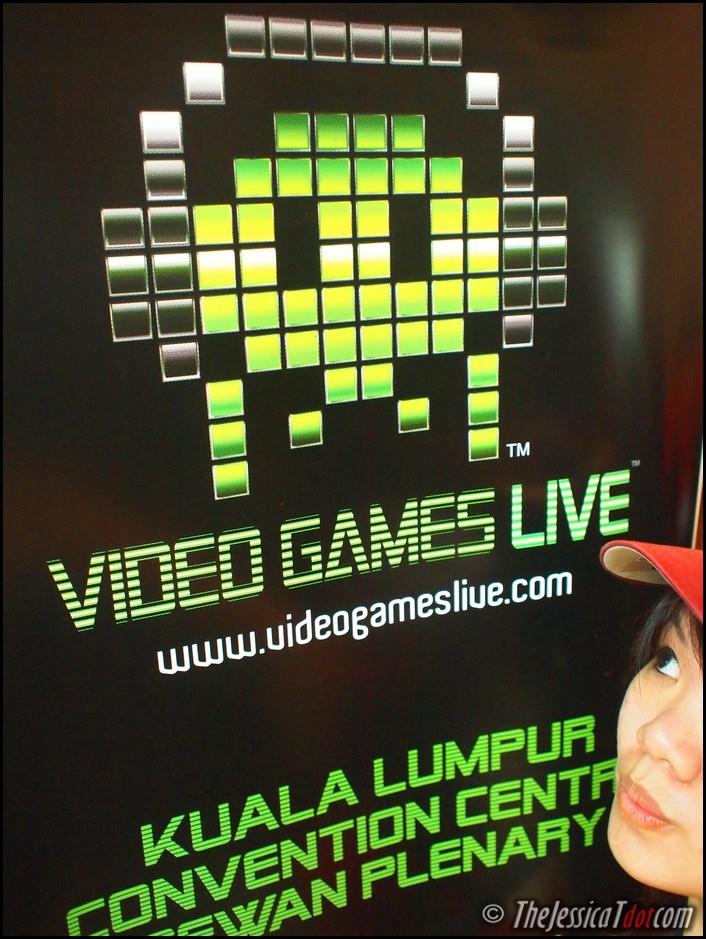 Come back to Malaysia next time!

All the tickets were sold out there too *gasp*