Gangfights & Police raids in all Sunway clubs spotted after Hennessy Artistry, The Opera!

It's 3AM now and I just got back from partying at this year's 1st installment of the Hennessy Artistry series. Uber tired! I almost nodded off when I was driving back home from Sunway. Had a long day and was exhausted to the bone. And the Free flow of Hennessy all night long doesn't help in my attempts to survive the entire night! 😀 😀

Anyhoozers, I caught sight of various unsightly events after I left the club

The moment I saw hoards of policemen (and women) roaming the clubbing triangle with their huge trucks with jailbars inside, I knew what to expect. Any seasoned clubber would know and forsee that this is imminent of a police raid. Which is not a bad thing – proper checks should be made to ensure all clubs were free of drugs, other substances, illegal immigrants and definitely underaged girls.

But as soon as I saw that, I whipped out my BB and published it on Twitter immediately to warn everyone who were still having a good time partying. Who would want a police raid to be the wet blanket of their night?

And within seconds, I had numerous RTs from my fellow tweeples – also mass broadcasting the news. Let's just hope that innocent party peeps get out in time lest they be forced to spend another extra hour stuck inside 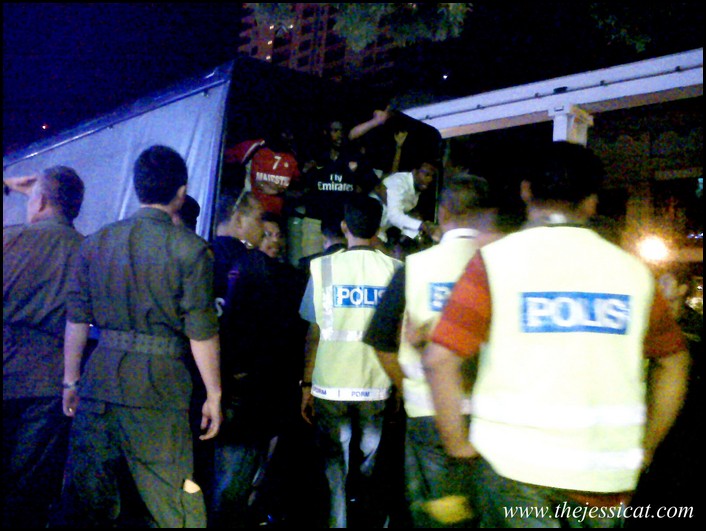 Underaged girls and foreigners without passports being hurled into the truck

a one way ticket to the Police Station! 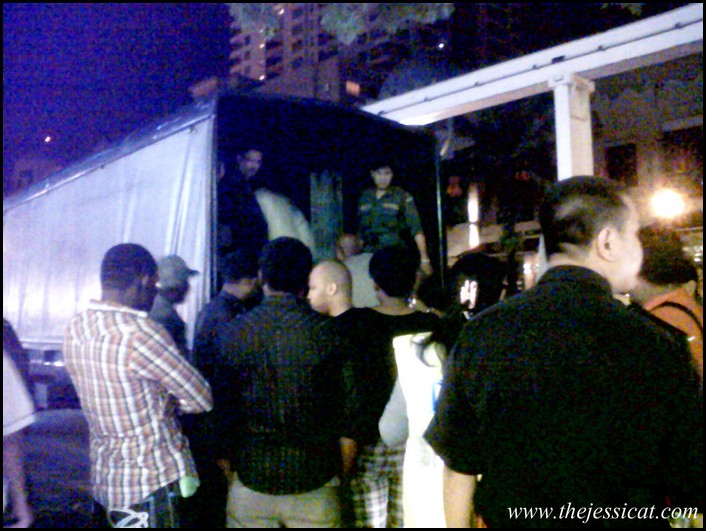 Oh and as expected, locals at their best. Being natural Malaysians, there was a huge gathering of people by-standing to "watch" the drama in the wee hours of the morning 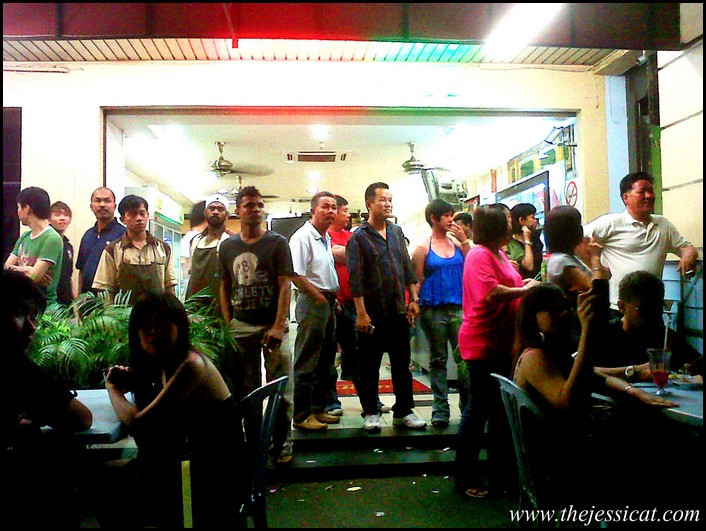 Soon after this, the police raids began to spread to all the clubs & pubs in Sunway!

namely The Opera, Euphoria, Rainforest and all the rest

Anyways, those were the only photos which I shot from my BB (you don't expect me to take out my DSLR right? I'll prolly get whacked up lol!) The rest of the time I was videoing the incident. But the club raids were not all. When I was leaving to get my car and drive home, I spotted more unfortunate incidents. Sigh. Everything happened within an hour! I saw the windscreen was all smashed up, the door detached from the car body and badly damaged headlights

Whether any of the people I know got caught, I wouldn't know

But I sure do hope not!

Here's the videos as I promised!

All just raw footages of the Police arresting the foreigners, didn't manage to catch the other scenarios!

The wife/girlfriend whatever kept insisting that she wanted to stick with him when he was arrested!

There was a really dreadful gridlock which backed up the traffic all the way around the corner of the 2 buildings!

Everyone in the nearby mamak stall was watching intently

TheJessicaT.com is in support of responsible partying