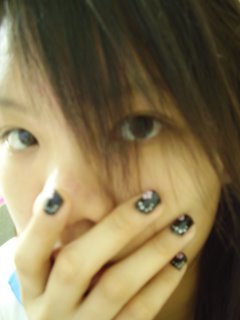 Heyhey.. it’s me again!
Yeah God hear my cry and well, decided to help me out I guess?

I’m not going to Flix anymore, I’m celebrating my anniversary with my babyboii! -wheee- I don’t know how you did it, but everythng fell in place so smoothly. Thank You Lord

Post conversation with Carmen: My ears are warm and has a funny feeling to it.

ANYWAY, I enjoyed that conversation with you gurl… see ya soon!

oh, and I still havent done my manicure. That was supposed to be like, what, 4hours ago?
*lol*

Yup.. right after the Teachers’ Day celebration. I was ravenous as I gulped down Leena’s baked maceroni, Stacey’s potato salad, some one else’s stuff, my Pringles potato crisps and the like. It was fun as Catherine and I exchanged prank call experiences and yadda yadda~
The best part was, seeing Mr. Brandon sitting down shyly with Dashni oppressing him. *lol* She wasn’t exactly a terrorist, but she was more of checking him out very openly. Hmm.. that took a lot of guts. If I were her, I’d duck under a table and admire him from underneath. You go gurl! =)

But right now, my mind is running around in gridlocked circles. *sigh* yes no yes no.. yes? Can’t really explain what it is, but… it’s something about tomorrow. I haven’t gotten round to telling my boyfriend yet, but I will… SOON. It’s hard sometimes when we’re two very different people, yet so alike; and share a very intimate thing called love. Considering the fact that we’re both very open about almost everything, okay well… everything, to be precise; I would tell him. And, he would understand, no? I mean, we compromise in everything and this would be just like a tiny speck of dust on my skin Anyway, it’s not that it’s at night or anything… and there will be a function going on. In the evening, I might also be going to OAG’s Ignite Concert. So basically, I’ll be out the whole day.. which is fair as he is occupied tomorrow as well. I’d probably sound Greek to you.. but then again, you might not understand. Affairs of the heart is known for its complication.

Alright then Jess.. chin up, brave your heart and spill!

Time to give myself a manicure now.. out!