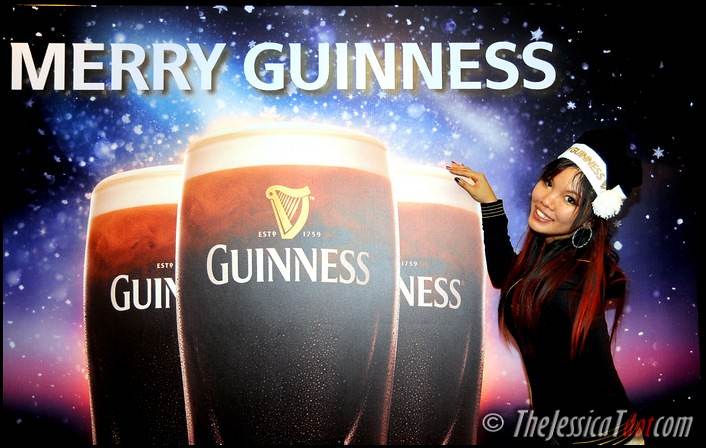 To those who are also celebrating, I hope you had a fantastic Christmas dinner with your family last night 🙂

Anyway, apart from the tradition of celebrating with TheFockers every year, imma share with you my first Christmas party of 2010! 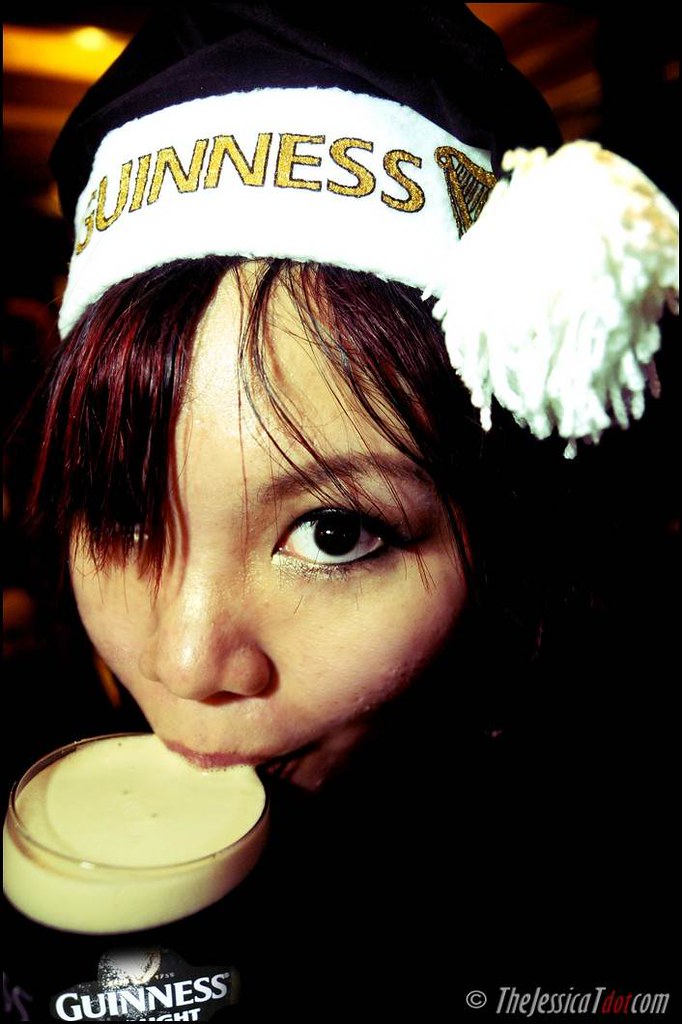 All thanks to Guinness! 😀 😀

So yeah.. a few weeks back, I was invited for Guinness' first series of Merry Guinness christmas dinners. This was held at Malone's Irish Restaurant & Bar in Sooka Sentral, adjacent to KL Sentral, Malaysia. 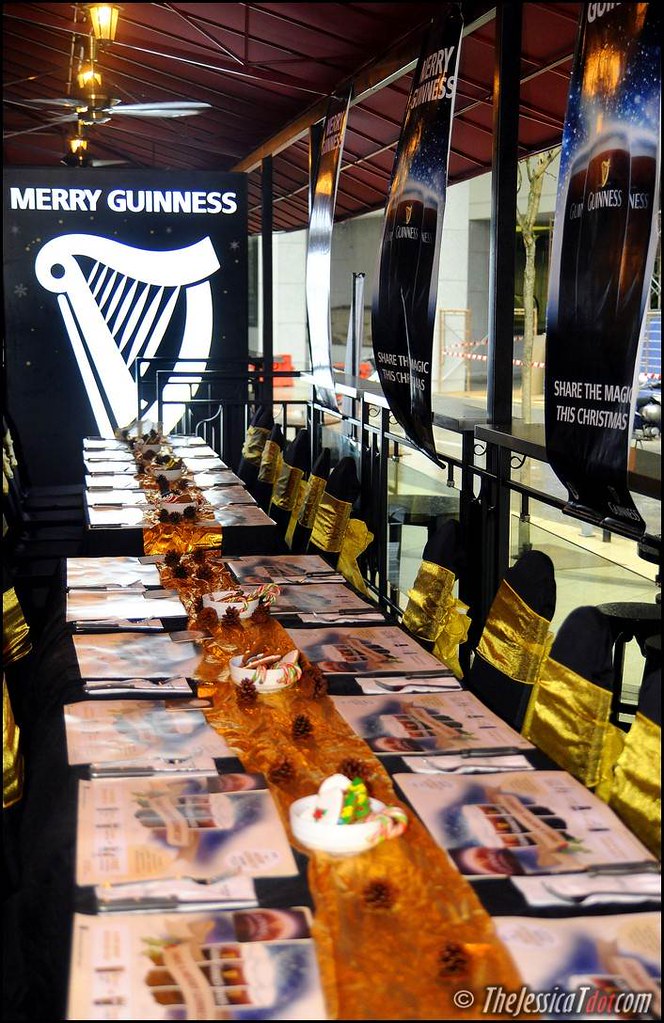 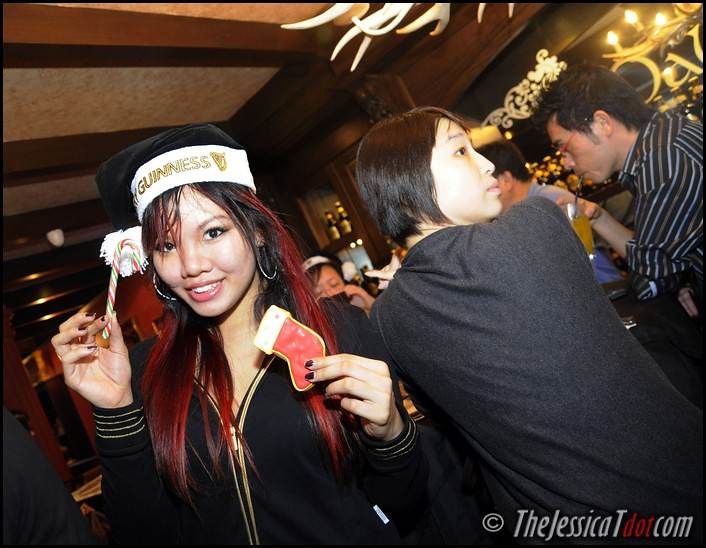 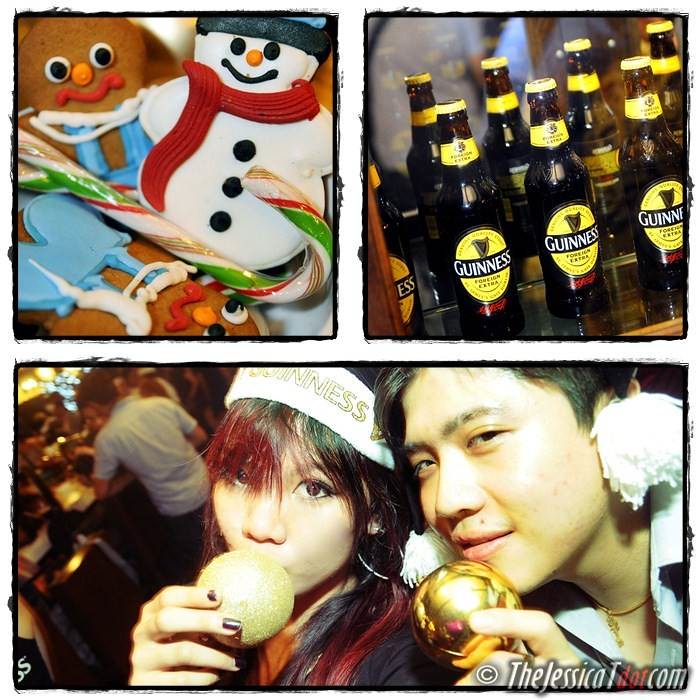 There was so much merriment in the haus and so much Guinness to go around… it's free-flow babeh! 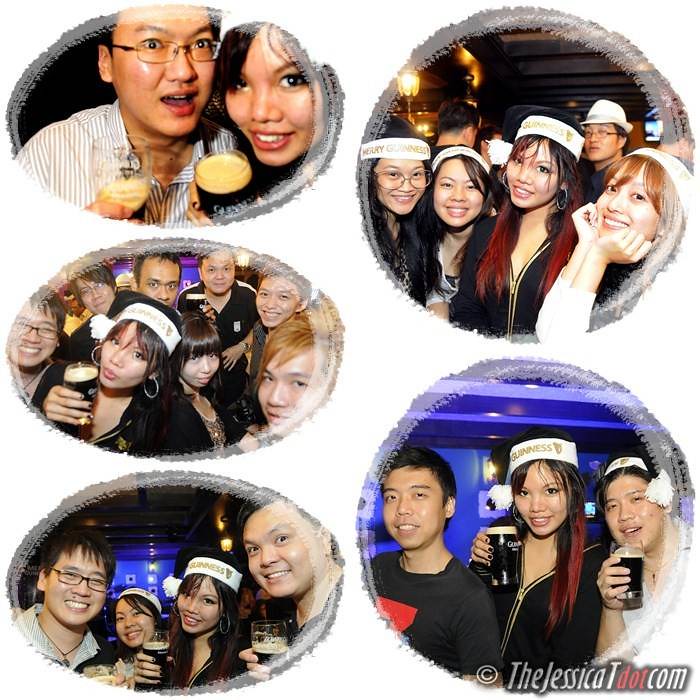 Walking further in, I spotted the traditional Christmas tree.

No Christmas party is complete without the evergreen coniferous tree! It's a pity we only have the artificial ones here in Malaysia 🙁 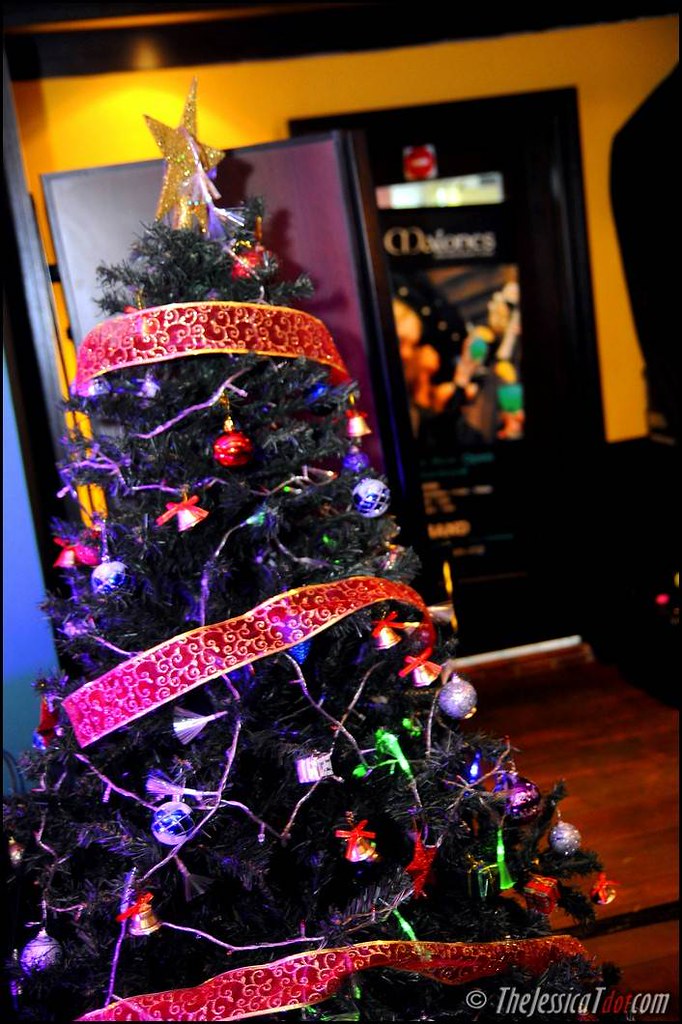 to chop down this tree and brings it back home for Christmas! 😀

After lots of mingling around over glasses and glasses of frothy ice-cold Guinness draught, the Christmas dinner was about to be officiated! 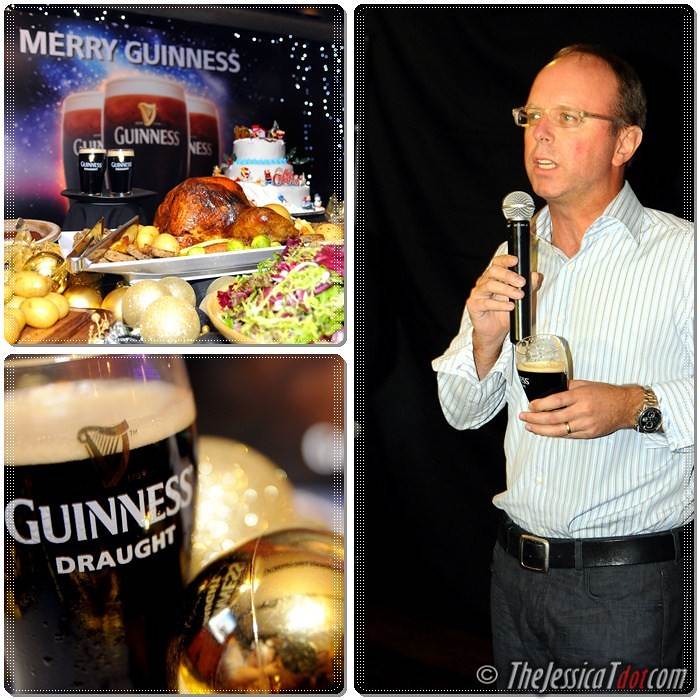 Welcoming all of us to the event 🙂

Are you ready to see what was served, guys? 😀

It was in such a dramatic manner! The black curtains fell right after he gave his short speech and revealed this sumptuous feast! 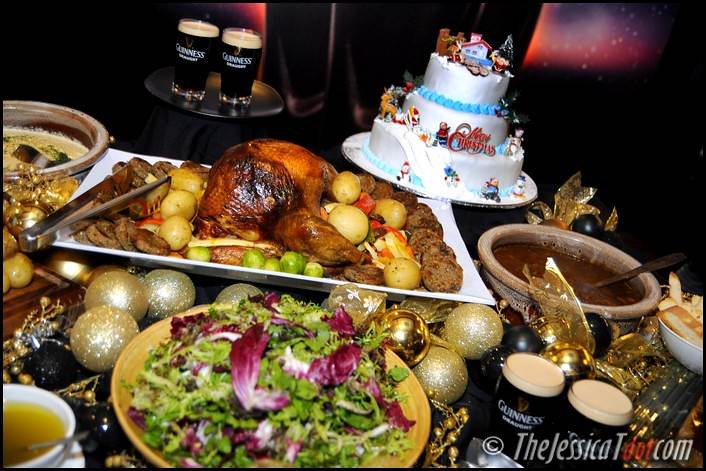 Now, that's what I call a table of gastronomic heaven! 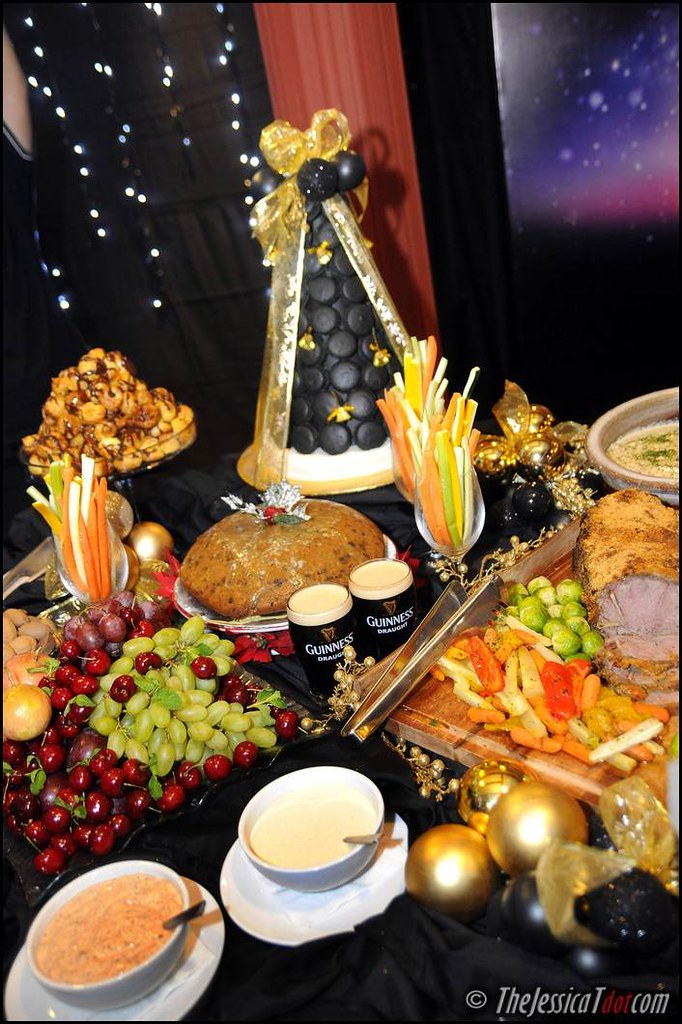 Especially over a pint of Guinness *clinks glass 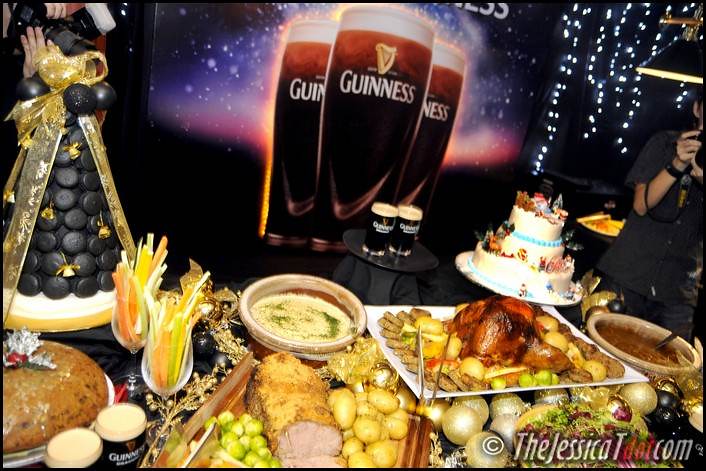 So yup, those are the food 🙂
In fact, that's only half of what was actually served that night!

And this is me looking all gluttony 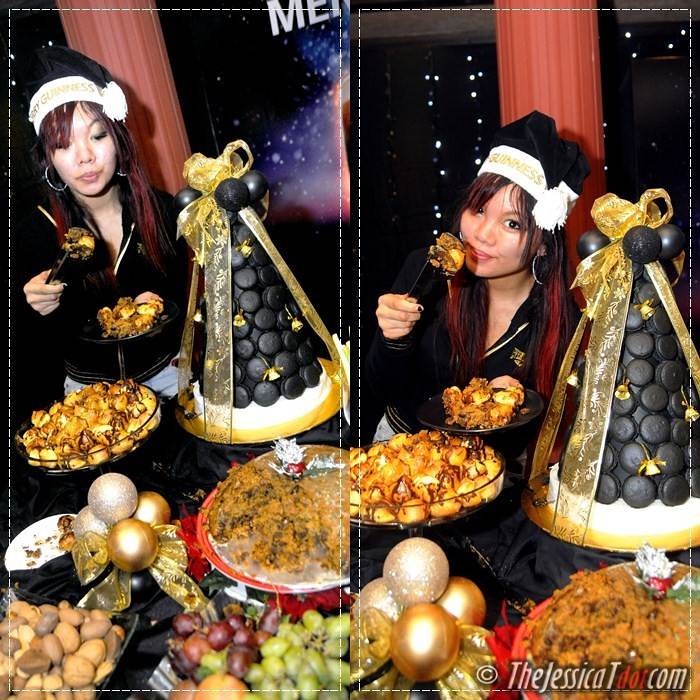 there were macarons, stollen cakes, foie gras, beef stroganoff and so much more I don't even remember!

There was also an action station for turkey slicing and cranberry sauce!

Oooh the yums. Talking about it makes me miss the turkey already. 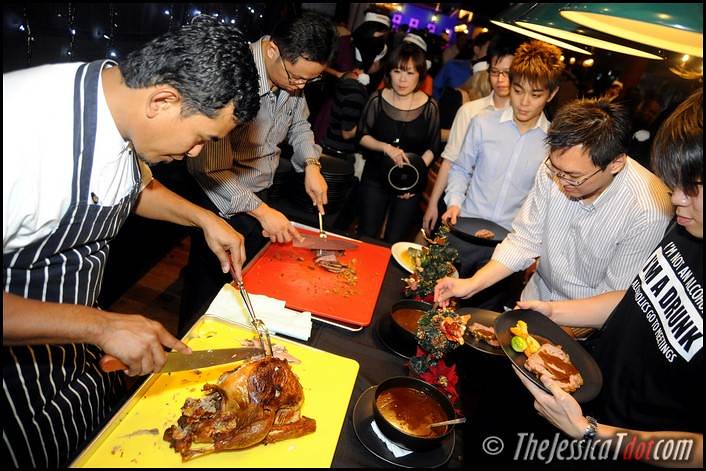 Please sir, may I have some more? 😛 Oliver Twist lolol. 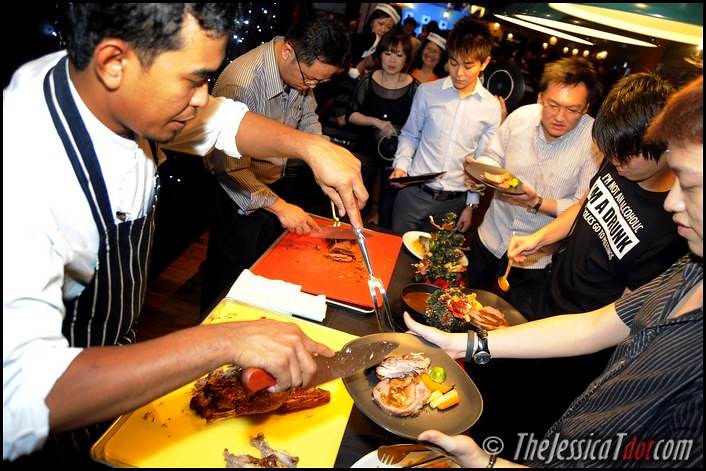 While we were devouring our hearty meals, there was a live band that played for us all! 🙂 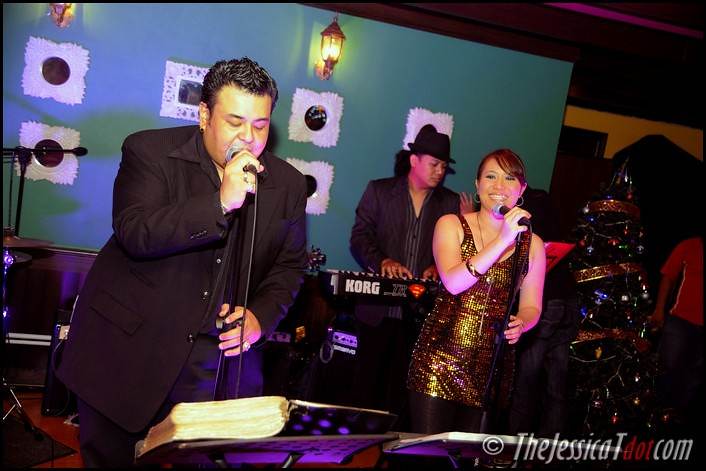 i personally loved Guinness' version of the !2 Days of Christmas

'cos it had something to do with fried chicken wings haha

And that's not all!

We were enticed to a magic show, which involved fire-eating, finger chopping, tangled knots and more 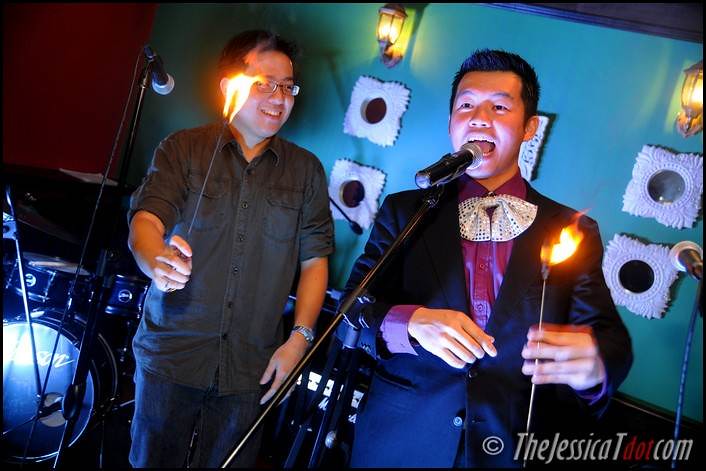 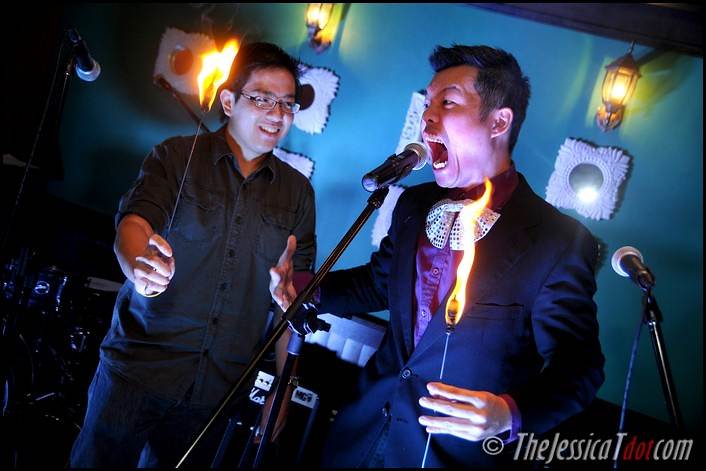 Soon they had a Q&A session where 5 limited edition Guinness miniature bottles were given out as prizes. 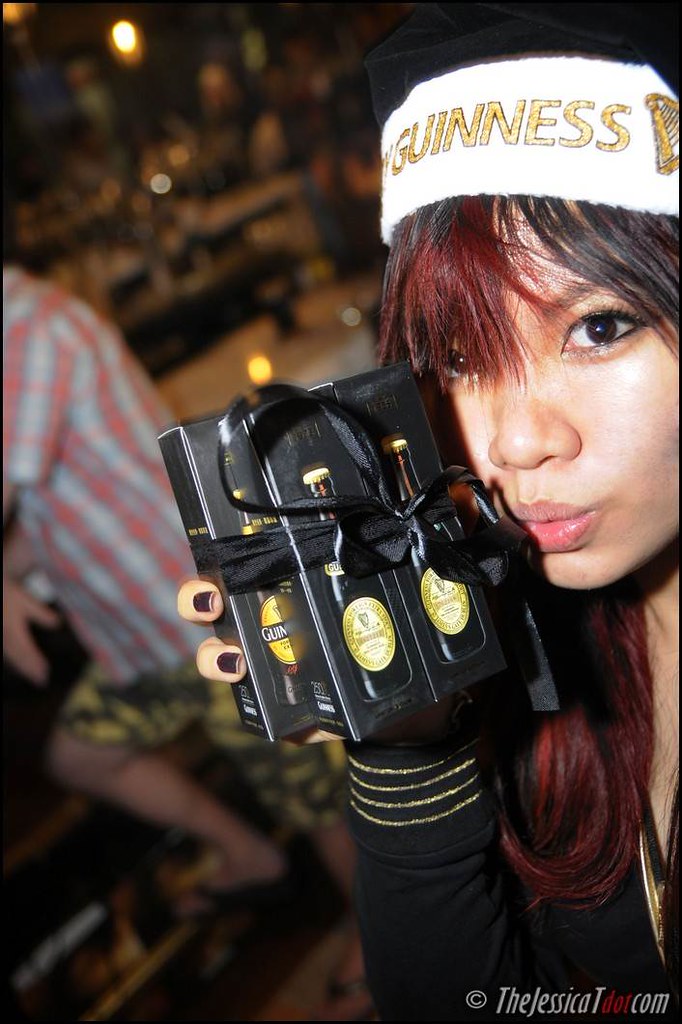 Tied so neatly with a black ribbon, I wished they were mine!

So I decided to join the Q&A. Hmm…the questions I could remember were –

How many pints of Guinness are served everyday?

What is the actual color of Guinness?

What is the name of Guinness' christmas event? 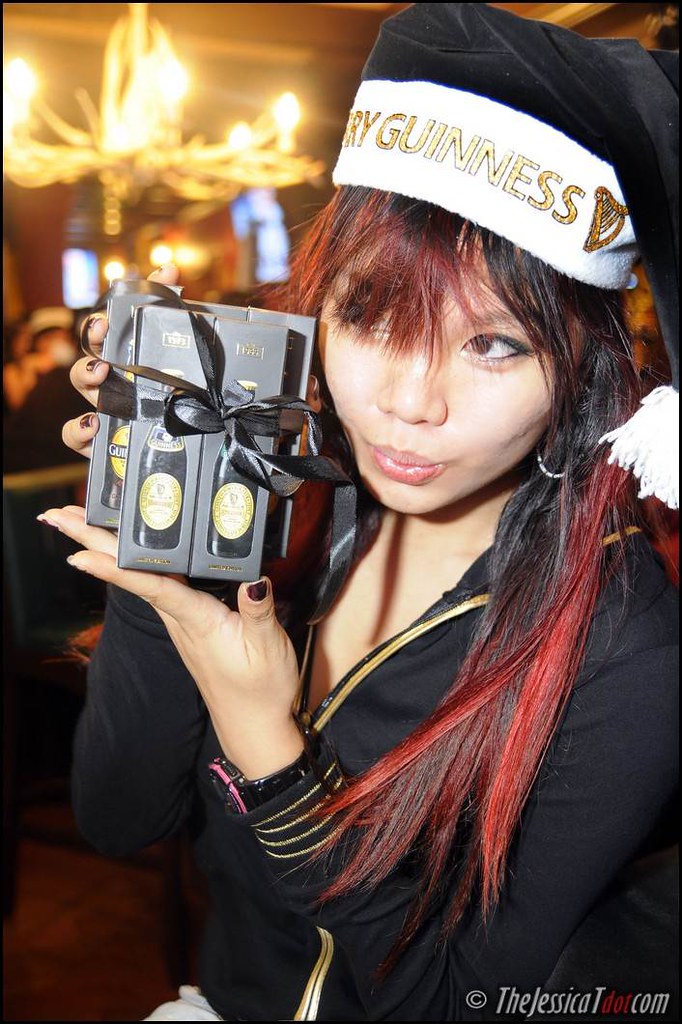 Well, my question was simple. So I managed to answer it correctly!

I absolutely love the antique bottles for my stash. It fits perfectly in my collection of alco 🙂 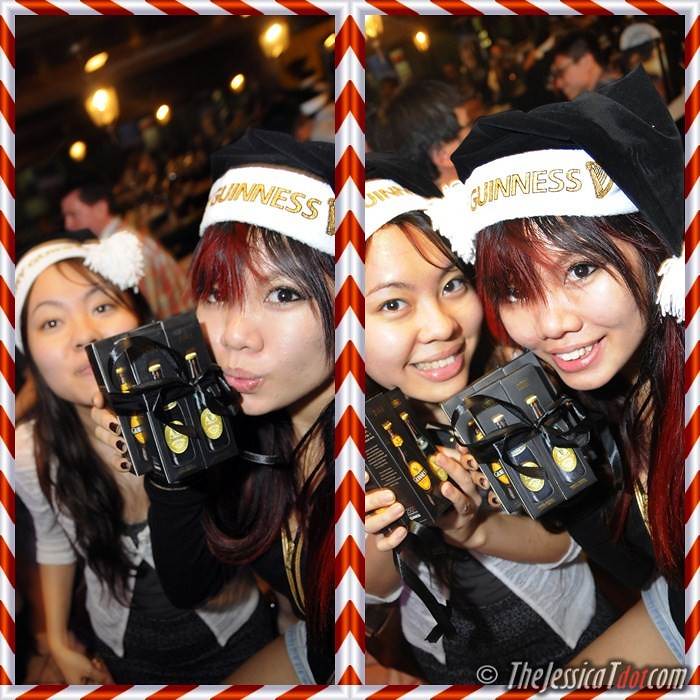 Yuenny won herself a set of these babies too!

I think she answered the color of Guinness question. The correct answer is Ruby Red! 🙂 (Yes it's not black, contrary to popular belief)

Here's a shot of my swag, courtesy of Guinness! 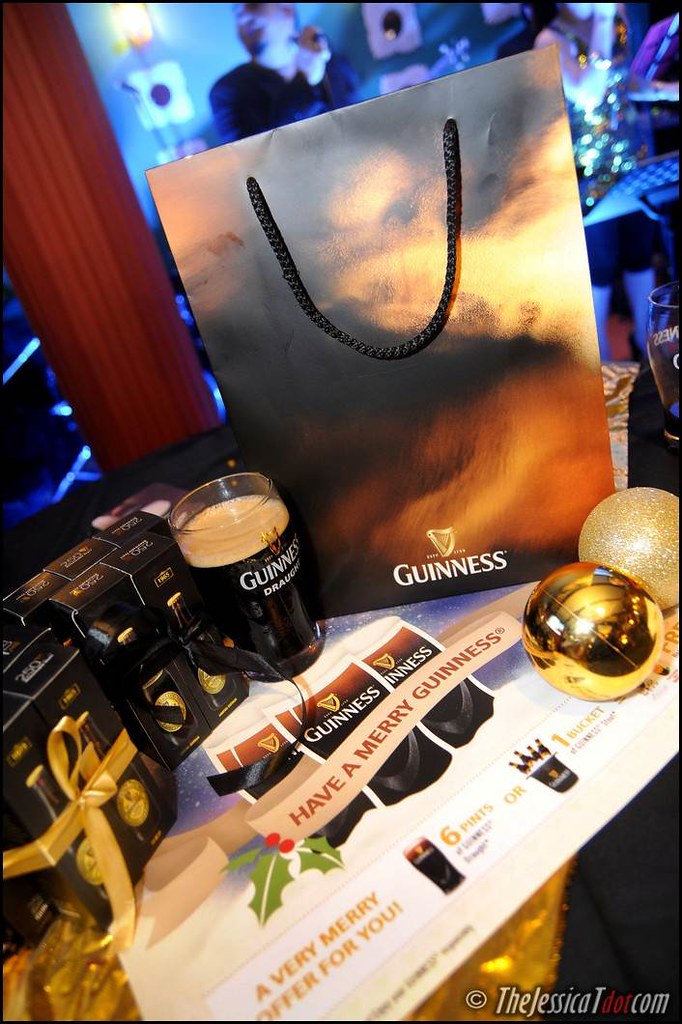 There's also another Guinness glass inside the paper bag,

'Who dreams of a white Christmas?' Tshirt, a Santa Hat and more!

Do you see that place mat which reads 'Have a Merry Guinness' above?

If you open it, it's actually a board game!! I'm SO going to bring it back home to play with thefockers tonight. 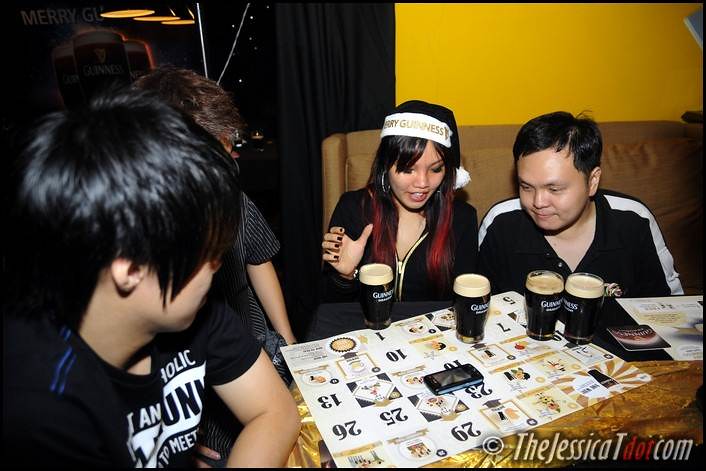 It's very much like snakes & ladders, only more exciting, Guinness draughts instead of snakes

and players require a good liver 😛 😛 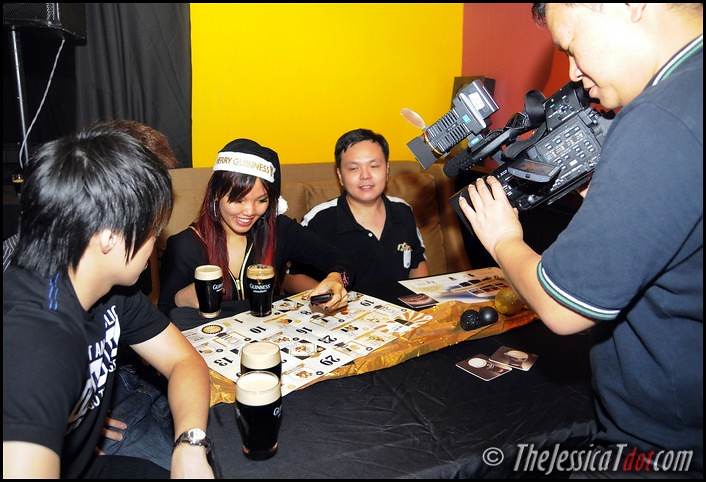 We're getting shot on film!

Guinness even made a bloggers video edition of Merry Guinness wishes and the party! 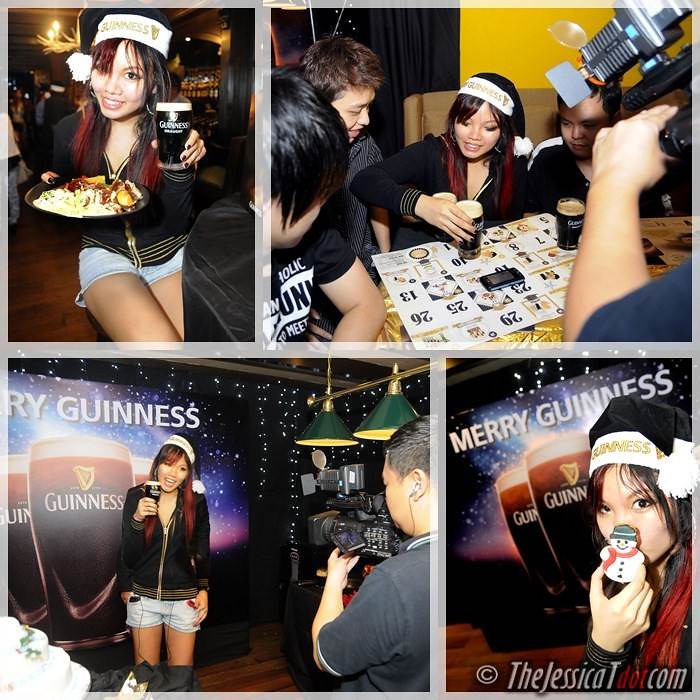 With frosty the snowman too!!!!

Of good food, catching up with good friends, good fun and festive air 🙂

I had fun celebrating my Christmas the Guinness way. Heads up! Merry Guinness promos are held in various outlets around the Klang Valley and other parts of Malaysia as well.

This coming Monday, I will be dining at Finnegan's Pub in Changkat BB for an Irish Christmas Dinner by Guinness. Can't wait! Will be bringing along one lucky person with meeeee 🙂 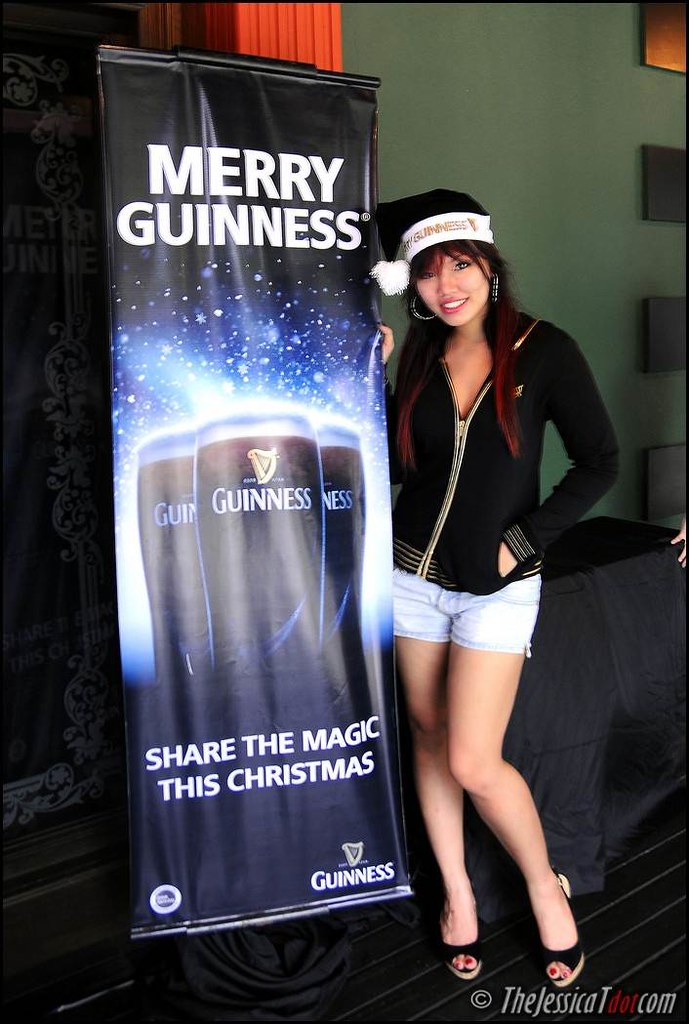 Do grab a pint of Guinness and enjoy the rest of your party!

Merry Christmas again and enjoy the rest of your holiday fellas