Story and photos by: Jessica Tan The raging blaze engulfed the village and emitted billows of pungent, black smoke which rose swiftly to the sky.

Clouds of thick soot, shrouding the surrounding residential buildings, could be seen from miles away.

The tragedy was believed to be triggered at 4.30pm today. 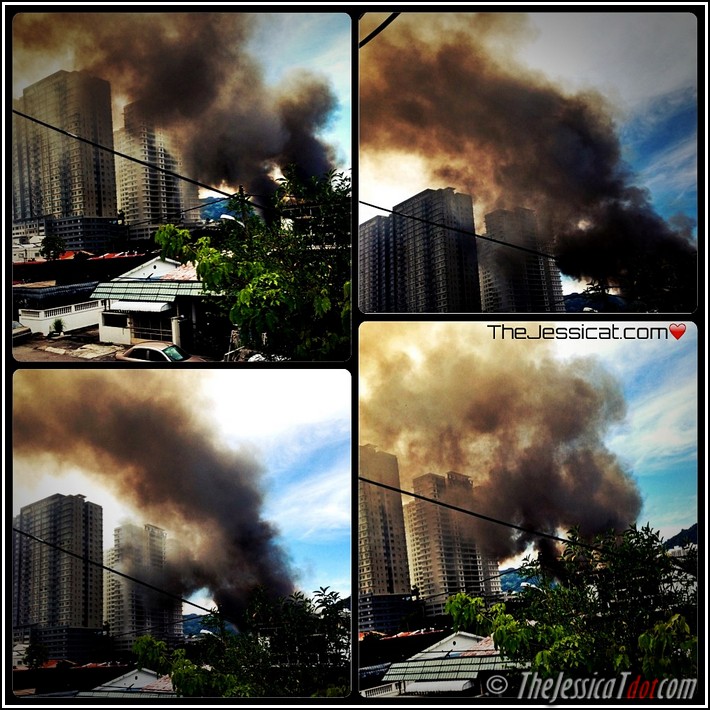 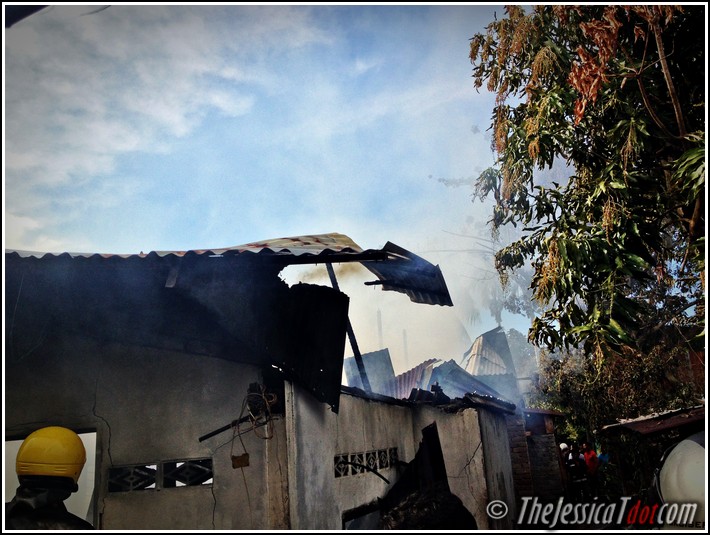 The houses were reduced to ashes very quickly, as the flames swept rapidly due to the strong wind.

Three fire engines and four police cars were seen at the incident. 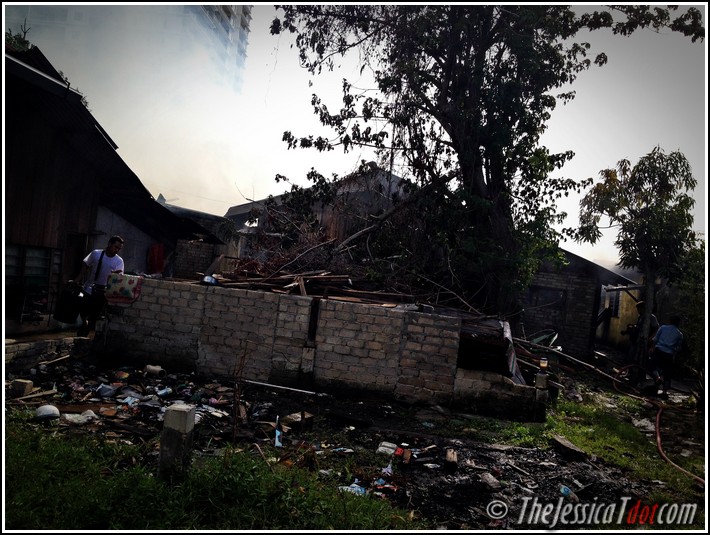 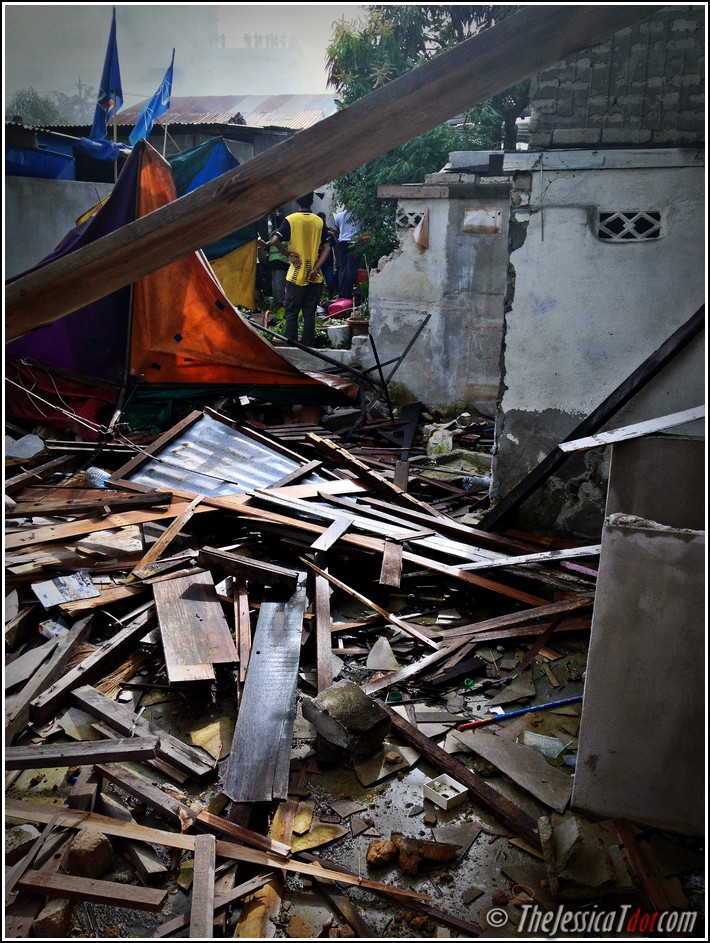 The fire was claimed to have started from a house located deep in the middle of their village.

The cause of the fire was yet to be determined, although several villagers alleged that it was due to old, leaking gas tanks in the kitchen belonging to one of the houses. 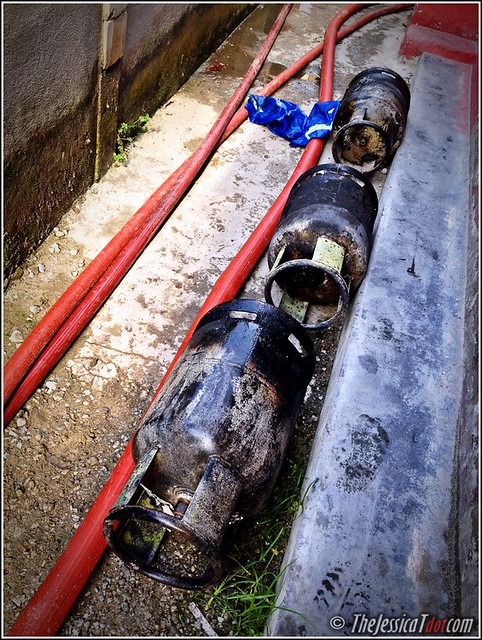 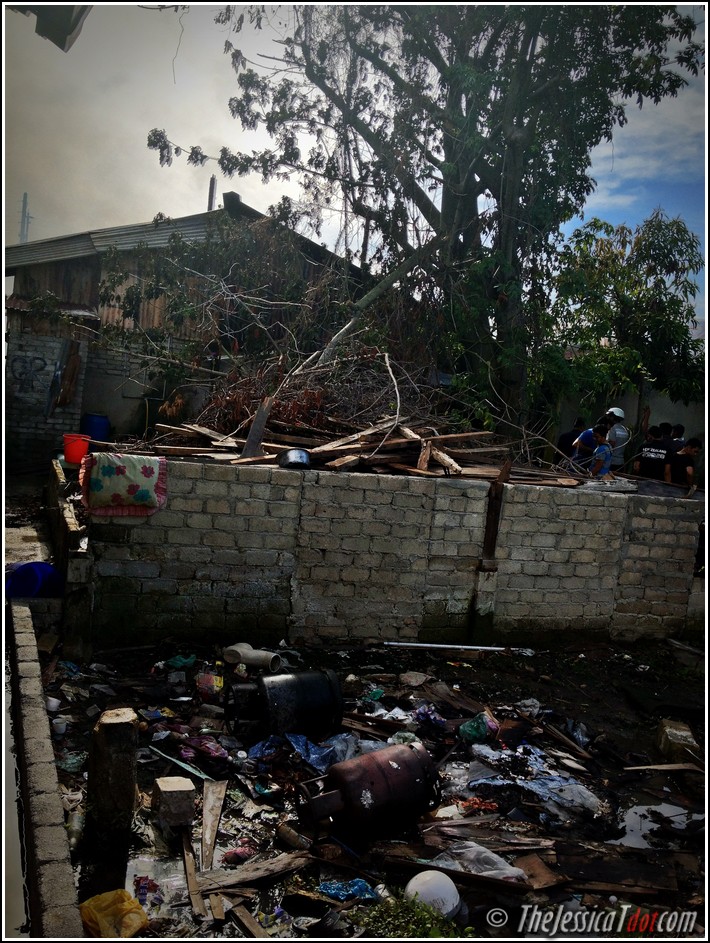 Fortunately, most of the gutted houses were empty, as owners and their families were away to celebrate Aidilfitri and some were on holiday during this Raya festive season.

A female village elder fainted at the scene. 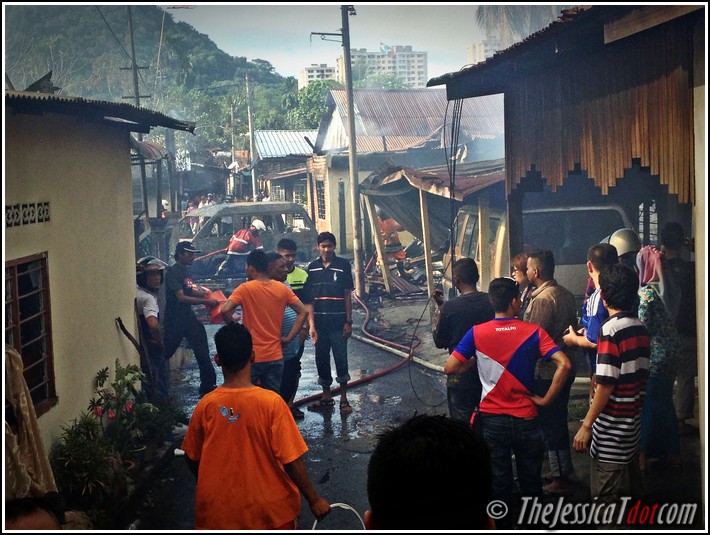 Children and relatives of the victims were seen weeping uncontrollably.

Another victim, whose van and motorcycle was charred beyond use, was inconsolable. 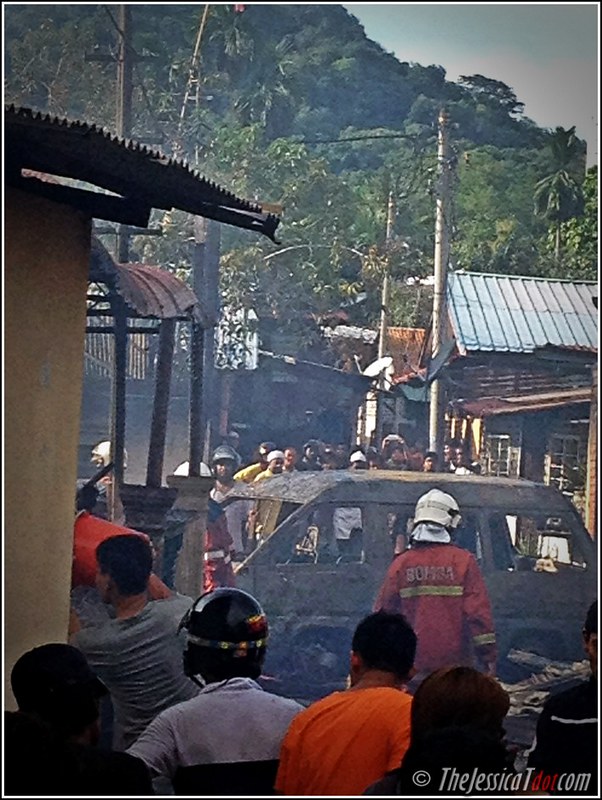 A villager said that he was having an afternoon nap, and was aware of the fire only when he was awaken by the screams of his neighbours.

He rushed outside to see a huge fire and smoke billowing from the insides of a few houses, and did not hesitate to alert his family before running out to safety.

A daughter of a victim, who declined to be named, spoke to us in tears.

The only thing she managed to salvage from the house was her father’s scooter.

Although her father’s house was gutted to ashes and her family left homeless, she was thankful that they were not home when the fire occurred. 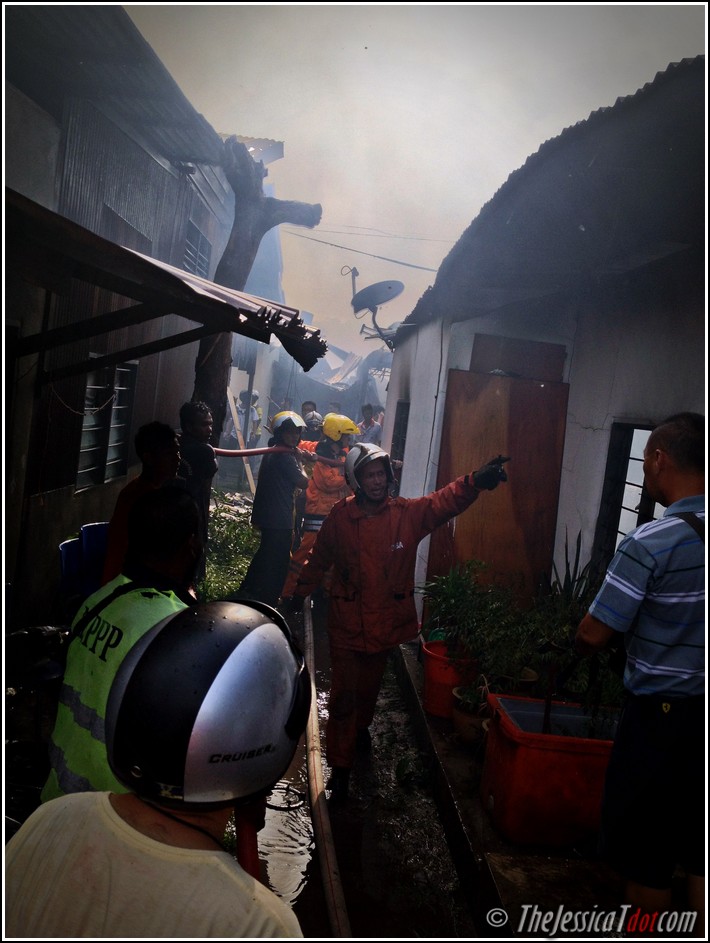 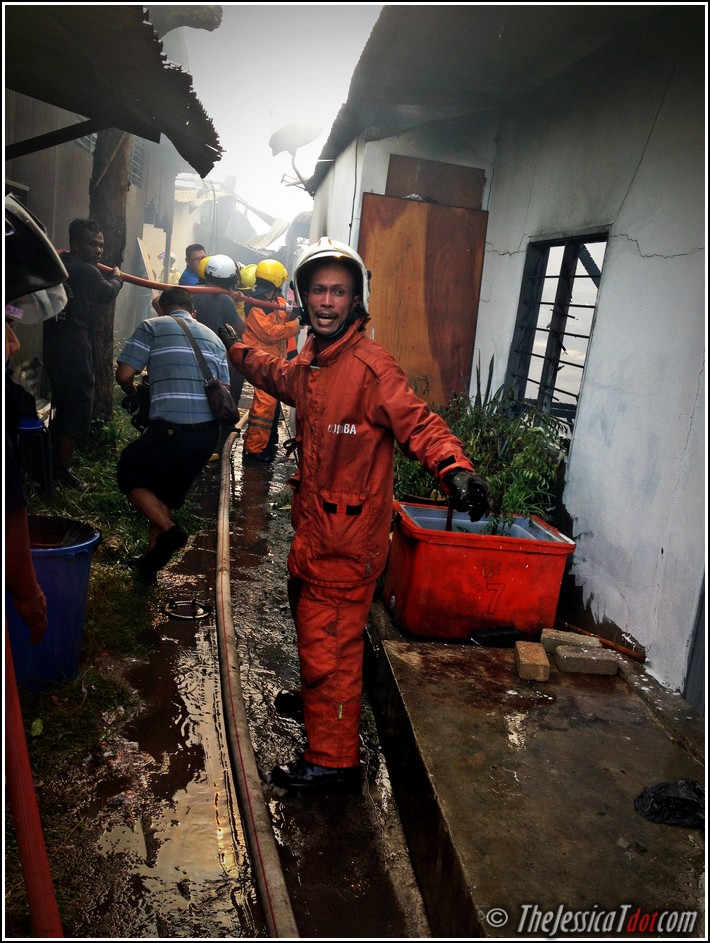 Some surrounding houses were successfully rescued in the nick of time with only a considerable amount of damage, while some others were completely consumed by the flames. 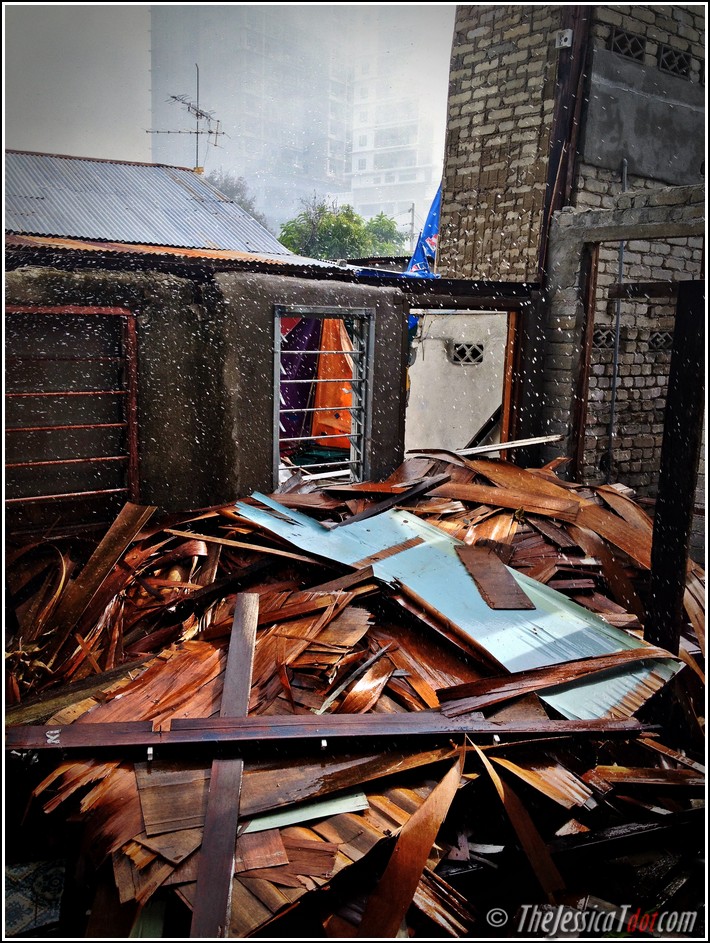 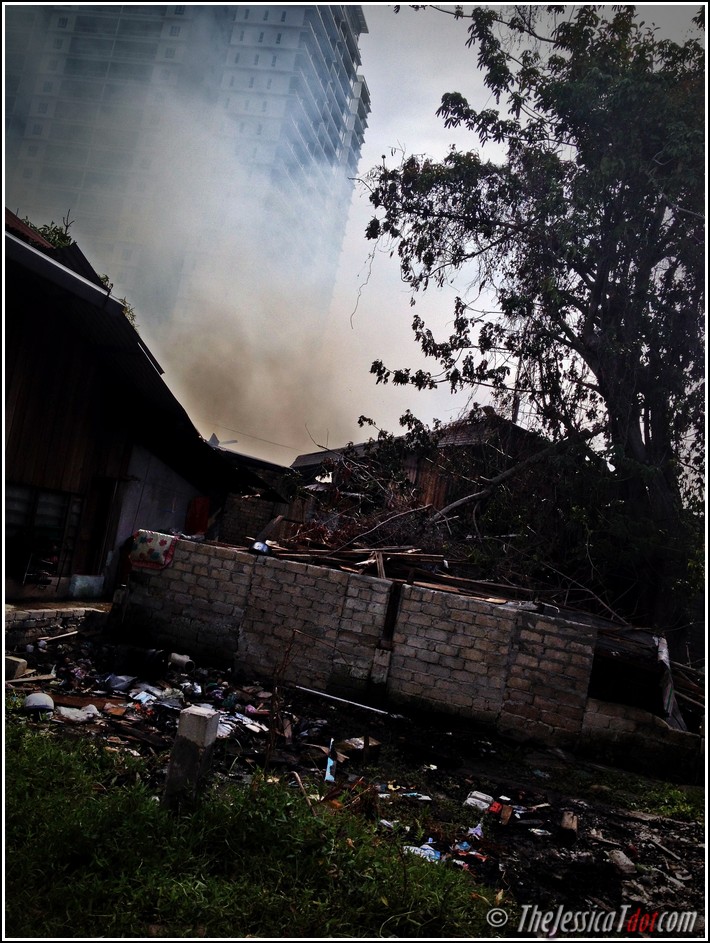 Total losses in the village are yet to be estimated.

The Fire Department, with the assistance of volunteers and villagers, extinguished the flames. 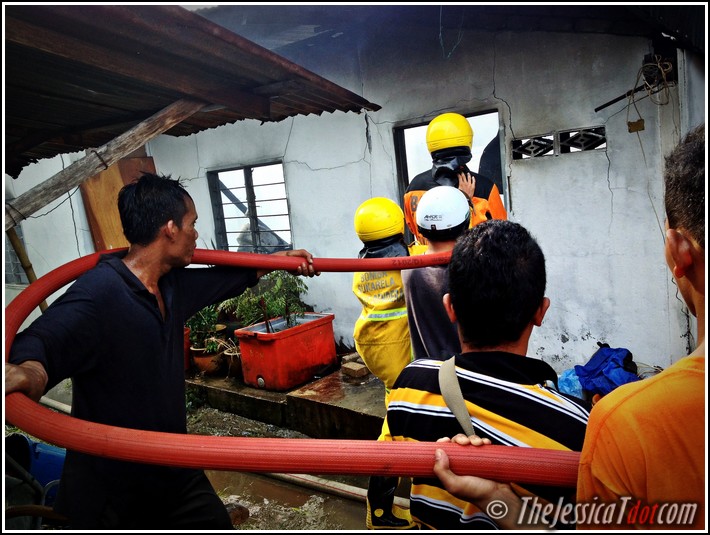 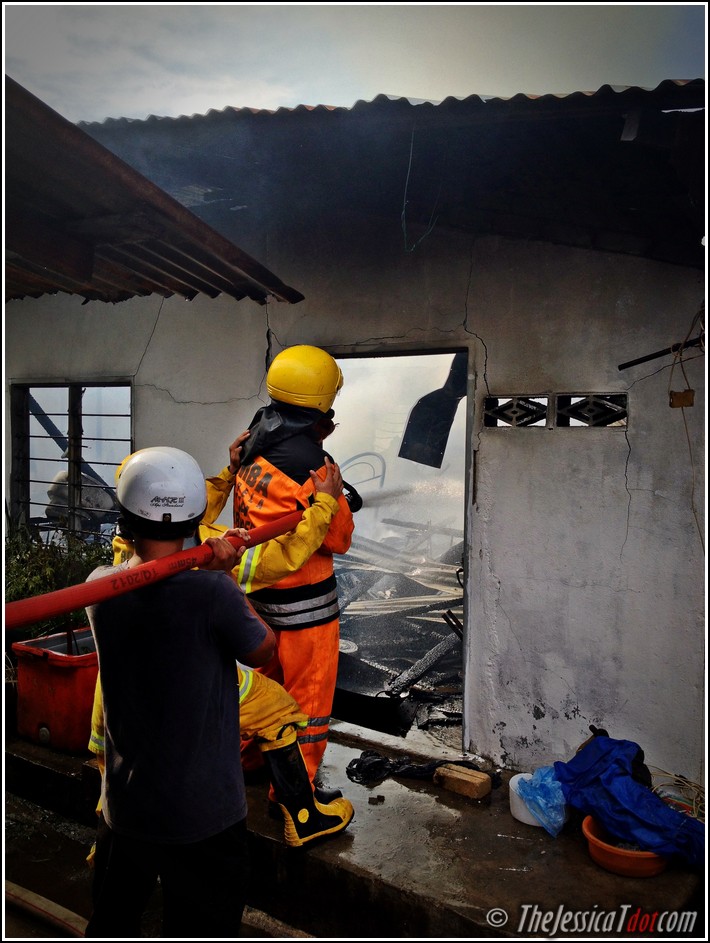 The fire lasted for approximately 2 hours and was put out entirely at 6.30pm.

The exact cause of the fire is still being determined.

At time of report, there were no casualties at the scene.

I first learnt of the tragedy upon hearing the police and fire brigade sirens, before running upstairs to my bedroom window to have a look. To my utmost shock, I could see how the sky was filled with clouds of thick smoke and was even able to smell it some 100 metres away. 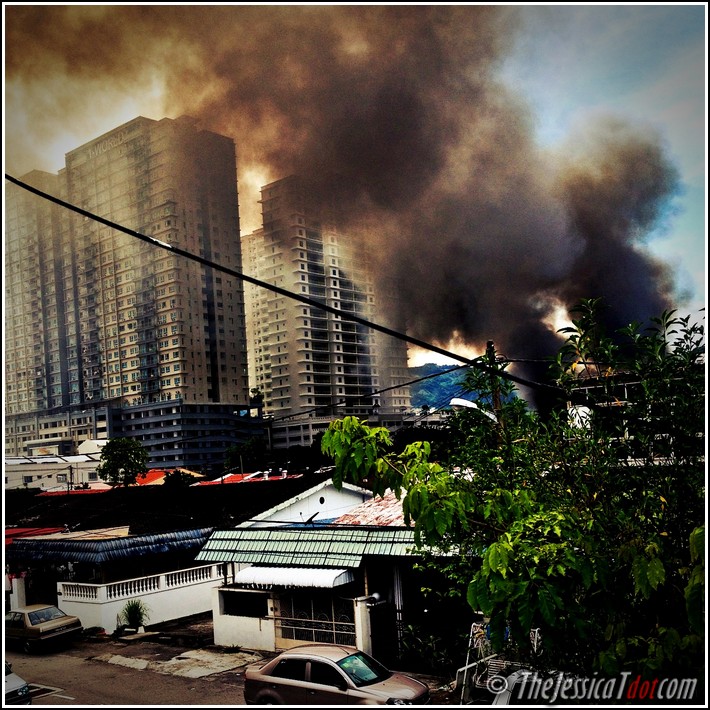 The view from my bedroom window

Wasting no time at all, I ran to the scene to report on the incident.

At the village, the intense heat was almost unbearable, and I was choking on the smoke and ash engulfing the entire vicinity. Yes, I was that close to the action and even got wet from the strong gush of water hosed out from the pipes of the fire brigade.

I could also smell faint traces of gas in certain spots of the village.

I was glad to see villagers cooperating so well with the fire-fighters in putting out the flames and assisting the police in controlling the crowd. Other villagers were seen bringing their children and the elderly out of the village grounds, to safety.

Thank goodness no one was hurt! Will be updating this space if there’s anything new.