I played a part in constructing the mean machines of Lotus Racing! | Singapore F1 Grand Prix 2010

If you've been following my blog for some time, yall would know that I was down in Singapore for the F1 Grand Prix previously

So yes yes, I've come to the end! This is the final installment of my series in this escapade 🙂 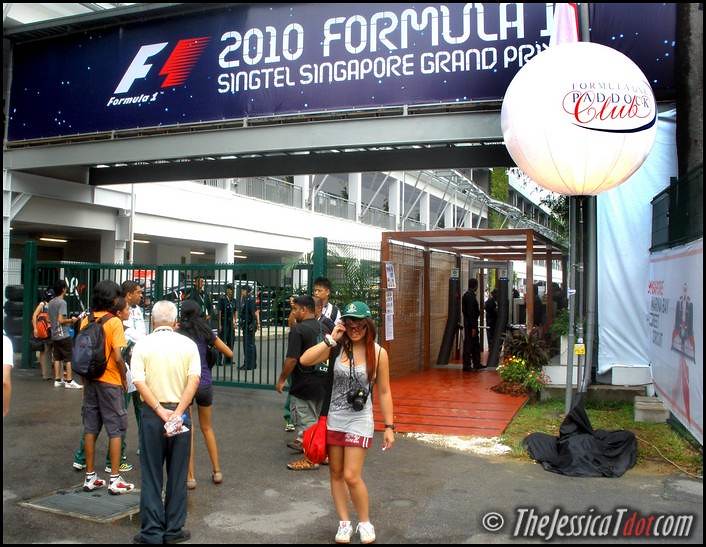 Funny how just one weekend trip conjured so many blogposts! 😀 Simply because I had so much to share and there were so many angles of the trip too! Here are all the episodes whilst in Singapore F1, in case you missed :

Top 3 champions + "tragedies" + my thoughts on the finals-  HERE 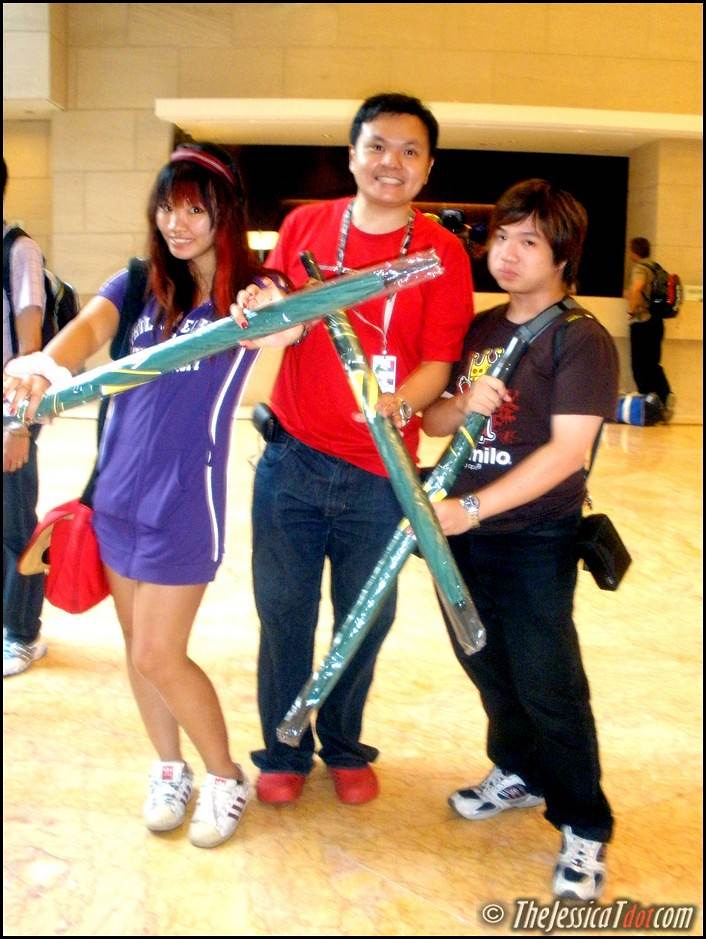 With the boys who also went on this trip, Simon & Jackie

For today, lemme share with you my morning in the Pit Stop / Paddock area.

As far as I know, it's off limits because it can be pretty dangerous once you're inside.

(oh, and lots and lots of hunky men too, if you consider that dangerous) *winks* 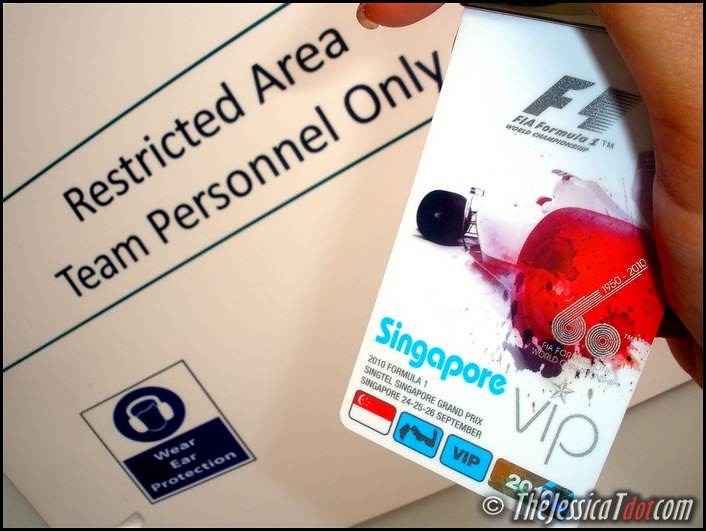 But thanks to this baby of ours, we had full access to all the restricted areas 🙂

And of course, escorted by these 2 gentlemen from Lotus Racing.

They were nice enough to show us around and bring us to meet the engineers, mechanics, technicians and whatever other profession there is to build race cars fit for the Formula One circuit. 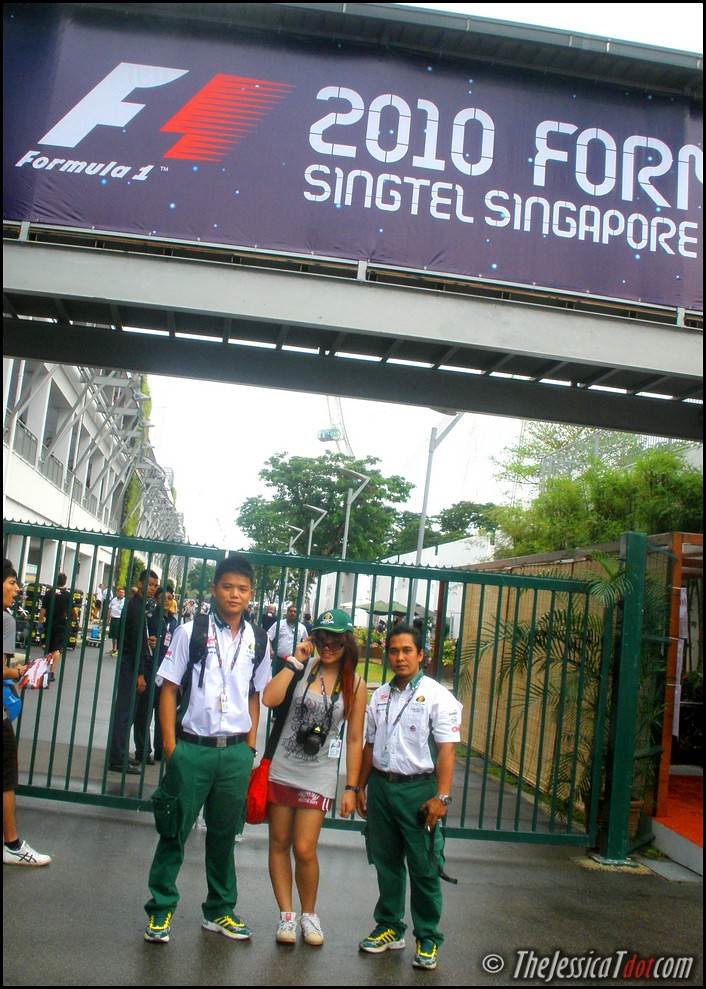 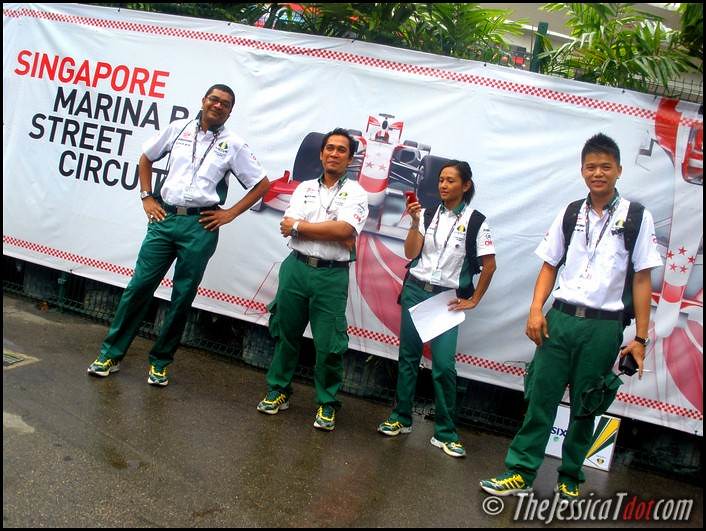 And they all have matching funkeh shoes! 😀 can't believe it's part of their uniform.

And so after passing through security – they were very adamant on body-checking, scanning and checking every single belonging of ours – we finally got into the restricted zone. The first thing I saw on my left was this – 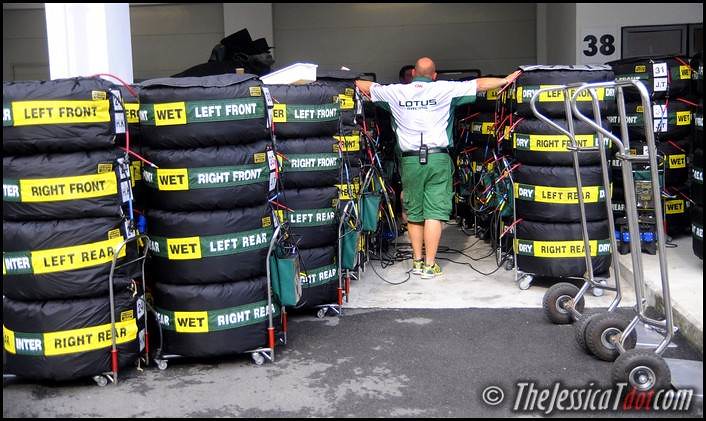 Lots and lots of tyres, all labeled! 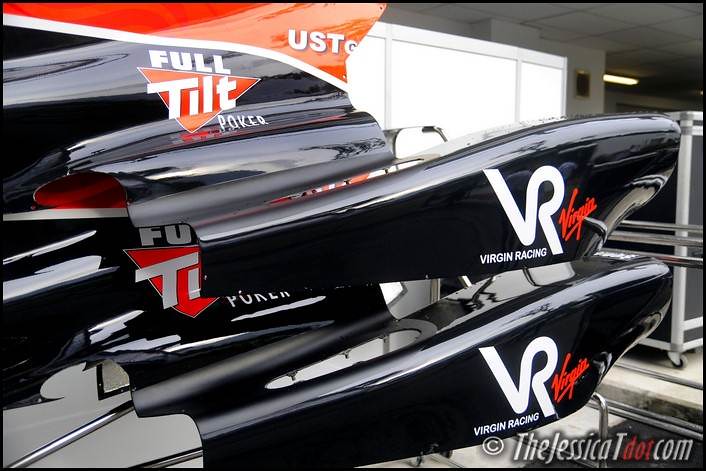 Saw a competitor's car parts too 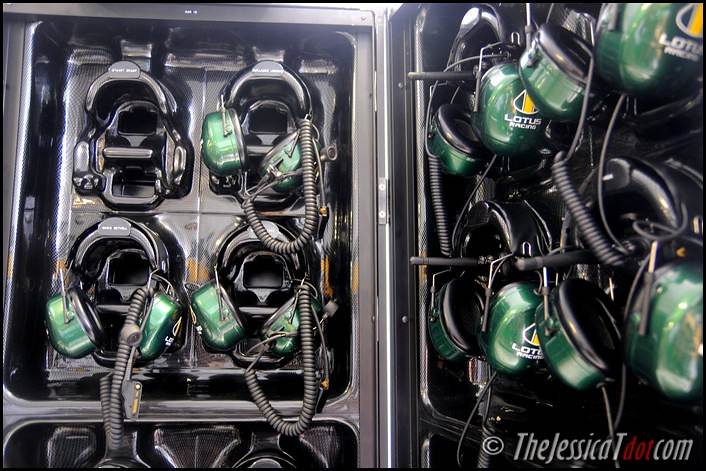 So that the person in charge can go "DRIVE FASTER U SON OF A GUN! STEP ON IT!" 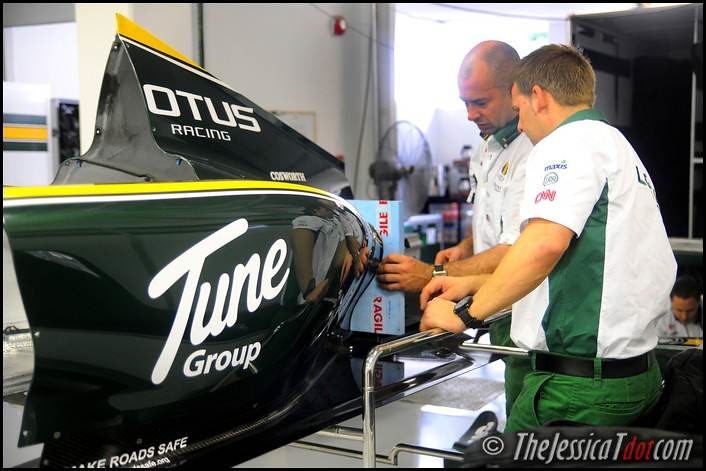 Spotted some dudes fine tuning the edges of the side wing (?) of the car 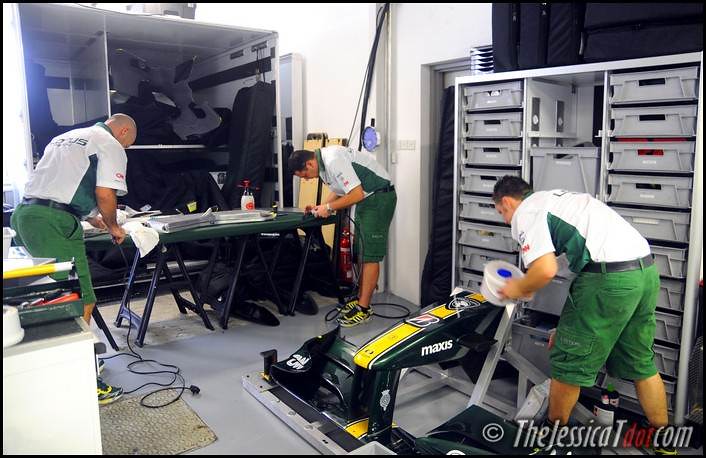 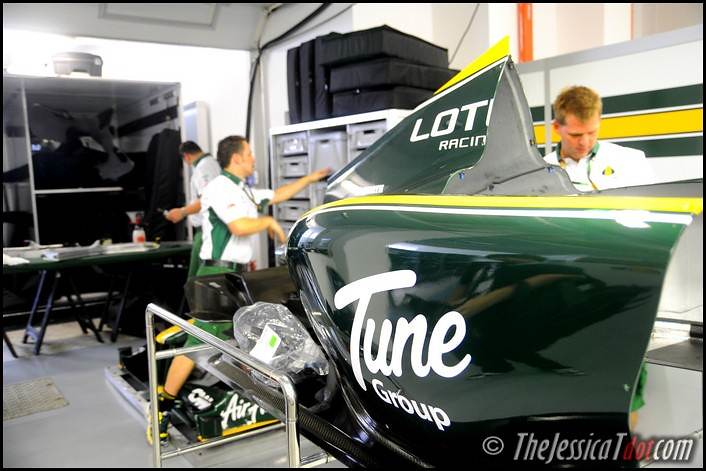 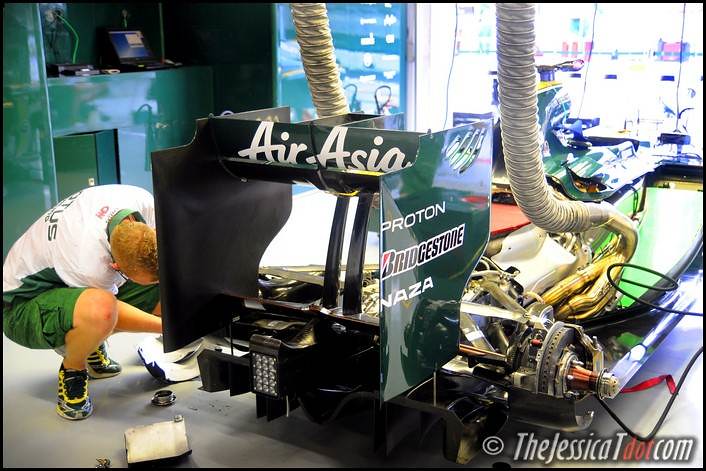 This dude was busy engineering some parts of the engine.

Hmmm.. i better not go too near him nor strike a conversation lest he gets distracted and screws a bolt too loosely or something. *gulp*

I'm not paying for any racer's insurance here! 😛 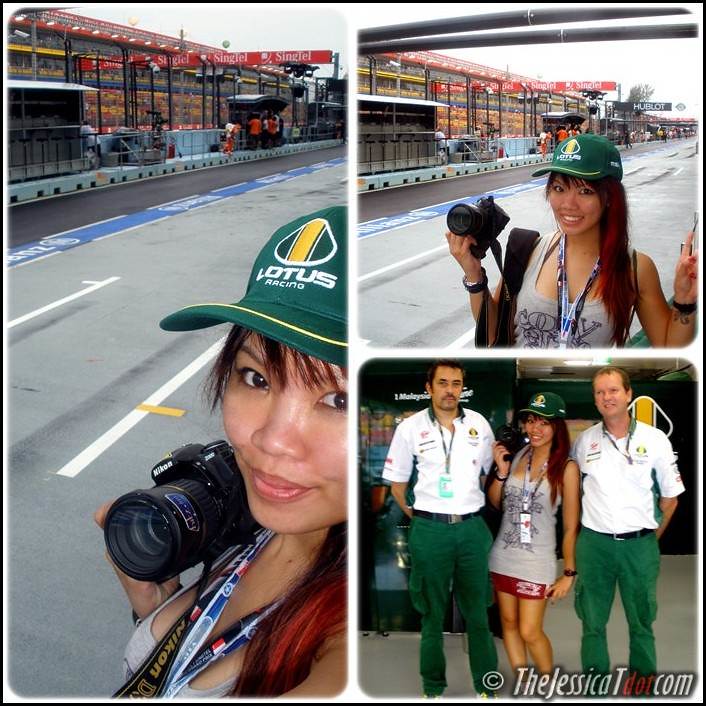 So we finally reached the light, and the end of the tunnel of pure seriousness and concentration. It was beginning to get rather tense in there 🙂 Here's the Pit Stop where the speed demons pull over during a race either for refuelling, new tyres, repairs and other mechanical adjustments 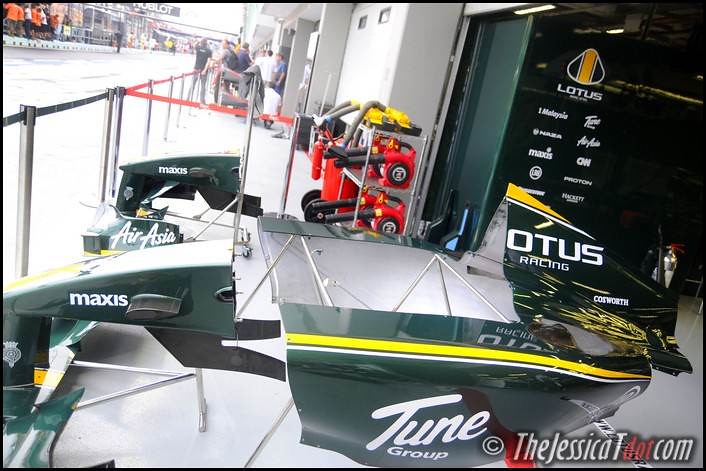 But now, it's filled with car body parts!!

After so much observation, here's where the kick comes in *biggrin*

One of the car engineers sensed my enthusiasm and curiosity…. and asked if if I would like to help!

Of course I would LOVE TO HELP!

But oh well, my hopes and dreams of getting myself dirty, fixing together a majorly important part of the race car and crawling under a race car with beads of sweat running down my forehead kinda backfired.

I'm not telling you what I helped out at! 😛 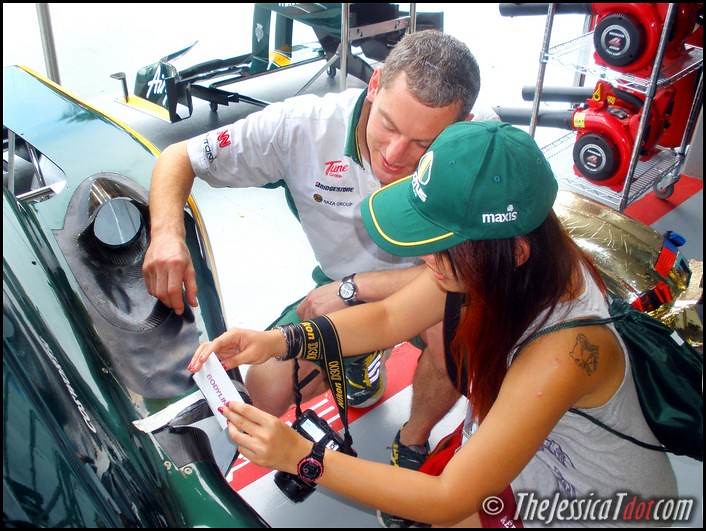 On a random note, why do the Brit and American car engineers ALL look so smart, hunky, immaculate and effortlessly suave?

They look like they could've easily finished a calendar shoot.

Plus, they are all tall, dark and handsome as opposed to the dirty, messy, smelly, smeared with grime and engine oils, having disgusting patches of sweat on their chest and underarms like the *majority* of mechanics here in Malaysia.

OR IF YOU ARE ONE YOURSELF! 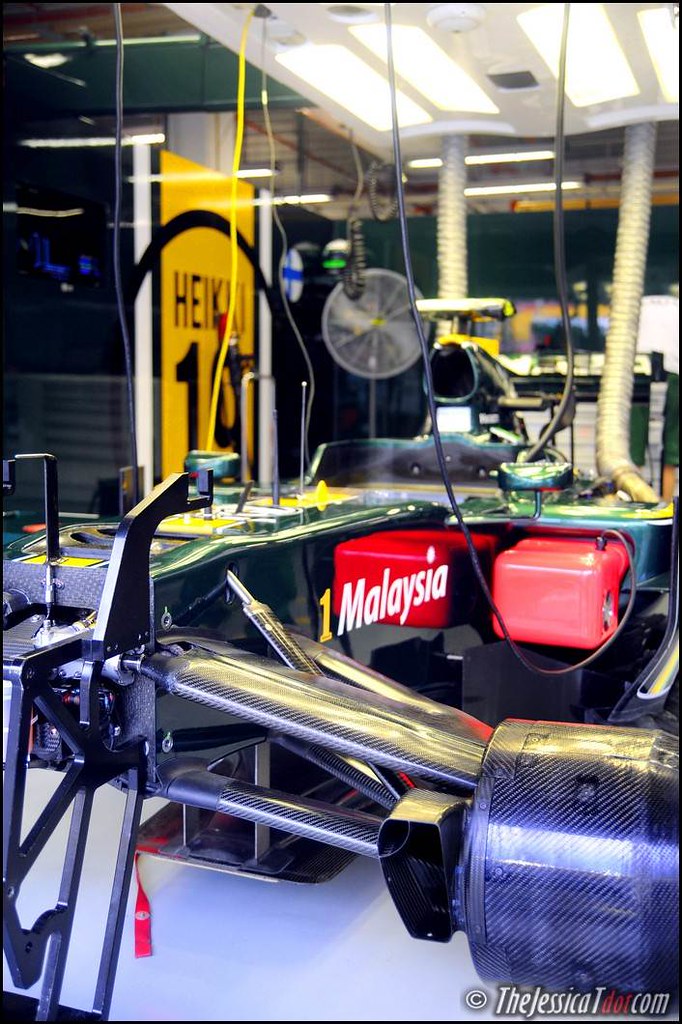 So! *dusts shoulders* I played a part in the making of this sexy mean machine!

Okay lah, I'll tell you what I helped out with. Promise you won't laugh or jeer at me nor my tiny efforts.

I only helped with painting the corners of the car with gloss paint. *runs away*

But hey! It's QUITE important too, come to think of it. You wouldn't wanna see an ugly coloured race car right? 😛 Neither would you wanna see a race car with patches of messy paintwork. 😛 😛

But I implore you to play along for my sake! Nyahaha 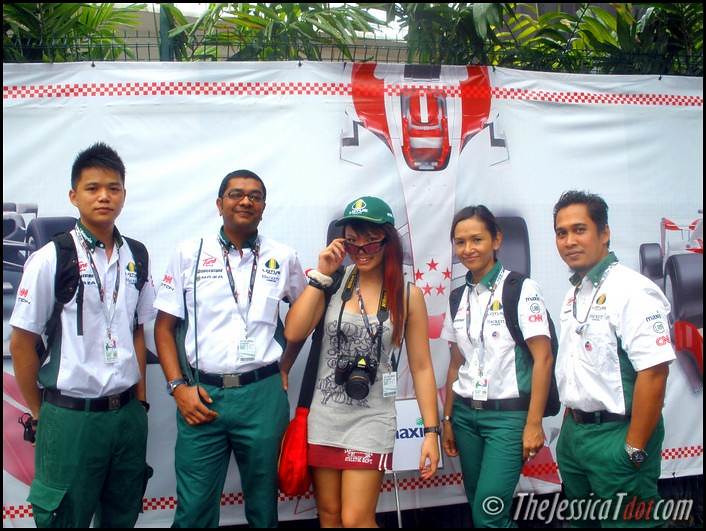 Thank you for making me feel important in the race for one second.

So whenever I see Lotus Racing's car whizz past, I can at least manage a tiny

Haha enough of the nonsensical imagination. You must've thought I wrote this piece on crack or that I've turned into a delusional nutcase as we speak. In fact, I've just accidentally added a tablespoon of bitter black coffee into my Milo and now struggling to finish the entire damned mug. 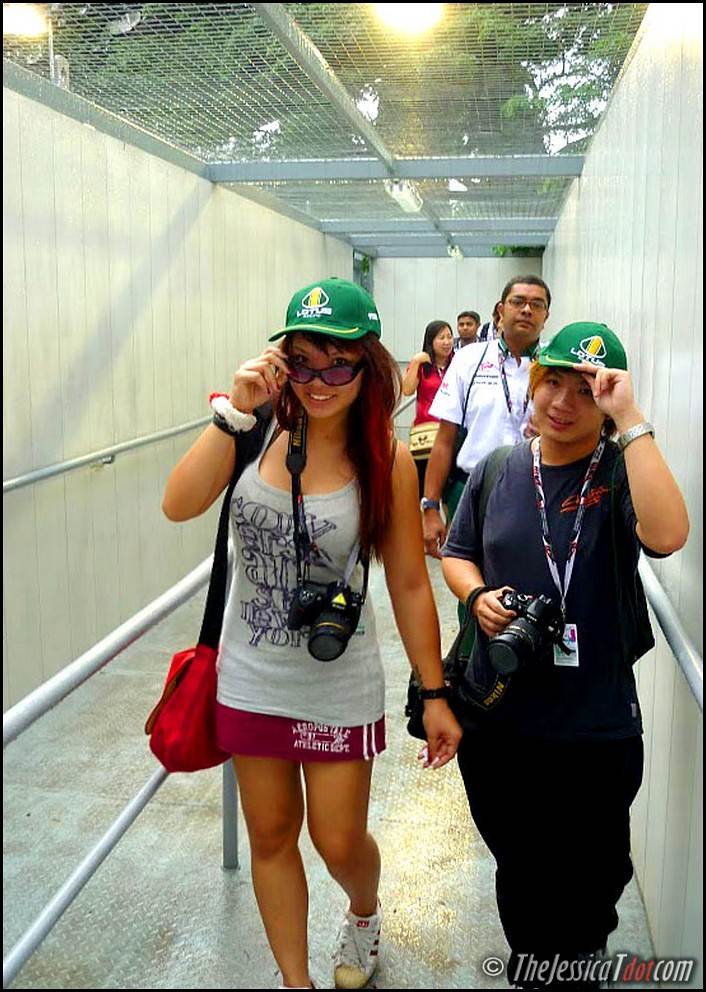 It was fab while it lasted.