So I asked myself… When was the last time I ever had fun in a themepark?

Only to realize that the last time wasn't that long ago.

Remember when I was at Genting Highlands' outdoor themepark with the homies? That was tonnes of fun!

So naturally, I was rather eggcited when Nuffnang invited me along to join a day out with them on a sunny Sunday morning 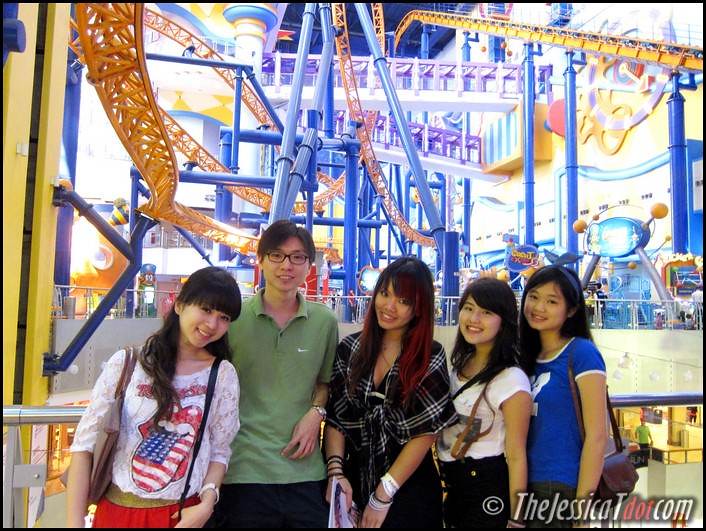 Be prepared for the adrenalin rush!! 😀

However, it was more than I could take at one point. I could literally feel my ass being thrown out of the seat, while clutching on to the metal bar as tightly as I can, hanging on to dear life!!!

But hey, it's all part of the good fun ain't it? 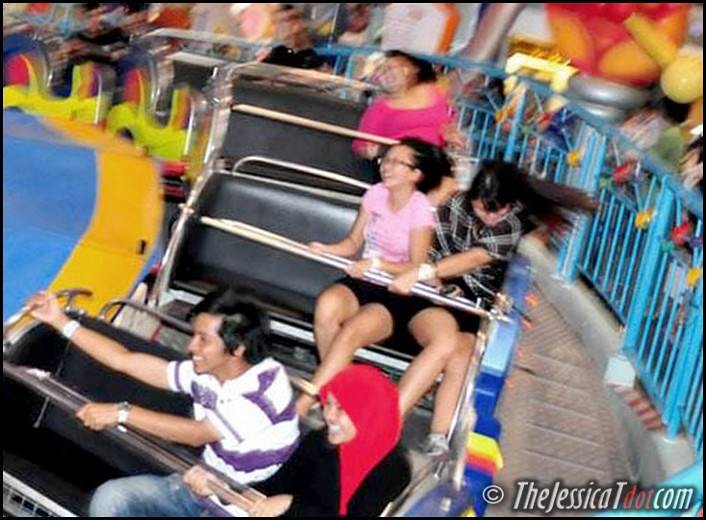 God knows what speed I was spinning at, but it sure had me feeling a little woozy and seeing stars thereafter

Oh and if you were wondering why I'm dressed like that to a themepark, it's because I wasn't home since yesterday.

Was at the 7aste Monte Carlo event the night before (as you can see from the same outfit) and bunked over at a friend's place after a houseparty. Felt so inappropriately dressed to a themepark full of physical activities!

Thankfully, I had a pair of sneakers in my car. 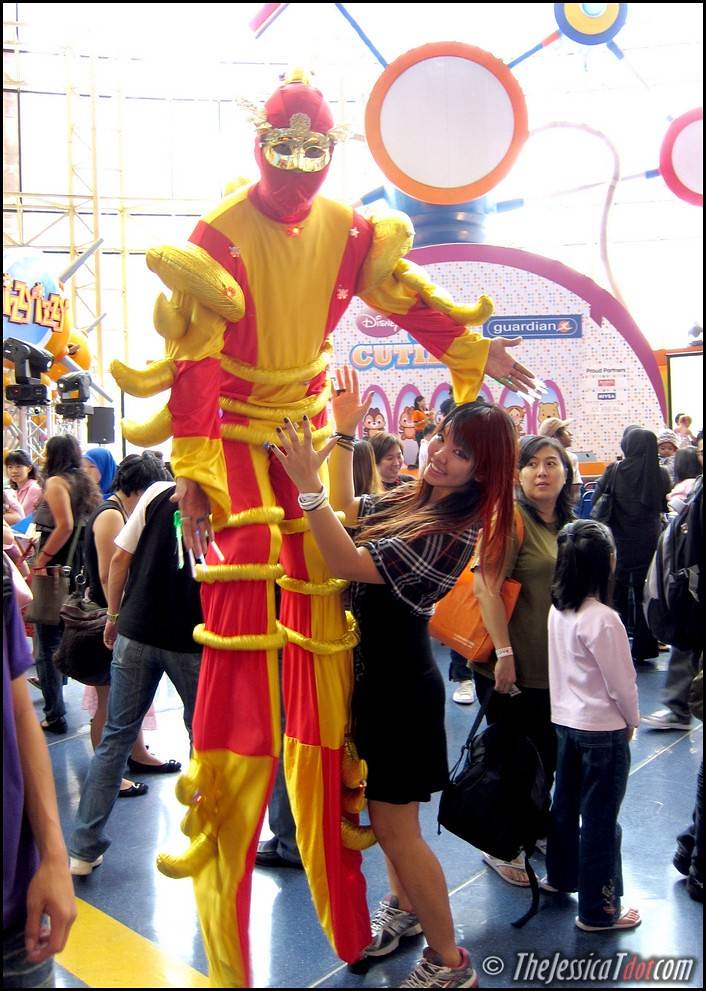 Random shot with a random Ironman on stilts

I hardly ever get a chance to feel short and tiny when I'm out with my peers but taking photos with these tall men allowed to to somewhat feel midget-ish for a second. Remember these massively tall dudes when I was down in Singapore for Formula One? 😀

They were double my height!

Riding carousels and merry-go-rounds makes me feel like a child again, really. Especially colourful ones!

I picked this rather strange-looking seahorse 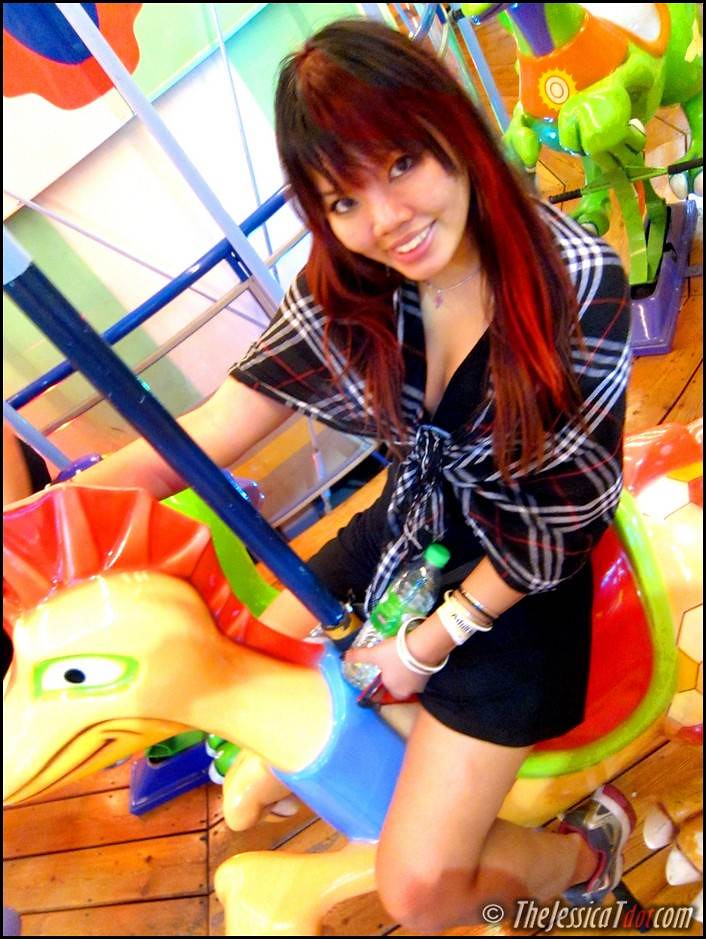 Don't know why but I look uberweird in this photo

🙁 Perhaps it's the distortion. heh 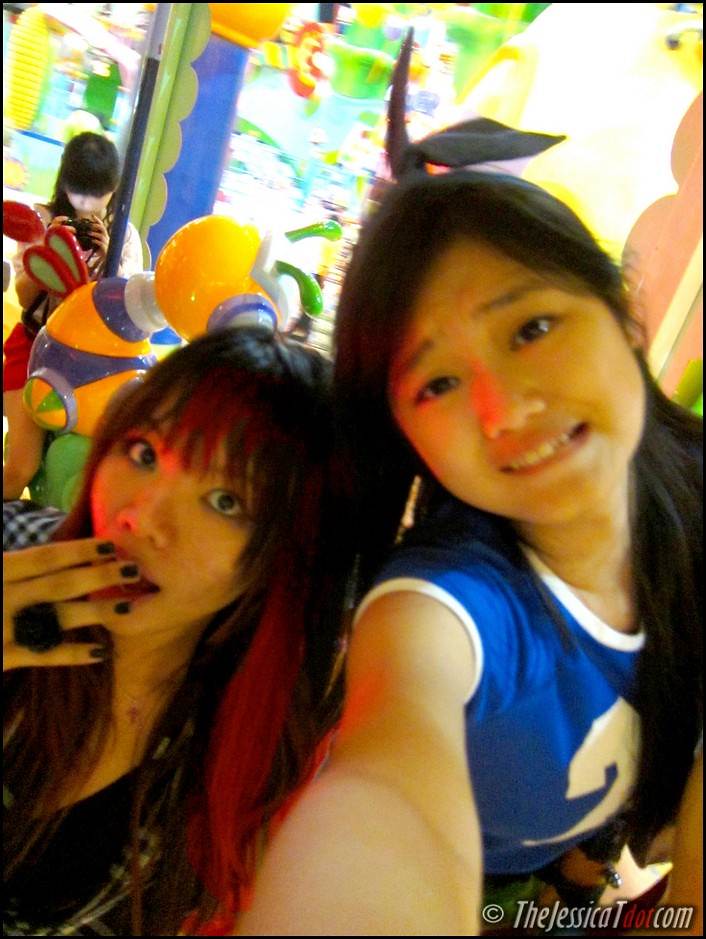 Didn't take long for it to start! Natalie and I had such fun making silly faces along the way.

Thanks for all the pics in this post, gurl

All of us then proceeded to more rides… 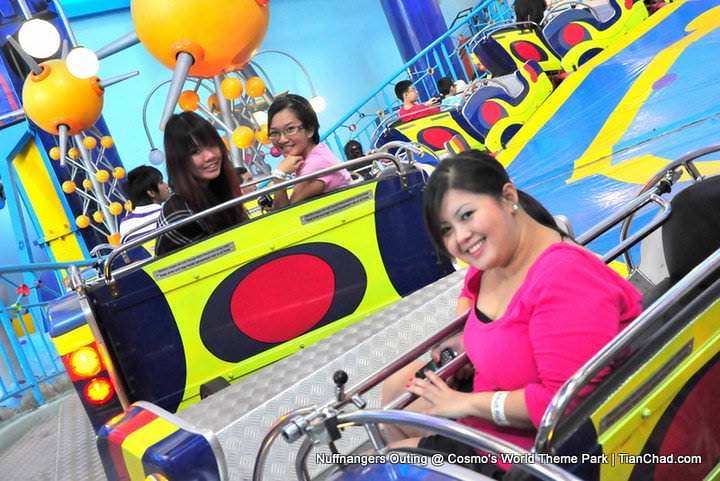 I bet everyone's arms and legs were sore for the following days after today! 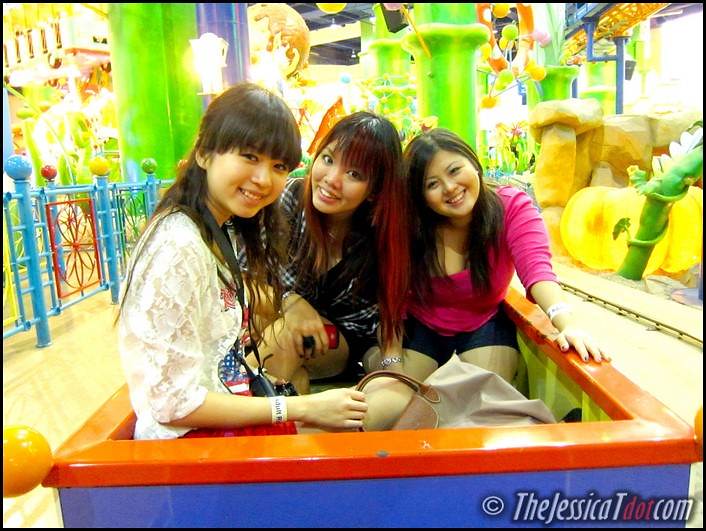 Went on the train ride which toured the entire Cosmo's World

It was pretty fun as we got to see the whole place in one ride! 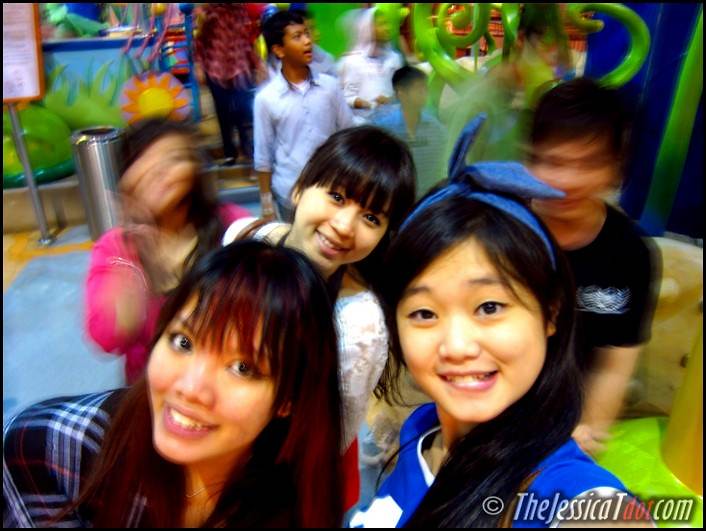 Like eggcited little children after a choo-choo train ride

There is a child in everyone! I don't see anything wrong with embracing that inner child in us

Actually, we didn't ONLY go on kiddy rides. All of us sat on much, much more aggressive rides than these chilling ones, but no cameras were allowed up there. See the rail tracks of the rollercoaster below? *gulps* 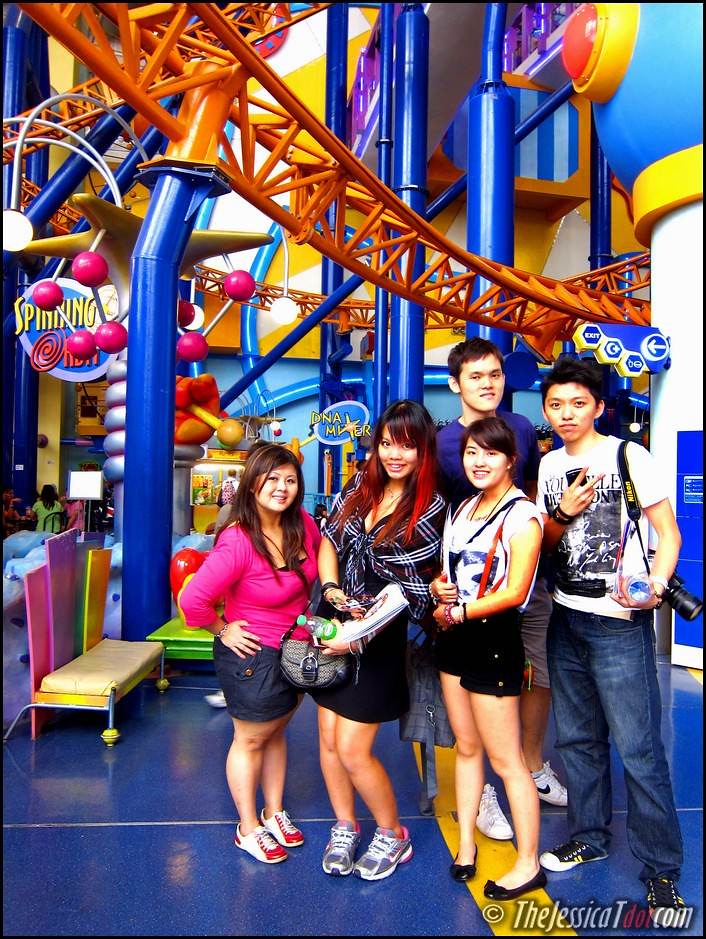 Although that would be quite a sight to see! Hee. 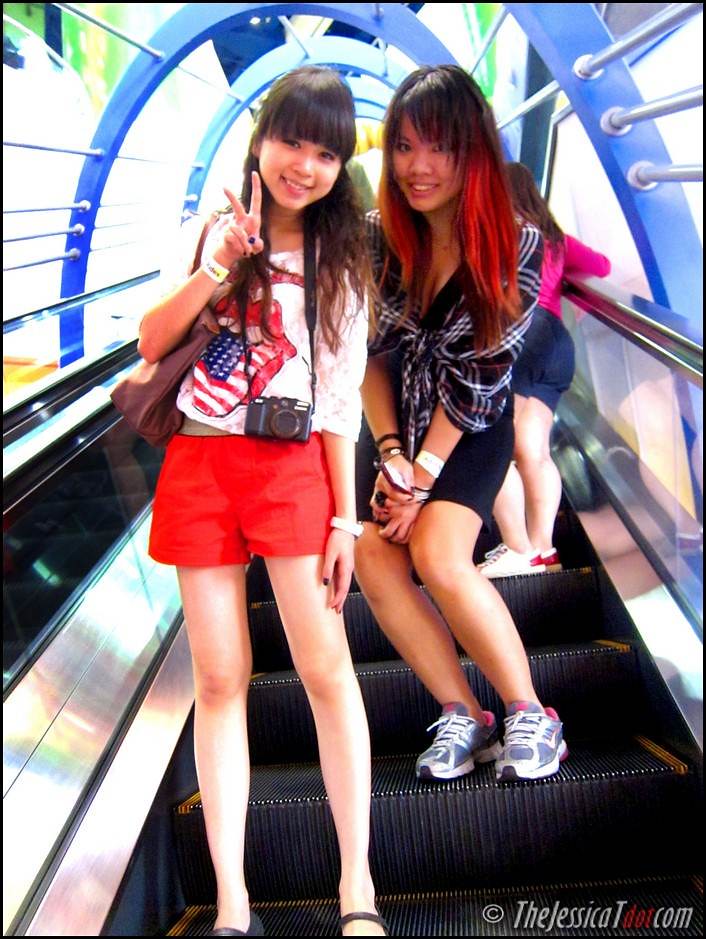 I love this zone, for they had Bumper Cars!!!

This is the only time I FINALLY get to be the speed demon I am, make illegal turnings,drive on the wrong direction, be a road bully, park everywhere I please and hit other drivers without getting into the long arm of the law! 😛 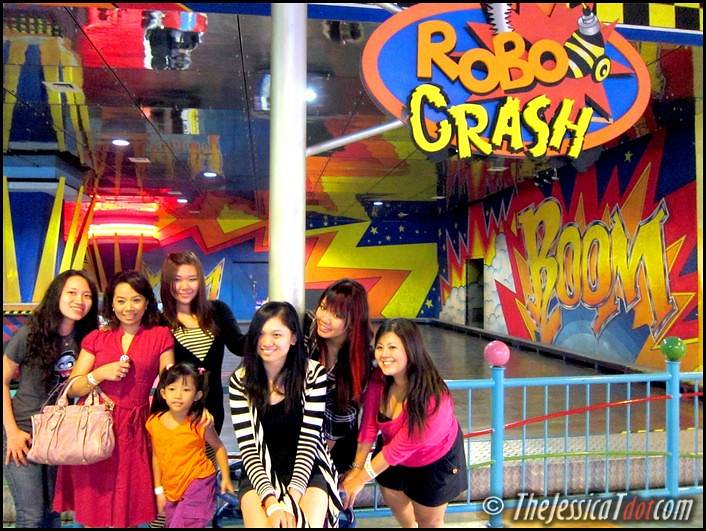 Thank you Robo Crash for making us all feel like road criminals for 10 minutes!

Had fun crashing into XinXian, Kak Mira and her kid, Michelle, Karen and the other Jess (in pink)

So my Saturday morning ended pretty swell, thanks to a fun-filled outing!

I reckon this is was the reason why I'm actually awake so early on a Saturday morning. Also, had good day shopping at Chic Pop fashion bazaar in the afternoon 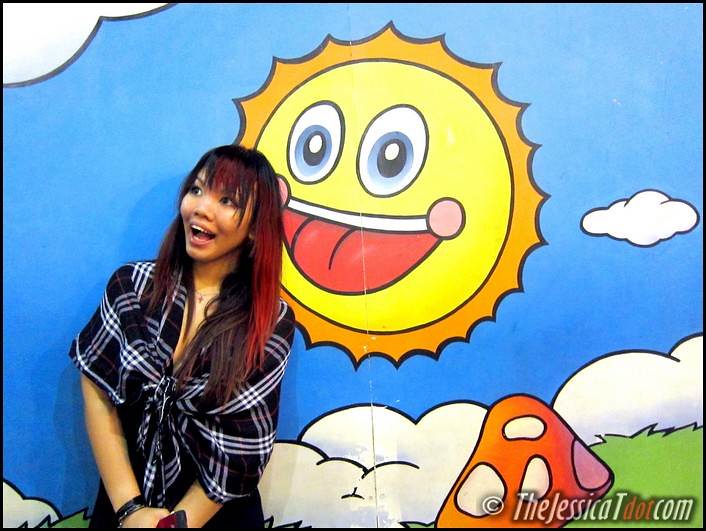 That kept me a happy little girl throughout the day