Heyloooooo!!! After all the exhaustion, sweat and raving all night in a sea of people, I'm FINALLY home!

😀 The crowd was massive! It was so tough to move about when I was making my exit 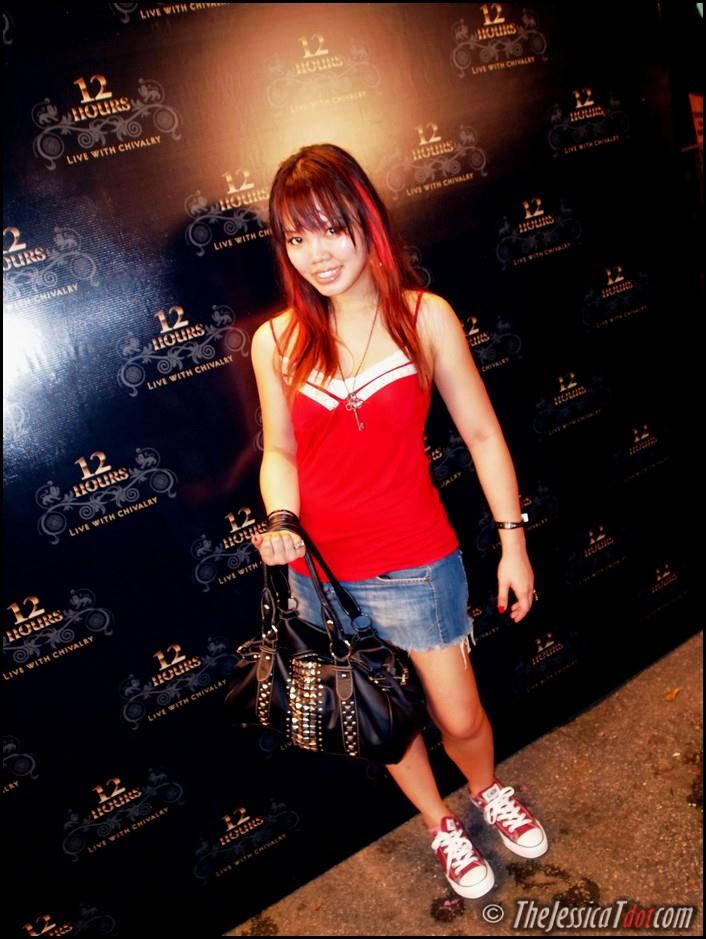 But 1st, a compulsory shot at the photo wall! 😀

Don't worry, this is not a preview post of any sort. 😀 It's the real thang!

Courtesy of Chivas and Martensia for the invites, I had the opportunity to catch 12 Hours tonight on the 15 May 2010! But who would go to a concert alone ey? I brought along buddy Erin too. Let's get ready to roll babe 😀 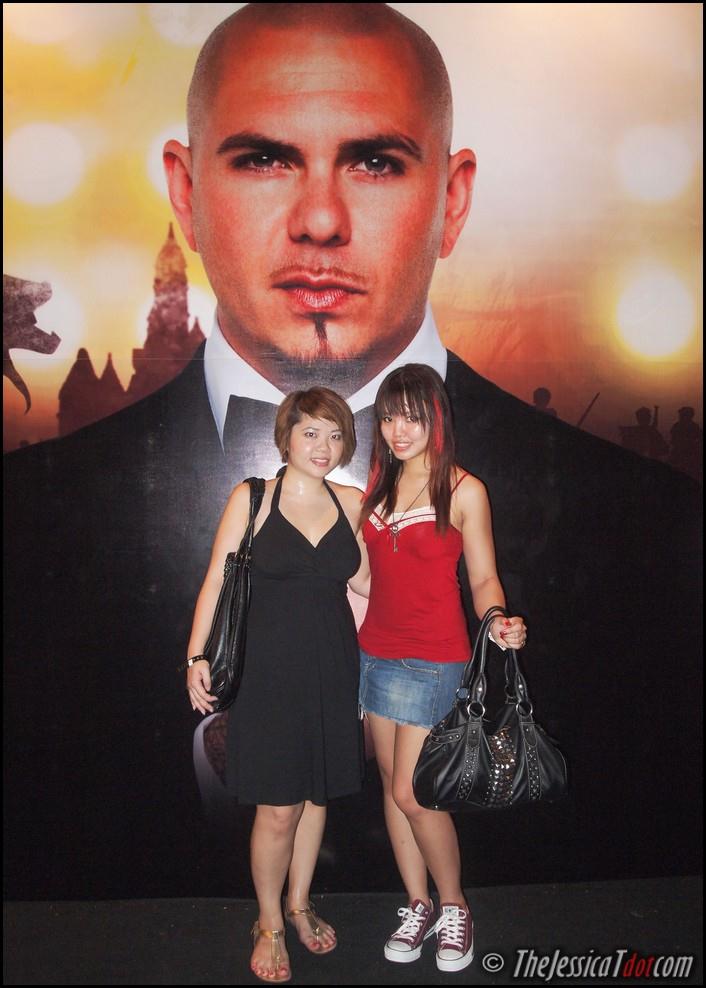 So we got in when it was still early (to avoid the carpark gridlock and thronging through crowds of people) and was one of the 1st few hundreds who reached Bukit Kiara Indoor Arena. So this is it! Party like it's 12 hours!

12 Hours Live with Chivalry features a stellar line-up of fave hot acts of its genre. So get ready to be transcend dance music boundaries with R&B, House, Trance and Electro! 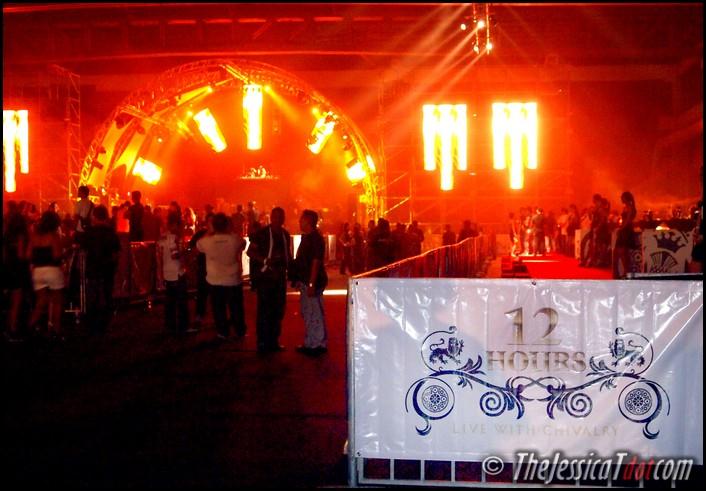 As usual, they were fab!

After a while, the 1st star of the night, Roger Shah took over the DJ console and worked his magic fingers on not only the decks but his signature keyboard as well. He was really good and made lotsa interaction with his fans below 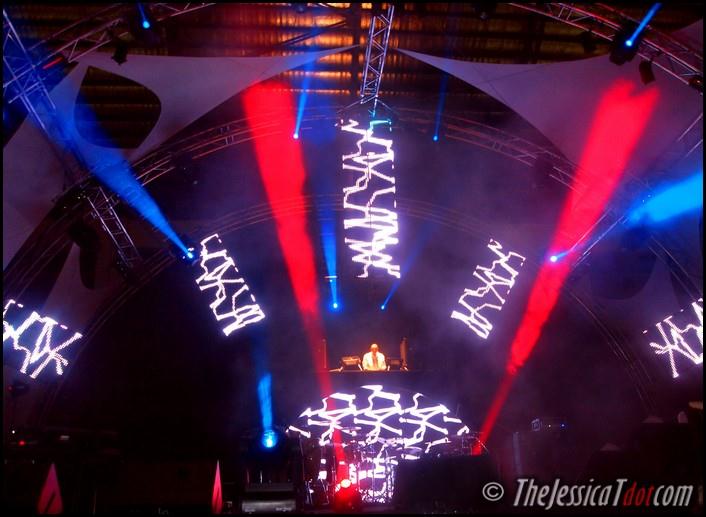 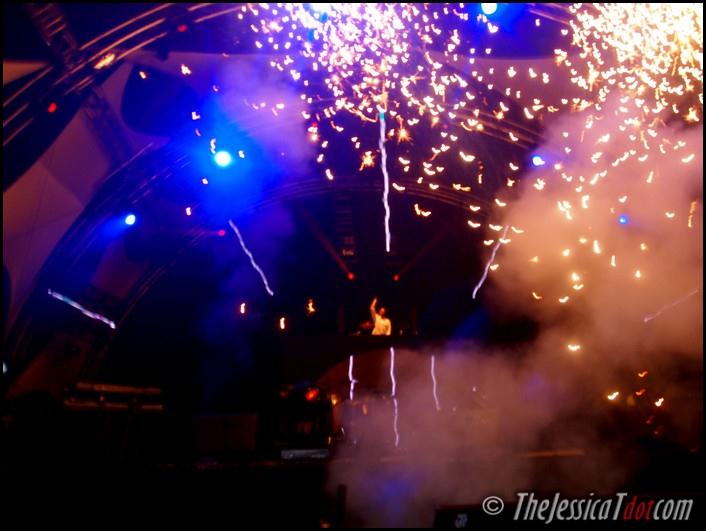 Throughout the entire concert, there were lotsa "explosions" of flames and sparks 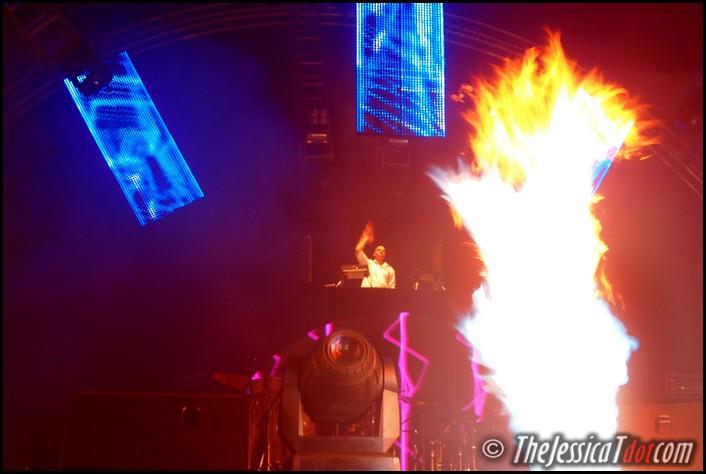 and giant blasts of flames too

His keyboard is adorable! It's half the size of an ordinary keyboard. 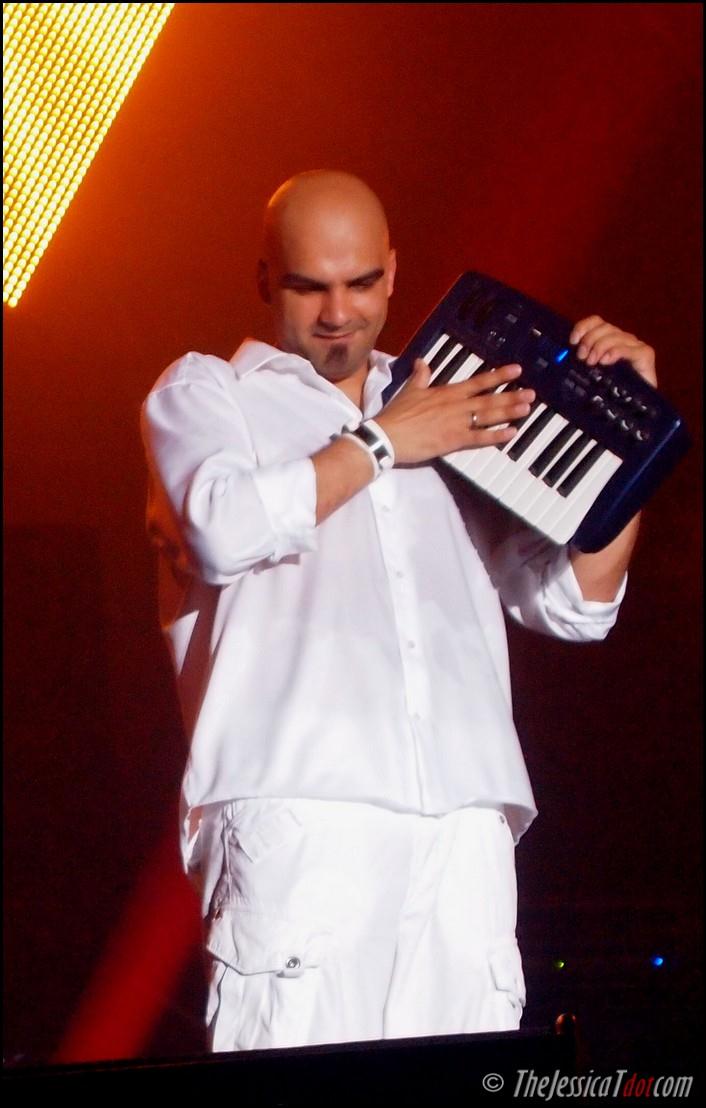 Wearing white from top-to-toe, this is Roger Shah our Trance superstar all over

More pictures of him 😀 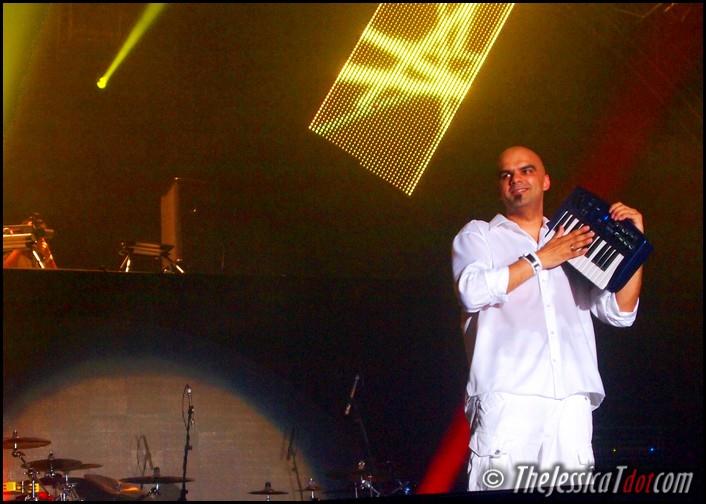 Aside from all his awesomeness and crowd appeal. Many of us didn't buy the heart symbol he keeps asking us to do. Kinda full of himself, much?  It was total overkill! I think he did it for a total of 7 times in 2 hours. 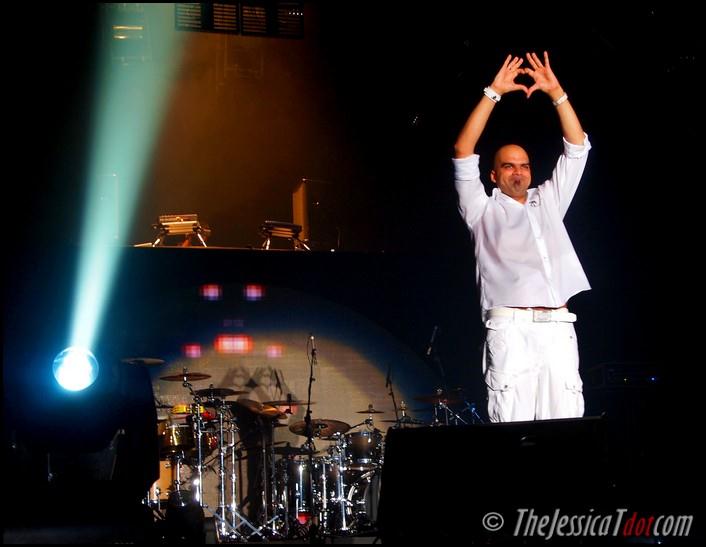 Okay, final hearts for you before we move on 🙂

You know how they always put the main star of the night as the last one to go upstage? Well.. I was prepared to wait until 3AM just to see Pitbull live in action, in the flesh! 😀 What can I say? I'm a huge fan of Pitbull, I began my clubbing days with Pitbull (and some Timbaland) and I know I would travel far and wide just to see him in real life partying on hard with his music.

But I didn't have to – because he's here. He's finally here making his debut performance in Malaysia!! 😀 😀 😀 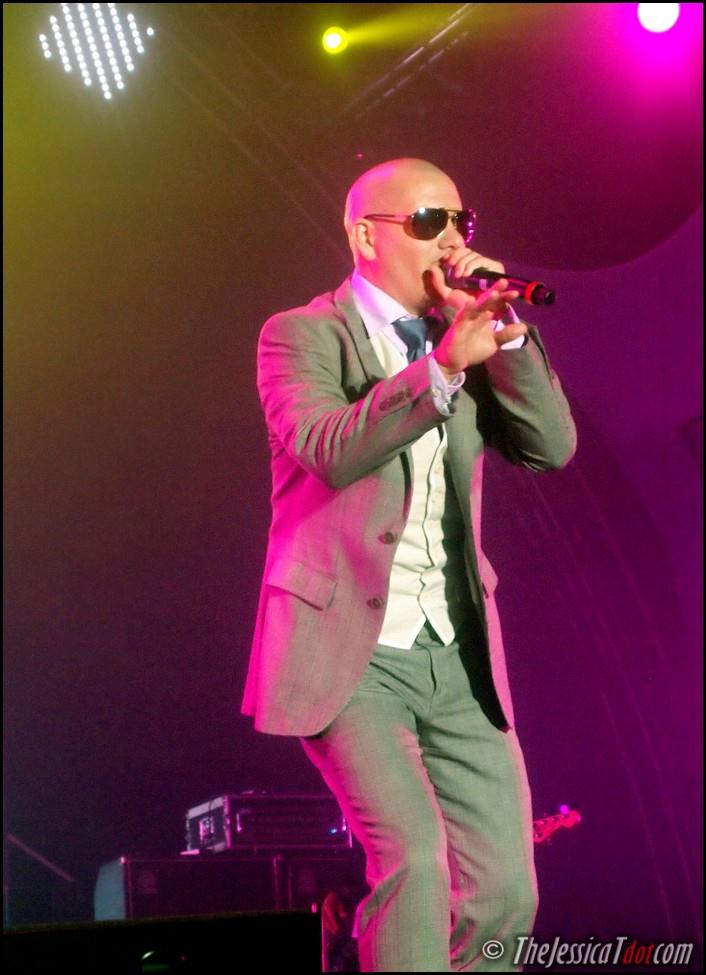 NOT AS THE LAST ACT OF THE NIGHT, BUT NOW! NOW NOW NOW!

His entrance was more than grand. It was impressively magnificent. Dramatic too! All his music and remixes were being played and we all knew this was imminent of his celebrated arrival. When he *finally* arrived on stage, the crowd threw an insane roar of cheers!

Plus, the flame explosions and mist made it all the more amazing 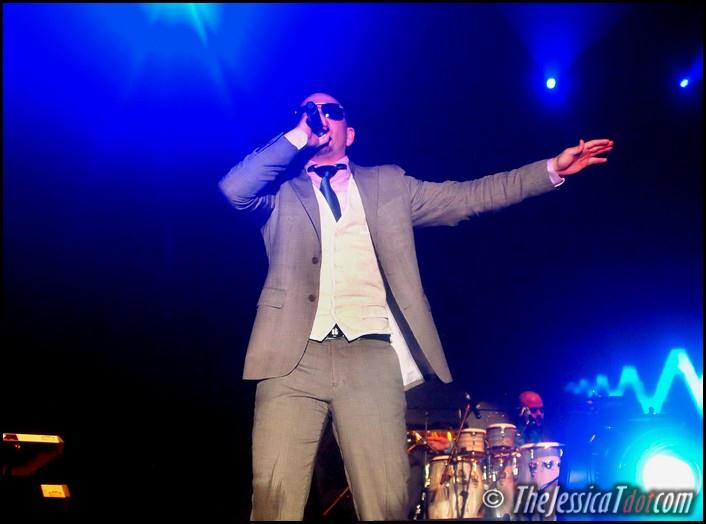 He kick-started his performance with lotsa favorite tracks from his latest album Rebelution, such as 'Blanco', 'I Know You Want Me', 'Culo', 'Shut It Down', 'Hotel Room Sevice', 'Krazy', 'Across the World' and so much more!

Oh and, he can jiggy really really well too! In fact, I think all Spanish people can. Totally loved the way he swayed along with us and shuffled his feet while busting out hardcore moves from his crotch area. LOL. But it's all part of the fun, most girls cheered him on when he did that! 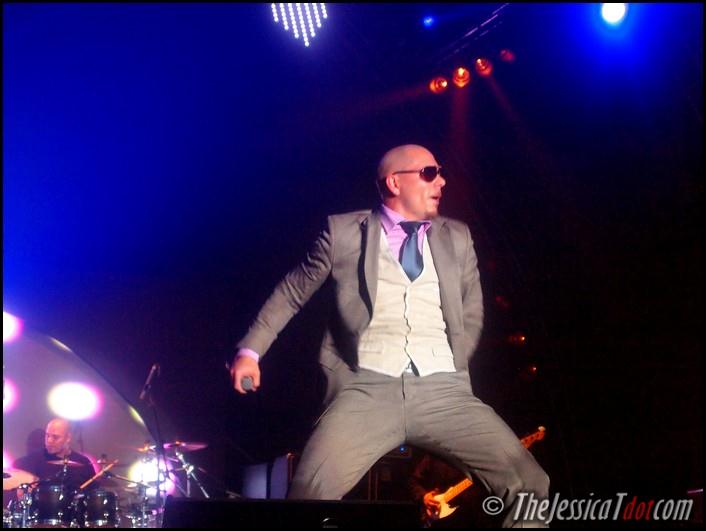 This was him performing 'Blanco'

I've got lotsa videos for you too! 😀 Gimme till tomorrow to upload them here okay? It's in full HD that's why it needs to take a while 🙂 Anyways, the bass was so powerful that I think it messed up the audio bit.

But nevermind okay! It's worth watching him performing with full of energy, dancing, jumping and driving the crowd wild 😀 😀 So stay tuned till tomorrow for the videos 😀 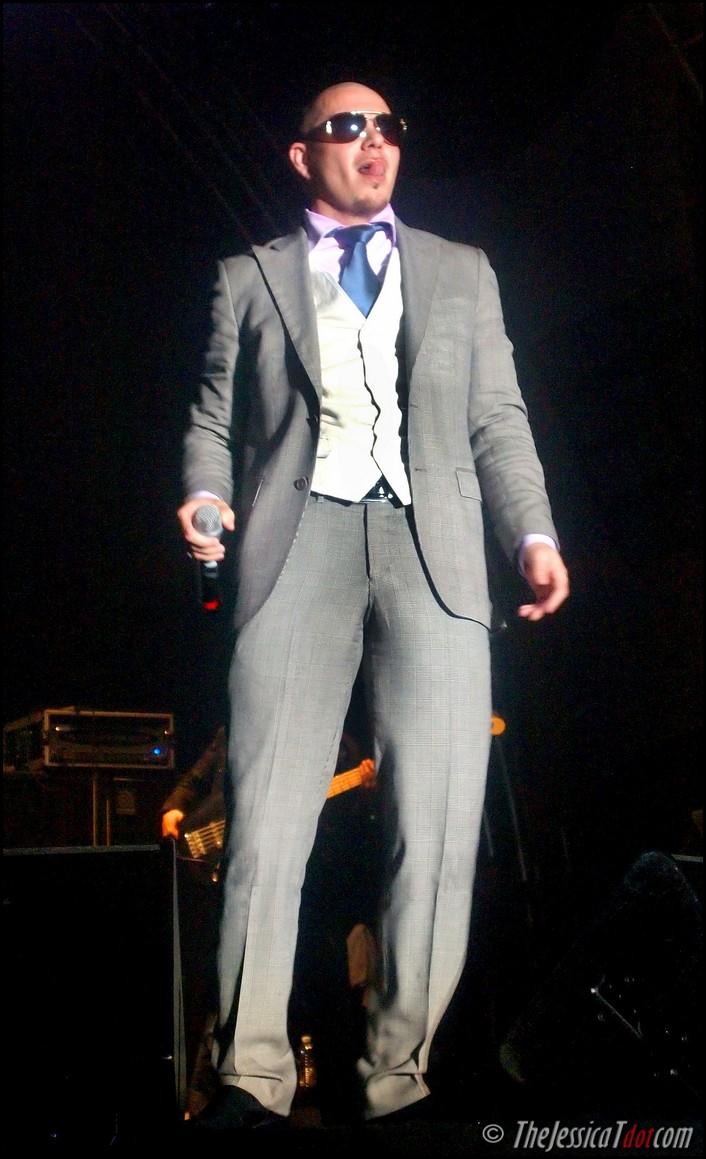 Straight out of Miami, Mr. 305 is here standing before you looking all immaculately dressed as usual

Now watch him strip bit by bit off his coat, vest, necktie and shirt to drive the crowd in a frenzy 😛 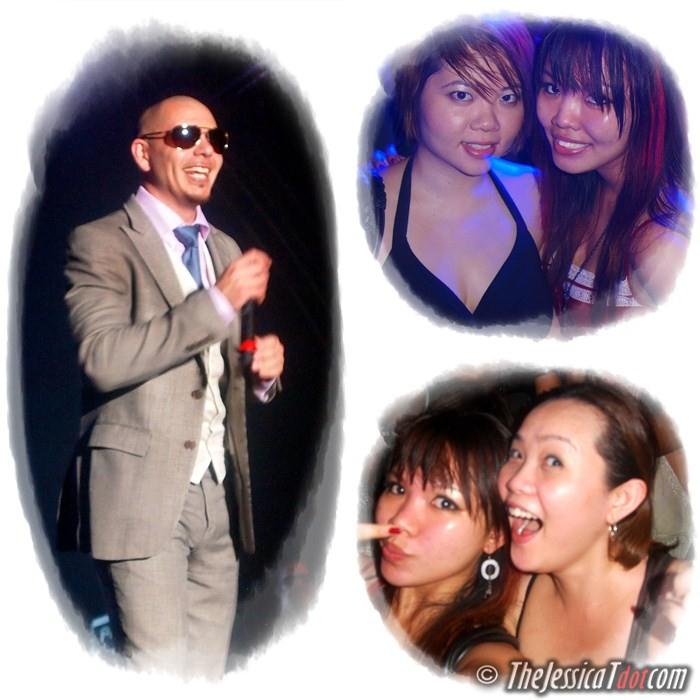 Heck, even the crowd was dripping with sweat!

I bet you're boiling inside there with 4 layers and long sleeves too, huh Pitbull? 😀

This is prolly the closest I could get IN THE SAME photo with Pitbull, my R&B hero!! 😀 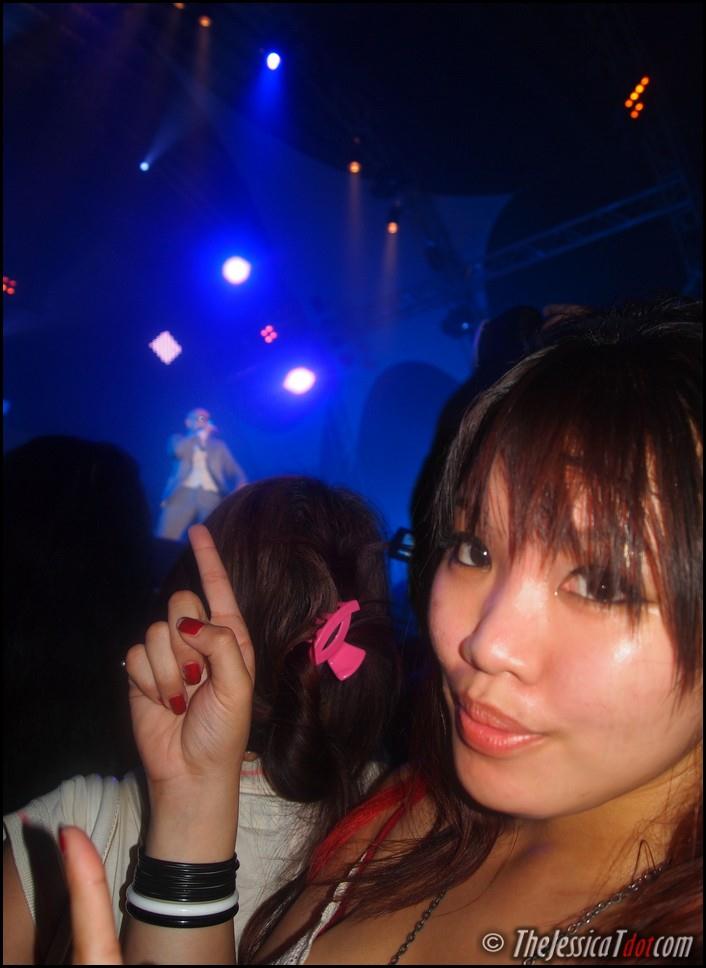 Ignore my finger, it looks really wrong on all levels!

When he (finally) stripped down to something more cooling, we could all see his tattoo laden muscular arms. Okay, perhaps not as muscular as Akon during his Freedom Beach concert Live in Malaysia which I've blogged about last December. But still hot nonetheless! 😀

Ya know what was really hot? When he performed his 'Hotel Room Service' and 'Krazy' for us all. 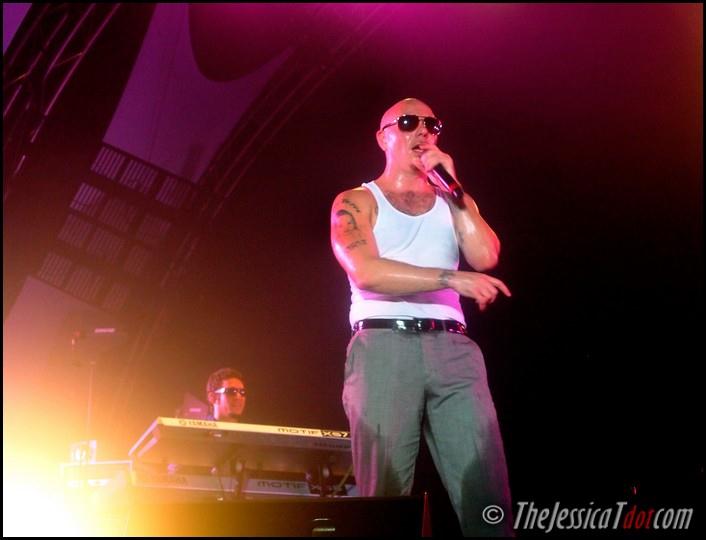 But dear Mr. 305, why didja wear your shades throughout the whole concert?

You have really ravishing eyes ya know, we all could see from your huge-ass poster outside the arena

Await the videos of his 'I Know You Want Me', his 'Krazy' performance and 'Hotel Room Service' yeah? 😀 It's really bursting with energy

You KNOW we want you Pitbullllllll!!!!! My feet and Erin's were aching like hell from all that jumping and dancing but it was worth seeing Pitbull all the same! *teary eyes* 😀 Glad you could come and share the fun with me babe! 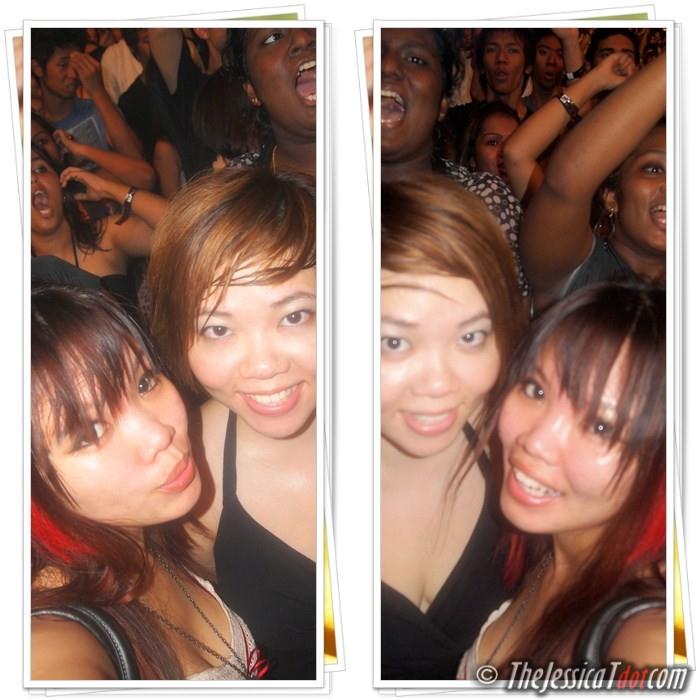 It was a rave concert after all 🙂

Oh and ya know what? He yelled on stage "ONE LOVE, ONE HEART, ONE MALAYSIAAAAAA!!" O_o Whoa. Talk about the research he and his team did about Malaysia! One Malaysia pun keluar! Najib would be proud LOL 😀 not bad Pitbull! 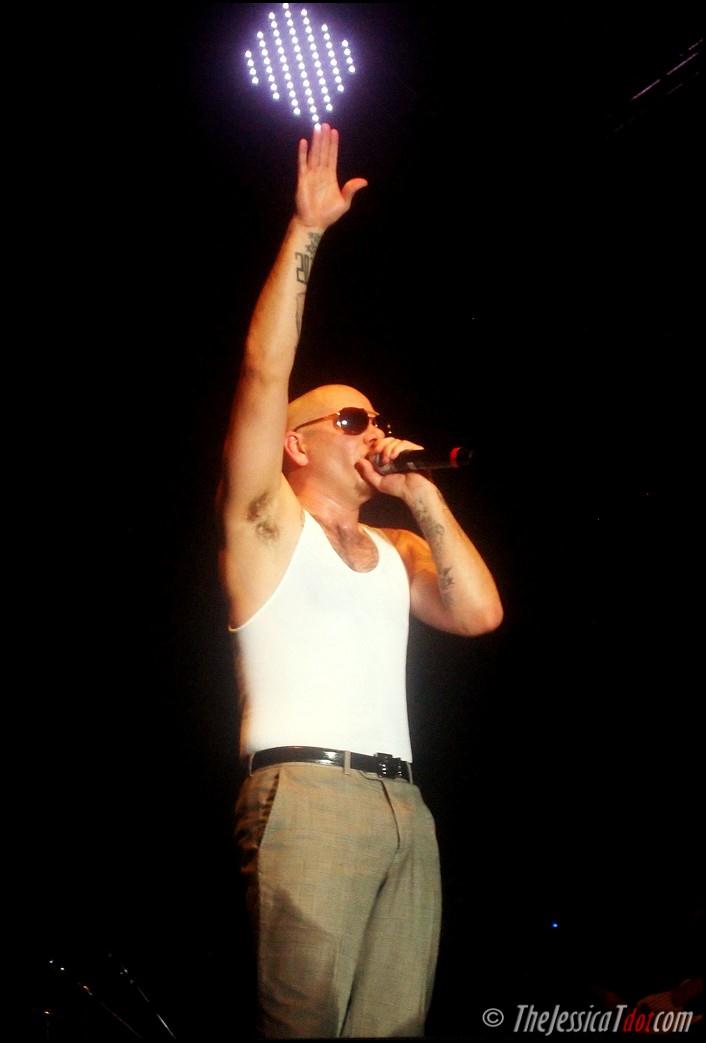 His encore performance was stupendous

Soon after that, was Benny Benassi on the decks. Look at the colorful play of lights and digital effects during his performance! They were all moving in sync with his heavy bass and beats 😀 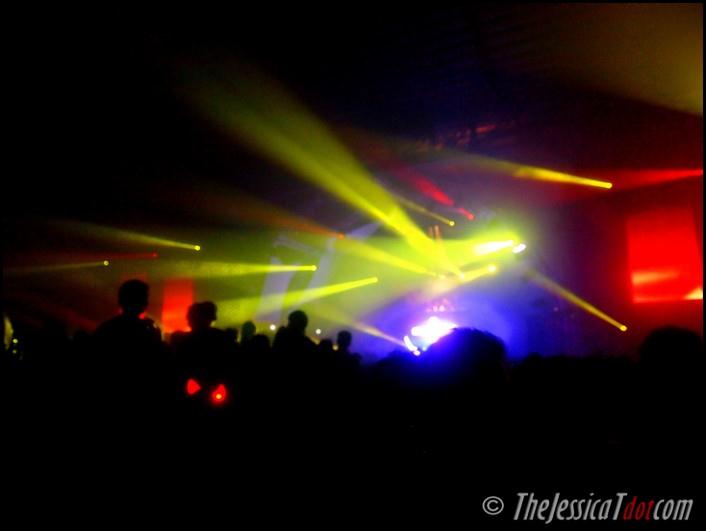 I took some steps back to snap this piccie 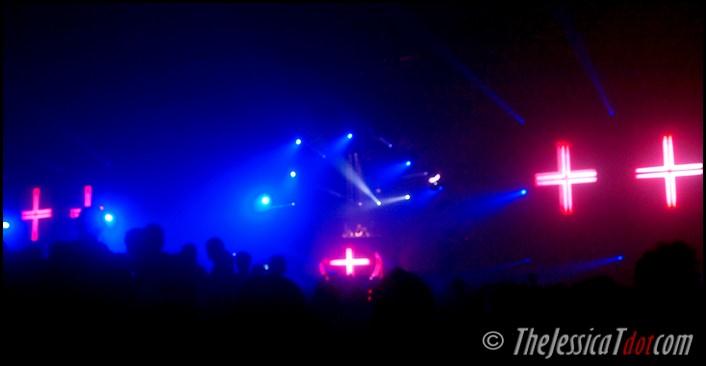 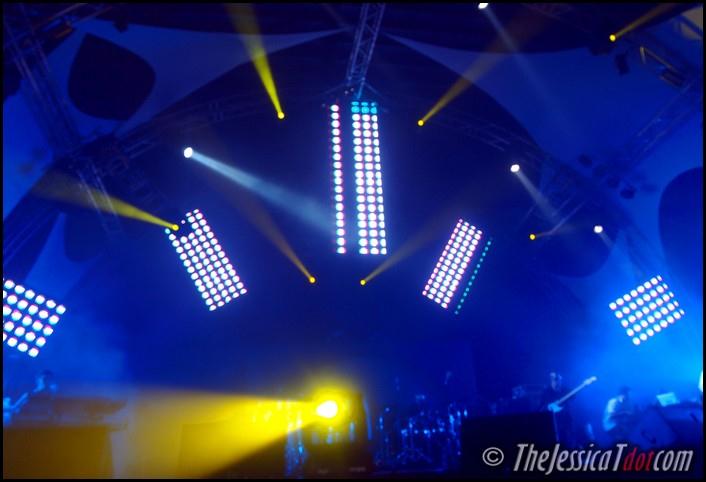 All in the name of Benny Benassi!

Okay sorry no Piccies of our Electro maestro 🙁

But there's a video, no worries! And it's his 'Satisfaction' performance! That should do yeah? 😀

Couldn't stay for Lisa Lashes though, had to adjourn back to reality already. My thesis is due on Monday 🙁 🙁 and I'm 1500 words away from completing it. Gah! 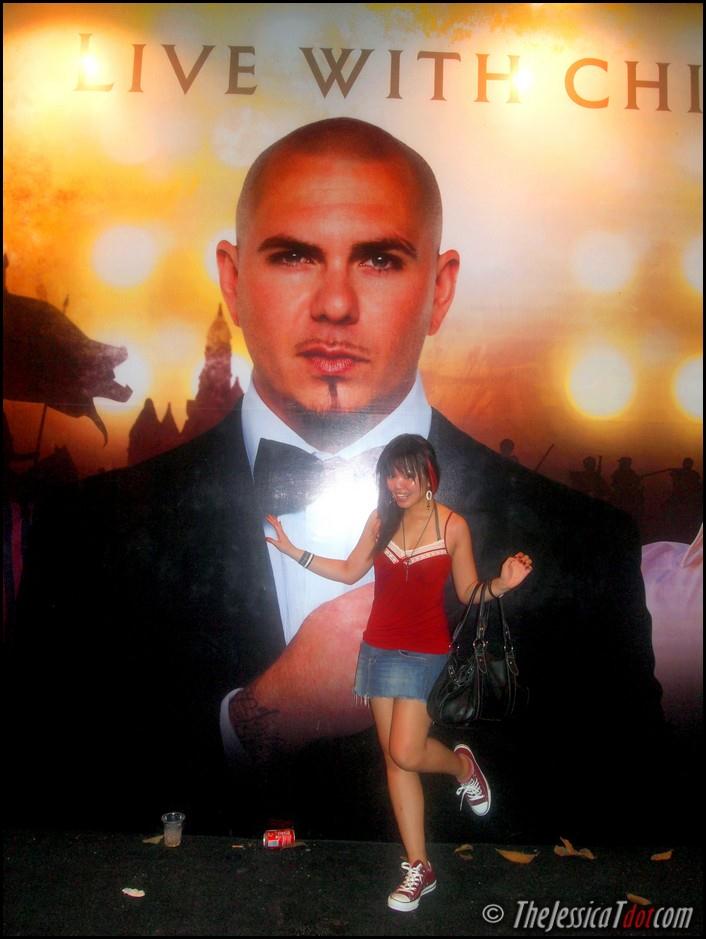 The final shot of tonight!

Forget about your GIRLfriend and meet me at the Hotel Room, Pitbull! 😛