Memoirs of a semi-starved lass ::

I’m feeling so sluggish.
Guess what the bloody time is already? Yeah, 2.25am. Can’t actually get my friggin’ ass to sleep. Partly because-

Well, it’s not like I’m some Jamie Oliver who can just whip out something phenomenal out of a…. ummm.. an egg for example? or even a slice of ham. Just so you know, I’m no cook! But hey, I can simply make toast or chuck anything into the microwave can’t I? NNNNNO! That’s because SOMEBODY has already kept everything away, and refused to replenish all the foodstuff in the kitchen. I’ll be in Ipoh for more than a week that’s why. Pretty reasonable to do that isn’t it? Whatev-
But everything is different when I’m hungry! I feel like walking to any Mamak stall to have my usual ultra-fattening Roti Planta or Roti Telur. *lol* There goes my diet!
Once again, NNNNNO! In my neighbourhood, it’s almost impossible to even walk your dog for a freakin 5minutes without getting marked by potential baddies. So, no can do. *sigh*

Come on.. I can definately redirect my mind to something more worthwhile can’t I? Yeah.. for instance, today. The wedding luncheon of God-knows-who. *lol* Actually, I think I know who. *Draws imaginary family tree* Yeah.. gramms’s brother’s 2nd son. Yup. it was somewhat embarrassing as I couldn’t recognise the bride nor the groom during the tea ceremony.. and neither did mum. Maybe she’s not as bad as I am, for she managed to acknowledge all those wrinkle-tarts that I’ve never even seen before in my entire 17years. Heck, they claimed to have held me in their arms as a child. Oh really?? I shouldn’t trust, lest one might be a serial murderer on the loose. =P

Anyyyyway, mum and I to 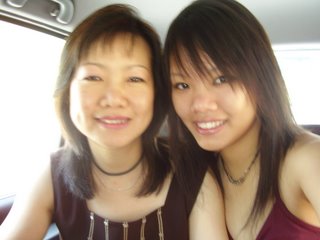 ok some shots here and there. Here’s one by the way… yeah. Nice ain’t it? Luvya mum! Before the wedding ceremony began, jolly Uncle Mike was busy taking pictures of himself! =) *lol* That’s him all over. He’s more of the Ryan Seacrest meets Aznil something (the faggot host of Akademi Fantasia). Yeah, more umm.. how do I put it in a way that doesn’t offend the metrosexual community? Just a little touch on the feminine side, I would say? Mmmhmm.

We have another wedding to attend on the 4th of June ’06 in Ipoh. *groan* Why does everyone seem to be getting married this time around? Some ‘chinesey’ auspiscious date perhaps? I suppose. =/ Heck, I don’t mind anyway! At least my new dress from SUB gets to be utilised! Oh, and speaking of purchases, I bought a scent from Tommy Hilfiger yesterday. Hah.. simply sensual….mmmm. It’s that Beyonce- True Star Gold scent thingythingy. The price was exhorbitant and you can obviously guess what mum’s expression was.. *uh-oh*

Hmm.. lookie here. Half an hour has passed and I’m still hungry. I think I’ll go and ransack the fridge for something edible.